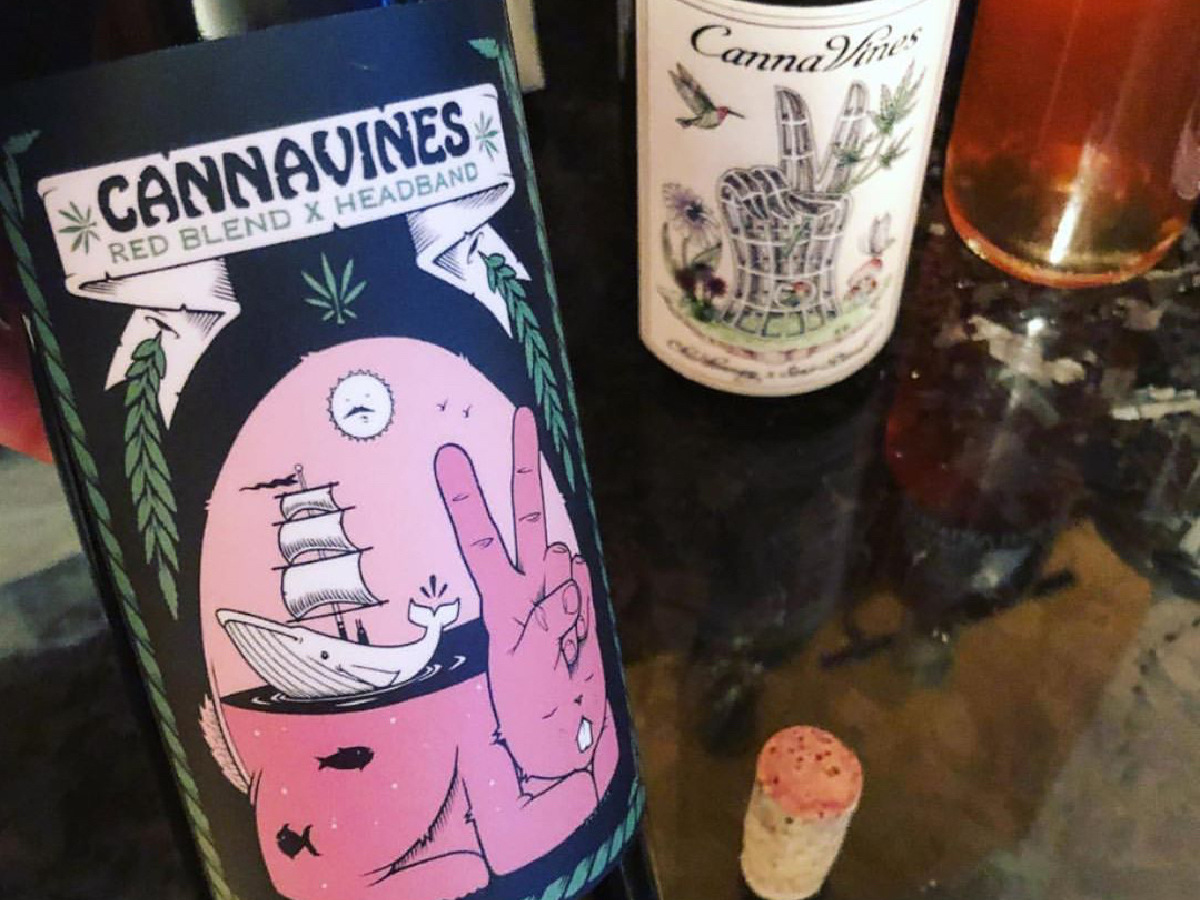 Cultivating flora is arguably the genesis of an organized society, and until such time as we humans find a deeper knowledge, agriculture will remain among our most essential functions. After all, we gotta eat to live.

Over the course of many generations, we’ve also learned how to select and evolve the plant kingdom for more than just sustenance. Indeed, we’ve cultivated healing herbs, spices and seasonings for health, vitality and flavor; dyes, resins and timber for textiles and construction — you name it, we’ve used it for nearly everything since a time that long predates the era of industrialization.

And then there are intoxicants. Counting all the substances on earth, we probably grow as much stuff for stimulating ourselves as we do for nourishment. Two such substances — cannabis and grapes — do both, and we have enjoyed a love affair with these substances in particular for the millennia before distilled liquors and pharmaceuticals came about.

It’s this long-term, multigenerational relationship with plants — as evidenced by the discovery of cannabis wine in ancient tombs, according to Wine Spectator — that will likely bridge the separation between alcohol and cannabis as tools of recreation and relaxation that can be enjoyed together.

Currently, under state limitations, you can’t consume alcohol and cannabis in the same space, nor can you purchase the two substances in the same product. Though psychoactive THC is not typically recommended for mixing with alcohol, it’s nevertheless a combination that has been demanded and enjoyed for eons by consumers of both.

In California, Cannabis Tours is bridging that gap as best it can under current state regulations, with its patented Wine and Weed Tour providing an experience for lovers of both types of intoxicants. Cofounder of Cannabis Tours, Heidi Keyes let Big Buds sit in on one such tour, which runs from Oakland to a winery at nearby Point Richmond in the San Francisco Bay.

Cannabis Tours operates weed-friendly circuits in several states and districts that have legal cannabis regulations — including Massachusetts, Nevada and Washington, DC — but the Wine and Weed Tour is special because, according to Keyes, “In each state that we expand to, we try to add different tours and events that are influenced by the areas we operate in, so the CannaVines Wine and Weed Tour was a natural fit for Northern California.

“As well as [Oakland and the Bay Area] being located close to wine country, cannabis and wine are similar in their growth processes and very complimentary plants,” Keyes continues. “We were already operating Puff Pass & Paint in Oakland, LA and Orange County, but the Wine and Weed Tour is our first tour in California. We will soon be expanding it to Southern California as well as the Bay [Area] and also to Denver.”

Keyes works alongside CannaVines, an up-and-coming cannabis-infused wine brand, telling Big Buds, “CannaVines is not yet available in stores and at the present time you can only taste it on the Wine and Weed Tour. Our current wine contains alcohol and is infused with CBD and terpenes, but we are also working on a product that is alcohol-free and infused with THC, using verjuice from before the fermentation process begins.”

As to whether CannaVine’s dual-intoxication product that contains alcohol and THC will ever legally see the light of day, Keyes explains, “I personally would love to have wine infused with THC, but I understand the regulations in regards to either one or the other. It’s very easy to overindulge, especially on edibles, and feel uncomfortable if you consume too much. The beautiful thing about the CBD in our wines is that it actually helps prevent hangovers and leaves you feeling very clearheaded, not sloppy, as drinking too much wine will often do.”

Ruca Rossi, proprietor of Osceno Wine and Black Fir Farms Collective in Humboldt County, was along for the ride on the Wine and Weed Tour, and her opinion as a cultivator of both cannabis and vineyard grapes has proven invaluable, from a trend forecasting perspective.

“If all the regulations requiring this separation dropped, things would be very different,” Rossi offers. “People are freaking out about CBD wine because it ‘adjusts’ your hangover, and they’re right. I feel like [weed and wine] are cousins and complimentary items. They’re both mild forms of relaxation, and they taste good together, with complimentary notes.”

Ruca Rossi, proprietor of Osceno Wine and Black Fir Farms Collective in Humboldt County, was along for the ride on the Wine and Weed Tour, and her opinion as a cultivator of both cannabis and vineyard grapes has proven invaluable, from a trend forecasting perspective.

“If all the regulations requiring this separation dropped, things would be very different,” Rossi offers. “People are freaking out about CBD wine because it ‘adjusts’ your hangover, and they’re right. I feel like [weed and wine] are cousins and complimentary items. They’re both mild forms of relaxation, and they taste good together, with complimentary notes.”

Rossi sees cannabis wine as something people want now but are unable to have, but she thinks that will change down the road. “The cool thing about cannabis is that it can be anything. It can be popcorn, it can be a beer, it can be a joint, a rub, a bath soak. Alcohol cannot. There’s no other application besides antiseptic. Cannabis can wear every hat. I wouldn’t worry about beverages specifically — it’s going to be in everything. [Cannabis is] here and it’s gonna dominate.” 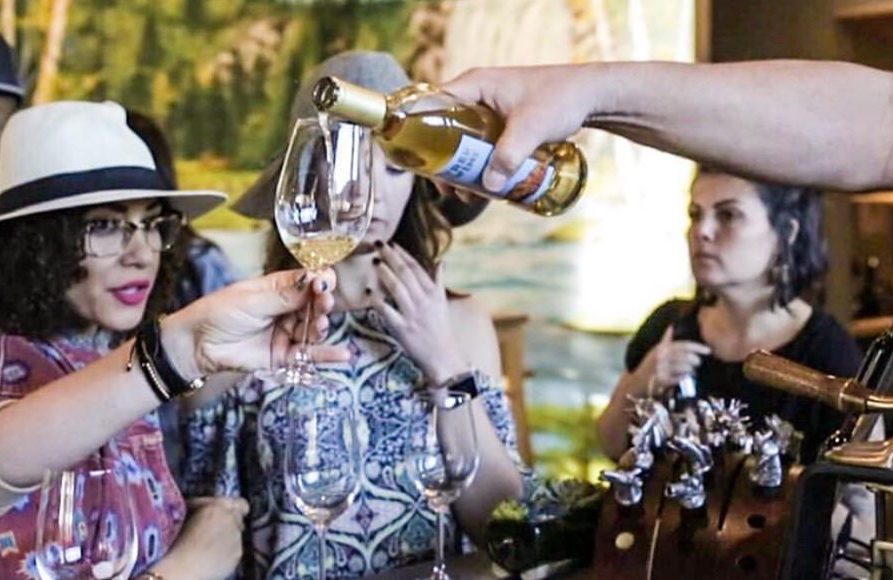 Like Rossi, Keyes also has a love affair with bringing together cannabis and grapes, and that’s clear not only from the care put into her tour, but also her interest in pursuing a weed-spiked wine product. Which is why it’s beneficial that the cultivation processes for the two plants are not mutually exclusive.

“Cannabis and wine have very similar growing processes, and the beauty of both of the plants is the small nuances in their tastes, which can be so easily affected by location, soil, sun, harvest method, and a lot of other small tweaks that an advanced smoker or drinker can subtly taste,” explains Keyes. “I think as time goes on, cannabis and wine will continue to be complimentary plants and products, and consumers will grow to appreciate even more that the blend of both can be very harmonious, in limited doses.”

Growing both crops has forced Rossi to take notice of how the two behave in their environment. “The similarities are definitely in the process, the harvesting, the sorting, the curing,” she reveals. “With cannabis, it’s drying, and with grapes it’s pressing; there’s an urgency [with both tasks] and a similar culture. Once you commit to harvesting, you’re locked in. It needs to be done ASAP.”

And in both cultivation cases, the time spent developing those aromatic terpenes can be honed with experience. Rossi explains, “With wine you’re looking at the Brix, with cannabis you’re looking at the calyxes. These are the indicators that a connoisseur knows well, but a novice can [learn to] navigate.”

While cannabis requires a commitment to the cultivar, Rossi insists grapes allow for some play and creativity in what you’re generating. “With grapes, the final product can be manipulated. With cannabis, you’re locked into genetics and then you have to control the flavor profiles and cure, where all of your smells come out. With cannabis, there’s less leeway, unless you’re making concentrate. They say the best grapes make the best wine, but you can take one grape and make many wines, so there’s more give.”

The Climate And Terroir For Optimal Cannabis And Wine Cultivation

Rossi lets us know that when it comes to a successful harvest, it’s not as simple as planting cannabis where wine already thrives. “Cultivation itself isn’t very similar, but what is similar is the process and organization that you have, which can feel very similar when you’re harvesting and processing.”

Perhaps the No. 1 difference is that cannabis rarely grows in the ground where it’s cultivated. Rossi explains, “With weed, you don’t even use native soil, or you mix native with high-end soils. It requires a lot of water, the root mass is relatively shallow, you have to be attentive to the weed plant every day, you have to manicure it every day — it’s very needy. But grapes are kind of badass and they like rougher conditions, harder soils, expanding roots and finding aquifers. The first years you have to water them really well so that the root mass gets established, but after a few years, you barely have to water them because they find water.”

It’s this excess water that has spurred growers to cultivate cannabis in lush Humboldt County, a region that is heavily forested and that experiences above the national average for annual rainfall. What also makes vineyards there thrive in this multi-climate region are the mild winters and comfortable summers.

Rossi says of this interplay between climate and cultivation, “Grapes are fascinating because they can grow truly anywhere. But cannabis is a little pickier, because of things like bud rot that can occur with too much humidity. Cannabis can handle up to 100 degrees [Fahrenheit] with ease and thrive, whereas with grapes, higher temperatures actually can ruin things. You want to hit the sweet spot, where it’s both hot in the day and cold at night.”

This variation makes for great nuggets, too. Rossi breaks it down: “You want hotter in the day and cooler at night, especially with cannabis, because this is how you can change the chlorophyll from green to purple. When you go high to low on grapes, it’s also very desirable, as people like less sweet wines and more acidic ones these days.”

So, where else in the world does Rossi envisage weed growing side by side with cannabis?

“For me, in the world, I think it’s going to be anywhere like Humboldt, because our water source is very bountiful. We have over 100 microclimates, fresh aquifer water, and we can do so much off the grid. It’s going to be important to consider things more than the end product and how does the land accommodate the water needs of the plant.”

The future of these natural intoxicants is looking beyond ripe, and with entrepreneurial spirit, human innovation and the quest for enjoyment paving the way for this crossover industry, it’s going to be difficult for politics and regulations to keep wine and weed separated for much longer.

Cannabis Tours’ Bay Area Wine and Weed Tour lasts four and a half hours and is priced at $129 per person. The tour includes:

Two Roots Cannabis Beer, A Low-Calorie Buzz Without The Next-Day Regret? Sign Us Up!
The Most Common Problems With Hydroponic Nutrients And Soil Growing, And How Best To Remedy Them