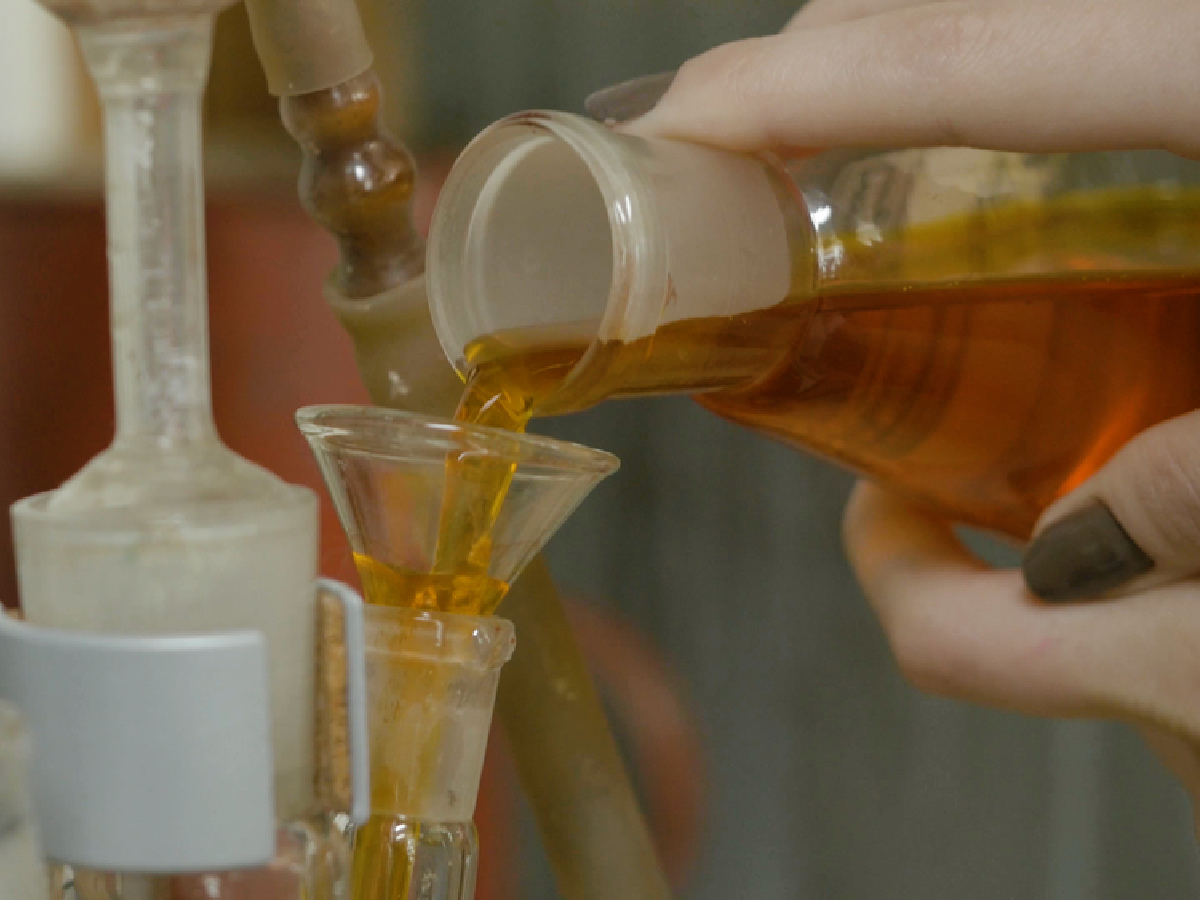 Just a few of the hundreds of beguiling names used to describe to drugs referred to erroneously as “synthetic marijuana.” Containing absolutely no natural marijuana at all, these products are often wrongly associated with pot and produce highs that are nothing like the euphoria found by ingesting the cannabis flower.

Usage of these toxic drugs has steadily increased throughout the world since the early 2000s, proving fatal in some cases, creating a public health crisis for medical professionals, and a recurring nightmare for drug policymakers.

Reports of the drugs’ users over the years have included freakish encounters ranging from zombie-like figures plodding through urban centers, to individuals sprinting naked and wailing through suburban backyards. Cops and ER doctors nationwide have found themselves confounded by the uptick in events on the streets and in hospitals, responding to calls for unruly people high on the substances who exhibit superhuman strength and downright insane behavior.

Much of what fuels this synthetic drug craze is its widespread availability and the misperception that it is akin to, and as safe as, weed — which couldn’t be further from the truth.

First gaining popularity among US consumers around 2008, with names like Spice and K2, at the time it was pretty difficult to find a gas station, head shop or liquor store that didn’t stock the stuff behind the cash register. It was available to anyone and everyone, with manufacturers claiming that products were “not for human consumption,” thus allowing these synthetic products to remain on shelves in a legally murky zone.

Peddled brazenly to consumers with a wink and a nod under the guise of incense and potpourri, these toxic concoctions have included chemical amalgams that change so rapidly and regularly, the Drug Enforcement Administration can’t keep up with manufacturer recipes, unable to classify each one fast enough to label them as illegal drugs.

“The contents and effects of synthetic drugs are unpredictable,” reads a DEA report, “due to a constantly changing variety of chemicals used in manufacturing processes devoid of quality controls and government regulatory oversight.”

The National Center for Biotechnology Information (NCBI), a government body set up to advance science and health by providing access to biomedical and genetic information, refers to these substances as “synthetic cannabinoids” rather than the often-misused “synthetic marijuana.” The NCBI notes that the number of “intoxication calls to poison control centers increased by 240 % between 2010 and 2011” and accelerated again “by a 330 % increase in calls to poison control centers in 2015.”

The confusion and conflation of these harmful synthetic drugs with ordinary marijuana comes when politicians, the public at large, and users of the drug (as well as careless media outlets) confuse the man-made synthetic cannabinoids in products like Blue Berry Yum-Yum with that of the naturally occurring compounds found in cannabis strains like Blueberry Kush or the similarly named Blueberry Yum Yum hybrid strain.

One makes you utterly crazy and can kill you; the other makes you happily high and has seen not one recorded fatality to speak of.

Both intoxicants have ingredients that interact with the human endocannabinoid system and produce the psychoactive high users feel from THC, which interacts with the body’s central nervous system receptors. Synthetic cannabinoids, however, often have characteristics, says the NCBI, that “can differ considerably from THC” by binding to those receptors with a “higher affinity and efficacy.”

As such, says the report, “these compounds elicit different behavioral- and physiological-effect profiles relative to THC,” meaning the overly effective rate of synthetic THC acting on the brain far exceeds the potency of naturally occurring THC on the brain. Hence the lunacy inherent in the synthetic experience over the calm experience of the natural one. 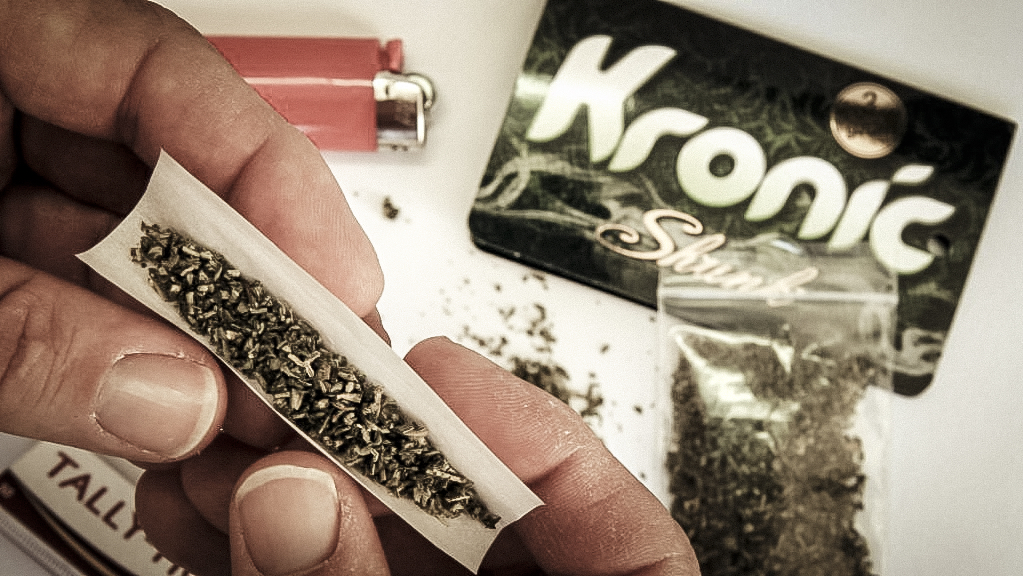 Seizures, paralysis, psychotic episodes and aggression have been reported by those who have taken synthetic weed.

Counterfeit Cannabis, A Prescription For Disaster

Earlier this year, the DEA finally made some headway placing six synthetic cannabinoids used in a variety of synthetic drugs like Spice into the Schedule I federal designation. The substances in that category — which include heroin, cannabis and LSD — are considered intoxicants with no currently accepted, positive medical use and a high potential for abuse.

Northern California headshop owner Mark S. is happy to hear that drugs like Spice will no longer be legal. He admits once stocking a version of synthetic cannabinoids in his store, but after trying a bit himself was completely turned off by the drug.

“The experience was not good at all,” he remembers. “It was nothing like the effects of marijuana. It felt violent and nightmarish.”

Mark says the branding of those products turned him off as well, saying he disliked the use of “cartoon characters, as if they were selling cereal. It’s a really criminal kind of marketing for such toxic stuff. It clearly was meant to appeal to teenagers.”

Special Agent Joseph Macias, who works for Homeland Security Investigations in Los Angeles, confirms that notion in a DEA notice: “The packaging and names associated with analogue drugs might lead some impressionable users to believe these substances are benign, but the reality is they can cause serious health complications and even death,” he says. “Couple that with the fact synthetic drugs are often marketed to young people and you have a prescription for disaster.”

If You Work Construction Or In Finance Or Tourism, You Don’t Have To Switch Careers To Enjoy The Canna Boom
The History, Grow And Effects Of Heritage Marijuana Strains Power Plant, Hash Plant & Night Queen