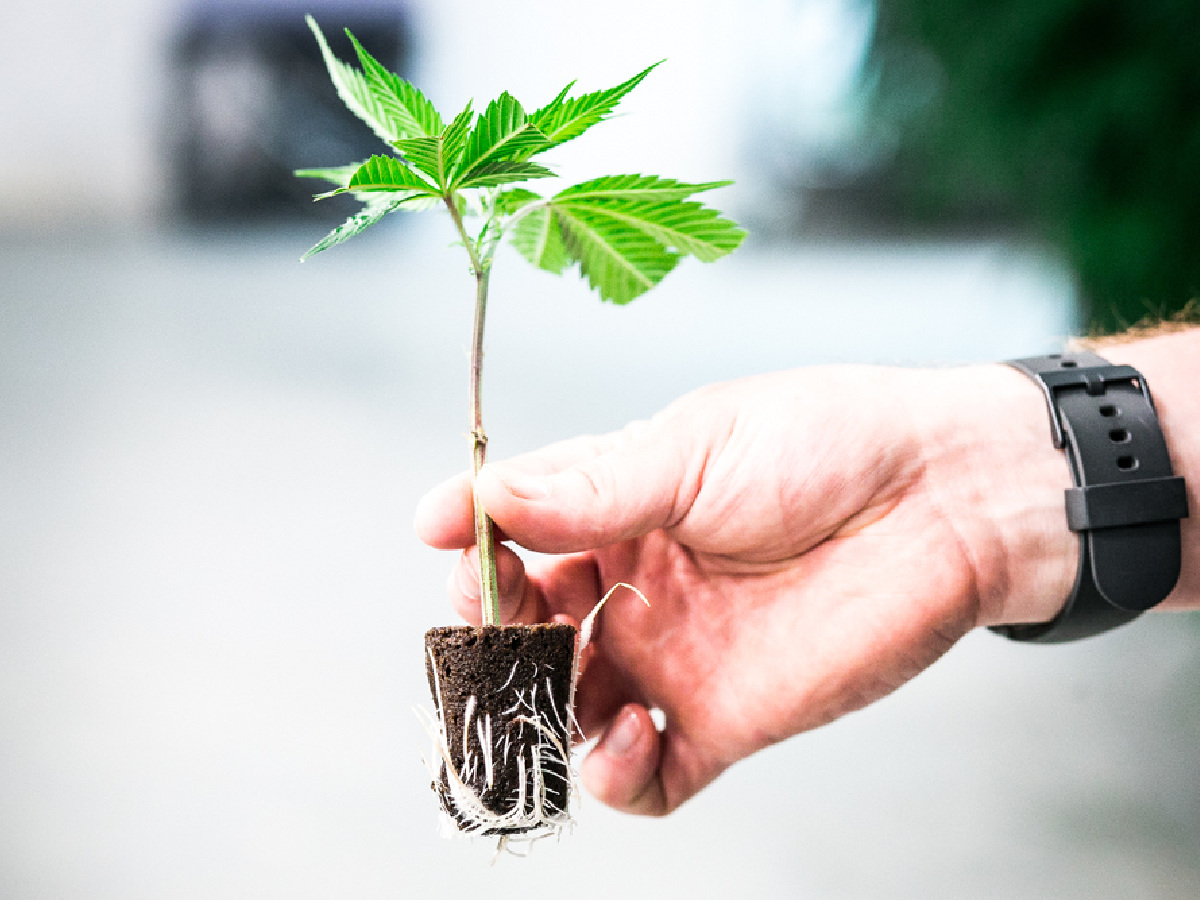 Adding dissolved oxygen to your water supply will give you whiter, more massive roots.
By Neil Moran | Published: October 21, 2018

So, are you on the dissolved oxygen (DO) bandwagon, or are you still babbling about bubblers? If you fit into the latter category, don’t feel bad — at least you’re adding some oxygen to the water you’re giving to your cannabis crop.

“It’s better than nothing,” says Dennis Clark, founder and president of Oxygen Research Group, suppliers of supplemental oxygen technology. Clark explains that you can have 2 parts per million of dissolved oxygen coming out of a well, and with a bubbler you can raise the DO level up to 8 ppm, which is sufficient for plant growth.

However, you could be doing better. Choosing to add dissolved oxygen to your grow is like choosing a BMW over a Kia.

“But what if you got 12 ppm?” Clark asks. “That’s when you start to notice the difference.”

The difference, according to Clark, will be particularly pronounced in the root system of the plant. Expect whiter, more massive roots, which of course, is the foundation of good plant growth. Healthy roots mean bigger buds and ultimately better yields. It also means less issues with the root nemesis, pythium-induced root rot.

The Problem With Using Bubblers In Your Grow Op

As mentioned, using bubblers and air stones is, in fact, a way to increase the DO of your water. However, it is not as efficient as having a system that uses electrolysis to deliver higher concentrations of DO.

But what if you added more bubblers?

Well, for one thing, the noise level would go way up, along with your electricity bill. Also, you’re limited to how much DO you can draw in this way. Clark says when the bubbles break the surface of the water, some DO is pulled in and captured. Problem is, the source of air that a bubbler draws in is only 21-percent oxygen. Pumping more air through air stones doesn’t increase the DO.

“Bubbles are just the air you and I breath,” says Clark. “The air we breathe is 21-percent oxygen, the rest is nitrogen.” The other problem with bubblers is they often draw in the warm ambient air from a grow room, which could in fact be a grow tent or closet. Oxygen levels are maintained at 65 degrees Fahrenheit and lower, according to Clark. Anything above 65 F and oxygen levels will diminish. Some growers add chillers, which like adding several bubblers, increases energy consumption.

Clark says studies out of the University of Minnesota and the University of Wisconsin have proven that nutrients are utilized most efficiently at a DO of 10–12 ppm. Companies like O₂ Grow and O₂Tube Technologies manufacture systems that utilizes electrolysis to add DO for hydroponic-, peat- and coir-based grow systems to achieve these levels.

The electrolysis cycle, as Clark explains, produces a 100-percent pure oxygen nano bubble by converting the oxygen molecule to a gas. When it is reintroduced back into the same solution, it raises the DO by 50 percent. It’s a quiet, energy-efficient way to increase oxygen in the soil that in turn greatly benefits the plants you’re growing, whether it be marijuana or marigolds.

Other mainstream companies, like Dramm Corporation, are also seeing the benefits of adding DO to water, and are in the process of rolling out equipment for small- and large-scale licensed producers.

“We started paying attention to dissolved oxygen,” says Kurt Becker, director of commercial products sales and marketing at Dramm. “We saw incidences where customers were having growth problems and they had nothing to attribute it to — they just had issues. It turned out in many incidences they had really low dissolved oxygen in their water, but nobody was even paying any attention to it.”

When it comes to recognizing the importance of DO in horticulture, Becker draws a comparison from 50 years ago, when he says growers started taking notice of electrical conductivity (EC) in the soil.

“We knew if we added fertilizer, it helped the plant grow. Optimizing EC, though, has resulted in huge strides in plant productivity,” he says. “The same can be said for pH. Adjusting the pH to the right level will result in better uptake of nutrients and a healthier plant.” He claims similar gains will occur if you measure the DO in your water and make the necessary adjustments.

“Now, we understand that dissolved oxygen is the third measurement that people haven’t been paying attention to,” Becker adds.

The only way to know what parts per million you have of DO in your water is to obtain a dissolved oxygen meter. And although this technology isn’t entirely new, it would appear that a lot of growers still don’t measure DO or take the necessary steps to bring up DO levels to a point where it can be most beneficial for plant growth.

“Most growers know and understand the need for correct pH, EC and dissolved oxygen levels,” says Clark. “But very few have the appropriate tools to measure DO.

“I hardly find two growers that do things the same way,” he continues. “So, you have to learn about your own water; it might be one thing in Detroit and may not be the same in Nebraska.”

Perhaps one reason for growers’ hesitancy to measure DO is that these gadgets can be pricey compared to a pH or EC meter that can be picked for as little as $30. Also, as with any new technology, there is a steep learning curve. Companies like Hanna Instruments sell DO meters starting at $295 and provide video training on how to use them. Like anything you buy, the more you shell out for a DO meter, the more features you can enjoy, such as automatic calibration.

“People can be overwhelmed by the technology,” admits a company spokesperson at Hanna Instruments. “The videos make it less intimidating.”

At the end of the day, it’s like what they ask in those annoying Capital One credit card commercials: “What’s in your wallet?” Growers need to ask themselves, “What’s in my water?” 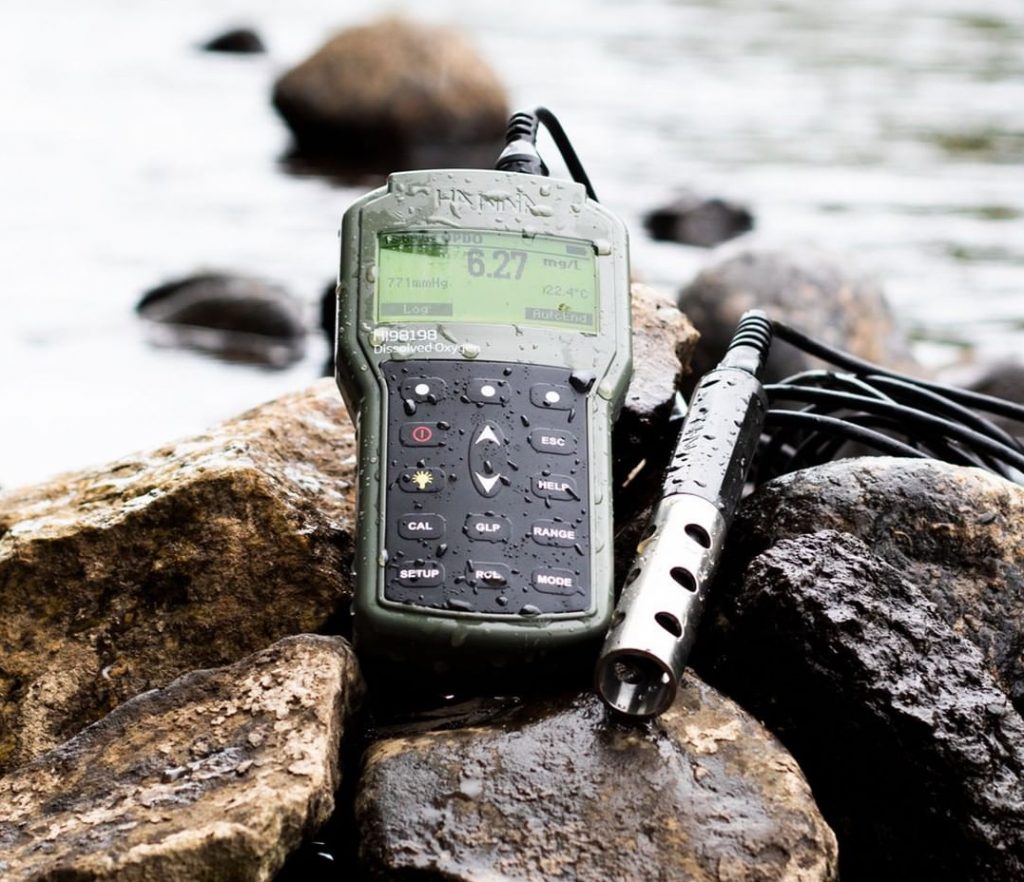 According to its website, Hanna Instruments’ Optical Dissolved Oxygen Meter doesn’t require a minimum flow rate, so there is less drift in your readings. Retails for $1,450.

Sonja Maki was one of those research scientists who noticed better root development and overall plant growth in a study she conducted with graduate students at The University of Tennessee. “We had been noticing poor root development in two of our hydroponic settings,” says Maki, Ph.D. and assistant professor at the College of Agriculture, Food and Environmental Sciences at the University of Wisconsin-River Falls. “We were trying to improve plant growth in a vertical green wall and an NFT [nutrient film technique] system; we noticed the DO was pretty low at 5mg/L. We tried adding air stones and it didn’t help too much.”

Maki says she conducted an experiment with an undergraduate student using crown peas grown in an NFT system in a greenhouse. “We chose the crown pea, a determinate plant, because they also grow wide at the top and produce a lot of flowers,” she says. They conducted experiments using a control group and the patented O₂ Grow technology, and noticed a marked difference in growth in the experimental plants.

“The main takeaway is, after we grew the crown pea in the experimental group, we noticed better root growth and taller plants; they also branched significantly more with the oxygen.” She says the roots of the plants in the control group were “brownish and the lateral roots terminated prematurely,” while those in the experimental group had longer roots and better weight. Using a 3-in-1 meter that also measures pH and EC, Maki says they achieved about 8 mg/l of DO in the water the plants were growing in. She acknowledged that there are other ways to achieve higher levels of DO in the water. However, this system offered a relatively low-cost method of improving root development and overall growth of the plants.

Ozone In H2O For A High-Yielding Cannabis Crop

Not to be confused with the effects of a Kush high, ozone (O3) is a potent and efficient oxidizer that, when added to an irrigation system, will keep the pipes clean by oxidizing organic material and biofilm in the water. So, what does it have to do with dissolved oxygen? Clean pipes place less demand on oxygen, which helps maintain higher levels of DO. More importantly for cannabis growers, O3 is 13 times more soluble in water than O2, allowing higher levels of oxygen to be dissolved in water. According to Becker, higher levels of dissolved oxygen can be maintained in an irrigation system by adding O3. Quite frankly, these systems are expensive and perhaps not something you need to purchase right away. However, for large-scale growers and licensed producers who want to stay competitive, it may be something to look into.

To conclude, adding dissolved oxygen and ozone could be just the ticket for better root development, shorter cropping time and ultimately, bigger buds. Meters are relatively inexpensive, but the technology to deliver these gases, particularly ozone, can be expensive. Cannabis cultivators need to look at the cost of the various units and determine which ones will deliver the best return on investment for their grow op.