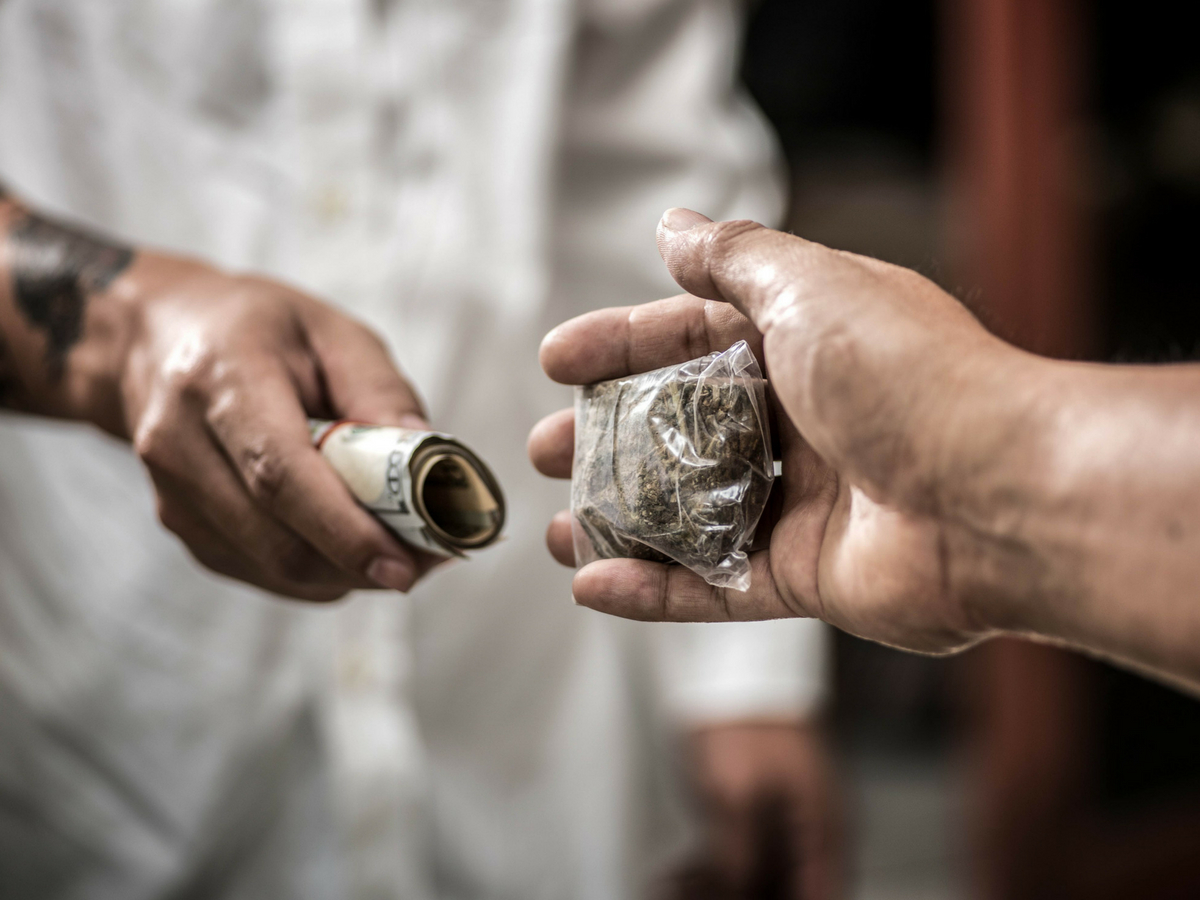 Pro-cannabis advocates for years have pitched legalized marijuana as a means to the end of the black market. As the plant is taken out of the shadows and put into the hands of licensed vendors under stringent state regulations, advocates say that having trusted outlets to legally purchase cannabis will effectively eliminate the need for consumers to buy from street dealers.

But as the industry has expanded over the last several years, a binding combination of high taxes on sales and restrictive regulations — like plant-testing standards and store license limits — has paved the way for illegal dealers to not just survive, but flourish.

California has long been America’s hub for domestically grown cannabis. With thousands of pounds produced annually in the black market, a gigantic surplus of the plant has lowered the price of a pound to pennies on the dollar — as low as $20 per pound, if some reports are to be believed.

Comparatively speaking, a legal dispensary sticker price for the equivalent of that much weed would range from $4,000 to $6,000, if bought separately at the legal limit of one individual ounce per day. While many California dealers still today couldn’t give away that much weed in the Golden State, they’re now able to market and sell it for more than ever in neighboring marijuana-legal states Nevada, Oregon, Washington and Colorado.

Nevada, California’s closest neighbor to the east, has been hit arguably the hardest.

“Every state in essence wants to get rid of illegal sales, there’s no doubt about that,” says Sgt. Randy Dockery, a narcotics enforcement officer with Las Vegas Metropolitan Police. “But the reality of these good intentions has been just the opposite.”

While Oregon and Colorado have opened their legal cannabis markets to hundreds of dispensaries, Nevada and Washington have limited recreational state licenses to mere dozens in an attempt to closely monitor and regulate the fledgling legal industries. That restriction, as well as high state taxes on sales of the plant and costly required laboratory testing standards, has made legal cannabis not only costly, but exclusive, Dockery explains.

With thousands of pounds’ surplus of naturally grown cannabis, many illegal California sellers need less than four hours to drive, set up shop and start dealing in Las Vegas. Now, instead of sneaking sales at locally licensed cannabis events, like the High Times Cannabis Cup and Viva Las Hempfest, the California dealers host pop-up markets in Sin City, dealing their product to unsuspecting tourists who think such sales are legal. Such marketplaces often take place in warehouses across the Las Vegas Valley, lasting just hours, before vendors count thousands of dollars in earnings and head home.

Perhaps most telling of the surplus cannabis conditions in California, Dockery says his narcotics team has discovered up to 15 pounds of cannabis casually left behind by sellers at the illegal markets. That quantity, which would cost $60,000 to $90,000 if combined and sold at a dispensary, is insignificant enough at California street prices for illegal dealers to leave behind.

“It just shows how much extra marijuana they have there,” Dockery says of California. “They’re literally just waiting to unload it in Nevada, and our current marijuana laws have made it easier than ever for them.”

Washington has had a similar problem. Steve Morehead, an enforcement officer for the state’s liquor and cannabis board, says crimes related to illegal cannabis distribution have tripled since legal recreational sales of the plant kicked off in 2014. While the state receives a large influx of illegal cannabis and dealers who make their way up from California, local sellers of homegrown weed on the Washington coast and rural areas have undercut a market whose dispensary licenses are limited and whose tax rate ranges around 40 percent on sales of the plant.

Such apps — used to cross-list products that sometimes also appear on more easily tracked public platforms like Craigslist, Facebook and Instagram — have made tracking criminals “more difficult than ever,” Whitcomb notes. Besides selling flower and other cannabis products, illegal dealers advertise delivery services, posing as legal dispensaries to buyers who often don’t know any better.

“The sellers know what they’re doing is wrong, but sometimes the buyers don’t,” Whitcomb reveals. “We try to tell people the best way to avoid the confusion is buy only from dispensary websites or in person at the stores.”

Surplus cannabis in California’s black market has made a slightly smaller impact in Oregon and Colorado, where recreational cannabis has been legalized the longest, thanks in part to a greater number of license holders legally growing and selling. Of Oregon’s roughly 400 operating recreational cannabis dispensaries, as many as a dozen change hands on a monthly basis and an additional three to five close for business, while four to six begin operation for the first time, according to the Oregon Liquor Control Commission.

The OLCC, which oversees licensing and regulation of the state’s recreational marijuana program, believes a comparatively lower tax rate than other cannabis-legal states and stiff competition in Oregon’s legal market has helped push out black-market dealers. OLCC spokesman Mark Pettinger claims that most of the competition is happening in the legal market, and as demand for licenses have moved toward a plateau, so have dispensary prices.

But while cannabis is a cash-only business and remains illegal under federal law, late-hour robberies and overnight burglaries have become more prevalent, according to an Oregon State Police rep. Every day, Oregon authorities respond to nearly a dozen calls related to criminal activity at cannabis dispensaries, police spokesman Lt. Bill Fugate says, and make about five daily arrests related to illegal sales of the plant.

Ditto for Colorado, who despite having the country’s first recreational cannabis program, is still fighting “too frequent” robberies, says Shannon Aulabaugh, spokeswoman for Boulder Police Department. Indeed, 38 Colorado cannabis facilities have been burglarized or robbed so far in 2018, according to the Colorado Department of Public Safety. And while all of the criminals were immediately caught and apprehended by police thanks to video technology and specialized alarm systems, the fear faced by dispensary staff, managers and sometimes even customers has been one of the few setbacks in an otherwise successful industry, Aulabaugh says.

“Between the cash and the marijuana products, these dispensaries are frequently targeted because of the value of what’s inside,” explains Neil Demers, CEO of Denver-based dispensary Diego Pellicer. “The only solution is declassifying it on the federal level so there’s more access to banking and less cash on hand.”

The only state not drastically affected by legalized, albeit restrictive cannabis sales lies 1,500 miles north of the continental United States. Officials in Alaska say legal cannabis for the largest US state by land mass has been “largely successful.”

With only 65 licensed dispensaries in Alaska and by far the coldest climate, the state is easily the most difficult environment in which to grow cannabis, even indoors, says Cary Carrigan, executive director of the Alaska Marijuana Industry Alliance. Its distance from California — and even the closest Canadian cities — make transportation of the plant less feasible. Large-scale robberies are fewer and further between, Carrigan adds, though nearly all of the state’s dispensaries have reported some kind of theft since 2016. But a high taxation on the industry — growers pay $50 per ounce of cannabis bud (about $800 a pound), and $15 per ounce stems and leaves used for edibles — has allowed the black market to stick around.

“Illegal marijuana is a big problem for the legal industry as a whole,” Carrigan says. “And it hurts everybody.”