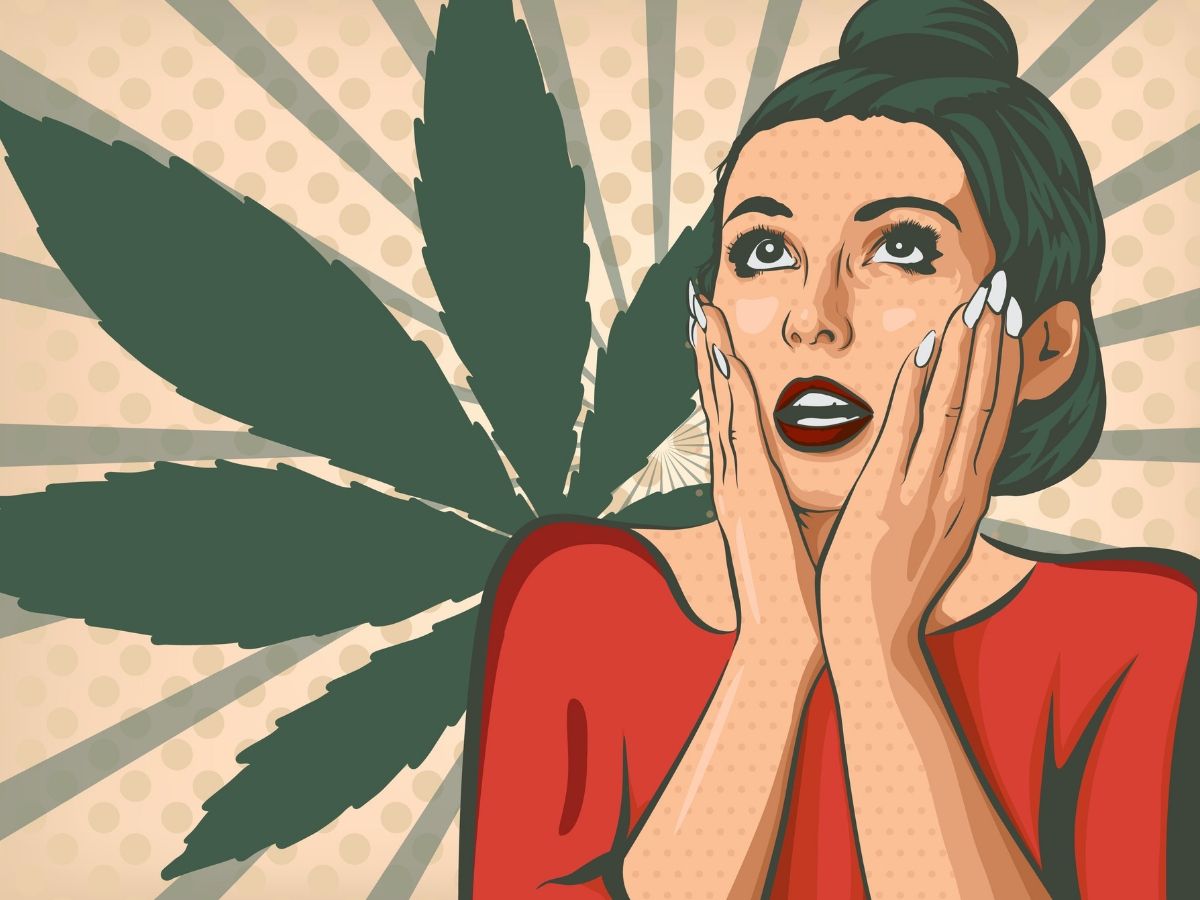 As cannabis legalization continues to sweep the United States, it’s become commonplace to find folks being more open and forthcoming about their consumption of this therapeutic plant. After all, in some states, you can walk into a dispensary as easily as a liquor store, and minutes later walk out with a joint to spark up on your porch. Yet, for some, the stigma surrounding the plant remains, as women in particular — i.e., those that consume cannabis and those who work within the industry — are still finding themselves trapped in the “green closet.”

Watchdog organization Cannabis Consumers Coalition says that more than 58 percent of all cannabis users are women, but the fact that they are in the majority doesn’t necessarily translate to openness and visibility around their use of the plant. Why is that?

Van der Pop, a female-focused cannabis company that, according to its website, acts as a “guide to help women discover and pursue new paths to self-care and happiness,” recently released the Women & Weed Survey, which examines the relationship between women and cannabis. And the results point to what many women already know: Due to the persistent stereotypes surrounding cannabis users, women feel as if they have to hide any use or association with the plant. Seventy percent of those surveyed said they believe that cannabis consumption carries a stigma, while 66 percent of those surveyed said they hide their consumption.

A lot of the stigma is related to gender norms (and the stereotypes associated with them), as many who responded to Van der Pop’s survey noted concern over looking like a “bad mom,” because of cannabis use, something that doesn’t seem to follow around men in their role as fathers. Women are placed in the caregiver role in our society, and anything that may negatively impact that automatically leads to judgment. It seems, based on the surveys and stories, that despite its overall progressive nature, the cannabis scene is not immune to these patriarchal ideals.

It’s no surprise, then, that average, everyday women feel the need to hide their cannabis use when even women within the cannabis workforce are being negatively called out for their involvement in the industry. Some women (particularly mothers) fear being reported to child protective services if word about their employment gets out, because of the myths and stereotypes surrounding cannabis. Between this persistent stigma, as well as lack of access to funding now that larger corporations are finding their roots, the surge of women leaders that came with the early onset of the cannabis industry is now starting to wan, according to the Stamford Advocate.

“I always approach talking about my new business carefully, with people not in the industry,” says Aliza Sherman, CEO of Ellementa and author of Cannabis & CBD for Health & Wellness, “because I still don’t know who has experience, or has strong opinions one way or the other. And I’m still afraid of alienating people, or being judged.”

Sherman strongly relates to other mothers in the cannabis industry, as she says it feels like straddling two worlds. “I have one foot in the ‘I’m a loud, proud, cannabis business owner’ [world],” she says. “And the other foot in the, ‘Oh my God, I’m a mom, I’ve got a teenager, a preteen, a baby, and a husband who doesn’t do this. I’m nervous, what if the kids catch me, etc.’ I still look over my own shoulder in my own home.”

It is this uncertainty that requires those in positions of power to share their stories when it comes to cannabis. “It’s risky to be attached to anything in this industry,” says Andrea Brooks, CEO and co-founder of Sava, a curated cannabis goods company. “But I strongly feel it’s necessary to be relatable — to show there’s a real person who cares behind the company.” As a female CEO in the industry, it’s important to Brooks that she remains visible. “I believe people need to see representations of themselves to feel comfortable.”

Lisa Snyder, founder and CEO of female-centric global cannabis community Tokeativity, agrees with Brooks, but, like Sherman, she understands the hesitance of some women. Snyder identifies as queer, and for her, it almost felt like a second coming out when she became vocal about her career. “Initially, I didn’t tell anyone I was involved with Tokeativity,” she says. “I left it off of the ‘about’ page completely, because what we were doing was edgy and I wasn’t sure how it would be received. After about six months of working with Samantha, creating spaces for women to connect and consume, along with a curiosity from the media about our work, I tapped into my queer roots and found bravery once again to come out of the green closet this time.”

Snyder says that understanding the coming-out process from both a queer and cannabis consumer/industry leader perspective has helped her to “create bridges for other women who have been blowing smoke out their bathroom window alone for years or the only token lady with a group of dudes.”

When it comes to diversity, which can help break down stigma, the cannabis industry isn’t doing so well, with black women in particular feeling the brunt of it as they stand at the intersection of race and gender, according to News One. Despite the fact that the percentage of female CEOs in the cannabis industry is higher than in the business world overall, the initial inclusion and growth is no longer happening as quickly as it once was.

Women Grow, an organization that connects and supports women in the cannabis industry, partnered with New Frontier Data in 2017 to create a first-of-its-kind study about diversity in cannabis. While 57 percent of folks who responded to the survey reported that at least half of the ownership positions at their companies were filled by women, this may no longer be the case.

According to Women Grow executive vice president Gia Morón, “In the two years since that study, more and more cannabis businesses are starting to shift from entrepreneurial to more corporate structures as big-money investments increase. As this is happening, we are seeing more men leading companies and assuming positions once held by women, thus diminishing our voice and perspective.”

Some women, like Tokeativity’s Snyder, are done with how women have been treated for centuries, and how stereotypical sexist behavior persists, even in the nascent cannabis industry. “There is a witch burning that happens at almost every turn when a woman does not perform as we expect or hope,” Snyder says, explaining the cycle of publicly shaming women. “We baby and forgive men for all their imperfections, help make them feel more comfortable and at ease at every turn, and are expected to be their emotional jock strap.”

When it comes to breaking down the stereotypes, Brooks reiterates the importance of sharing your story and being visible. “My goal — and my advice — is to raise other people up with you, share stories and put yourself out there,” she says. “Combat the stigma every day. If you are in this business, you are an activist and advocate by default. Get out there and educate and do the work.”

While visibility is important, more is needed. One important aspect for Snyder is education. “We need to teach women how to build their own resources and lean into networks,” she says. “Resources give structure and access to life’s needs and networks give access to social commerce, which cannot be bought or sold. [We also have to] teach women how to access capital. These conversations will begin to change when the table of decision-makers is more diverse, and women get their needs met because they did it themselves.”

Morón agrees. “Finding a mentor and a community of support are wonderful tools to combat the stigma,” she says. “It is important for women to know that they are not alone and have access to a support system — including mothers, who can feel especially isolated because of child services and custody issues. That’s how organizations like Women Grow, whose mission involves connecting through networking and education, can be of service to women entrepreneurs and women who are leading businesses in cannabis.”

For Snyder and others, access to capital is a big part of how the industry can better include women. “We need to frame conversations into a financial perspective in order for anyone who has a seat at the table to actually listen,” Snyder explains. “We need to tell decision-makers that the open road to increasing revenue for their company is leaning into and creating products for those who hold the power and the purse strings in their household, and those people are women.”

Until these things change, some women will continue to feel as if they need to hide within the industry. While change may not happen overnight, the cannabis industry has the chance to show that it is truly progressive by widening their scope when it comes to women.

What We Know — And Still Need To Learn — About Cannabis Bioavailability
Chemo, Radiation And Cannabis? Studies Exploring The Plant’s Potential As An Effective Treatment