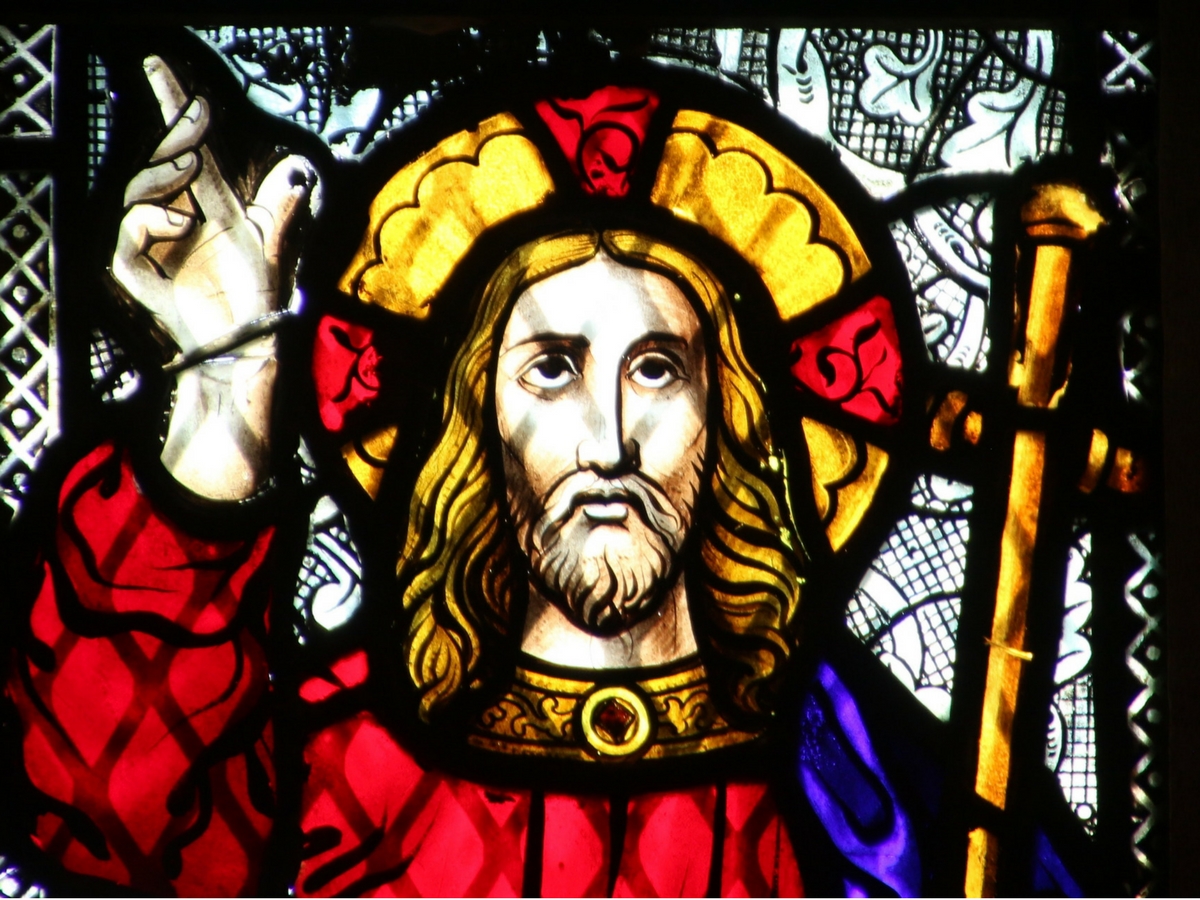 If there’s one thing the internet is good for, it’s delivering a plethora of theories linking Jesus with weed. Though there’s no definitive evidence that JC liked to get lit, the idea is certainly a fun one to entertain. There’s a reasonably strong argument to be made that the anointing oil Jesus used when curing the sick was laced with cannabis (potentially giving scientific credence to his healing abilities). Old Testament scriptures about “green plants” and “a plant of renown” given as gifts from God are believed by some scholars to be early references to cannabis.

When the tree of life is mentioned in the Book of Revelation, it is said that “the leaves of the tree are for the healing of the nations,” which could be interpreted as sugar trim at any stoner bible study. (Yes, such a thing exists.) Rastafari is a branch of Christianity that views marijuana as a sacred herb, evoking a spiritual communion with the Lord when smoked.

So, is it really that difficult to imagine Jesus passing a fatty around with his disciples when sailing across the Sea of Galilee?

Much like Homer Simpson’s stoner question, “Could Jesus microwave a burrito so hot that he himself could not eat it?” we’ve gathered together a pair of renowned budtenders to ponder the question: If he had access to today’s cannabis offerings, what would Jesus smoke?

Other than a few minor details, the story of Jesus’s life begins when he is blessed by John the Baptist, after which he retreats into the wilderness to fast for 40 days and nights. Despite Jesus’s long hair and sandals, this was no Burning Man luxury glamping. He was starving in a barren wasteland, all the while the devil was constantly bugging him with a bunch of ethical conundrums.

A couple tokes off a fig leaf joint would surely hit the spot just then. But what strain would help Jesus maintain his inner compass in the face of temptation, while simultaneously helping to curb his appetite?

“Jillybean is a very stimulating, cerebral high, but without the typical munchies that many strains cause,” says marijuana critic Sohum Shah. “I often feel less hungry and more mentally stimulated after I smoke a joint of the Jilly, which would be perfect to help JC resist the devil’s temptation, but not the devil’s lettuce.”

Jesus became quite ambitious when he returned from the wilderness and began his ministry. It was a demanding regimen of traveling, sermonizing, brunching with tax collectors, and having his feet washed by sinful women. Seeing as Jesus was broke and homeless, he was probably crashing on a lot of floors and couches (or the first-century equivalent of a couch). This likely made sleep difficult, which can be hazardous when you’re expected to deliver a mind-blowing sermon in the morning. What’s the Son of God to do?

“Get that guy some CBN,” says Scott Yoss, a budtender with The Clinic in Denver, Colorado, referring to cannabinol, the non-psychoactive sedative cannabinoid. “Failing that, I would suggest a nice medicated chocolate following a good dinner.”

Assuming the CBN did the trick and Jesus got himself some rest, he would likely feel some serious pressure when dropping wisdom on the crowds assembling to hear him the next day. After all, his words were about to become instant pieces of history, read by trillions of humans for eons to come. In preparation for this, Jesus would need to dig deep, integrating various brain regions to conjure up nuggets like “do not be anxious about tomorrow, for tomorrow will be anxious for itself.”

Perhaps a little cerebral pinch might be just the ticket to get Jesus’s creative juices flowing?

“Durban Poison is perfect for mental stimulation,” says Shah. “It would be great for creative inspiration and dropping some serious truth bombs. It also has a very energetic high, so it would be perfect to smoke another joint of the Durbs before he actually delivered the sermon.”

“If I was to smoke something with him, I would suggest a Super Lemon Haze or DJ Short’s Flo,” adds Yoss. “Both full of energy and cerebral clarity, providing a clear stream of consciousness. Or, if he wasn’t into smoke, 1906 Bliss Peanut Butter Cups are very inspiring. They have a natural MDMA as a botanical-infused cannabis product.”

Reported by various historians, guests at the Last Supper were served unleavened bread, red wine, olive oil, honey, figs, and according to early versions of the Leonardo da Vinci painting, grilled eel with orange slices, as revealed by the University of California’s Gastronomica after art historians cleaned centuries of overpaint and dirt from the fresco in 1997.

Seeing as Jesus was paranoid about someone betraying him, and his disciples were about to be told they were (metaphorically) eating Jesus’s body and drinking his blood with this meal, a fat, low-THC blunt passed between them might be just the ideal appetizer for this surreal dinner party — just so long as it wasn’t anything too heady.

“A good chocolate always works with orange slices or red wine,” says Yoss. “The Coda company has some great truffle flavors, including a passion fruit and Schezwan jam, or burnt caramel.”

“I’ve been a vegetarian all my life, so I can’t speak to strains that go well with eel, but I’m pretty confident Juicy Fruit would pair well with the rest of the meal,” says Shah. “A bowl of JF is enough to make me devour microwaved leftovers, so [Jesus’s] disciples would probably eat themselves into a food coma, and probably care a lot less that they had just eaten the flesh and drank the blood of Jesus Christ. And let’s be real, a properly fed and sedated Judas might be too lazy to betray Jesus.”

Assuming Judas did go through with the betrayal, Jesus had some serious misery in store for him just before the crucifixion. According to the Gospel of Luke, Jesus was so stressed out about this, he was sweating blood. Perhaps there is some medical substance Jesus could have imbibed leading up to the crucifixion that could at least take the edge off?

“I’ve never endured physical torture or a crucifixion, but I’m pretty confident JC would feel substantially less pain after a fat joint of the UW Purple,” says Shah. “I’ve only seen this strain in Washington dispensaries, though. So finding an eighth in the Holy City might be a tough task, one that would probably be better delegated to one of his disciples — but obviously not Judas.”

Meanwhile, Yoss would prescribe to the King of Kings “a 1:1 CBD/THC patch. In addition to being a painkiller, it would cover the skin with an extra layer to add some small protection from the whipping.”

Theologians like to argue about whether Jesus was raised from the dead in his physical body, or a spiritual one. The Bible does say that he carried scars from the crucifixion, which suggests he was still healing from the torture — in which case, a little MMJ might be in order.

Even if he was just a spirit, he would probably still enjoy a little lift of his spirit after enduring the most harrowing torture known to man. Let’s check in with our budtenders one last time to see what they recommend for Jesus in his final 40 days on Earth.

“CBC would help with the topical problems,” says Yoss, referring to the anti-inflammatory cannabinoid. “Applied directly to the affected area for pain. It would also help with clearing up scars.”

“Getting crucified sounds excruciatingly painful,” adds Shah. “A strain with both CBD and THC, like Pennywise, would be great for recovering from the physical pain. If I was in his shoes, I would also throw in an infused bath bomb. Coda’s bath bombs are my go-to. With 15mg each of CBD and THC, along with essential oils like cedarwood and lavender, they get the job done.”

So in honor of Jesus this Easter, why not partake in some hot cross buds? It’s what he would have wanted.