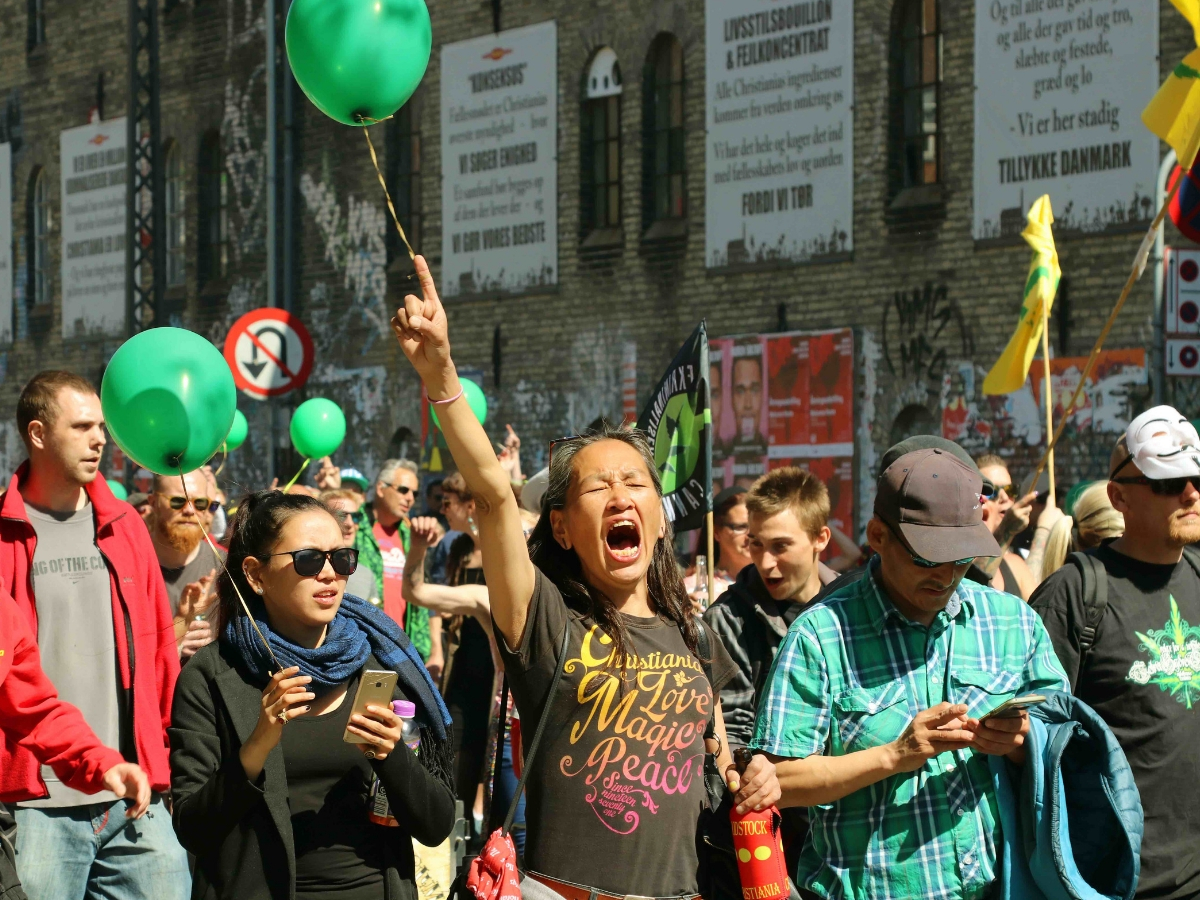 The annual Global Marijuana March in support of legalization takes place every year in a number of locations, including Copenhagen, Denmark.
By Stephanie Bishop | Published: October 11, 2018

On March 30, 1961, the United Nations adopted the Single Convention on Narcotic Drugs, a treaty to control and regulate certain substances considered to have medicinal value, while prohibiting the use of drugs and narcotics considered harmful to society and with no medicinal value. The treaty created four schedules of controlled substances and assigned the Commission on Narcotic Drugs and the World Health Organization (WHO) the task of moving drugs through those four schedules. The International Narcotics Control Board and United Nations Office on Drugs and Crime were commissioned to serve as administrators and compliance monitors.

The Single Convention is not self-executing and therefore required parties to pass laws meant to carry out its provisions. The United States Controlled Substance Act, adopted by the Nixon administration in 1970, serves the purpose of compliance to this treaty for the US and enacted a similar scheduling program. In both the UN Convention and the Controlled Substance Act, cannabis is considered highly addictive, harmful to society, with a high probability of abuse and no medicinal value.

Since the treaty was enacted, researchers from many participating nations have found the cannabis plant to indeed have medicinal value. The discovery of the human body’s biological endocannabinoid system — which is comprised of receptors and cannabinoid compounds — in the late ’80s by Prof. Raphael Mechoulam revolutionized scientific understanding of the plant. Currently, 113 cannabinoids have been identified and are being studied for their medical efficacy in the treatment of a long list of ailments including seizures, certain cancers, autoimmune diseases and more.

In spite of federal and international prohibition, medical marijuana patients are enjoying safe access to some extent in 30 US states and 40-plus countries around the world. Corporations are entering the markets where permitted and some countries now even engage in international trade. In the European Union, member nations including Germany, Greece, Malta, Spain, Italy, Croatia, Czech Republic, Romania, France, Portugal and Denmark have adopted legislation providing individuals suffering from certain conditions access to cannabis medicine. Other countries, like France, are currently working to pass full regulation for safe access.

This advancement in the global cannabis movement has given the UN cause to review the placement of cannabis in the most stringent category that does not allow for medical use or research. The process began in June 2018 with a pre-review conducted in Geneva by WHO’s Expert Committee on Drug Dependence, with a particular focus on cannabidiol (CBD). The report concluded that although CBD does have the potential for abuse, no one has died from consuming it and there is sufficient scientific evidence regarding the therapeutic benefits of cannabis in treating certain ailments, such as epilepsy and some cancers, to warrant an in-depth review. The broader review is scheduled for November and could trigger a vote to reschedule or remove cannabis from the drug diversion program altogether.

A decision couldn’t come soon enough, as countries with medical marijuana programs enacted are already negotiating and engaging in the international trade of cannabis-based products, regardless of the placement of cannabis in the UN’s scheduling program. German company Cannamedical Pharma, one of four companies approved by Germany’s Federal Opium Agency to import and distribute cannabis medicines throughout the country, has been supplying products from the Netherlands to medical marijuana patients, and is currently in negotiations with Canadian companies to import additional cannabis products. Germany has the largest number of medical marijuana patients in the European Union, with approximately 30,000 registered patients facing a severe shortage of supply.

In September, the Jamaican Medical Cannabis Collective — a Canadian-Jamaican cannabis export company based in Toronto — announced plans to invest $2 million to preserve Jamaica’s unique indigenous strains for the purpose of importing products into Canada’s recreational cannabis market. And back in March, Canadian company Buzz Capital announced its intent to acquire majority shares of Kaya, Inc., the first vertically integrated cannabis production company to receive licensing from the Jamaican government for the purpose of eventually importing products to Canada’s cannabis market, which will be fully recreational October 17.

In Israel, since 2017 medical cannabis companies have been pressuring their government to allow the export of cannabis medicines, one of only a small number of countries to allow such practice. Israel attorney Hagit Weinstock, who specializes in connecting international investors with cannabis companies in Israel, estimates stalled export deals valued anywhere from $250 to $300 million could be lost if the government does not pass legislation to export soon. The delay has left investors hanging and crippled medical cannabis companies in the region. Rescheduling or removing cannabis from international drug treaties would change everything, allowing Israel to take its place as a leader on the world stage with regard to cannabis production.

Regardless of what happens in November when the United Nations is set to review cannabis prohibition under the 1961 Single Convention treaty, it is clear momentum for cannabis regulation on a global scale is not slowing down. As more countries move to allow programs for safe access, the UN will of course feel more pressure to deschedule the plant’s status. Eventually, change will come. The question is, will change come soon enough to keep up?

Cannabis Capital Convention In Amsterdam: ‘Europe Will Be A Medical Market First’
420-Friendly Fiestas For Fall: The Ultimate Autumnal Escape