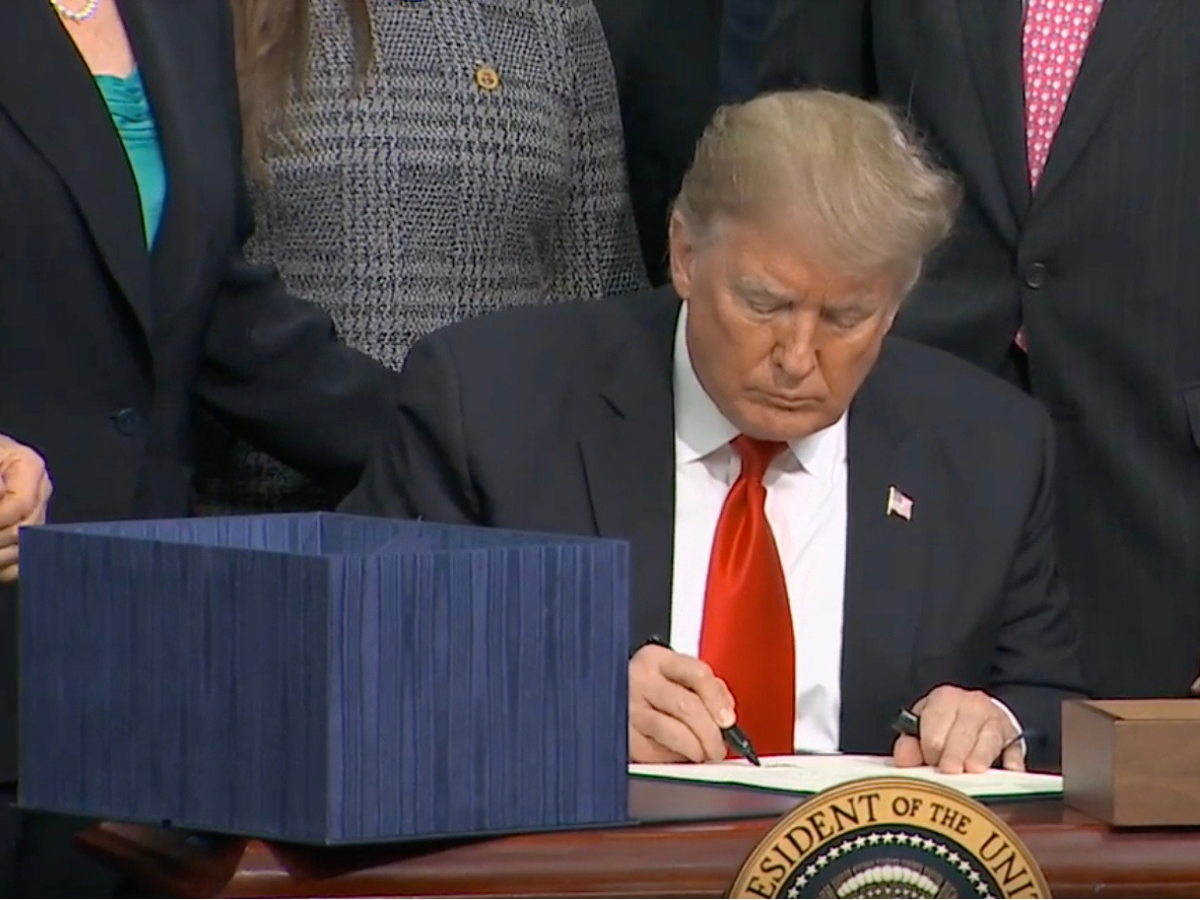 President Donald Trump signed into law Thursday the $867 billion 2018 Farm Bill, which makes hemp farming legal in the US, while also including a provision to remove hemp from the Controlled Substances Act.

“We have to take care of our farmers and our ranchers and we will take care of them,” said Trump at a press conference in Washington, DC, ahead of the Farm Bill’s historic signing. “And not only is it a bill, it’s a great bill for them.”

Like cannabis (and potentially fatal drugs, including heroin and ecstasy), hemp has been at Schedule I status since 1970, when the Drug Enforcement Administration and the Food and Drug Administration first determined the substances that have “a high potential for abuse” and no “accepted medical treatment use in the US.”

While cannabis is the family of plants that the species hemp and marijuana belong to, the major difference between the two is that hemp does not contain a significant amount of the psychoactive compound tetrahydrocannabinol (THC), whereas marijuana does. THC is one of the more common chemical compounds, or cannabinoids, found in cannabis species, the other being cannabidiol (CBD). Typically, hemp contains 0.3% or less of THC. It does, however, also contain an abundance of CBD, the cannabinoid valued for its medicinal properties, and that is used in the effective treatment of epilepsy, seizure disorder, pain management, anxiety and more. Hemp is also useful for producing such textiles as paper, clothing, food and building materials.

“With the passage of the Farm Bill, we are delivering to the farmers and ranchers, who are the heart and soul of America, all sorts of things that they never even thought possible. We are ensuring that American agriculture will always feed our families, nourish our communities, power our commerce and inspire our nation. And I am opening up massive new markets in order to do things with other countries,” Trump said at the press conference Thursday, in what many interpret as a hint that hemp legalization could be a boost to the US economy.

The Business Of Hemp

Steven Phan, founder of New York’s experiential and educational CBD store Come Back Daily, tells Big Buds that hemp legalization will have an “enormous” impact on the cannabis industry. He says he’s seen a high demand for hemp-derived CBD products over the years, and that the legalization of hemp will help push cannabis firmly into the mainstream.

“The production of CBD and other non-intoxicating cannabinoids sourced from legal hemp will surely displace portions of that market from the legal cannabis industry,” John Hudak, a senior fellow at the Brookings Institution who focuses on cannabis policy, tells Big Buds. “Although hemp will be regulated, it will not be regulated nearly as heavily as cannabis in the states. Those differences in regulations can drive down costs.”

Phan says that, as with cannabis, hemp’s illegal status at the federal level has made it difficult and prohibitive for business owners to raise capital for their businesses, and that legalization will help clear the way for the financing of hemp-related companies through banks and other financial institutions, seeing as there will no longer be a legal risk associated with investing in the cannabis economy.

“Ultimately, a company needs capital to grow,” Phan explains. “The major source of financing for other types of companies has been small-business loans. But with hemp illegal under federal law, banks were understandably reluctant to get involved. Now, with the legal status of hemp secure under federal law, we will have the ability to access capital.”

“The Farm Bill doubles the amount [that] farmers can borrow to expand and improve their farms,” Trump said. “By signing this bill, we are protecting our crop insurance programs and funding that producers rely on in times of disaster. … [And] it dedicates additional resources to fight the opioid crisis. … [which is] an incredible problem for our country.”

The Politics Of Hemp Legalization

The federal government approving marijuana’s close relative after 50 years of prohibition is a major milestone for the legalization movement. While we’re still not quite at the point of nationwide cannabis legalization, the legalization of hemp could mean an easier passage to end pot prohibition — one that will happen sooner rather than later.

“Hemp legalization does show the ability of members of Congress to start thinking of the cannabis plant in different, nuanced ways — something Congress has been unable to do in the past 100 years,” Hudak continues, stressing that while cannabis legalization has similar economic impacts to hemp, they also differ in important ways. He notes that the issue of cannabis legalization is more complex and will ultimately have a larger societal impact, due to its strong connection to such concerns as “criminal justice, personal liberty, racial equality and product safety.”

In recent times, key players within the Republican and Democratic parties have begun to more vocally rally around the idea of legalizing cannabis at the federal level, and the conversation has largely been about how that new legal economy will look. Lawmakers are considering bills that would legalize cannabis at the national level, or possibly continue to leave it up to the states to decide. With hemp legalization being spearheaded by members of both major political parties, the 2018 Farming Bill suggests that a continued bipartisan push is exactly what is needed to get cannabis descheduled.

“This was really an effort of everybody,” Trump asserted. “It was a bipartisan success — something you don’t hear too much about.”

When It Comes To Hemp Legalization, Here’s Where You Need To Be Careful

Though hemp is now legal, that doesn’t mean there won’t be rules for how it can be cultivated and utilized. If you’re thinking about getting into the new legal hemp industry, you must first make sure you know exactly how to work within the regulations — otherwise, you might end up in trouble.

“There will be a lot of people violating rules and regulations, not out of sinister intent but because they have failed to spend the time to understand fully what these programs require,” Hudak explains. “Too often in the conversation around hemp, CBD and other related products, people fall victim to a telephone game in which one person or social media source speaks with ignorance yet authority on the topic, and those comments soon become embraced as truth.”

Merry Munchies: Delicious Edibles To Enhance Your Holiday Spirit
In The Black: Is It Worth Your While Switching From Black-Market Growing To Legal?