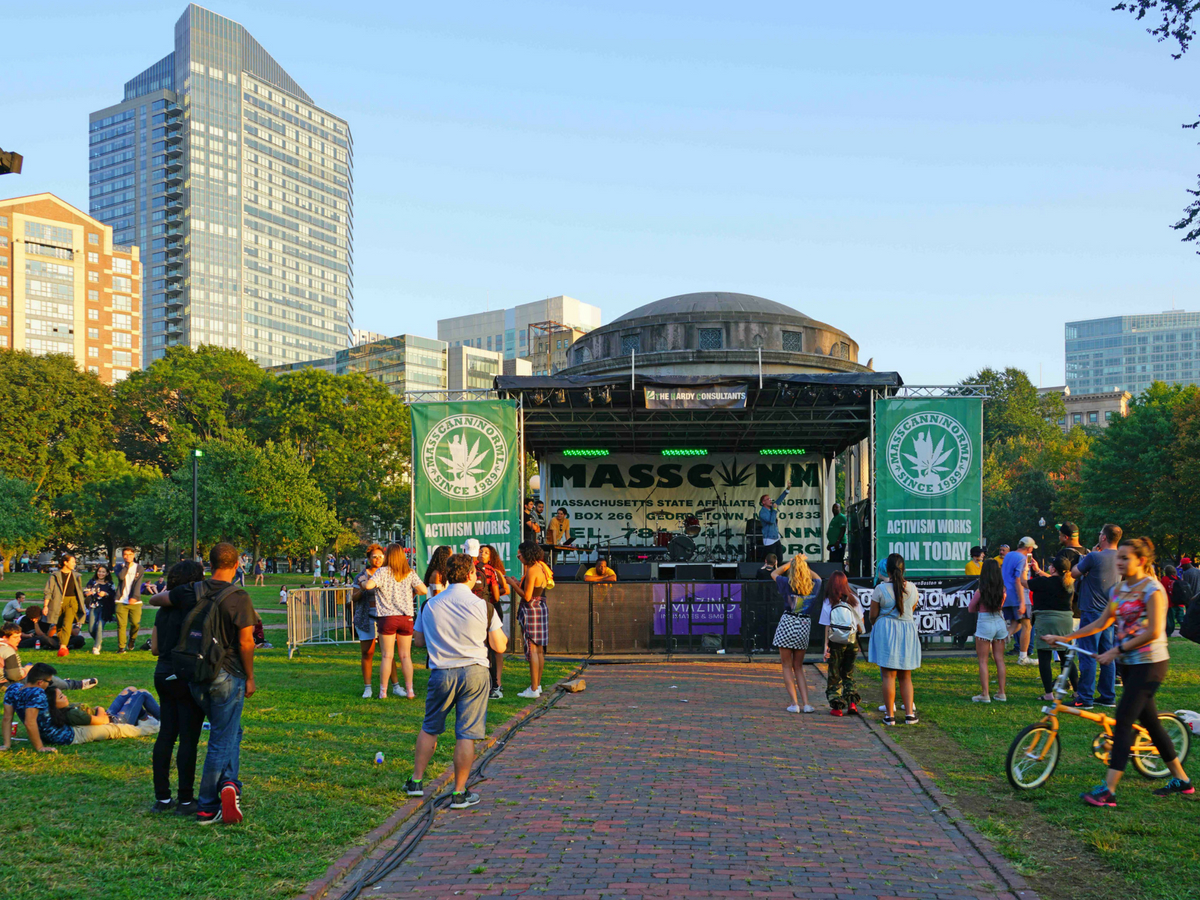 Both Massachusetts and Nevada voted to legalize recreational sales of cannabis in November 2016.

Twelve months after the first retail marijuana stores began sales in Nevada, the state’s 61 dispensaries are on pace to sell upward of $410 million in cannabis products. The Nevada tax department has taken in more than $55 million in revenue through most recent data available from the first 10 months of recreational sales, and only one dispensary has been disciplined with a temporary license suspension.

Bill Anderson, the Nevada Department of Taxation’s executive director, said actual tax revenue through 10 months has already surpassed initial 12-month estimates by over 10 percent. When final numbers are posted for fiscal year 2018, which began on July 1, 2017 and ended June 31 of this year, Nevada cannabis stores could exceed original sales and tax projections by as much as 45 percent.

“It’s been wildly successful, even better than projected in terms of tax revenue,” Anderson says.

In Massachusetts, industry leaders are still waiting for their opportunities. Despite state law authorizing the sale of recreational cannabis, the licensing process has lagged, leaving more than two dozen dispensary-owning applicants without the legal go-ahead to open their stores for recreational sales.

Sam Barber of Cultivate is one such applicant waiting to hear back from the Massachusetts Cannabis Control Commission. Operating at a loss under Massachusetts’ medical-only model since the dispensary opened last December, Barber said the added business from recreational sales would be “a huge help.” While state officials have told Barber his license application would likely be approved in the first half of July, local officials in Leicester, where the store is located, have not committed to a time frame for the dispensary’s local license.
More than 60 applications for recreational marijuana dispensary, cultivation, production and testing lab licenses are being reviewed by the Cannabis Control Commission, says Steve Hoffman, its chairman. Hoffman added that only “big things” were on the way.

“We’re confident the recreational cannabis industry will soon be up and running,” Hoffman continues. “While we’re also looking forward to getting started, it’s important we operate diligently and carefully to ensure the safety of everyone involved.”

While Massachusetts will likely be in for millions of dollars in additional tax revenue and added jobs to its already-thriving economy, Nevada officials and industry members warned that legalization of recreational marijuana can also bring its fair share of challenges.

Las Vegas Metropolitan Police Sgt. Randy Dockery says legal cannabis in Nevada has provided opportunity for the illegal market to thrive in “unprecedented numbers.” Instead of trying to sell under the table at locally licensed cannabis events, like the High Times Cannabis Cup and Las Vegas Hemp Fest, more black-market dealers are hosting weekend “pop-up” markets, where dealers from across Nevada and neighboring California peddle their product to unsuspecting tourists who think such sales are legal. The marketplaces, which feature up to 25 vendors selling everything from cannabis flower to potato chips, often take place in warehouses throughout the Las Vegas Valley, lasting just a few hours before vendors count thousands of dollars in earnings and head home.

Illegal cannabis dealers, many of whom present themselves as legal sellers by passing out their business card in popular tourist areas like the Las Vegas Strip and Fremont Street, can “easily fool” many of the 39 million annual tourists to Las Vegas, Dockery says. Many locals, unaware of the marijuana dispensary landscape, have also been conned into buying at these pop-up markets.

Dockery says anywhere from two to five such illegal pop-up markets happen across the Las Vegas Valley each weekend. The oversaturation of marijuana flower in California has prompted many vendors, who come from out of state to sell in Nevada, to leave behind pounds of the plant after their pop-up sales end.

Boston Police Commissioner William Evans says Massachusetts is also preparing for the influx of black-market dealers that has set back Nevada’s cannabis industry and occurred almost universally across the four other states to legalize recreational marijuana. The Boston Police Department has stepped up enforcement of online marketplace dealers, who advertise on sites like Craigslist as well social media platforms Facebook and Instagram, Evans reveals. The department has also beefed up its marijuana enforcement unit by nearly double since recreational use was approved by voters in 2016.

Evans, who pushed against legalization of the plant leading up to that election, estimated illicit use in public places has multiplied “fivefold.”

“It seems like everywhere I go now, I smell it,” he says. “We’ll need all the help we can get.”

A statewide survey of Nevada dispensary owners provided by the tax department suggests that flower accounts for around half of all cannabis sales, while concentrates make up 25 percent of sales, and edibles account for a little under 13 percent of products purchased for recreational consumption. Pre-rolls represent 10 percent of sales, and the final three percent came from medicinal products, including suppositories and tinctures. It’s further estimated that as many as 8,500 jobs have been created by Nevada’s legal cannabis industry, and more than $300 million has been invested by cannabis companies in local real estate, according to numbers from the Nevada Dispensary Association.

In Massachusetts, the state’s 31 licensed dispensaries, 35 cultivation grows, 25 production facilities and four testing labs are still operating at a loss under the medical-only model. Like Nevada, officials in Massachusetts expect those figures to turn positive when recreational marijuana is rolled out over the next six months. More than 73 percent of all product sold is flower, including pre-rolls, while concentrates account for 22 percent of sales, per numbers from the state’s Medical Use of Marijuana Program as well as the Commonwealth Dispensary Association.

Las Vegas cannabis consultant Jason Sturtsman says such differences between the two states were in part due to Nevada’s restrictive laws surrounding casinos and cannabis consumption. Nevada law limits legal cannabis use to private residences, meaning tourists on the strip and downtown Las Vegas are banned from consuming the plant, even though they can legally purchase it. As a result, more people are buying edibles to stealthily consume the plant in hotel rooms away from the eyes — and noses — of authorities.

For growers in Massachusetts, more of an emphasis should be placed on flower, Sturtsman suggests. With a smaller tourism industry than Nevada and more private residences to use the plant, flower should continue to be far and away Massachusetts’ most popular product when the recreational industry kicks off.

“Massachusetts will definitely have more of an emphasis on local buyers than Nevada, with more users having legal means to use the plant at home,” he says. “The potential there is enormous.”