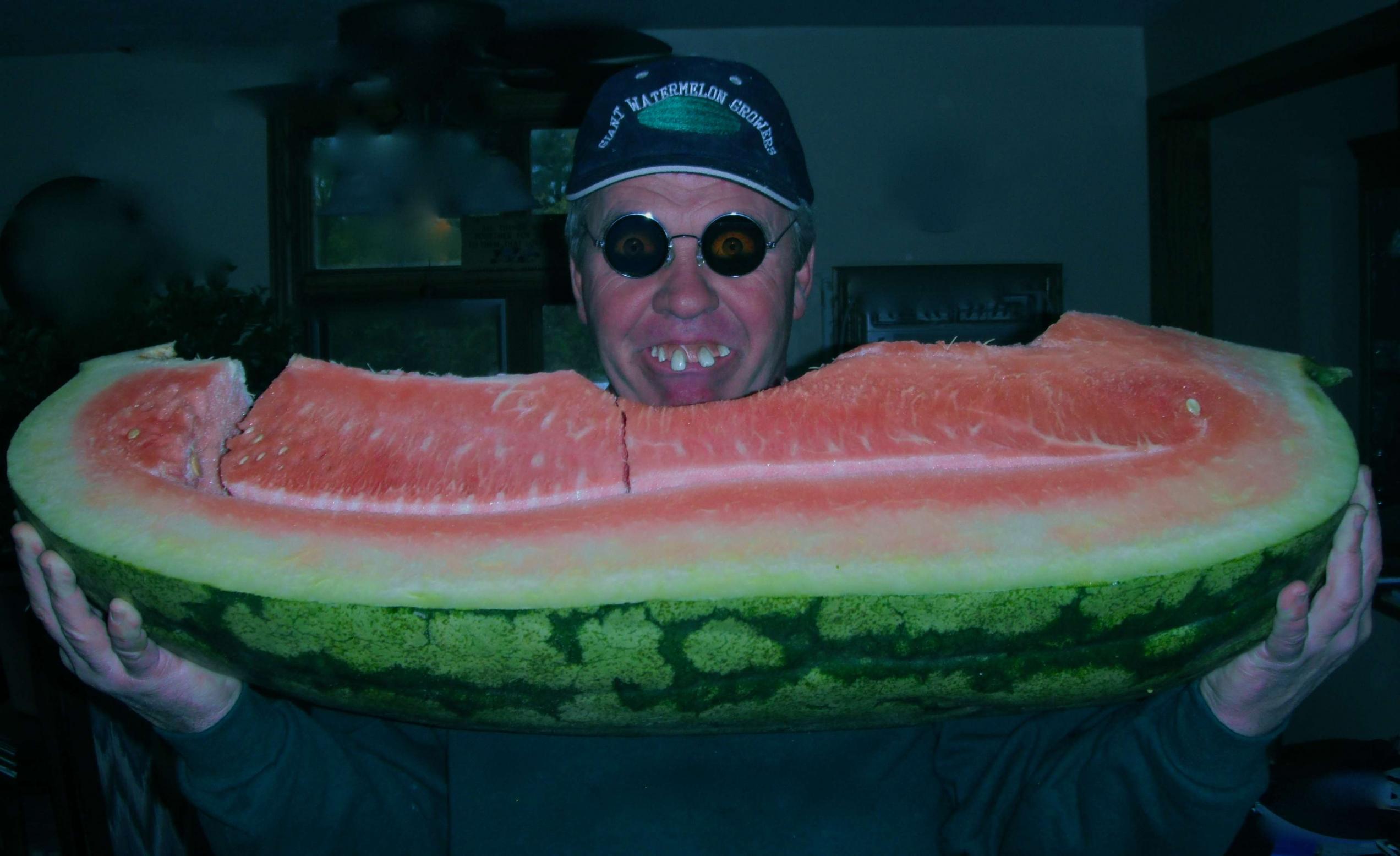 By Nigel Salazar | Published: January 8, 2014
Growing marijuana is all about the biggest buds, the biggest THC percentages, the biggest tally of grams per watt. But now I realize I hadn’t grasped what BIG really was—until I watched the insane Elvis video you see later in this article.

When I first clicked on the video, I saw a jovial dude in a funny Elvis disguise, talking about gardening. Then he takes his camera around to show you his wickedly lush farm. You see gargantuan pumpkins, watermelons, tomatoes. Pumpkins so big you could fit inside them.

What’s really unusual is: he used marijuana nutrients to grow those beauties.

For security purposes, we call the grower Handy Homegrown (HH, for short) and list his geographic location as “Muddy Waters, Michigan.”

Behind his crazy Elvis disguise is an internationally-known professional farmer who wins awards growing giant pumpkins, watermelon, cantaloupe, and other oversized produce. What does “giant” look like in terms of numbers?

Handy Homegrown is a leader among the increasing number of “giant growers” whose goal is growing the largest, most impressive gourds, fruits, and veggies.

Handy Homegrown does not grow marijuana. But in his quest for high-performance fruits and veggies that go bigger than any have grown before, he has that same go-for-the-gold attitude that successful marijuana growers have.

Which explains why he was intrigued when he heard that hydroponics company Advanced Nutrients offers professional crop inputs that push plants to their highest yields.

“These Fertilizers Put More Size and Health Into My Crops”

HH explains that most giant farmers still use old school fertilizers and methods, but what he heard about Advanced Nutrients convinced him to try something new.

“I switched to Advanced Nutrients because it’s the only fertilizer program that provides an integrated, engineered systems approach that boosts my plants’ roots, metabolism, photosynthesis, energy, health, vigor, growth rate, stress resistance, and productivity,” he said.

His Elvis video surprised me, because I was watching a non-marijuana farmer using ultra-modern, THC-boosting hydroponics nutrients you usually only see in grow stores and professional marijuana grow rooms.

HH says his farm is a perfect laboratory to measure the benefits of the modernized approach to feeding, because the high-revving metabolism of giant pumpkins, watermelons, and other giant crops make it easier to monitor fertilizer effects.

“When you grow giant watermelon, you see right away if what you give them is working or not, because they can grow 6-10 inches a day and add 5-8 pounds of weight a day,” HH explained. “I give them Advanced Nutrients, and immediately the leaves, growth rate, roots, and other indicators go up right before your eyes. It’s not just the genetics of these plants or the growing conditions, it’s also the Advanced Nutrients system that’s giving such obvious good results.”

Growers who’re into giant fruits and vegetables look at HH’s new nutrients success and ask him if it’s cost-effective to use hydroponics fertilizers on non-marijuana crops.

What he says carries serious weight with other growers. HH is an international leader in the giant fruit and veggie field. He has his own gardening organization, educational outreach, seed sales, and a website called worldwidegiantgrowers.com.

HH explains to inquiring growers that because Advanced Nutrients hydroponics products are super-concentrated, and scientifically designed to push plants to their maximum yield, the products are providing ample return on investment.

This “Elvis” uses thousands of gallons of Advanced Nutrients nutrient water every month. After all, a giant pumpkin drinks 70 gallons of nutrients water per day.

From Giant Watermelon Field…
to the David Letterman Show in Manhattan

This year for the first time he’s using the entire Advanced Nutrients line. It’s been a tough year for farmers in his area. Growing conditions have been bizarrely unusual. Not enough sun. Way cooler and wetter than his crops like. Not only that, he’s growing in thin hilltop soil that lacks nutrients.

But despite these severe conditions, Chris’s crops are doing way better than when he used regular feed programs, and way better than similar crops grown by other farmers in his same geographic are. They’re worried. He’s not.

“I’m looking at what Voodoo Juice did for my roots. I mean, this is the biggest root mass I’ve ever seen,” he reports. “Even with the poor conditions, the Advanced Nutrients formulas are stimulating my crops to the point where they’ll break another record.”

What agricultural record is Chris hoping to break? The record he himself set in 2010 when he grew the biggest watermelon in the world for that year. It was 291 pounds! So big that David Letterman invited him and his watermelon to Manhattan, to be on “The Late Show With David Letterman.”

“It was fun to watch the reactions of Manhattanites who saw the backbreaking work and logistics that go into getting a 291-pound watermelon into a television studio,” Chris recalls.

Another giant pumpkin and watermelon grower (who preferred anonymity) told me that because some of his outdoor giants have to be covered with mini-greenhouses, his property is routinely surveilled at close range by anti-marijuana police in helicopters.

“Way too much noise, and a distinct invasion of our privacy,” the grower said. “Also, a total waste of taxpayer money.”

He notes that HH and Chris are known as innovative master growers who combine horticulture, farming, and science to regularly score big in the giant growing community.

“This is a very competitive group of farmers,” he explains. “We’re all looking for an edge to get us to the top of the size and weight scales. The hydroponics marijuana nutrients are clearly creating bigger crops that grow faster and stronger.”

Recalling that HH used Kushie Kush and other hydroponics formulas to grow a 1479-pound pumpkin, I watched his Elvis video again as I inhaled Moonshine Haze marijuana. The kind bud sent me into a Hazy, trance-like sleep and I dreamt of growing a sticky 1479-pound Haze bud. I needed a lot of Haze to go with that lifetime supply of watermelon, pumpkin pie, and fresh tomato salsa.