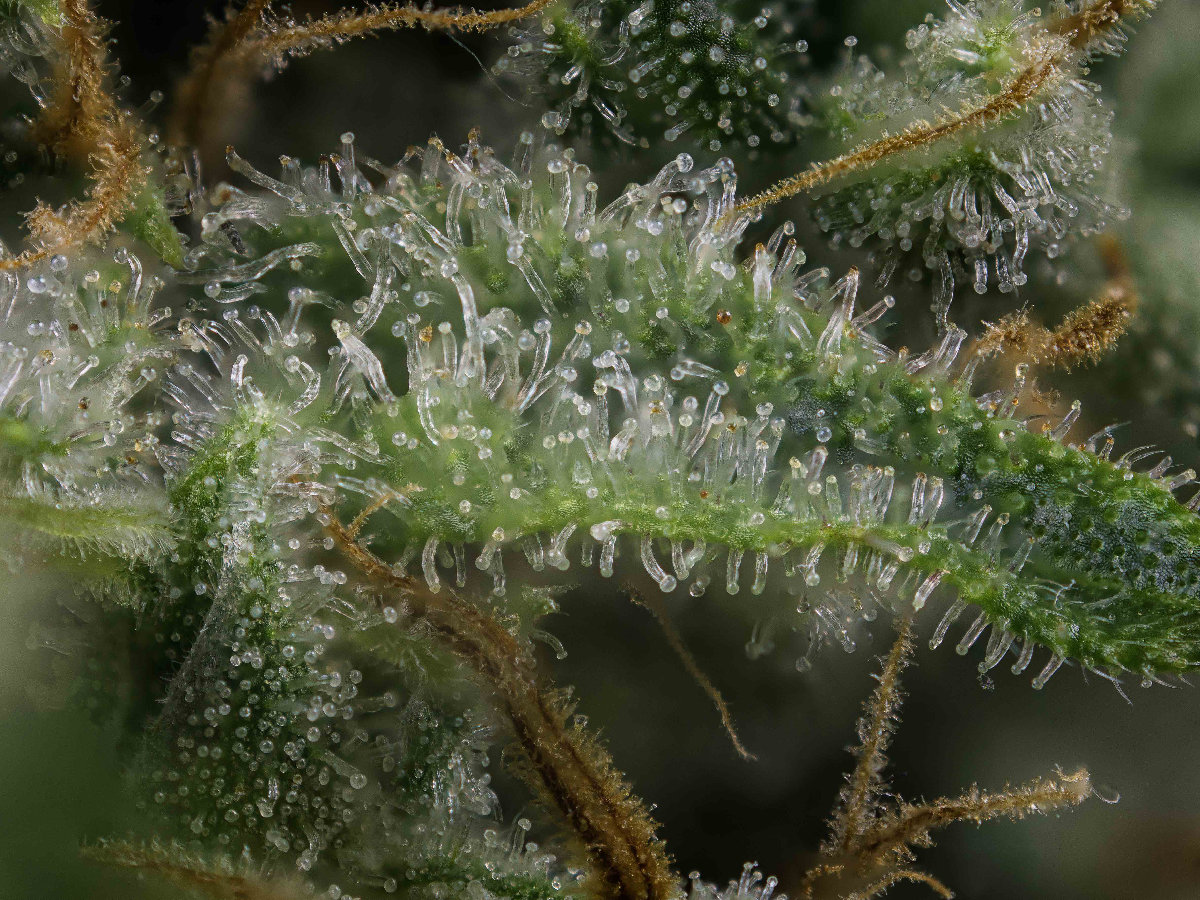 Our knowledge of terpenes remains limited, considering how prevalent they are in our environment. Indeed, terpenes are present in many of Earth’s living things — and they might even change the plastics and fuel industries as expanding innovation begins to unlock and explore these aromatic organic compounds.

This revelation is what makes the current focus on terpene control and how they govern the many effects of cannabis so interesting. Researchers and brands alike are increasingly paying closer attention to these phytochemicals — whether they’re generated by cannabis or in a laboratory.

So, what exactly is a terpene? Project CBD offers this description:

Terpenes are volatile aromatic molecules that evaporate easily and readily announce themselves to the nose. … Marijuana’s compelling fragrance and particular psychoactive flavor are determined by the predominant terpenes in a strain.

Terpenes are found in the resin glands of the plant — clear, bulbous hairs also known as trichomes. As well as oozing terpenes, trichomes also produce therapeutic cannabinoids like THC and CBD.

The typical cannabis terps — limonene, myrcene, terpinolene and caryophyllene — are also prevalent in many of the earth’s most common plants and fruits, such as citrus, pine trees and grasses, and even spices like cloves and pepper.

There are some rare terpenes from cannabis that are present in amounts too tiny to detect, so it’s difficult to produce exact specifications with these chemicals.

What exactly makes a terpene rare? We asked some experts for the finer details of minute terpene presentation in cannabis.

Tristan Watkins, a Ph.D. in neuroscience and the chief science officer of LucidMood, studies the effects that the compounds in cannabis produce, including how terpenes and cannabinoids work together.

“Defining a terpene as rare depends on how often you see it expressed in any cultivar, and at what ratio that terpene is expressed,” Watkins tells Big Buds. “For instance, limonene and linalool are quite common and are typically expressed at much higher percentages than ocimene or valencene, which are much less common to find and are expressed at relatively low percentages.”

Watkins says that valencene is one of the rare terpenes to get excited about. “Tangie and the cultivars utilizing its genetics express high levels of valencene, which creates a vibrant tangerine scent.”

True Terpenes is a Portland-based terpene producer that many cannabis companies rely on for compounded products. Founder Ben Cassiday has been researching these molecules for years, explaining that the less-common molecules “are likely the [cannabis] connoisseur’s favorite terpenes. Even if they have no knowledge of them or a vocabulary to describe them, these are the unique notes that make varieties special.”

Katie Stem, CEO of Peak Extracts, is helping consumers and producers develop the tools to talk about terpenes. Her extensive lab experience and degree in traditional Chinese medicine forms the foundation of research that likely influences innovation at her company. She believes that so-called rare terpenes are simply under-documented thus far, and that once we have the tests, names, research and language to describe them, they will become as commonly discussed as any other component of cannabis.

“Cannabis terpenes have become a specialty of mine, since our company focuses on strain-specific edibles and extracts,” Stem says. “We have spent years in research and development on our proprietary extraction process called Terp-lock, which retains the terpenes unique to each cultivar.”

The terps Stem has her eye on are nerolidol, geranyl acetate and bisabolol, which feature floral notes that cannabis consumers are beginning to pay closer attention to. Stem says that terpene-rich extracts are going mainstream, and customers will begin to know more than the basics.

Rare Terpenes And Where To Find Them

Eudesmol, found in OG Kush, rates among the favorite terpenes mentioned by these experts, as well as guaiol, the terpene responsible for the slight funk of Blue Dream. Cassiday’s team produces them in single-note products and strain-similar blends. Watkins points to geraniol as another rarely expressed terpene that pops up in Lavender and Headband strains as complex floral notes.

“Those that truly make varieties unique [that is, the difference between OG Kush and Tahoe OG or Monster Cookies and Orange Cookies] are less common and found in trace quantities, or are even below the limit of detection for all but the most advanced modern analytical equipment,” Cassiday explains.

Many factors can determine how terpenes are expressed, not just by a given plant variety, but by individual plants.

“Terpene expression has a great deal to do with growing conditions,” Stem says. “For instance, even though many characteristics such as smell and effects are variable between strains, there’s often a terpene fingerprint common to each farm.”

While multiple cultivators may be growing the same strain or same family of cannabis, the results could be dramatically different. High-quality providers represent the first step in securing terpene-rich products.

Terpene expression is one of the indicators of quality, and Brad Bogus, vice president of growth and marketing at Confident Cannabis, says it’s all about quality control practices and data: “Anyone anywhere can grow a strain to produce rare terpenes. The key is to record every decision you make in your growing process, test your results, and see what gets expressed. Indoor growers have the most opportunity to express specific terpenes, as they can control just about everything.”

What The Future Holds For Rare Terpenes

The medical community is beginning to acknowledge that aromatherapy and essential oils might have more to offer the world than just good smells and flavoring agents. Terpenes are the particles that drive these essential oils, so the door to cannabis integration appears to be more ajar.

Terpenes can completely change the effects of cannabis, but we only know why and how to a certain degree. For example, we know that getting terpenes like myrcene in higher numbers can increase the sleepiness and sedation of some strains; others, like limonene, can make the consumer feel more alert.

Cassiday notes that valencene is present in strains like Tropicana Cookies, while Watkins points to the ever-popular Tangie — both carry an intoxicating orange fragrance that does more than just smell enticing.

“Valencene is thought to be both stimulating and calming — a rare combination,” Cassiday explains. “Generally, compounds with stimulating effects tend to do the opposite, raising stress levels and fatigue after the duration of the initial effects have run their course.”

The floral notes of some terpenes are also be more than superficial.

“Cannabis educator Emma Chasen recently made me hip to nerolidol as a rare terpene that has shown some initial promise in fighting anxiety,” Bogus says. “So much of cannabis use is for fighting anxiety, and the main reason people try cannabis and run away screaming is because [the wrong strains can actually create] anxiety and panic, so strains higher in nerolidol [and also in CBD] should generate a happier response, with far less anxiety.”

“Nerolidol is very floral and delicious smelling, and alters the way chemicals pass through membranes, suggesting it may affect the way cannabinoids and other terpenes are absorbed during consumption,” Stem adds. “In addition, it has been shown to have antifungal, anxiolytic, anti-cancer, antimicrobial and antioxidant properties.”

Learning that terpenes do even more than just drive the effects and aroma of cannabis is a big deal, so expect more studies published in the near future.

“Many terpenes are solvents themselves and can act as a co-solvent for cannabinoids or other terpenes, affecting many aspects of the cannabis experience,” Stem shares from her own extensive research. “It’s unclear how using added terpenes or reintroducing them after withdrawing them early in the extraction [process] affects how all of these variables mesh together.”

This expanding area of scientific analysis could impact how the medical community approaches cannabis-based medicine, and could also altogether change how we use cannabis. Cultivators, researchers and the brands that produce these terpenes are working hard to demystify this process, though standardization could still be far off.

In the meantime, how is a consumer of flower, concentrates and edibles to get the most therapeutic benefit out of their terpene experience?

“Record the smells and experiences each product gives you,” Bogus advises. “When something doesn’t provide a good experience, try to figure out what was in that product that was different from others, and avoid it in the future.”

Until we know which terpenes help to combat disease and which ones cause such active chemicals as THC to react poorly in some people who partake, self-analysis and data collection is important, from growers right down to the burn.