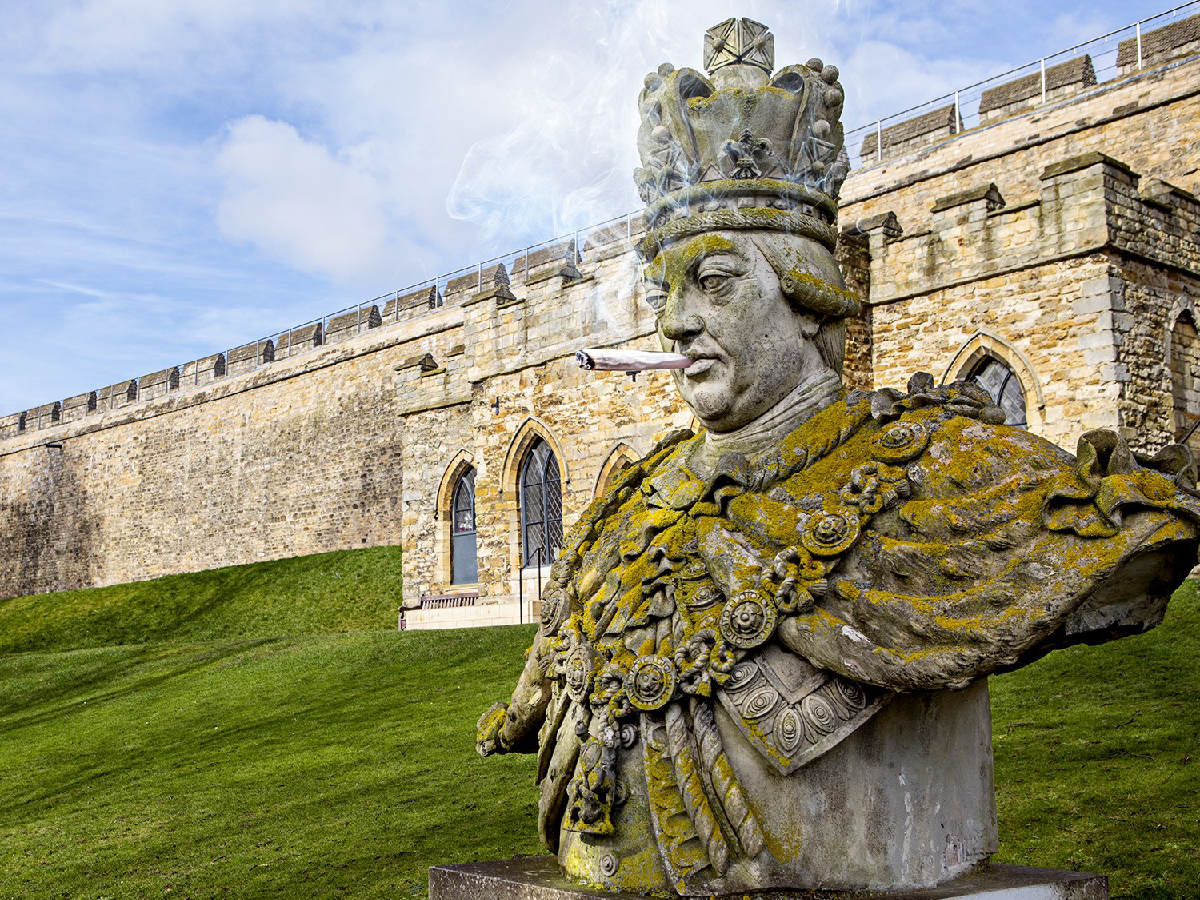 In 1761, Great Britain’s King George III ordered American colonists to plant more cannabis seeds. At the time, cannabis hemp was a staple crop in the fledgling colonies, and 80–90 percent of all clothing and paper was made from cannabis hemp fiber. Colonial farmers such as George Washington and Thomas Jefferson grew tens of thousands of acres of cannabis, not just for fiber and other industrial uses, but also for medicinal and recreational purposes.

Oh, but how times have changed.

Today, the consumable form of the plant is illegal in the United Kingdom, and it would appear that British cannabis laws are where America’s were 35 years ago — i.e., total prohibition. And that’s not likely to change anytime soon, because the UK’s two major political parties both oppose cannabis legalization.

This aversion to legalization of the plant is further compounded by Britain’s mainstream media, which appears to be a cheerleader for prohibition. Indeed, recent Reefer Madness headlines scream:

Reefer Madness is even promoted at the very top of the UK’s government. British Prime Minister Theresa May recently suggested during a live Facebook Q&A hosted by ITV News that cannabis can lead to violence, mental illness and suicide. She further asserted that cannabis has no medical value.

“There’s a wonderful woman in my constituency, Elizabeth Burton-Phillips, who runs something called DrugFAM, which supports families,” May said during the Q&A. “One of her twin sons — they both started on cannabis when they were at school and went on to heroin, and one of her twin sons committed suicide. [Cannabis] has a huge impact on families.”

Before Prime Minister May becomes even more heated about Reefer Madness while continuing to deny its medical benefits, she may want to consult with Dr. Geoffrey Guy, an esteemed British pharmacologist and drug entrepreneur who runs a humongous government-licensed cannabis grow op in England.

Guy grows tens of thousands of specially bred cannabis plants, and extracts cannabinoids and terpenoids to make pharmaceutical-grade medical marijuana products marketed by his company GW Pharmaceuticals, which he founded in 1998 after his previous career developing opiate drugs.

The UK’s prohibitionist cannabis laws harm people a lot more than the plant ever has.

Six-year-old British boy Alfie Dingley suffers with severe epilepsy that has left him hospitalized for much of his young life. He has endured as many as 30 gut-wrenching epileptic seizures per day, and pharmaceutical medicines offer no help.

Unfortunately, the UK’s laws don’t allow for any medical use of cannabis. This forces Alfie’s mother Hannah Deacon to take him to the Netherlands at their own cost, where medical and recreational cannabis is legal.

Cannabis greatly reduces the number and life-threatening severity of Alfie’s seizures. But back in his home country, he is forced to live a life of torment without the medical marijuana that helps keep his seizures under control. Forced by public outcry and politicians to show some compassion, the British Home Office announced that it’s considering a temporary exemption or waiver to allow Alfie to use cannabis. But so far, no exemption has been granted, and it’s been weeks since the special license for Alfie was discussed.

The British Home Office states that it “remains illegal for UK residents to possess cannabis in any form,” and marijuana cannot be prescribed, administered or supplied to the public. It can only be possessed when its presence is needed for government-licensed research. This means Geoffrey Guy can grow tens of thousands of cannabis plants and extract the cannabinoids and terpenoids from them for profit, but the parents of a child who needs cannabinoids to stay alive aren’t allowed to have cannabis medicine for their son.

British society is far more prejudiced against cannabis than American society is currently. The government and media spread misinformation about cannabis, with such sensationalist claims in the Daily Mail that “the cannabis market is almost completely dominated by the dangerous super-strength ‘skunk’ variety blamed for triggering psychotic disorders.”

As a person who has lived in and grown marijuana in the UK and closely observed Brits as an anthropologist would, I can affirm that Britain is a nation that enjoys a drink. Going to the pub and drinking beer is a historic cultural ritual. Alcohol profiteers are a powerful political and economic force in the UK, and it seems they don’t want marijuana to be legal because it represents competition for their ethanol brews.

Prejudice against and misunderstanding of cannabis are common, even among the younger segments of the population.

While living in Britain, I shared bubble hash with a cannabis novice acquaintance. He got very high, was elatedly giddy and delighted, and thanked me for sharing the cannabis concentrate with him. He left my home to enjoy a couple of pints at a pub.

A few hours later, people were pounding on my front door, shouting profanities. Alarmed, I opened the door a crack to find a menacing gang of drunken men angrily cursing me for sharing “psychotic skunkweed” with their friend.

According to this surly group, their friend had apparently lost his mind due to the bubble hash, ran out onto a busy road, and was hit by a vehicle.

“He went bloody bonkers because of that shit you gave him,” one man shouted.

The men threatened to physically attack me and nark me out. “You better not ever share your filthy drug with him again or you’ll get a right beating,” one man spewed out, his breath so stinking of beer that it was enough for a contact booze high.

I was actually afraid for my life, and very nervous about their hostility, from a grower security perspective, but I managed to calm the angry men enough to ask for details of the incident. Turns out the guy I’d shared bubble hash with had arrived at the pub very happy and in full control of his faculties. He remained in a competent and responsible state of mind for a while, but over the course of an hour, he downed five pints of Guinness Extra Stout. He became incoherent and stumbled onto a highway, where he was injured by a glancing blow from a passing car.

I told the men that cannabis clearly didn’t cause this terrible tragedy; anyone could see alcohol had a part to play. I could see from their reaction that they had no way to deny the unavoidable truth of my analysis.

Fortunately, the man hadn’t been seriously injured, and in a few minutes his mates were ashamed and embarrassed that they’d accosted me.

What I found particularly ironic is that as they stumbled away, one of them lagged back until the others were out of earshot, and asked if I’d sell him some “skunk.” I laughed and said I don’t have any cannabis and never will.

My hope is they were too drunk to ever remember who I was or where I lived.

The bellicose mob that darkened my door with anti-cannabis rhetoric is echoed by establishment figures who enunciated a modern version of Reefer Madness propaganda.

Dr. Marta Di Forti, a scientist at King’s College London’s Institute of Psychiatry, Psychology & Neuroscience, recently told the British media: “In previous research we have shown that regular users of high-potency cannabis carry the highest risk for psychotic disorders, compared to those who have never used cannabis. The increase of high-potency cannabis on the streets poses a significant hazard to users’ mental health, and reduces their ability to choose more benign types [of cannabis].”

Another bit of propaganda comes from University College London’s Professor of Psychopharmacology Valerie Curran, who told the Science Media Centre: “Evidence from our own previous research at UCL suggests that high potency varieties are more likely to lead to addiction, so if the market is dominated by these varieties then this inevitably puts more people at risk of addiction.”

As one examines the media reports coming out of Britain and the so-called scientific statements from anti-cannabis crusaders blaming “addictive” cannabis for schizophrenia and acts of violence, you see a growing list of factual inaccuracies and unfounded assertions being reported.

For one thing, so-called skunk cannabis is a genetic derivative of Skunk #1, a strain first produced by Sensi Seeds. Skunk cannabis isn’t a strain most British marijuana growers cultivate, because cannabis growing is such a huge legal risk in the UK, and because many dwellings are council flats, tenements and row houses. Savvy growers avoid skunk cannabis because its intense, peculiar smell can’t be neutralized enough, so it can easily be detected and lead to a bust.

I cringe when I hear anti-cannabis crusaders blaming skunk weed for causing schizophrenia, because skunk is an indica-dominant strain that’s among the least likely to trigger any head high, racing thoughts, paranoia or anxiety.

There’s simply no reliable evidence proving that cannabis causes or even triggers schizophrenia or other serious mental health issues. These anti-cannabis campaigners repeatedly cite the same handful of schizophrenia and cannabis clinical studies, yet those studies don’t say what the campaigners claim they say.

The unbiased science on the topic indicates that cannabis contains compounds that may bind with neuroreceptors in some of the same brain areas that are associated with some forms of psychiatric illness, and that a small percentage of people who have a genetic predisposition for mental illness experience difficulties when they consume cannabis.

One such study is cited repeatedly by those who claim cannabis causes serious psychiatric illness. The study is summarized in a 1987 article in The Lancet medical journal, in which the researcher claims that a long-term study of conscripted members of the Swedish military indicated that cannabis use is correlated with schizophrenia. However, as any legit or budding scientist knows, correlation doesn’t equal causation. Other studies have shown that the Swedish study correlation was most likely caused by the fact that cannabis users are self-medicating to help them deal with mental illness, not that cannabis causes mental illness.

Another point to keep in mind is that Sweden is an ultra-prohibitionist country. Despite its reputation as a democratic socialist paradise, marijuana is 100 percent illegal there, so it’s highly unlikely that the Swedes examined in the study had access to a regular supply of strong cannabis of sufficient potency to negatively affect mental health.

In fact, if you carefully examine the body of research about cannabis and psychiatric illness, you can’t find even one study that proves cannabis causes mental illness.

Check out the below clip from King’s College London about the links between cannabis and psychosis.

Growing Cannabis In The United Kingdom

It takes considerable courage to grow weed in the UK. Police occasionally bust warehouses filled with hundreds of plants, but most UK cannabis is grown by small-scale home growers.

The UK’s Reefer Madness is out of step with some of its other national traits. In many ways, the UK is more progressive than the United States. It has universal health care, low-cost education all the way through to doctoral level, superior mass transit, and hardly any gun violence.

But when it comes to laws and attitudes toward cannabis, the UK seems forever stuck in 1937, with Reefer Madness attitudes embedded in government policy and in a substantial portion of the populace.