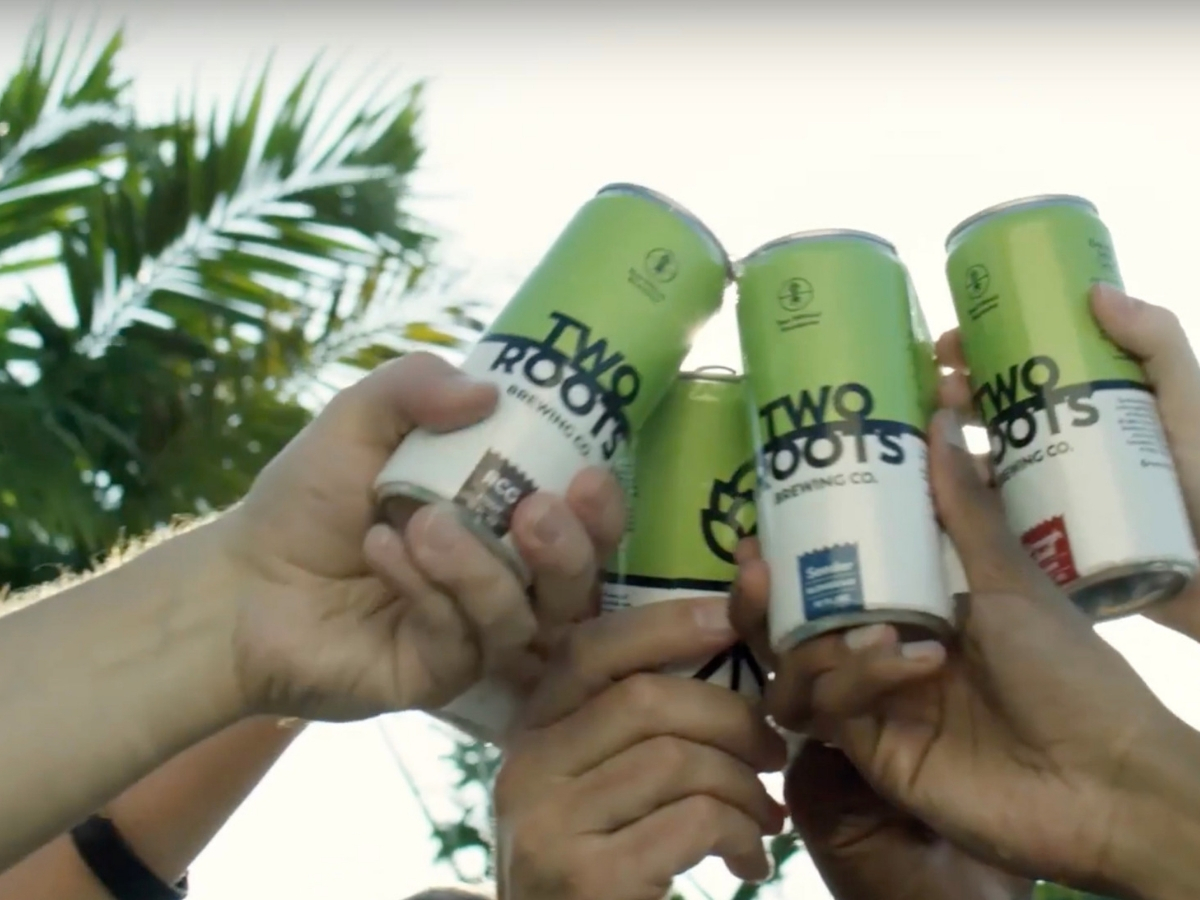 Cannabis beer is the hot new weed-based booze bandwagon everyone is jumping on. And in this rapidly expanding market, cannabis management firm Cannabiniers is making its mark by way of an artisan beverage with a big difference.

Having previously created cannabis-infused coffee and tea products, Cannabiniers’ new range of weed-infused nonalcoholic craft beers, Two Roots Brewing Co., claims the added bonuses of no hangover or damaging effects on your liver when consumed. And that’s coupled with fewer calories per unit, while providing drinkers with the alcohol-style buzz they crave.

President of Cannabiniers Timothy Walters said in an official statement, “We’re excited by the potential for Two Roots Brewing to be the first to market, offering products infused with THC [and] CBD, with the ultimate goal of normalizing the consumption of cannabis-infused products, especially given the recent announcements of potential development from the former Blue Moon founders and Constellation Brands, as well as its investment in Canopy Growth.”

Based in San Diego — California’s hoppy answer to Napa Valley — Renny Bowden, director of product development at Cannabiniers reveals how the brewing process works when it comes to his company’s booze-free cannabeer brand.

“We remove the alcohol and replace it with extract of cannabis. Two Roots contains a 3mg dose. We get a lot more of the cannabis going in there with this level — it’s about a five-minute onset, but a 15-minute full affect.”

While most edibles can take anything from 30 minutes up to two hours before you feel the effects, as a drinkable, Two Roots essentially offers a fast track to a natural high.

“This is going directly into your blood system through esophageal ingestion,” Bowden explains. “The goal is to mimic alcohol, because when you have a sip of alcohol, you start to get a relaxing feeling. It is the same thing with our cannabis beer. It will allow you to ingest it and really know where you are.”

The beer also allows consumers to control their high: “If you like it, you can stop,” Bowden explains, “but if you want to go further, you can. It is very much like a cannabis feeling — it is light and uplifting as well.”

Aiming for a healthy consumer experience that positively impacts the environment, Cannabiniers utilizes a sativa-dominant strain in its range of booze-free bud beverages. Bowden says of the effects, “It is very social and euphoric, and a little bit of a body high. The dose is the equivalent of a 5.5 percent beer beverage.”

This means that if drinkers want to have two or three beverages, they can do so, allowing them to control its effects.

“If you had too much of it, you would go in the direction of getting really stoned. But the thing is, when you get this kind of biofeedback right away, it stops you there as you know you feel good.”

This, the company says, is the main difference between Two Roots and other edible or drinkable products currently in the marketplace — the outcome achieved will always be the same and sustainable, without the usual variants people can often experience. 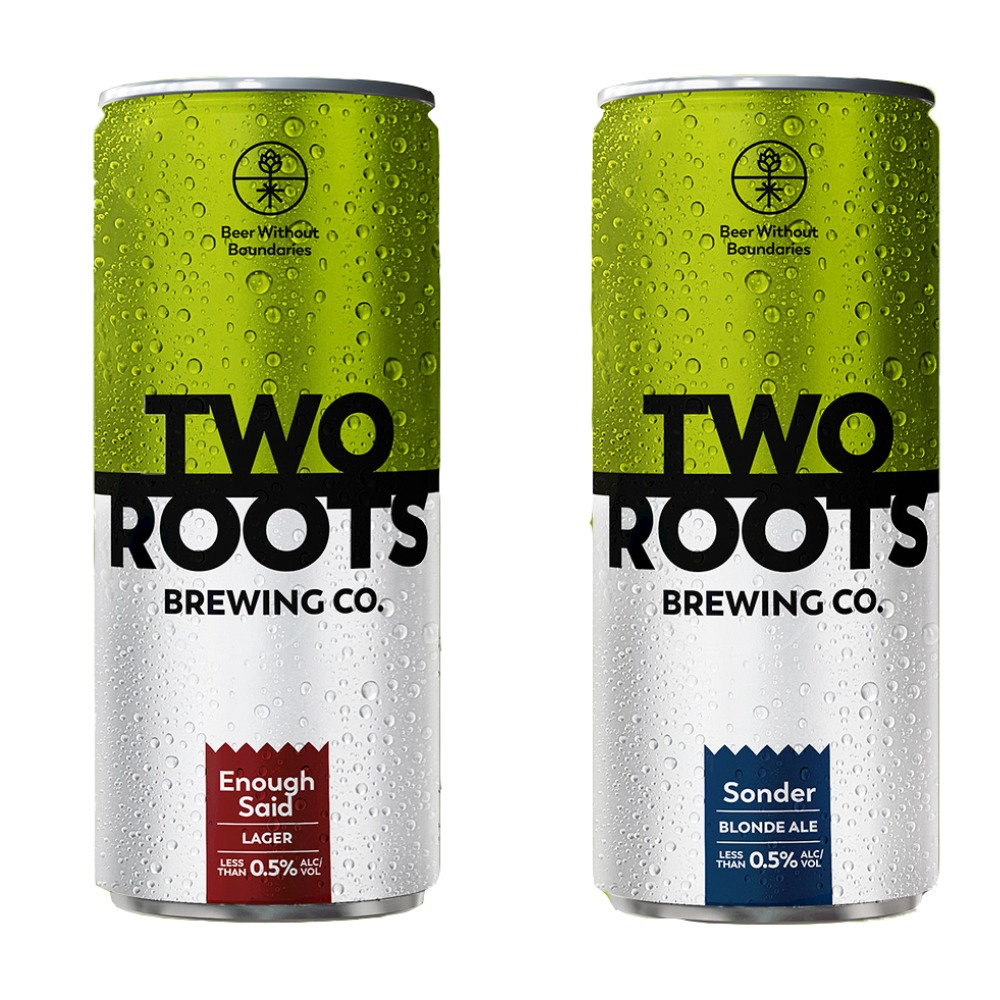 Cannabiniers came up with the concept for Two Roots around 18 months ago — but due to legislation and the constantly changing face of licensure, it has taken a minute to get the product legally off the ground. Currently, it is the only line of craft beer in the United States that uses state-of-the-art technology for de-alcoholizing its beverages. The company also ensures patented, safe and natural flower-based extraction processes to manufacture its products.

And due to the current laws stipulating that an alcohol license and cannabis license can’t share the same premises, after being brewed in San Diego, Two Roots is then infused with THC and CBD in premises based in Nevada and elsewhere in California.

Currently, the brand is offering five styles of beer, including a Lager, Stout, New West IPA, Blonde Ale and a Wheat beer. There are also future plans for a tribute-style beer that tastes like cannabis.

Given the federal limitations of cannabis, Bowden has plans for how he envisages Two Roots will be consumed, explaining, “In an ideal world, we would love people to be able to walk into a bar to get this. While we are still federally illegal, cannabis and alcohol are going to be separated, there is no doubt about that. But as certain states embrace consumption houses, we will have the opportunity there.”

Cannabiniers’ tea and coffee lines, Just Society and Brewbudz, utilize similar levels of cannabis in its products, but the coffee contained within also delivers a caffeine high.

However, these Cannabiniers brands that have hit the market are available through licensed dispensaries only. “There really should be a social alternative. We will take it one step at a time,” Bowden says of the strict parameters when it comes to selling and consuming cannabis-based products. “I would love people to be able to have it on tap. But at the moment, if someone goes to a barbecue, while some people will have a six-pack, you should also have the opportunity of Two Roots as an alternative.”

Always with an eye to the future, Bowden and company are looking next to branch out into Canada, as well as the UK and Germany.

“In Germany, I have spoken to some of the brewmasters there and they love what we do, they absolutely dig it,” Bowden says excitedly. “I think Two Roots is definitely a big future alternative [to boozy beer]. It gives that great social lift. Plus, you are eliminating half the calories — you are getting rid of the alcohol, which creates disease in the body.

“You don’t have hangovers,” he asserts. “A couple of hours into it, you are done with that high and it is out of your body. It doesn’t even make it to your liver, so it is much, much easier [on your body]. So far, we have seen is an incredible acceptance of what we are doing and everyone is very excited about it.”

For information on Two Roots Brewing Co. beer, including where to purchase and investment opportunities, visit the company website for updates.

In Bloom: How To Use The Powerful Supplement Nirvana To Maximize Your Cannabis Crop
Wine And Weed 101: On The Intoxicating Trail In Northern California