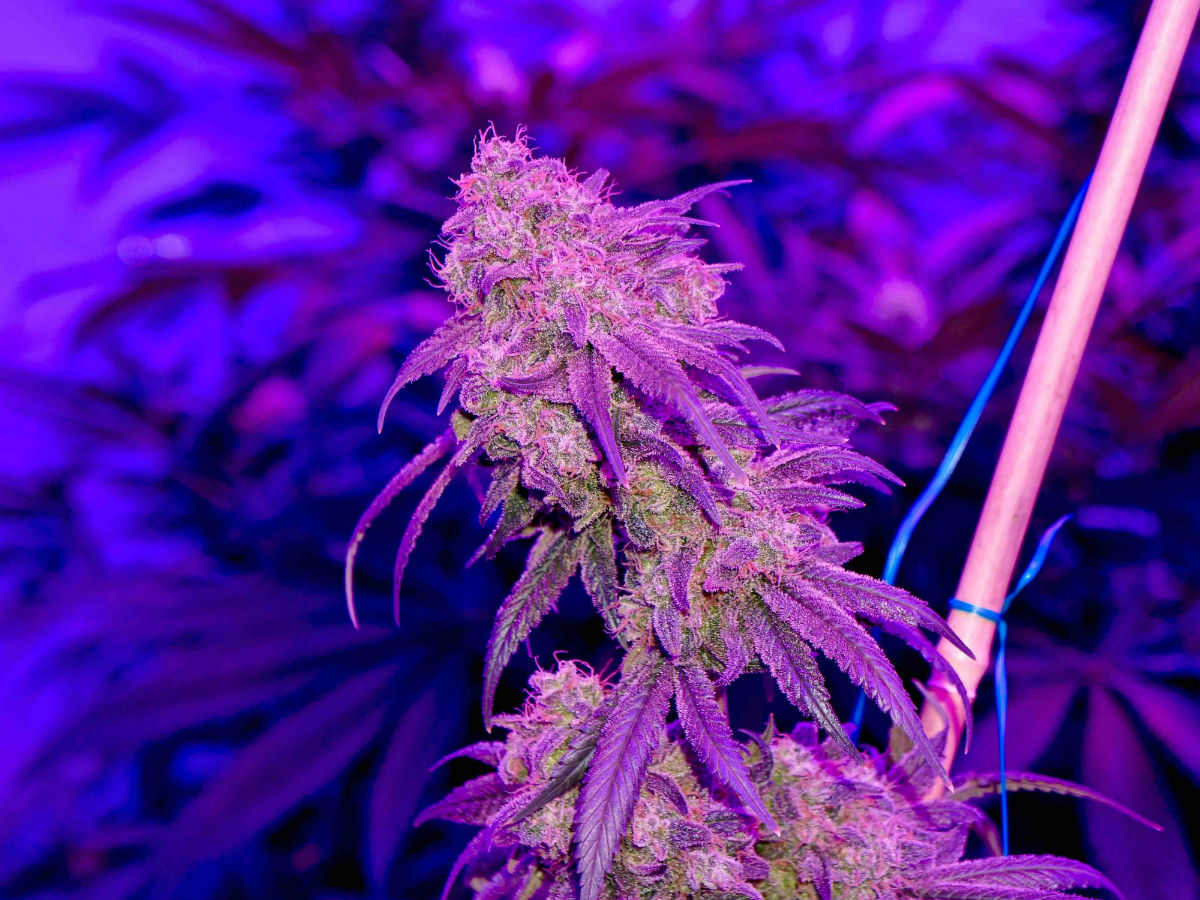 What brand of LED grow lights produced these beautiful buds?
By Steve Davis | Published: May 23, 2016

We’ve gotten lots of grower response to our continuing series on Lush Lighting LED grow lights (the only LED grow lights made by a manufacturer who acknowledges the needs of marijuana growers).

Someone sent us a YouTube video apparently posted by an LED company called Kind LED.

In that video, a Kind LED sales rep states his opinion that Kind LED is superior to Lush Lighting LED grow lights.

On the Kind LED YouTube channel are several videos in which Kind compares itself to high pressure sodium (HPS) HID grow lights, as well as competing LED grow lights brands.

The videos have impressive graphics, colors, and animation.

The grower who sent us the video said he was disappointed that the Kind LED website and videos never mention the words marijuana or cannabis, or show marijuana plants being grown.

This contrasts with the Lush Lighting approach.

In fact, Lush Lighting was founded by legal medical marijuana growers who openly acknowledge that Lush LED grow lights are made to maximize the health, yield, and potency of your marijuana plants.

Here’s a highly-useful question and answer session about the LED grow light industry with Matt Johnson of Lush Lighting:

BigBudsMag.Com: Matt, please tell growers about your insider knowledge of the LED grow lights industry. And what’s your reaction to that Kind YouTube video that compares your grow lights with their brand?

MATT JOHNSON: First of all, realize that my passion is making LED lights so all of us can grow better and more energy-efficiently than ever before.

Like you, I started using LED grow lights because I believed in what I heard about them.

It cost me a lot of money and worry to find out the hard way that the LED brands I bought just weren’t good enough for my plants.

I couldn’t find the lights I wanted to grow with, because nobody was making good LEDs… so I decided to make LED lights myself!

It’s not ego or greed that makes me explain that Lush is the only company that makes LED grow lights for cannabis plants.

My reason for telling you is the same as when growers get together and share buds and grow strategies– we love growing and we tell each other about grow gear that produces fat, sticky, potent buds.

The grow light industry? Well, I heard someone at a hydroponics trade show say the LED grow lights industry is a shark tank.

I’ve heard from so many growers disillusioned with LEDs because prominent LED companies treated them badly, ripped them off, broke their hearts.

When I created my LED company, I vowed to treat growers with the utmost respect.

That’s why Lush Lighting does proprietary cannabis-specific research nobody else even understands.

That’s one reason we have a worldwide following of serious marijuana growers.

Yeah, you could see a brand of LED grow lights winning some big-name award, or people are going on and on about them at ICMag, and you might think that means something.

Well guess what… you can’t always trust what you hear or read.

For example, did you know that some marijuana cultivation forums secretly demand that a hydroponics gear manufacturer financially compensate them?

We had situations when forums basically asked us for a bribe.

We said no, and guess what happened? Dozens of our grower friends lost their accounts on marijuana forums just for trying to share their positive opinion about Lush Lighting.

You can’t always trust forums or pot magazines, but there are ways to see what growers really think.

For example, Lush Lighting has been hash-tagged 8,640 times on Instagram and has 4.8 of 5 stars from 290 reviews on Facebook.

And BigBudsMag.com has been writing about Lush LEDs for several weeks now.

The editor came to us and said, “Our magazine’s grow team tried all the LED grow light brands, and yours are way outperforming the others, so we want to tell our readers about you.”

I seriously commend BigBudsMag.com for the total honesty of its journalism and its assistance to cannabis gardeners everywhere.

Regarding the Kind LED video, they made the video without talking to us.

Maybe they believe what they’re saying, who knows? I don’t like to be blunt or confrontational, but growers deserve to know the real truth if you’re comparing Kind lights to ours.

Start with the fact that Kind LED is just one of many LED grow lights companies that design their lights to produce a light spectrum that replicates something called “the McCree curve.”

The McCree curve was introduced by plant physiologist Keith McCree in 1972 after he studied the light absorption characteristics of 30 species of plants.

Unfortunately, McCree didn’t perform his study on cannabis, so his theory is outdated and inappropriate for cannabis because it fails to factor in that cannabis is more efficient at photosynthesis than other plant species.

Marijuana plants’ light spectrum needs are different than those for other plants, and these needs change during the course of its life.

Kind LED lights have spectrum outputs similar to many brands of LED grow lights, and they all mimic the McCree curve—which is not the right spectrum to maximize cannabis plants’ performance.

I also have to point out the many technical flaws in the Kind LED video.

The video’s data sets have errors and contradictions obvious to most viewers who understand the science.

According to Kind’s measurement of intensity on the perimeter of the light footprint, their K5 XL1000 produces PAR of 101 at two feet, goes up to 199 at three feet, and then is 189 at four feet.

Problem is, it’s impossible for light to remain consistent, or even increase in intensity, the further you measure it from the source, as their video would have you believe.

They also make a big mistake by keeping their PAR measurement device pointed straight upwards during all measurements.

That works for measurements taken directly under LED lights but not when measuring perimeter intensity.

To use an analogy, if you’re using a meter to measure the light intensity of the sun, it’s only appropriate to point a light meter directly straight up in the sky when measuring the sun directly overhead at noon.

But if the sun is very low in the sky in the east or west, it’s no longer appropriate to point the light meter directly upwards.

The light meter needs to be pointed east or west directly at the source.

In the Kind video, they take light measurements on the perimeters, without pointing the light meter directly at the source.

I also call attention to Kind saying it’s a plus that their LED grow lights have a user-adjustable spectrum.

What growers tell us is that user adjustment to the Kind LED light spectrum is achieved by dimming light output on specific diode sets.

They ask the logical questions: what good is a 650w LED light if you have to selectively lose output to create different light spectrums?

Why bother with grow lights that force us to guess for ourselves what the right light spectrum should be?

They like it way way better that Lush LED grow lights are specifically tuned to produce optimal spectrum to grow healthier, more productive plants, with absolutely no guesswork involved!

The bottom line is: bigger buds with more terpenoids and cannabinoids, that’s what you get from Lush Lighting. Kind can’t say that.

We’ve challenged all other hydroponics lighting companies to accurately say in public that their LED grow lights can give you the stronger plants and bigger, stickier harvests that Lush LED lights provide you as a marijuana grower.

They can’t say it, because it’s not true. That’s why you never see any other LED grow lights manufacturer explaining how their grow lights serve the needs of cannabis growers.

Yes you can get a crop from start to finish using other brands of grow lights.

The cannabis plant is very forgiving, and generous. It can handle all kinds of abuse and still give you a decent harvest.

But when you want your best harvests using lights tailored for your plants so you get more cannabinoids in a shorter time for less money, you use Lush Lighting.

Our team here at Lush Lighting, a family business homegrown in the Midwest USA, has produced the only brand of LED grow lights that exceed growers’ highest expectations!