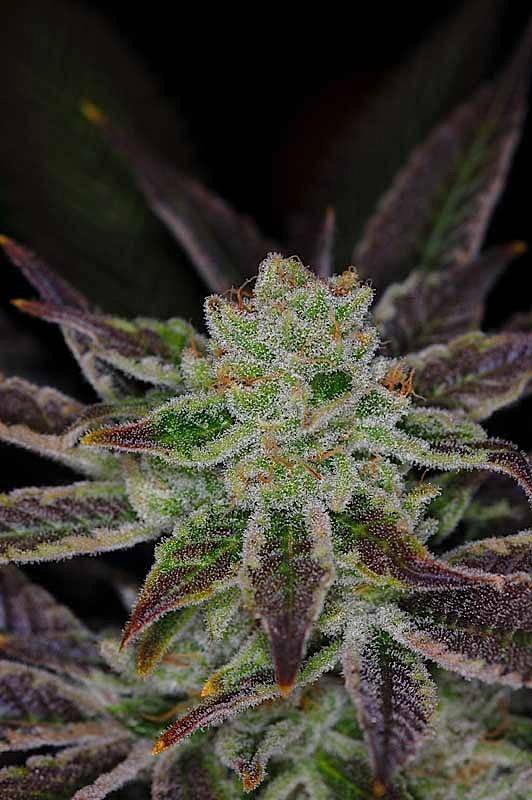 By Subcool | Published: September 6, 2011
I heard of the strain Trainwreck way back when I was still smoking brown imports. It was spoken about like it was the long lost epic weed and I always hoped I would get the opportunity to work with a clone or hybrid of the medical marijuana cross.

The first time I actually got to sample the bud was traveling from Arizona to Humbolt county to visit a friend who had invited me up. The weed scene in Prescott was horrible and we were used to smoking dirt weed about 50% of the time. I will always remember how as I traveled north, the quality of weed got better and better. I was broke and on the run back then and I traveled the way many people in those circumstances did—I rode the Dog!

You meet some colorful people when you ride on a Greyhound bus and this trip was no different. In Vegas a couple got me high on some nice green outdoor, but by the time we hit northern Cali at a rest stop a dude broke out a nice glass pipe full of Bubblehash and I knew I was headed in the right direction.

As I talked with this cat he told me he was from Arcata and had been down south visiting a relative and was on his way back home. He gave me a nice hunk of indoor since I wasn’t holding and as we re-boarded the bus I thanked him and ask what kind? He says it was Trainwreck bud and gave me a big old grin that said without words I wouldn’t forget smoking his gift. Once I actually got to my destination I was pretty impressed that dudes bud was better than anything I smoked while visiting my friend, including the Salmon Creek Big Bud and other local strains.

Once I finally moved out West and started growing out all the famous West Coast genetics I met a young guy who gave me cuts of Purple Urkle and Arcata Trainwreck and I grew both of them out. We still grow and love the Urkle cutting and used it to create our cross called Querkle, but the Trainwreck was a different story. The final bud was very potent, there is no doubt of that, but from a growers stand point, the plant was very tall and very picky—producing male stamens (Herms) as early as week six of budding. It also had a woody acrid taste that I couldn’t get past. This taste, I learned, is what Train \wreck is known for, but as I tasted other samples I learned there are at least a few different cuttings of the plant. In my book, Dank, I detailed this particular cutting on page 88, but after growing it to harvest several times I decided not to breed with it and to stop growing it.

Last year, my best mate, Dioxide, ran across a cutting found by Smokescreen. Story goes he scored a nice sack of Trainwreck buds grown by a cat that had been growing the Trinity and the Trainwreck for sometime. Smokescreen found a few seeds in the sack and grew them out, finding one female that was exceptional.

Dioxide was given a cutting of this female and started running it at his place. All three of us are legal card holders under state law and we trade cuttings pretty regularly with people that need better genetics or something for a specific ailment.  So while I am not a fan of Trainwreck myself I know incredibly potent weed when I see it, and this was some of the most potent I had smoked in a long while. Turning a dark maroon (almost black) color, the plant is completely covered with raised resin stalks crowded together so tightly they seem to form a web of entwined glass beads. The plant is also virtually mildew proof. This trait is very desirable to those growing outdoors in wetter climates.

This particular cutting has another unusual trait in that she will turn almost completely black in color by harvest with just a minimal temperature drop between light and dark periods. Dioxide has mastered this technique and his is fully transformed into a Black Red by harvest. At first, the leaves will fade from green to red, then maroon and finally a deep blood color. We added the prefix to distinguish this cutting from the Arcata or any other Trainwreck cutting. Everyone out West seems to have a cutting they favor. No one really knows the origins of any of them, but the taste of the strain is unmistakable and the very first hybrid we created using our Blood Wreck tested at 22.01% THC which is very high.

The strain’s most important trait to me was its stability. Unlike other cuttings, this one does not produce hermaphrodites even under stress. It tolerates my hot soil and thrives at high PPM levels of nutrients. Outdoors, it’s slightly effected by high temps and gets wrinkled leaves, but this only happens at temps above 95°F and does not seem to effect the flowering phase.

When we share some of the finished flowers with seasoned Trainwreck smokers they are always very impressed and blown away by the resin production. The dry buds look like they’re covered in glass dust but are nothing more than but organic cannabis.

Thanks to Dioxide for pointing out this amazing cutting and urging me to work with it.

BLOOD WRECK by the Numbers:
The most stable Trainwreck cutting I have ever grown out with crippling potency!