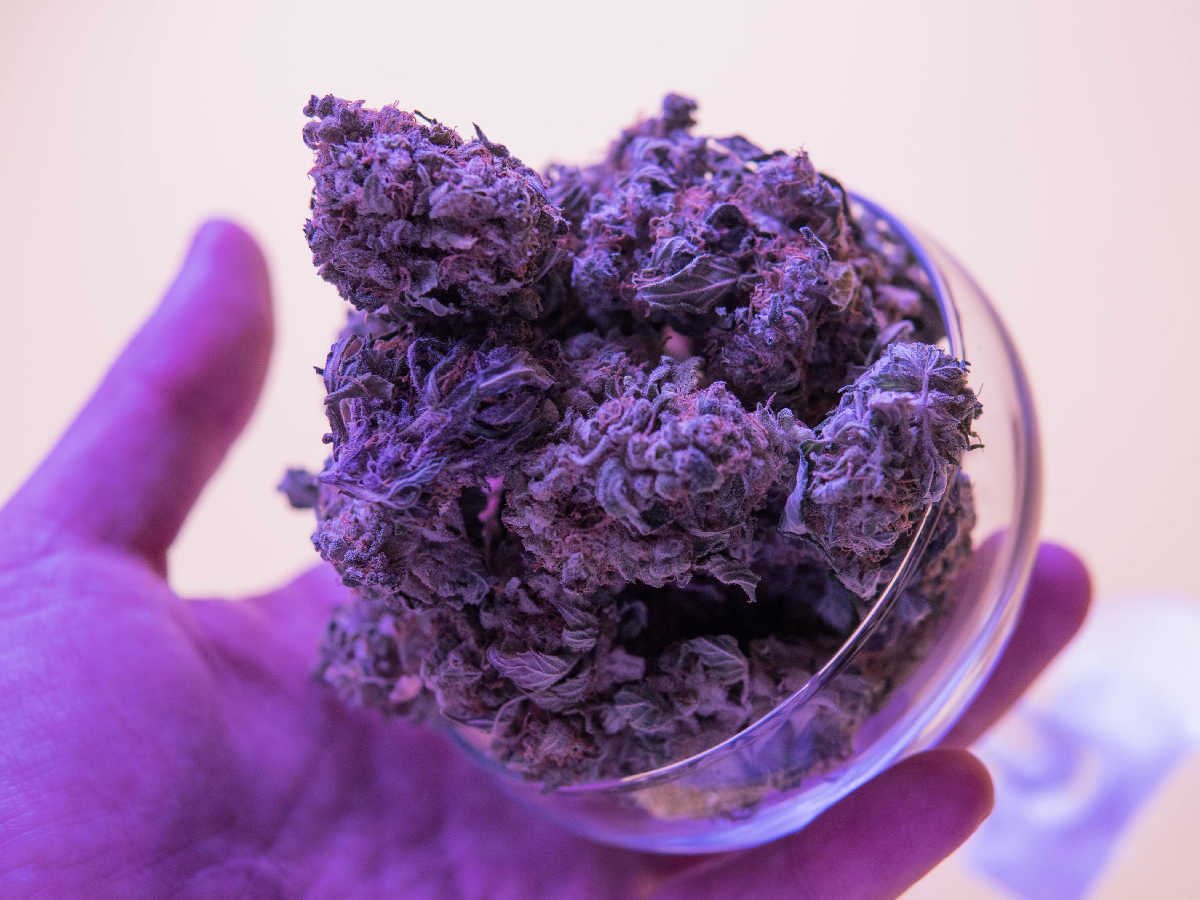 Call it the stoner equivalent of the Glassybaby, as new and fashionable cannabis products hit the retail pot accessory market from coast to coast in the US, raking in beaucoup dollars.

Producers of nuevo weed paraphernalia — specifically aimed at marijuana stalwarts with an eye toward stylish design and with plenty of cash to burn — are creating functional works of high art with superior quality that are in high demand.

In a world of collector bongs selling for $100,000 apiece, and chic cannabis dispensaries like “the Apple Store of cannabis” MedMen, it makes perfect sense that today’s head shop experience is becoming more Restoration Hardware and less lazy hazy head shop.

So, it should also come as no surprise that there’s a pop-up shop to cater to that.

“I can’t describe how awesome it feels to see marijuana pop-up stores happening,” says Los Angeles native Kylie Earnhardt. “And to see pot rise to this level of sophistication. It makes total sense, right, because cannabis is definitely becoming a boutique experience.”

Members of the evolving pot community, says Earnhardt, are figuring that if foodies and handbag designers can do it with pop-ups, then “why not sellers of artisanal weed accessories?”

While the pop-up store was not for the faint of wallet — featuring lavish, pot-centric items like the Hiro Clark “JUST SAY NO” T-shirt for $128, or the Craighill maple rolling tray for $135 — there’s no denying that buyers out there are willing to pay top dollar for top-shelf cannabis equipment. 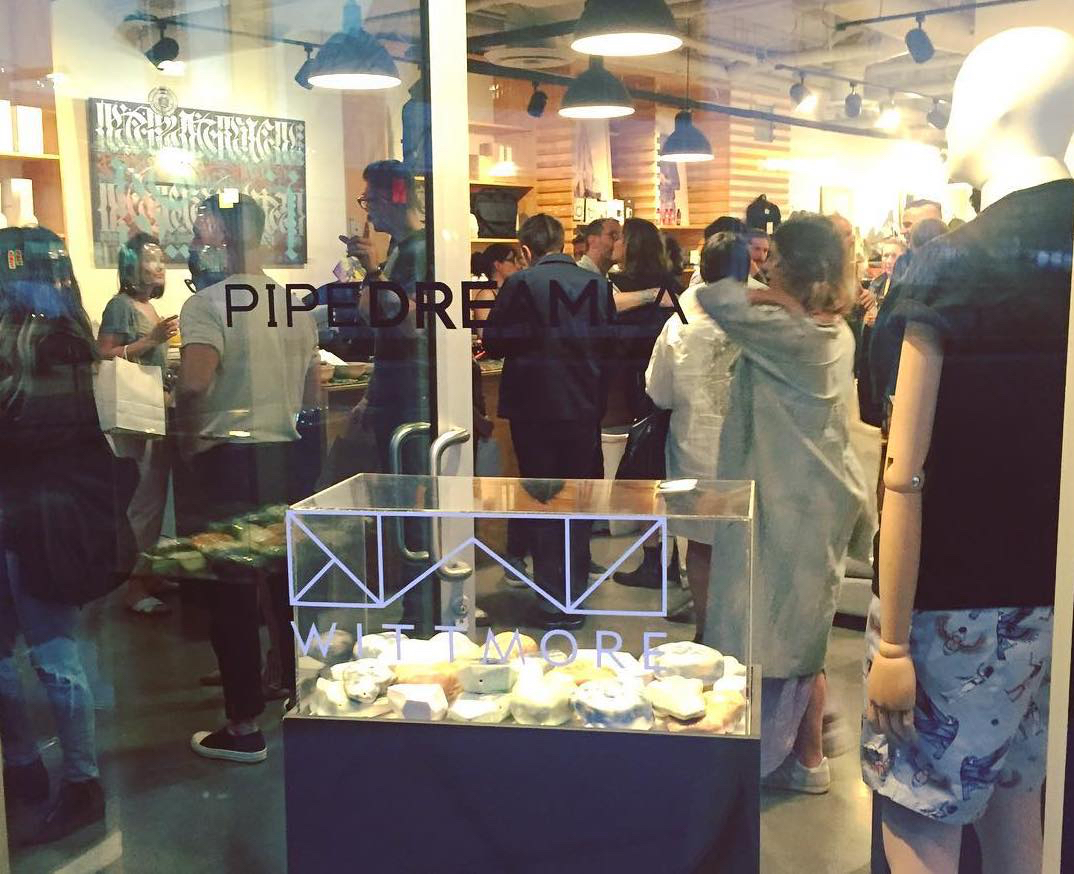 Though price tags in that range may seem sky-high for the average Jane or Joe pot smoker, Brooklyn local Matt Tanney — a self-described “cannabis accessory nut” — says he’s willing to pay dearly for collectible pot products that have the added bonus of great functionality.

“It’s about the experience for me,” says Tanney. “I’m OK with paying more for quality, like for a really beautifully designed water pipe. Because I get to experience its beauty every single day.”

Tanney explains that he’s drawn to water pipes like those available from KGB Glass by Portland, Maine glassblower Brian Owoc. His hyperreal glass pipe sculptures shaped like donuts have been a sensation in the cannabis water-pipe smoking community for years, with some selling for thousands of dollars apiece.

In fact, Owoc’s work is so popular, he’s hosted his own kind of pop-up store/event, like this year’s Donutfest 5, an annual showing of KGB Glass donut-themed art, with collabs that include showings from other glassblowing stars including Niko Cray and Purdy.

“I’m saving up to buy some KGB Glass,” says Tanney, who makes a point of adding that he’s not some rich guy with loads of money to burn. “It’s really incredibly fine and intricate glasswork that really speaks to me.

Tanney says part of the experience of buying these luxurious items is the story behind the creator himself.

“I just love how [Owoc] was a baker at Dunkin’ Donuts for a lot of years early on,” says Tanney. “And he would go home and blow glass at night, and donuts were always on his mind from working with them all the time. So he’s a guy like me, just a working guy like me who eventually created all of this great glass pipe work. I can really connect with that.”

It’s those connections with sophisticated artisanal works — like buying one-of-kind clothing or fine woodworking on Etsy — that’s driving the inception of cannabis pop-ups.

The developing cannabis industry is also seeing a connection between dispensaries and smoking shops, as with the Mid-City, Los Angeles dispensary The Pottery coupling with upper-crust smoke shop Higher Standards, which has its flagship store in Manhattan’s Chelsea Market. The powerhouse pair is scheduled to run their cannabis pop-up in the LA dispensary through August and offer curated selections of goods from high-end makers Storz & Bickel, Malin + Goetz and Jonathan Adler, as well as Higher Standards’ own line of understated borosilicate glass water pipes and cleaning kits.

“It’s a really great thing for the cannabis industry,” says Earnhardt. “These stores appearing show people that pot products are really quite elevated these days.”

According to its website, Higher Standards is “changing the face of retail and branding in the [cannabis] industry,” adding that its products are “created to provide aficionados with the tools they need for the most elevated smoking experience, from premium care and maintenance products that ensure the best flavor from your material, to exclusive and specialty accessories.”

And that’s really what we’re talking about here — elevating the cannabis experience to the level it deserves — the inevitable next step for the billion-dollar junction where weed meets capitalism.

Coco Loco: Five Facts About Cultivating Cannabis In Coco Coir
The Bigger Bhang: Ayurveda Aphrodisiac Techniques That Use Cannabis For A Boost