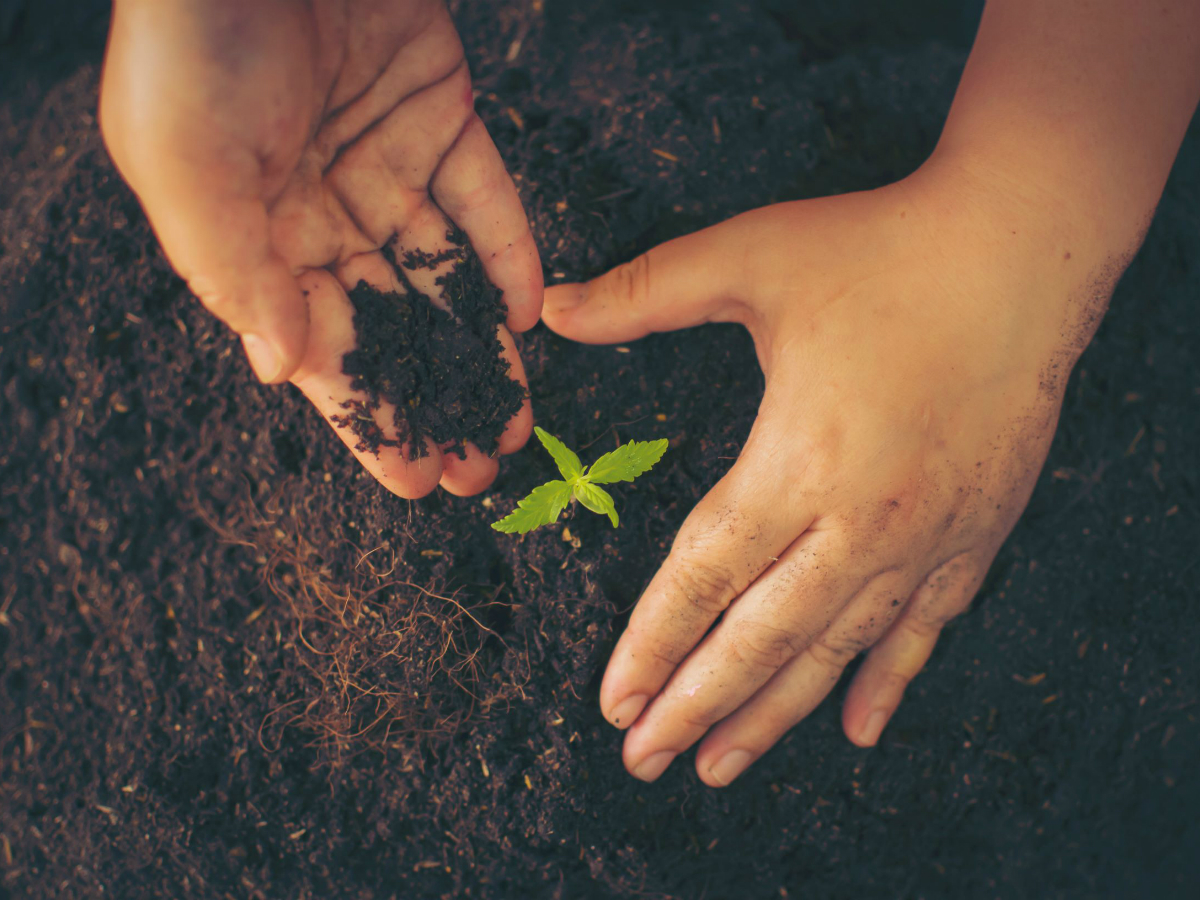 As a cannabis gardener, it’s hard to think of anything more satisfying — that is, apart from growing big, beautiful, trichome-covered buds — than sticking your hands deep in warm soil. But with the conveniences of hydro systems and soilless media, a decreasing number of growers are choosing to go the old-fashioned route. If you’re deciding whether to go hydro or soil for your next grow, it can be a tough decision because there are arguments to be made for both cultivation styles.

Soil offers all kinds of advantages: It’s filled with beneficial bacteria and fungi, it’s environmentally friendly, it’s affordable, and cannabis that is grown in soil has superior terpene content. However, those benefits come at a price. Soil is heavy, it can have issues with pests and disease, and it has diminished moisture retention compared to other grow media.

So, let’s dig in and discuss the pros and cons of soil. If you’re one of those growers on the fence between hydro- and soil-grown cannabis, maybe this will help you choose the method that’s right for you.

Pros To Growing Cannabis In Soil

Soil Is Brimming With Beneficial Bacteria

When it’s correctly formulated, soil is brimming with beneficial bacteria for your plants. One naturally occurring bacteria that is particularly helpful is the plant-growth-promoting rhizobacteria, or PGPR. According to a study published in the Annals of Microbiology:

PGPR have the potential to contribute to sustainable plant growth promotion. Generally, PGPR function in three different ways: synthesizing particular compounds for the plants, facilitating the uptake of certain nutrients from the soil, and lessening or preventing the plants from diseases.

PGPR has a symbiotic relationship with plant roots, and it helps enrich the soil surrounding the plants. Not only is PGPR naturally occurring and plentiful in some soil, but it is also highly habitable for these helpful bacteria.

If someone says that soil is alive, they’re not entirely wrong. In addition to beneficial bacteria, soil contains beneficial fungi, which provide plants with a large number of advantages when present in the soil. One particularly helpful fungus is mycorrhizal fungus.

Mycorrhizal (AM) fungus helps plants with drought resistance. A study by the European Journal of Soil Biology explains the role of mycorrhizal fungus in creating drought-resistant plants:

[The study] concluded that AM fungus colonization enhanced plant growth under drought stress indirectly through affecting the soil moisture retention via glomalin’s effect on soil water-stable aggregates, although direct mineral nutritional effects could not be excluded.

In addition to helping plants become drought resistant, mycorrhizal fungus helps with metal detoxification and in breaking down organic matter to make the soil more nutrient dense. Beneficial fungi are another reason healthy, super-charged soil will give your cannabis plants serious natural nutrition.

Soil is an abundant natural resource. Without soil, we wouldn’t have food, and without food — well, you can guess where that would leave us. When it comes to sustainable grow media, it’s difficult to beat soil — especially when you build your own compost and soil blends using organic material like kitchen and plant waste. Not only are you saving other resources from use, but you’re building up a precious natural resource that gets lost every year due to irresponsible agricultural farming practices.

There are plenty of perks to growing cannabis using soilless media, but the equipment and materials necessary to do it right can add up to big bucks. It’s especially pricey to grow soilless if you’re starting from scratch. When it comes to soil, however, growers have a lot of economic options. You definitely don’t want to buy random discount soil for your precious plants, but there are still plenty of affordable ways you can obtain, or create, soil.

If you’re growing outdoors, you can make your own supercharged soil practically for free. Outdoor growers have the luxury of making their own compost, gathering soil samples from nature, and tilling the soil in their own backyards. Indoor growers have to be a little more careful, however, to be sure their soil is extra sterile. Still, cannabis cultivators can shop around to find high-quality ingredients and make their own affordable and supercharged soil blend.

When it comes to quality, perhaps the most compelling reason to grow cannabis in soil is more and higher quality terpenes than that grown using other methods. Soil-grown cannabis, particularly cannabis grown outdoors, benefits from the chemical makeup of its soil. While terpenes are dependent on the strain and individual genetic makeup, high-quality soil can bring out the best in cannabis and its terpenes.

As another advantage, outdoor, soil-grown cannabis plants benefit from terroir, which refers to the signature scent and flavor a specific region imparts on its crop. Terroir typically pertains to winemaking, but outdoor cannabis growers are beginning to take note of the concept as well. As cannabis connoisseurs and cultivators know, the same genetics can taste, smell and look vastly different, depending on where and how it’s grown. Soils in different regions contain different minerals, and even the bacteria present can affect how cannabis tastes and smells. It’s certainly romantic — and scientifically sound — to imagine that environmental factors would have an effect on the flavor and scent, and thus terpene content, of cannabis. 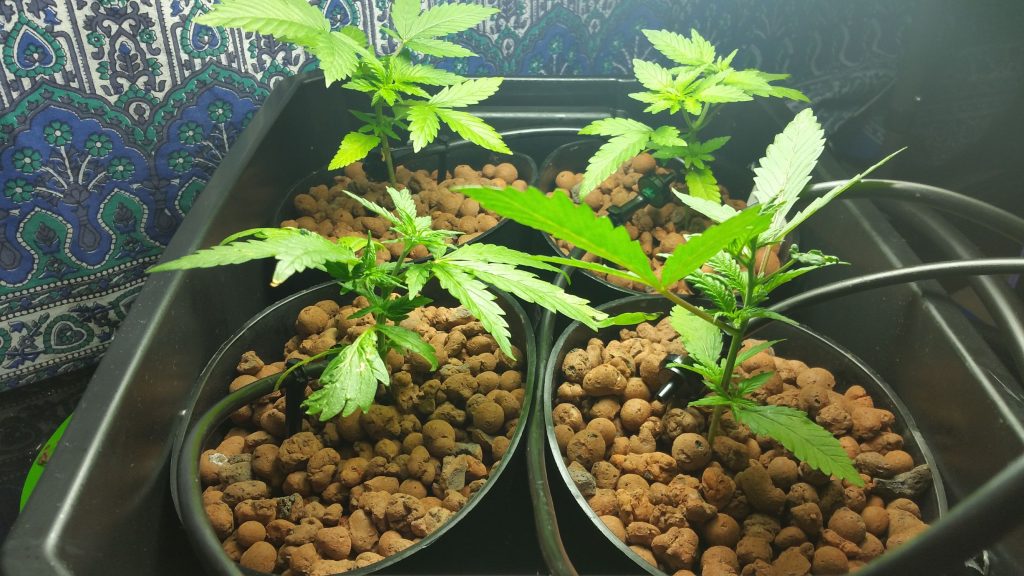 Cons To Growing Cannabis In Soil

Soil Can Be Heavy And Cumbersome

It doesn’t take a scientific study or agricultural know-how to realize that soil is heavy. When compared to soilless media like perlite, coco coir or peat moss, soil weighs a lot. In addition to being hard on your back — those store-bought bags aren’t easy to lug — it’s also tough on the environment. The heavier the media, the more fossil fuels it takes to move it. That doesn’t exactly negate the positives when it comes to soil’s environmental impact, but it definitely counts as a con.

Soil Can Be Filled With Pests

While soilless media isn’t without its blights and bugs, it’s certainly easier to manage and more difficult to encounter them when you’re growing without soil. There is no foolproof method to avoiding pests altogether, and any time you grow with soil, you run the risk of contaminating your grow op and introducing new garden invaders with every new batch of soil. This is why, if you do choose to grow with soil, you have to be sure to select your dirt carefully and be sure to know your source.

Soil Is Ripe For Disease

As with pests, there is no foolproof method to completely avoid disease in your cannabis crop. But the fact is, no matter which hydro method you use — from aquaponics to deep water culture — there’s more control, which helps reduce risk. As long as you keep your equipment and water clean, it’s much easier to avoid disease when you’re growing with a hydro system as opposed to soil.

While it may seem counterintuitive that growing with soil uses more water than hydro, that’s not the case. Hydro systems recirculate water, whereas water from soil-grown cannabis is typically not reused, or at least not immediately. As a result, growing cannabis with soil typically takes more water, particularly because cannabis prefers a well-draining soil, so the water doesn’t stick around long to keep the roots moist. In states like California, Colorado and New Mexico, where water is an increasingly scarce resource, any amount of water you can save is well worth it. That said, with a little elbow grease, dirt growers can save their drained water as well; it’s just not built into dirt-growing systems like it is with hydro.

When it comes to growing cannabis, there are as many methods as there are growers. While some methods are certainly more effective than others, there are still many trails to the same destination, which is growing big, beautiful buds. So, if you’re trying to decide whether or not soil-grown cannabis is right for you, consider the perks and pitfalls, your own personal abilities and constraints. And no matter what you choose, as long as you end up with some tasty nugs, you can consider it a win.

Cannabis Stock Photographer: A Career Ripe For The Picking
Taking Care Of Dispensary Business In This Competitive Cannabis Market