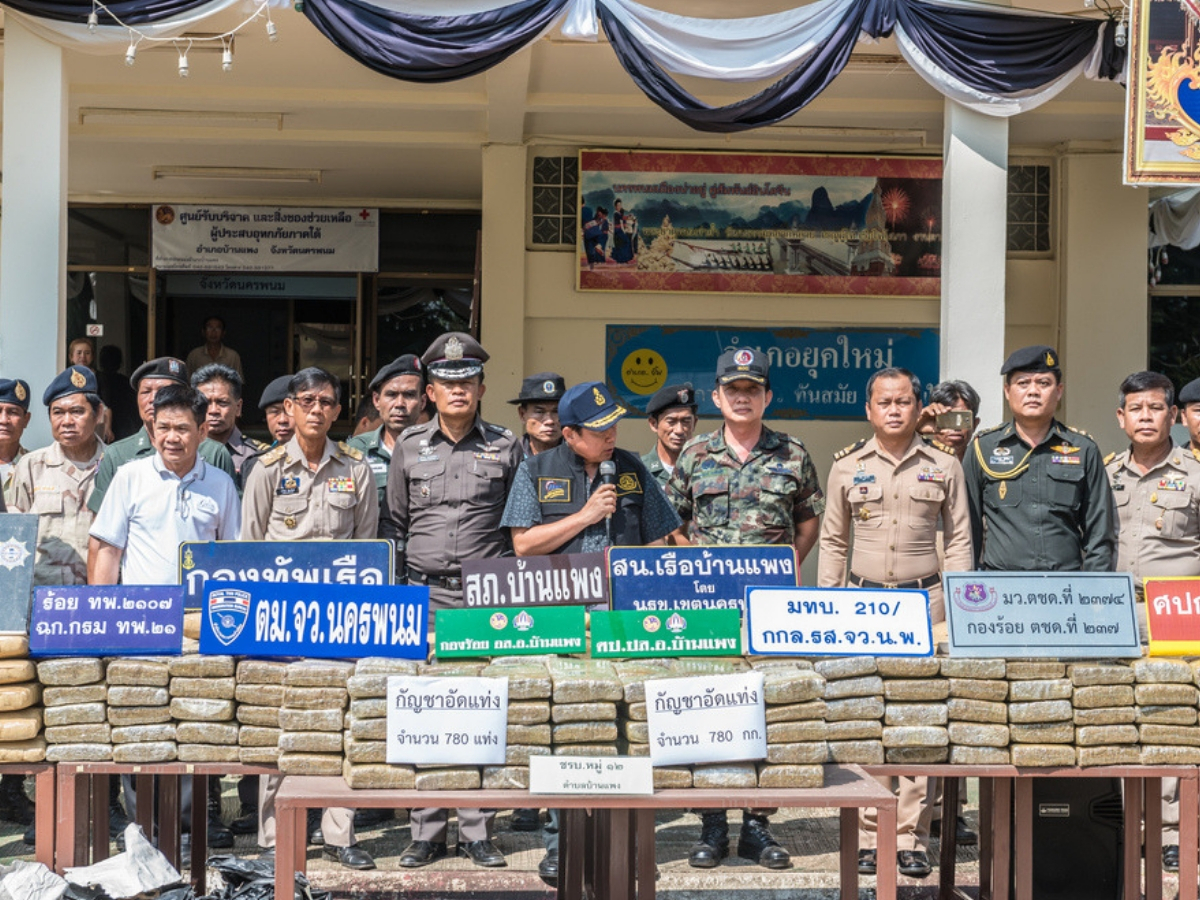 May, 2017: Police in Thailand’s Ban Phaeng district, located on the border of Laos, show off their haul of more than 1,000lbs of compressed cannabis seized from drug traffickers.
By Joshua Jacob Mezher | Published: November 8, 2018

While drug laws in the United States have gradually become more lenient, regulations in Southeast Asia remain on the opposite end of the spectrum. The death penalty has long been meted out for drug-related crimes in several countries on the Asian continent, including Indonesia, the Philippines and Malaysia. However, the government of Thailand is contemplating a new law that could turn the tide of harsh drug enforcement in the region, legalizing medical marijuana and thus opening the door for a more relaxed enforcement of cannabis laws.

A draft bill about to be considered by the National Legislative Assembly of Thailand (NLA) could allow cannabis to be used for medical purposes, similar to laws seen in Canada, Germany, and a growing number of US states. Presented by Jet Sirathraanon, the assembly’s chairman of committee of public health, the bill will be heard for the first time in around one month.

Officials in the Thai government emphasize that cannabis would be available for medicinal purposes only. In addition, the motivations behind the law appear to be strictly economic. As Sirathraanon points out, Thailand has a thriving drug trade that could instead be taxed and used to bolster the economy.

“I’m doing this because it’s an opportunity for Thai people,” he said, according to Agence France-Presse. “Thailand has the best marijuana in the world.”

Despite being among the nations with the strictest drug laws, Thailand’s cannabis has for decades been known for its high quality, with tourists from around the globe flocking to the Southeast Asian country to partake.

The proposed draft bill so far has proven immensely popular with the Buddhist-majority population, in part because it offers a way to improve the standard of living in the nation’s emerging economy, which is largely built around tourism, manufacturing and agriculture. However, many Thai officials remain reticent to scale back on drug laws when the government has for so long been steadily moving in the opposite direction. As many point out, the currently illegal drug trade in Thailand has brought unsavory criminal elements to the otherwise peaceful nation. But cultural pressure from the West and economic pressure from within may soon sway the minds of anti-drug government hard-liners.

It’s no surprise that the policies of the West can affect far-flung regions around the globe. In the few years since Canada and several states in the US began legalizing medical marijuana, other countries have followed suit. Medical cannabis is now legal in the likes of Peru, Israel and Croatia. Interestingly, it remains illegal at the federal level in the United States, while fewer than half of US states do not allow even medicinal usage. In other words, although the US is influencing other countries to become more accepting of medical marijuana, a large percentage of its population still cannot legally consume the plant.

However, Thailand would be the first country in Asia to legalize cannabis for any reason, even medical. By passing a law allowing for the consumption of medical marijuana, Thailand will have access to trade in a market that the US-based economic policy nonprofit Grand View Research estimates could be worth a staggering USD $55.8 billion by 2025.

Thai policies could affect other nations in the region, too. Cannabis grows particularly well in a region called the Golden Triangle, where the borders of Thailand, Laos and Myanmar converge. These countries are also cash-strapped and may be eager for any new revenue stream. This region has for years been a mecca for Western tourists who wish to partake in some of the world’s best cannabis, or ganja as it’s commonly known there. Legalization would mean that the government coffers and law-abiding citizens alike will get their rightful piece of the pie. In addition, those countries may save money on drug enforcement, which has become a continuous strain to their economies.

“Countries like Laos and Cambodia can open themselves to international cannabis export quickly, and as mostly agrarian countries, they can produce tremendous yield at very low cost,” says Sean McCabe, director of business development at Electrum Partners, an international cannabis consultancy firm based in Nevada. “Cannabis legalization represents an enticing new revenue stream for these developing nations.”

The economic benefits of getting involved in the cannabis trade may be enough to influence other Southeast Asian nations to legalize medical cannabis. However, many wealthier Asian nations are not as quick to embrace the trade opportunities and tax dollars that medical marijuana potentially offers. In fact, several nations are moving in exactly the opposite direction in an apparent backlash against growing acceptance of cannabis consumption.

The Other End Of The Pendulum Swing: Singapore Clamps Down On Cannabis

While some countries in Asia contemplate newly lax drug laws, others are tightening regulations in previously unforeseen ways. Singapore, known for its strict laws and even stricter law enforcement, wants to make it illegal for citizens to sample legalized cannabis — even in countries where the plant is legal.

Citizens and permanent residents of Singapore who visit the United States, Canada or other countries with legalized marijuana are increasingly being drug tested when they return to their home nation. If Singaporeans test positive for marijuana or any other controlled substance, they can be prosecuted for drug use, similarly to if they were caught using illegal substances in their own country. According to a press release from Singapore’s Central Narcotics Bureau, the government intends to continue and may increase this testing in the near future:

Under the MDA [Misuse of Drugs Act], any Singapore Citizen or Permanent Resident found to have abused controlled drugs overseas will be treated as if he/she had abused drugs in Singapore. CNB conducts enforcement checks at Singapore’s checkpoints and will take action against those found to have consumed drugs overseas.

This move is surprising, even for a country notorious for its draconian drug laws. Even more surprisingly, customs agents at the border may begin testing people entering Singapore as tourists from other countries. Canada’s travel safety and watchdog group Travel Canada has warned that customs officials in Singapore will also be allowed to request drug tests on Canadians entering the Southeast Asian nation. People who test positive for cannabis could be arrested and charged, as testing positive for controlled substances is a crime in Singapore. This holds true, even if the cannabis consumer ingested the plant or plant-derived product in a country where it is legal.

K. Shanmugam, Singapore’s Minister for Law and Home Affairs, is unapologetic about the new enforcement. “We don’t buy into this nonsense that drugs are good for you. If science says so, then okay. But we have not seen such scientific evidence as yet,” he said, according to Channel News Asia, while speaking at a September event for the Yellow Ribbon Community Project, an advocacy group that aims to help ex-offenders in Singapore reintegrate back into society.

“Our own Institute of Mental Health (IMH) did a study on cannabis and concluded, based on a wide scan of robust research, that cannabis is harmful, especially to the brain and cannabis is addictive,” Shanmugam continued.

And in a speech to the United Nations in 2016, Shanmugam defended Singapore’s tough stance on cannabis and other drugs, stating that, “for us, the choice is clear. We want a drug-free Singapore, not a drug-tolerant Singapore.”

People who test positive for cannabis face up to 10 years in Singapore’s notoriously abusive prison system, a fine of up to $20,000, as well as a caning. Trafficking may result in a death penalty. Similarly, harsh sentences have been imposed on foreigners in the past, so there is no reason to expect leniency just because you are from elsewhere.

Cannabis can be detectable in a person’s system for up to 30 days — and for several months if you’re a daily consumer — making Singapore a bad vacation choice for anyone who indulges in cannabis, even occasionally. This is particularly true for people who use marijuana medicinally and may suffer side effects or a worsening of their symptoms if they are forced to stop consuming cannabis abruptly before a trip to Asia.

The Bottom Line On Medical Marijuana

Although a handful of nations such as Singapore are attempting to crack down on cannabis, this is not the overall global trend. Many areas of the West have loosened their cannabis laws, allowing medicinal or even recreational use. This has been an economic boon due to high taxation of the product and an accompanying drop in legal resources used to enforce cannabis laws.

In addition, many nations are serving as a case-in-point that legalized cannabis, especially for medicinal usage, has few downsides. Southeast Asian nations desperate for new sources of revenue are taking note of this win-win situation and considering an end to strict drug laws. Some countries, such as Singapore, are moving in the opposite direction, but this may change. The likes of the US and Canada are unlikely to tolerate their citizens being thrown into prisons for legally consuming a substance in their own homelands. In addition, the UN is increasingly casting a skeptical eye over harsh penalties for personal or medical marijuana use.

The bottom line is that cannabis consumption is becoming more legal and more accepted throughout much of the world. Whether the rest of Southeast Asia follows Thailand’s example remains to be seen. However, the fact that a notoriously anti-cannabis government is even contemplating medical marijuana is a good sign for cannabis consumers everywhere, especially those who rely on the plant for its therapeutic effects.