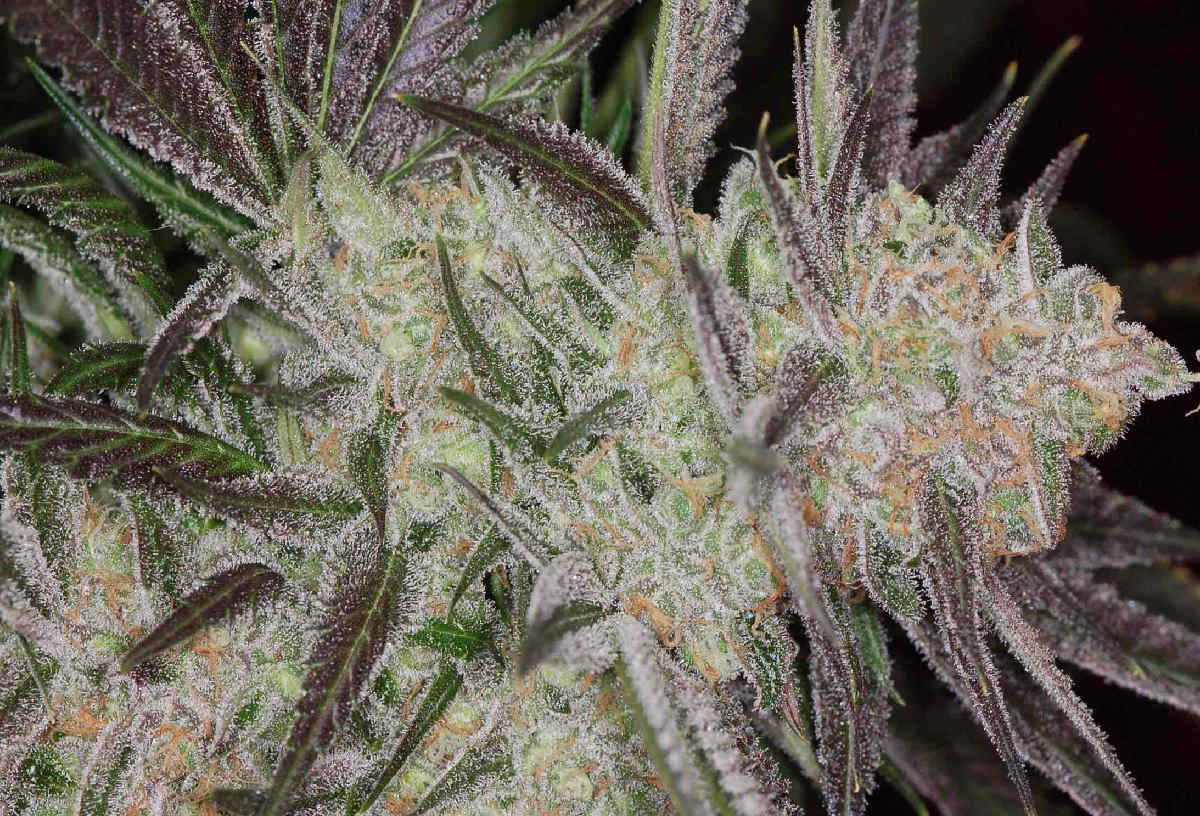 Subcool TGA Marijuana Seeds got into its cannabis time machine to bring back two favorite, retired strains that Weed Nerds have been asking for.

“We’re bringing back Qrazy Train and The Flav,” Subcool says.

This Subcool TGA strain is known for its knockout high, massive crystal, beautiful purpling, and a scintillating menu of tastes including grapes, lavender, kiwi, and pine.

It balances Sativa and Indica genetics 50-50, and is known as a potent pain reliever, muscle relaxer, sedative, and stress-buster.

More news: Subcool told us in early July, 2017 that Subcool TGA is “weeks away from having The Flav back in stock.”

It grows fast, is adaptable indoors and out, and tends to be a tall plant that’s ready to harvest after a 56-day bloom phase.

As you might expect from the name, The Flav is known for its flavors and scents.

Here’s a report from Subcool himself about breeding, growing, and getting high with The Flav:

When I came west, one of the first famous strains I came across in clone form was Romulan.

I had grown Vic High’s Romberry years before and remembered its very unique oily taste.

My friend Jem777 has good friends in Eugene, Oregon who had been growing a particular Romulan cutting for more than a decade in greenhouses.

Every time Jem visited, he’d leave me some Romulan flowers, and the smell was just incredible.

He brought me a cutting one day and I ran her in supersoil and she produced amazingly sweet flowers.

For quite some time it was my favorite smoke because the high is kind and strong, a mix of body and mind, and the superb flavor.

But the old clone became tired and really hard to root, so I thought some hybrid vigor might be just what the doctor ordered.

It was almost a back cross thanks to the parent selection having Romulan on both sides and a little Cindy never hurt the taste.

I put this new hybrid into the testing procedure passing them out to serious growers who have exhibited exceptional skills in the garden.

I could think of no better person than Jem777 to give us feedback on the Romulan progeny. He has a close relationship with the mother plant and is very familiar with her smell, taste and high.

Jem grew out 10 seeds and was rewarded with 6 nice females which he took clones of and numbered. We had a sit down and he brought me a nice sample of each phenotype and we had a session that took up the better part of a day.

Here are my smoking notes direct from those sessions…

I have some really exciting news! I got really high off of The Flav.

It’s rare I get actually blazed on smoking anything, after 35 years of continuous toking.

The only way I get really high is eating several cookies, consuming three tablespoons of tincture or smoking a totally new strain with a unique cannabinoid and terpenoid profile.

I have a feeling my THC receptors are probably maxed out still from the Bicentennial celebrations in 1976, when as a teenager, I did 1776 bong hits.

So Jem777 came over to show me all the phenos and we sat down for a serious session with MzJill and Dioxide so we would have as many opinions on the taste and potency as possible.

We got completely hammered using the Volcano bag vaporizer.

We were all laughing and smiling and Jem77 had to head outside and grab his guitar. We spent the next few hours listening to him play Pink Floyd and Yes, and even Waterfall by Hendrix. The dude shreds—that’s all there is to it. Someone needs to record this cat asap!!

The Flav is really great reefer and the pheno I liked best (#5) is the spitting image of the Romulan mom.

We took turns smelling my 30 days cured Rom and the uncured but dry The Flav and we all thought The Flav had a more complex smell even though it was very similar to its Romulan momma.

About the taste and smell…

It’s smooth and amazing. Even though it’s similar to the Romulan I’ve been vaping all week it has a deeper richer flavor and an instant head rush.

I taste a bouquet of floral oils and spices with a hint of pine on the exhale.

I must say the damn weed is good. In the end, I agreed that his #5 female was my favorite and he surprised me by already having a clone of it for my garden.

I was excited to run her in supersoil and see what I could do with her. I transplanted the little clone into a 1-gallon pot for a few weeks and placed under a 400-watt metal halide.

After three weeks I transplanted them into 7-gallon pots using about 40% supersoil, combined with 60% base soil.

After another three weeks the roots were established and the plant stood about 40 inches off the floor.

I wasn’t sure what the stretch would be so I placed her into the budding chamber which was powered by 2000 watts of HPS lighting in a grow room with C02 injection.

I was happy to see the plant did not stretch much. By day 21 of flowering she just under 5 feet which is just about perfect.

I noticed that she had more vigor and seemed generally happy and healthier than the mother plant.

Taking clones just before I budded the clone I had roots on the duplicate copies in less than nine days.

By week six, Flav #5 as Jem named her started to take on the thick oily dank smell we know as Romulan but seemed to carry more of a sour smell and a thick coating of resin.

I fed her only water and sugars at day 30 and 45 specifically Sweatleaf and Sucanat.

Until week eight, the sugary flowers on the budding plant continued to swell but had greatly slowed down and at day 61 I saw dark-colored resin heads on about 35% of the plant so I took her down.

The dried and cured Flav #5 flowers offered a rainbow menu of tastes and smells. To this day I have a hard time describing this particular strain. There’s such a wide range of terpenes, starting with grapes and anise as well as a thick oily earthy smell.

And as these buds cure longer they take on even more exotic smells and remind me of spice and dates.

The incredible tastes are what made me call this “The Flav.” It coats your tongue with flavor.

The Flav has sometimes been overlooked on the TGA menu because it has a silly name, but make no mistake—this is serious medicine and is great for pain.

She has a calming effect as well as being analgesic. We have many patients who use it for pain.

In 2008, The Flav made the High Times Top Ten strains of the year list.

It remains a front-line strain in our efforts to ease the pain of patients everywhere.

Growers are advised to contact their marijuana seeds seller to ask about availability of these two legendary Subcool TGA strains.

Growers can also check out this article that explains that Subcool is battling a potentially-fatal lung disease.