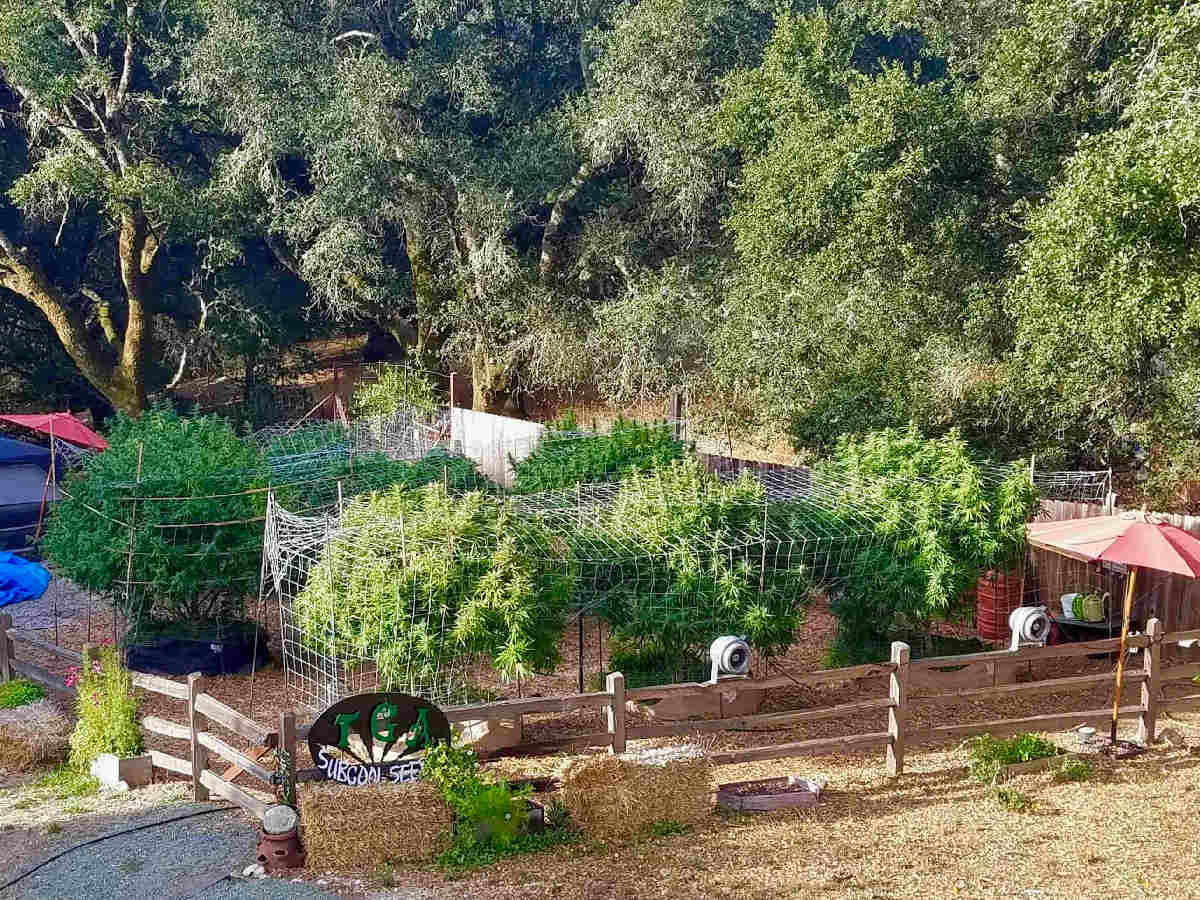 Subcool is fortunate to live near the southern edge of NorCal’s famed Emerald Triangle weed-growing region, which comprises Mendocino, Humboldt and Trinity counties. The region’s climate, soil, remoteness, culture and topography have made it a natural haven for outdoor cannabis growers since the 1960s.

After Proposition 215 legalized medical cannabis growing in California in 1996, and continuing to this day, NorCal has experienced something of a green rush as growers, grow helpers, bud manicurists, land speculators, and processors flock to the area to create a booming marijuana industry that offers an economic and social boost to the region.

Referring to recent reconnaissance ventures to observe ripening 2017 cannabis crops, Subcool reports, “It’s awe inspiring to climb to the top of a hill, look out as far as your eyes can see, and look at legal gardens glistening in the sun — and most of those are strains from TGA. They’re growing more plants here than ever before.”

Assisted by members of The Weed Nerd nation including the Mendo Dope hip-hop collective (comprised of two pot-growing brothers who make songs and videos about growing marijuana outdoors), Badger, Avery Sid, Pez-Bro and a network of growers, ganjapreneurs and activists, Northern California’s cannabis plantations send their delicious fragrance so high into the atmosphere that California anti-marijuana helicopter police report they can smell the dank crops hundreds of feet in the air.

And to be sure, his marijuana plants look like trees! With main stalks as thick as a Terry Crews’ arm, these beauties tower above you as you stroll the gardens.

Indeed, these plants represent an intense labor of love. They’ve been carefully trimmed, trained, netted, caged, fed, coaxed, and supported with bamboo and rebar to grow denser, rounder, taller than anything you’d find in an indoor garden.

It’s not unusual for Subcool TGA outdoor plants to be several feet in diameter and grow in height to 10 feet or more, with dozens of colas that ripen into baseball-bat buds.

He does have his favorites, though. In his personal garden, Subcool has nine humongous Cuvée plants, two Marionberry Kush, and one Conspiracy Kush.

“We chose these strains because they have early finishing times due to Kush influences in the genetics,” Subcool explains. “This is very desirable outdoors here when you can get early rains during late bloom that can wreck a whole season. The Cuvée has two killer phenotypes, with variant Pakistani genetics versus Space Queen genetics. The flowers smell like chocolate and cherries. People say the smell and high are irresistible.”

“One of the most important things to grow these giants is a very expanded root mass,” Subcool informed us. “We’re blessed to have customized Smart Pots with the TGA and Mendo Dope logos on them in [the] 150-gallon and 400-gallon size.

“We filled them with Soil King and BuildASoil blends. We fed the plants with guanos, frass, compost teas and organic nutrients. Watering was done via DripWorks irrigation systems.”

There’s even a couple of wind machines in the form of industrial-size elevated fans that power-aerate outdoor plants. This intensified air movement has multiple benefits.

“It gives the plants fresh air. It moves dust, debris, pests, disease organisms, and mold or fungi off the leaves. It makes the stalks and side branches stronger, so they can hold the big buds. It blows humidity out of there and prevents stagnation, so plants breathe more. When they breathe more, you give them more water and nutrition so they grow faster, sturdier and bigger.”

Check out SubCool’s Episode 291 of his YouTube The Weed Nerd.

But Subcool isn’t growing cannabis to make money only for himself. He’s known in the community for his charitable donations, and so far in 2017 he and his Weed Nerd network have donated thousands of dollars to individuals, children, and families struggling with the likes of autism, heart disease, post-traumatic stress disorder and cancer. He expects to make another $10,000 donation split between three struggling families after he harvests and processes his personal garden.

“Harvest time is intense work and celebration in Northern California,” Subcool said. “It’ll take 3–4 weeks to take down these immense plants and process them. Day after day of cutting, hanging, manicuring, drying.

“We spice the harvest environment by having experts like Mr. Bond 420 in a 36-square-foot Gorilla Grow Tent making premium hashish. We have two giant freezers to store fresh bud. Cannabis extraction expert Frenchy Cannoli will be here with his super-high-velocity water hash machine that easily produces gobs of full-melt bubble hash.”

See Mr. Bond in action below.

The Natural Enemy Of The Grower

The 2017 Northern California outdoor marijuana season has been smooth and tranquil for most growers, but there are always problems. Insects, unprecedented wildfires, micro-droughts, powdery mildew, botrytis — but the biggest problem is undoubtedly an overzealous law enforcement.

Rural police in the cannabis-producing counties continue to spend money and manpower using helicopters, foot soldiers, wilderness incursions and informants to sniff out and eradicate outdoor marijuana gardens. Tens of thousands of plants have been destroyed, and there have even been shootouts between police and growers.

People with an anti-cannabis agenda aren’t the only problems outdoor growers encounter. Some plants have experienced infestations of dreaded russet mites, while others show signs of nutrient deficiencies or root damage. You have to carefully care for and guard your plants every day, Subcool warns, or something bad could happen to them.

Subcool encourages you to watch Weed Nerd episodes 291 and 294 (embedded in this post for your convenience) so you can see some of these huge gardens as they matured during August and September.

As we spoke with Subcool this outdoor season, we noted with concern that his breathing sounded labored. We had previously been informed that he suffers from advanced stage chronic obstructive pulmonary disease, or COPD, a progressive lung disease that makes it difficult to breathe. Subcool’s COPD resulted from an inherited alpha-1 antitrypsin (AAT) deficiency.

AAT protects lungs from inflammation, while deficiencies in this protein often lead to severe respiratory problems that can be fatal.

Subcool said he has no intention of surrendering to COPD.

“The COPD is robbing me of my breath, but I work 16-hour days and love what I do. I do more online grow shows than ever before, including marathon live shows. Cannabis and The Weed Nerd nation inspire me to fight hard to stay active and energized.”

Get Your Comprehensive Hydroponics Nutrients Feeding Recipe The Easy Way
And The Best Supporting Method Goes To… Screen of Green, For Its Starring Role In Marijuana Gardens Everywhere!