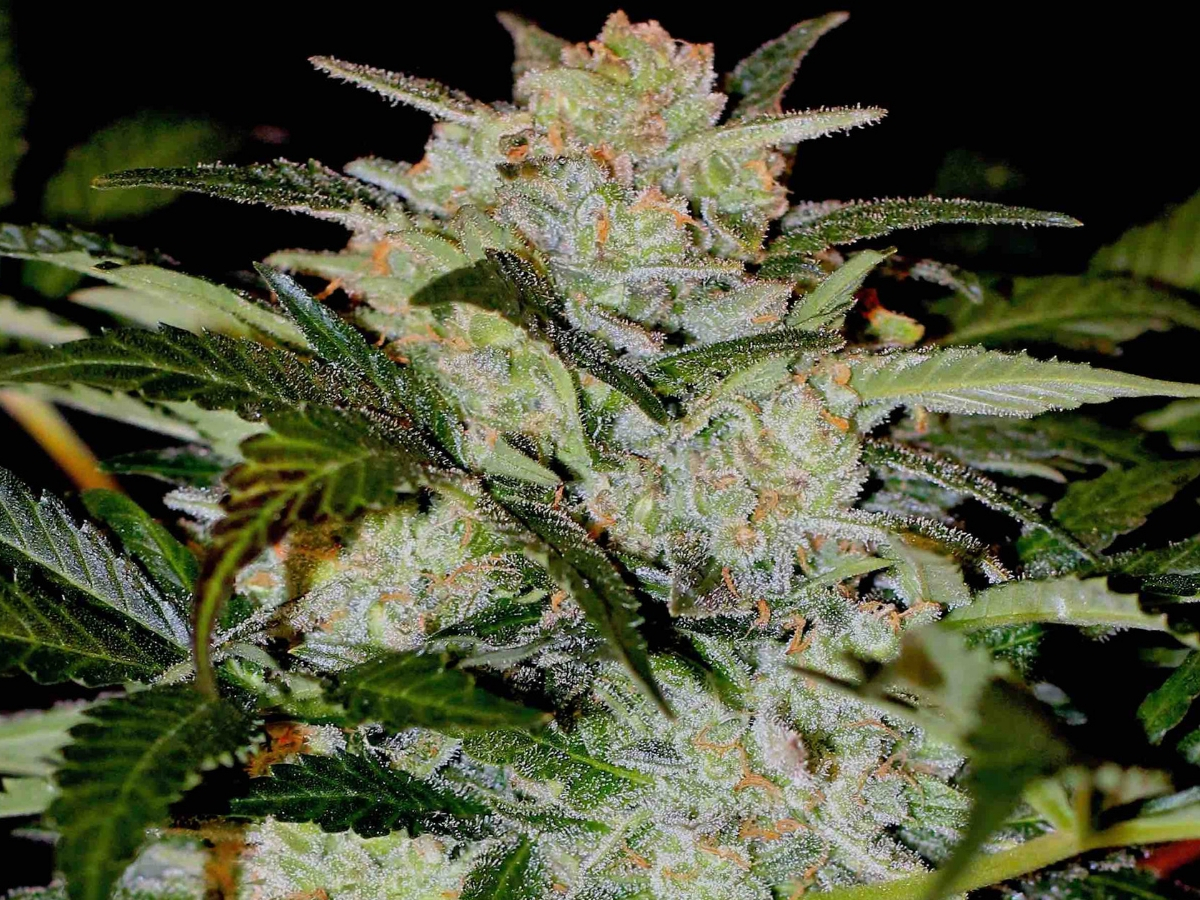 The last time we checked in with North American cannabis seed guru Subcool, he had been forced to flee through the towering flames of California wildfires that burned his most priceless possessions, including his grow operation and valuable cannabis genetics, to the ground. Subcool was lucky enough to escape to Arizona, where he immediately set about revitalizing his seed empire.

A YouTube star and High Times Lifetime Achievement Award winner, once settled in Arizona, Subcool created a partially subterranean grow op in a large swimming pool that had been drained of water. Next, local cannabis business owners began reaching out, seeking Subcool’s cannabis seeds and breeding expertise for use in their various initiatives. One such project involved transforming an abandoned bowling alley in the small town of Globe, about 90 miles west of Phoenix, into a high-tech legal grow op that will soon be home to thousands of cannabis plants.

“The facility will have several large growing areas, a home and kitchen, and a hashish production lab,” Subcool explains of Globe’s repurposed bowling alley. “We’re using lots of glass walls inside so we can better monitor the gardens. We’re using the latest horticultural technology, such as ozone generators and heavy-duty carbonized filters. We have 45 tons of air-conditioning capacity that cost us $200,000. We’re installing 800 grow lights. We had to put in an $80,000 fire hydrant and a special water main and pipe to supply it.

“The power company had to put in a 2,200-amp upgrade and special wiring to deliver enough electricity to the site,” Subcool continues. “Tons of spray-foam insulation has been put in to increase energy efficiency. We have our own wastewater treatment plant to prevent fertilizer runoff. Our grow rooms have 2,000-gallon reservoirs aerially mounted to gravity feed the grow rooms, and floor drains. We’ll use pristine groundwater coming out of a 12-inch pipe that pulls [water] from deep in the ground. During the building’s lengthy renovation and retrofitting, we’ve been the major employer and economic engine in Globe. They realize why the cannabis industry is a ‘green new deal.’”

“The fire cost me many years of breeding, mother plants, pollen plants, rare seeds and clones. I’ve reached out across the world for the dankest genetics and the best breeding collaborators. I secured heirloom clones such as Exodus Cheese, Tiny Bomb and Blood Wreck. I procured pure Cheese strains as well as delicious hybrids I’ve made from Cheese genetics, such as Lemon Stilton. Longtime growers who’ve been growing my strains for years are ecstatic about the new strains we’ve released.”

While the California wildfires forced Subcool to closed out his original TGA Genetics website and scramble for new business partners, there is some good that came from this disaster. Subcool reports that several subscribers to his YouTube channel also made the move to Arizona to help him with growing and breeding, and that the hot, dry climate there helps him handle his genetically inherited emphysema that has at times threatened to end him.

With Subcool’s cannabis breeding operation once again up and running, let’s now take a look at a few of the tasty new strains he’s made since his Northern California exodus.

Subcool explains: “I always wanted to breed a marijuana strain that smells and tastes like bananas. Marijuana has hundreds of terpenoids, so it can smell like everything, from cherries to lemons to diesel fuel, but I’d never smelled a banana terpenoid in cannabis. My dreams came true when I procured an OG cutting to die for — it smelled just like bananas! Our breeding project added in the Jack the Ripper pinene terpenoid and THCV cannabinoid to give us Banana Jack OG. This is a 60-40 sativa and indica hybrid that produces very large harvests.”

Banana Jack OG is a medicinal and recreational strain with a high that focuses your mind, enhances visuals, and rids the body of pain. It’s a little too indica Kush to be used as a wake and bake strain, but is perfect for the midafternoon, evenings and weekends.

Banana Jack OG is so satisfying to smell that you’ll find yourself hanging out in the grow room during bloom phase, sticking your nose into the buds and inhaling deeply. And the phenotypes will likely have little variation. The OG Kush influences tend to keep the plants under five feet tall and a typical Kush shape, whereas topped plants will spread out to be so wide that you’ll likely require extra grow-light capacity.

The Banana Jack OG buds are dense, so you’ll want to have your dehumidifier dialed to 50 percent humidity, starting about four weeks into the 60- to 70-day bloom phase to keep gray mold (a.k.a., botrytis) from rotting your buds. With wonderful bag appeal, these buds can be trimmed off their main stalks and delivered as rock-hard, resin-dipped banana nugs the size of golf balls. Indeed, they’re so resinous that they resemble moon rocks.

Screen of green trellising is an apt grow technique that will offer branch support to buds so heavy that their branches can dip down to touch the floor. In late bloom phase, it’s recommended you reduce your hydroponic base nutrient feeding inputs, yet go heavy on Bud Candy, Nirvana, B-52, Rhino Skin and Overdrive. Whenever I watered, an invisible cloud of banana volatiles scented the grow room.

Frisco Snaps was bred with Subcool’s foundational strain Space Queen, which is a powerhouse combination of the famous Romulan and Cindy 99 strains. The end result is a 50-50 indica and sativa hybrid, with an anxiety-crushing high that has left chronic stoners drooling happily on the couch.

Subcool says this is a finicky strain to grow, and that growers must have at least intermediate cultivation skills and experience to ensure this strain is a success. If you use inferior fertilizers, if you overfeed, overwater or overcrowd your grow room, it’s very easy to ensure crop failure.

To get wonderfully heavy yields of dense buds, top Astro Snaps once 10 days before bloom phase starts and be sure to provide plant cages or a SCROG trellis, because branches will bend — even break — due to heavy buds starting in peak bloom. Fed and lit properly, the strain won’t stretch much during the first weeks of bloom phase. Untopped and flipped into bloom phase after three to four weeks in grow, Astro Snaps can be a very successful sea of green strain.

One of the sweetest uses for Astro Snaps is to process its resin-varnished buds into dry sift or bubble hash. Using non-solvent hashish production preserves the scintillating terpenoids that make natural cannabis concentrates made from Astro Snaps taste like candy. You’ll need 56 to 64 days in bloom phase before you can harvest these buds.

“I’ve always loved the California Orange strain, which is very euphoric and smells exactly like oranges,” Subcool says. “The breeding program for Sweet Tea crossed California Orange with Alcatraz OG and Space Queen. Alcatraz OG is a sativa-heavy cross of Hells OG and Frisco OG, and very highly sought after. This strain is packed with genetic influences that make it a winner.

“Imagine biting into a ripe blood orange and tasting the orange taste, along with a hint of cherries and melons,” Subcool describes this strain. “The oily mandarin flavor coats your tongue as your mind is lifted upward and sadness melts away. This strain always lifts your spirits, and can be used during the daytime so you have a positive mental attitude.”

Sweet Tea plants have a large root mass and grow rather tall, so if cultivating this strain indoors, at minimum use a 10-gallon container. This isn’t a strain for cannabis grow tents, closets or other small spaces. Outdoors, give Sweet Tea as much root space as you can and top it multiple times in late spring and early summer. Next, trellis and cage it, because this strain can grow up to 15 feet tall and six to eight feet in diameter.

Even though the strain is sativa dominant, it only needs 57 to 61 days in bloom phase. It responds well to nitrogen-packed bloom booster Big Bud Organic, and is best grown with intense light, whether you utilize the power of the sun or the power of indoor grow lights.

If you’ve ever before grown Subcool strains, you likely grew Cuvee and Locomotion. Sadly, those delectable, powerful strains were lost in the 2017 wildfire that destroyed Subcool’s seed company and grow ranch, but fortunately, Queen Anne’s Revenge is reminiscent of both.

This strain comes from a breeding program involving Blood Wreck and Space Queen. Blood Wreck is one of Subcool’s foundational cannabis seed strains and is utilized in the breeding of other Subcool favorites, such as Chernobyl and Timewreck. Blood Wreck is a rare Northern California strain based on Trainwreck, another famous Cali strain.

After you take a couple of inhalations of this flavorful weed, you will no longer wonder why the word “wreck” features so prominently in the lineage of Queen Anne’s Revenge. Tasting of cherries, limes and sandalwood, with a crushingly intense, sedative-hypnotic high, Queen Anne’s Revenge will render you incapable of remembering what it was you were just doing.

This is an easy strain to grow using the pH Perfect hydroponics base nutrients program, along with Nirvana to stimulate resin production, taste and aroma. Without topping the plants, they will grow out to be bushy, wide and sturdy, so there will be no need to build a support structure or worry that the branches will break, even though big, cake-ball-like resinous buds will be crammed up and down the branches.

To deter gray mold from forming in these dank beauties, run your dehumidifier nonstop to maintain the grow room at 47 percent humidity. Bloom-phase stretch can nearly double plant height and present two distinct phenotypes — one that can take 58 days to be ready for harvest, and the other that can take 64 to 66 days before it’s ready, while being slightly more potent.

As a grower who appreciates 100-percent germination rates and seeds that grow out to be exactly as the strain description dictates, it’s a relief Subcool survived the traumatic natural disasters of the past two years to create new cannabis strains that combine unique, scrumptious combinations of terpenoids with high yields of gooey, potent buds.