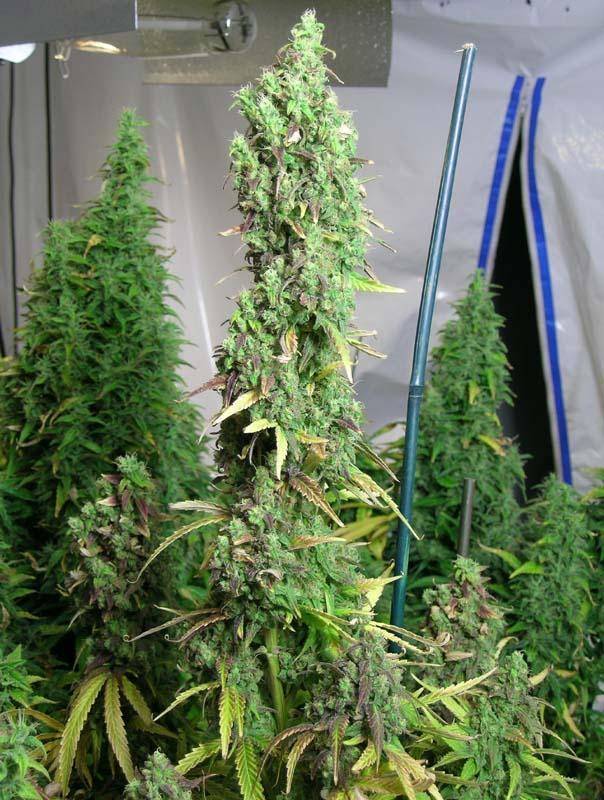 By Subcool | Published: September 12, 2011
This is what I call a blast from the past report on a strain called Astroboy we created around nine years ago. The male we called “Taco” (for his Ortega heritage) was lost, but we remember his offspring very fondly.

Astroboy was a great combination of similar genetics. Combining Apollo-13 with Ortega x Cindy99, we ended up with a very stable Cherry Apollo. The fruity taste was combined with better than average yields for a Grimm-based hybrid. Maturing rapidly and packing a great combo Sativa/ Indica buzz, she came on strong at first then leveled out into nice visuals and happy thoughts.

This is a really great write up I received from a grower named Fried. A total classic smoke report:

Harvest Window: 50 days
Sativa/ Indica: 80/20
I too mostly grew up on the heavy strains, a sativa was always a treat. I have had audible/visuals trips on weed. I have “shrunk” and had a couple surreal experiences, which brings me to this Astroboy.

The few tiny bottom/bottom buds dried on the monitor did absolutely nothing for me that I noticed. So several days later I took the bud from the end of the branch that I had already molested, threw it on a platter that mostly stays on my coffee table under a ceiling fan to dry out the wetass weed we smoke most of the time and let dry for a couple of days.

When I couldn’t stand it anymore, I cut it up still pretty wet bud, cleaned out my pipe and fired up a bowl while *** slept.

Haha………… Now REALLY. What happened next hasn’t happened since I was a teen. Heart rate went up, and my mind seemed like it was jacked into a mainframe. The thoughts totally detached and unrelated rushed through my mind at a breakneck speed. This shit ain’t quite done with me yet though as it settled down. Well, it seemed like it settled down, but as I was about to find out it was only one “wave” of many.

I felt as if I was floating, my body very light and seemingly barely attached to my mind. I had a “third eye” that seemed to view a slide show, in my head that was totally unrelated to the mad rush of thoughts that had flooded back over me.

So there I sat looking in looking out not really seeing anything thinking “at least I’m not paranoid,” while watching cartoons through my third eye.

I go up to my grow room to look at my plants. Almost 2 hrs. had passed since I smoked. I said fuck this shit & loaded another bowl and fired it up. Woke ***, and stared into space while she smoked a cigarette.

When I went to bed my body kept “sliding” sideways across the bed while it maintained the surreal unattached feeling. Laying there in the dark I watched what I mostly remember as Steamboat Mickey cartoons along with flashes of light, through my third eye, finally going to sleep about 4:30 3 hrs. or so after I started my session.

I told you I’d tell you how it smoked…
It’s a keeper for sure in my garden. I’m letting it go a while longer as the trics are still most all clear, and it probably needs to settle down a little bit, I’m not as young as I used to be.