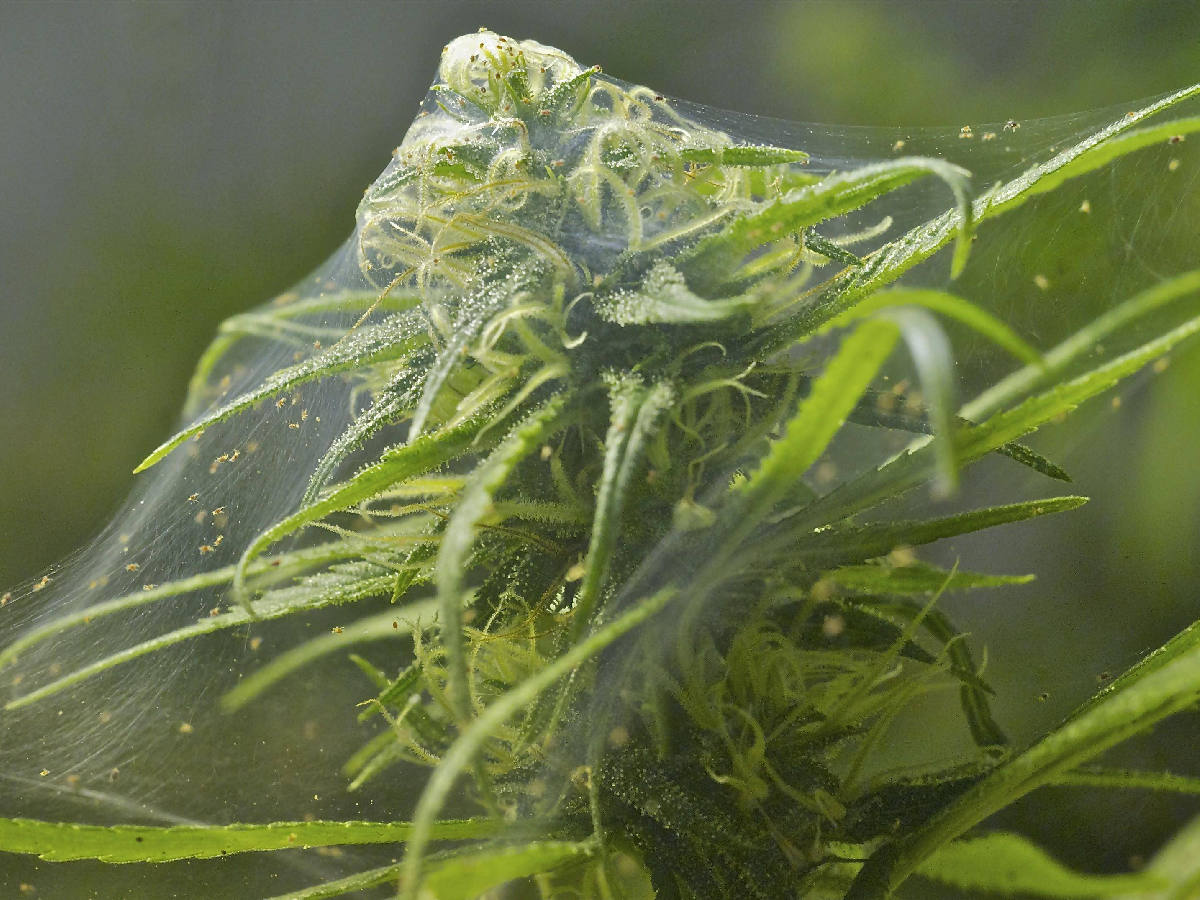 Spider mites and broad mites have risen up to suck the life out of marijuana plants.

The little bastards punch suckholes in your leaves, spread viruses and other pathogens, build webs on your buds, and can ruin your marijuana garden in only a couple of days.

If mites take over your garden, expect your plants to stall, get sick, suffer, and look terrible.

If you’re in bloom phase and mites appear, better stop them fast, or your cannabis plants will produce lousy, undersized buds that look like dirtweed marijuana and lack THC.

What I should have done first is grow my marijuana in a Controlled Environment Agriculture (CEA) sealed hydroponics grow room that locks mites out using air filtration and other strategies.

CEA includes keeping your grow room temperatures at 74F or below, and humidity between 50-60%. Spider mites like hot grow rooms with low humidity, so give them an environment they don’t like.

I should dip all incoming clones in a natural miticide such as Azamax, and made sure not to bring in mites from grow rooms that are infested.

Mites hitchhike easily, and appear as live organisms of varying ages, as well as eggs that can survive long after the parents are dead.

This means you kill one generation of spider mites…but those mites laid eggs before they died, and those eggs later hatch so you have to spray for mites over and over again.

It’s a constant battle unless you use the interventions I suggest below:

Look at the undersides of your marijuana leaves every day, using a strong magnifying glass.

I especially recommend Eschenbach magnifying devices of 10X or higher.

The ones that have built in lighting are the most useful.

You especially want to look for marijuana leaves that have tiny yellow-orange spots on the leaf’s topside.

These are signs of mites underneath.

As soon as you see any mites at all anywhere in your grow room, hit them hard.

I have a three-part program:

First I bomb the grow room with a pyrethrum fogger…

Turn off all your vents, lights and air conditioning, trigger the fogger, seal the room door and get out. Let the fog sit in the room for at least five hours, if not for an entire lights-out cycle.

Second, feed your plants Azamax, and spray them with Azamax.

This systemic miticide enters your plants via roots and leaves.

It kills mites when they first start sucking on your plants.

It’s not a contact “knockout” killer. That’s what the pyrethrum fogger is for.

Third, if some of your marijuana plants are especially infected with mites, move the worst plants out of your main hydroponics room after your pyrethrum fogger phase is over.

You may have to give them extra doses of fog and/or extra strong doses of Azamax, to kill all the mites.

Another anti-mite strategy includes feeding your motherplants and other marijuana plants with a preventive dose of Azamax.

Growers who have used this method indicate that it has to be done as a series of 2-3 treatments so you kill all adults, then 5-7 days later you do it again to kill babies that have hatched from eggs, and then perhaps 5-7 days after that for a final killing blow.

Read the instructions for Azamax, which are quite helpfully extensive.

Some people use predator mites, and they do work, but the problem is they die on your buds after they’ve eaten the spider mites and broad mites, so you have buds contaminated with mite bodies.

For example, I grew out a room with 25 Bubbleberry plants and five plants that were a cross between Bubbleberry and Sage-Sour Diesel.

It contains potassium silicate that makes your plants harder for spider mites to chomp on.

And never use Avid or any other chemical poison on your plants.

The interventions I use are said to be “safe,” “natural” and “organic.”

Try to detect and completely defeat spider mites before your plants are more than three weeks into bloom phase, even if you are using safe, organic, natural interventions.

Because after mid-bloom phase, anything that gets onto or into your cannabis buds is likely to stay there and affect your marijuana quality, taste and aroma.

Keep pets out of your grow room, and remember it’s way easy to bring mites into your room on your clothing, body and tools.

If you have a buddy who says he has spider mites in his hydroponics grow room, avoid going to his house.

You’re almost sure to get mites on you, and they will transfer into your grow room.

Keep mites out of your hydroponics grow room and off your marijuana plants…or use the strategies I suggested earlier in this article if mites have invaded.

You can defeat mites, but only if you detect them early enough and take decisive steps to kill them before they kill your marijuana heavy harvest dreams.

If you have buds with lots of resin glands but they also have mites and mite webbing, wash them in lukewarm reverse osmosis after you harvest them, and make solvent concentrate from them.

That way, the mite bodies and mite poop are purged so you’ll have salvaged at least something from your mite-infested crops.

If you have mites during a crop cycle, get rid of those plants as soon as bloom phase is finished.

Get rid of the root zone media, the dirt, whatever.

Thoroughly clean grow room and disinfect everything that came into contact with the mites, using a non-sticky miticide.

Consider cleaning any ducting, venting, and fans that service that room, using a non-sticky miticide.

But now you’re armed with knowledge of how to beat them!