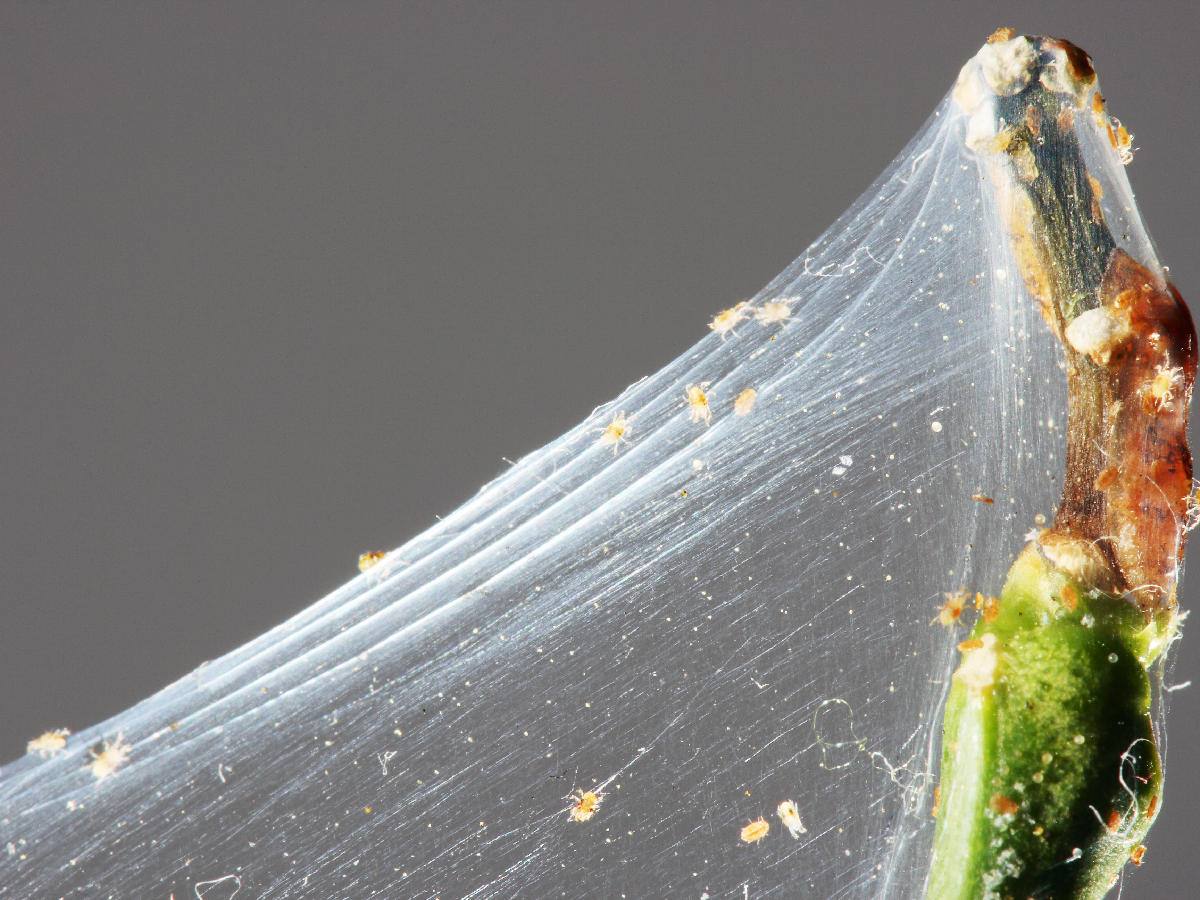 Mites such as these spider mites are a scourge on the marijuana-growing community.
By Richard Gilsoner | Published: October 10, 2017

They ruin marijuana crops, according to the Environmental Protection Agency they’re partially responsible for bee extinctions, they mutate fast to build resistance to poisons, there are nearly 50,000 species, and — here’s the biggest ick of them all — some even colonize human skin.

When it comes to marijuana gardens, the mites that most invade our community are spider mites, broad mites and two-spotted mites.

Unfortunately, a growing number of us are now seeing our cannabis plants infested by a relatively new mite curse: the hemp russet mite.

These little assassins tend to hang out in hidden nooks where new leaves are forming, before migrating to buds to suck the resin.

They’re much smaller than spider mites. So tiny that they can travel on the wind.

And they don’t spin webs on leaves and buds à la spider mites — a telltale albeit damaging sign that would make them easier to detect.

While spider mites are visible with a 10X magnifier, if you want to see russet mites, you’ll need at least a 30X magnifier — but the stronger, the better.

In general, these mites appear as translucent white or slightly yellow.

Check out the below YouTube video from The Dude Grows on how to spot a russet mite.

How Bad Can Mites Be For Your Plant?

Mites harm marijuana plants by infesting stems and the underside of leaves, piercing plant tissue and sucking the life out of your plants while also creating damage sites that are primed for further infection. Some mite species gather, feed, and reproduce in your plants’ dense bud tips, where they ruin the quality of your buds.

By the time mites are visible in large numbers, your crop has already been damaged, and not just aesthetically. The mites have likely sucked so much life out of your crop that its stressed out and growing slower than it should, having had to channel nutrients and carbohydrates for repair and survival instead of for growth, buds and resins.

Webspinner mites compound that damage because their webs block air circulation, light absorption and leaf transpiration. The webs trap humidity and contaminants around the leaf surface, and encourage mold and mildew, rendering buds unfit for sale.

What Should You Do? Inspect Your Marijuana Plants Every. Single. Day.

A small infestation of undetected mites can spread like wildfire to quickly take over your entire crop. This is because adult female mites can lay dozens of eggs at a time, and those eggs can hatch within days to become adult mites in as little as eight days, before also laying dozens more eggs.

So what are the telltale signs of mite damage that you should be keeping an eye out for?

Also be mindful of mite damage that’s more difficult to observe because it’s incremental. This includes:

Keeping a journal or logbook might help you track this accumulative damage.

If a grower fails to realize that mites are the root cause, they might attack phantom problems, thus creating even more issues for plants already suffering an infestation of mites.

Mites prefer temperature conditions that are warmer than the recommended ideal temperature range for marijuana plants. They also prefer dry conditions, with humidity below 53 percent.

By far the best thing you can do to fight mites is prevent them from getting on your indoor plants in the first place by ensuring you address these issues. Unfortunately, if you’re growing outdoor marijuana plants, this is almost impossible.

Stay tuned for our next articles on marijuana mites — we’ll explain preventive tactics to help you beat the plague.

Hip-Hop And Herb: Meet Mendo Dope, Cannabis Growers And Beat Throwers
The Whole SCROG: Getting To The Root Of Cannabis-Growing Maximum Yields With Screen Of Green