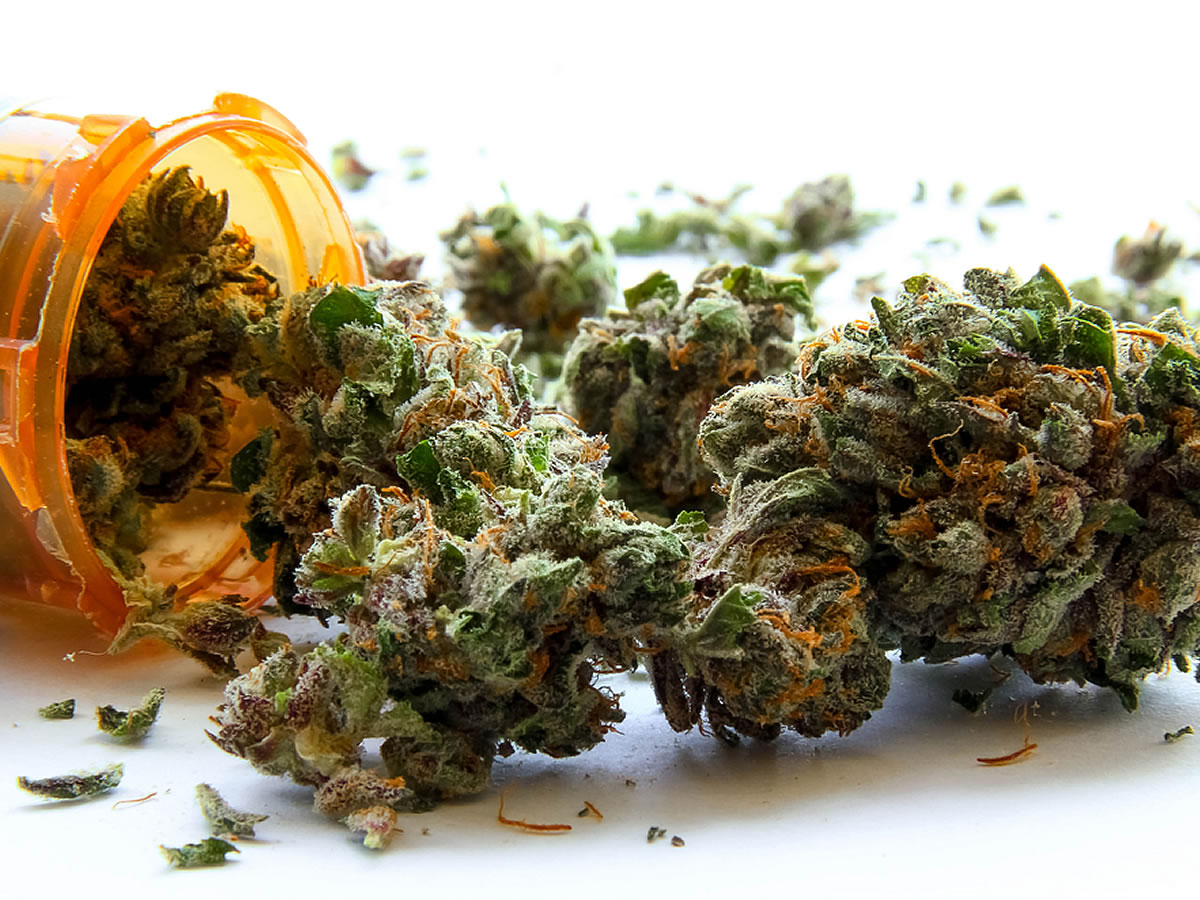 It’s no joke for me or the tens of thousands of people who’ve found marijuana to be their best medicine.

You can read my series of articles explaining how cannabis and therapy helped me overcome PTSD.

Today’s article contains testimonials we’ve received from people who use marijuana to save and improve their lives.

The testimonials are presented in an alternating regular and italics format to distinguish between patients:

“Due to a back surgery that didn’t work I was hooked on Vicodin and sometimes morphine.

So now I was in pain from the surgery and I was an addict.

The addiction doctors tried naloxone, counseling, locking me in a hospital ward.

What helped me quit opioids was cannabis.

It’s a plain as day that this is the best way to quit.”

“I was using pain medicine but it didn’t stop the pain and it made me feel sick.

I do not want pharmaceutical pills.

As human beings we all deserve to live a pain-free life. The cannabis medicine works for me on so many levels.”

After trying multiple pharmaceuticals to help with my condition, my doctor and I settled on Percocet for relief.

Although it did help with the phantom pain it changed my personality drastically. It almost cost me my marriage and my family.

One afternoon I was talking to a fellow amputee about my phantom pain. He asked me how badly did I want to stop taking narcotics and find something that really worked.

You can imagine my answer.

He took me to his car, lit a joint and offered it to me. All my life I had been told that ANY drug is bad. He reassured that I would NOT become a reefer madness homicidal maniac.

I shared that cannabis cigarette with him.

He approached me about a half an hour later and asked how my phantom pain was.

I replied, “What phantom pain?”

That was nearly fifteen years ago.

Once in a while I still get a severe attack but they are few and far between.

About six months ago I was arrested for possession of marijuana. The judge in my case, in open court, expressed sympathy for me but said his hands were tied by the laws of the state. I might end up in prison!”

“I had knee surgery that made my pain worse instead of better.

Then the docs hooked me on prescription opiates and said I needed more surgeries. I was scared and suicidal.

I tried medical marijuana. It immediately got rid of the pain and I kicked the opiates.

I grow my own hydroponics marijuana medicine at home using Advanced Nutrients.

I choose the marijuana strains that do what I need, and it’s so much better than the drugs the doctors were giving me.

Marijuana has helped me be fully employed and almost totally pain-free.

But I can go to jail for my medicine, especially for growing it myself.

My state needs to modernize its laws to allow me to grow the healing cannabis plant.”

“Three years ago I found out my COPD and emphysema had reached the moderate stage.

My father died from COPD and emphysema so I knew of the suffering, and the horrible side effects of the pharmaceuticals given for these diseases.

In my research, I discovered the great benefits that medical cannabis has on COPD and emphysema, as long as I don’t smoke it.

The pharmaceutical medicines given to me as a bronchodilator make my heart race, make me nervous, make me not be able to sleep, make me not feel like eating and just make me sick.

But cannabis is a great bronchodilator, anti-inflammatory, and expectorant—and helps me sleep and eat.

It was my lifesaver, until police destroyed my garden and now are trying to call me a criminal.”

“I have a patient who has had multiple sclerosis (MS) for 32 years and had been able to remain active and ambulatory.

In recent years the pain and spasticity of MS has become horrific and is not relieved by conventional medications.

I referred the patient to a cannabis physician in California who prescribed medical marijuana. The patient reported complete pain relief without fatigue and reduction in spasticity.

The other benefit has been the bowel dysfunction that renders MS patients constipated. Certain hybrid strains of cannabis alleviate this incapacitating problem.

Many of my patients with HIV, diabetic neuropathy, chronic Lyme, MS, and cancer have embraced cannabis to improve their quality of life.

“My mother had chemo for three years before passing. The chemo made her ill and weak.

This was in the early 1990’s before the medicinal marijuana movement.

I offered to get marijuana for my mother to try because there was already literature that indicated marijuana was useful for treating pain and nausea associated with cancers and chemo.

She refused solely because it was illegal. Mom went from a robust 120 pounds to 75 pounds when she finally passed.

The laws against marijuana caused my mom to die in misery.”

“I grew up in California and was told I had borderline glaucoma. I smoked medical marijuana for about 7 years and kept my glaucoma under control.

I moved to Florida about 8 months ago and had to stop smoking or my pain management doctor said he would drop me from their pain program if I continued to test positive.

Over the past 7 months my glaucoma has gotten so bad I had to have surgery in both eyes and have lost vision and also have migraine headaches.

I started smoking again (illegally) and have been maintaining my vision and have controlled my migraine headaches by smoking marijuana.”

“I’m an Army Veteran who suffers from combat PTSD and a lower back condition after two combat tours in Afghanistan and Iraq. I was depressed, afraid and isolated all the time from family and friends.

The VA prescribed me narcotic pain medication and Xanax to treat my condition, and it honestly only caused more problems for me and my immediate family.

During a trip to California, a friend of mine there offered me some of his medical marijuana to relieve my symptoms and pain.

Within an hour of ingesting the medication I wanted to go out and enjoy myself. My anxiety went away and I had a smile on my face.

My mother, who has always been against marijuana, noticed the change in my personality immediately.

After spending the week in California taking medical marijuana, my mother no longer opposed it because she felt she had her son back.

I now have to break the law to  medicate and function on a daily basis.

I have to risk losing my job and some medical benefits through the VA because I have marijuana in my system.

It’s a shame that something as simple and gentle as marijuana is illegal and narcotic pharmaceuticals are considered the best option.

I have been told by VA doctors and policemen that if I want to ingest medical marijuana I need to move to a state that has legalized it.

This is my home and I have a family here. I just want to be a functional member of society and provide the life for my family they deserve.

I just want to be the person I was before the war…and medical marijuana is the only thing so far that has helped me with that.”

“My brother died two years ago from throat cancer. He went through many sessions of radiation and chemo.

My family is all in for medical marijuana.”

“I am a retired nurse, and my grandfather had lung cancer—radiation burned his lungs beyond repair. He was taking pain medication that caused him horrible constipation, and then another pill for nausea.

When pot was put in his tobacco that ALL stopped. He had much less suffering.”

“As a prior law enforcement I understand the pointless burden that the enforcement of marijuana laws have made on society.

And as the son of a mother who is winning the battle against breast cancer, I understand the potential benefits of cannabis as treatment.

Also, my father just died from a series of medical conditions that, had the medical marijuana option been available, could have enhanced the quality, or even prolonged his life due to the reduced need for consuming pharmaceutical opioids and countless toxic pills.”

“I suffer from Crohn’s Disease and have less than 5 feet of intestines left due to multiple surgeries. I’m currently supplementing oral nutrition with IV nutrition in order to survive.

This is because I have a very poor appetite and eating is painful for me. I don’t absorb all the nutrients I need from my food because it goes straight through those 5 feet of intestines I have left.

Marijuana could help relieve my constant nausea; could help with pain and inflammation and could help increase appetite.

My medications could be reduced or possibly eliminated if marijuana were a legal option.”

“In September 2011, I suffered a traumatic brain injury and had a stroke. Due to the trauma, I have been relying on opiates to relieve headaches and help me sleep.

“I have suffered from seizures for nine years. I have been on several different combinations of pills to try to stop them. Nothing has worked.

My main seizure trigger is stress. Doctors told me to take a pill when I’m feeling stressed but it takes 30 minutes to an hour for it to take effect, but I have had seizures while waiting.

I found that if I just take a couple of hits from marijuana I calm down and no seizure occurs.

I would rather see marijuana be legal then be a guinea pig for the pill pushers.”

“My daughter is now 37 years old and has not had a seizure since becoming a patient of a medical marijuana dispensary.”

“I suffer from debilitating arthritis, predominantly in my knee and ankle joints.

This has been an ongoing issue since my early twenties. Over time this condition has worsened to the point where now, in my fifties, the medical answer is daily doses of OXYCODONE.

Having no desire to become addicted to such a drug, I researched and experimented with marijuana.

I have found that a small amount of marijuana before bedtime stops the aches and spasms and allows me to get sleep without the opiates.

I wish I had thought of marijuana years ago; I could have avoided a considerable amount of chronic pain and discomfort. It’s time for marijuana to be totally legalized everywhere!”