Detecting the gender of cannabis is an important part of marijuana growing.

Cultivating photoperiod marijuana from non-feminized seeds, you must detect plant gender as soon as possible. Most of us only want to grow female plants, and don’t want males spreading their pollen around. Until they’re detected and consequently removed from your grow op, male plants will take up precious space, water and nutrients. Ultimately, the earliest possible detection is the best for you and your grow op.

Some photoperiod plants grown from seed display either male or female flowers before bloom phase starts. Depending on strain and phenotype, I’ve seen it happen starting in weeks 3–4 of grow phase. Note that autoflowering marijuana plants are feminized, and start flowering on their own within 2–3 weeks of germination. But we’re not discussing autoflowering cannabis here.

It’s not that plants will commence a full flowering cycle before grow lights have been shifted to 12–12. Rather, what happens is that tiny primordial floral structures begin to develop. Ideally, the alert grower should detect those structures as soon as they appear, and as a consequence be able to free up grow-room space and resources by removing male cannabis plants altogether.

The same is true for plants that only show gender after 12–12 lighting has started, except that the tiny primordial structures will grow into full-fledged female buds or male flowers.

In both cases, the grower benefits from determining plant sex as soon as possible. Starting at week two in grow phase, I use a powerful magnifier to examine my plants, which is worn on the head like eyeglasses. This Begeer Head Magnifying Glass boasts multiple powerful magnification lenses and an onboard light, and is much more useful and convenient than a handheld loupe or magnifier.

How To Tell If Your Cannabis Plant Is Male

With your magnifiers in place, look at the place on the plant where leaf set junctions join to the main stalk. This is the most common place where primordial floral structures show up, particularly at the top of junctions.

It’s best to gently move leaves and stems out of the way to get a totally unobstructed view of the junction from slightly above. Male primordial floral structures tend to hide in a low spot in the junction, and are difficult to see. The elevated angle makes it more likely you’ll spot them.

Male primordial floral structures look like round, ruffled balls, approximately the size of a BB pellet. Sometimes, they’re on a tiny stalk, or tiny stalks will emanate from them. They’re usually the same color as the rest of the plant, which is why they often blend in. Other times, they resemble primordial leaf-forming structures, so it’s prudent to use caution and watch the structures for a couple of days before you decide for sure it’s a male flower.

Here’s a photo of two male flowers that are a little larger and easier to see than most primordial male flowers: 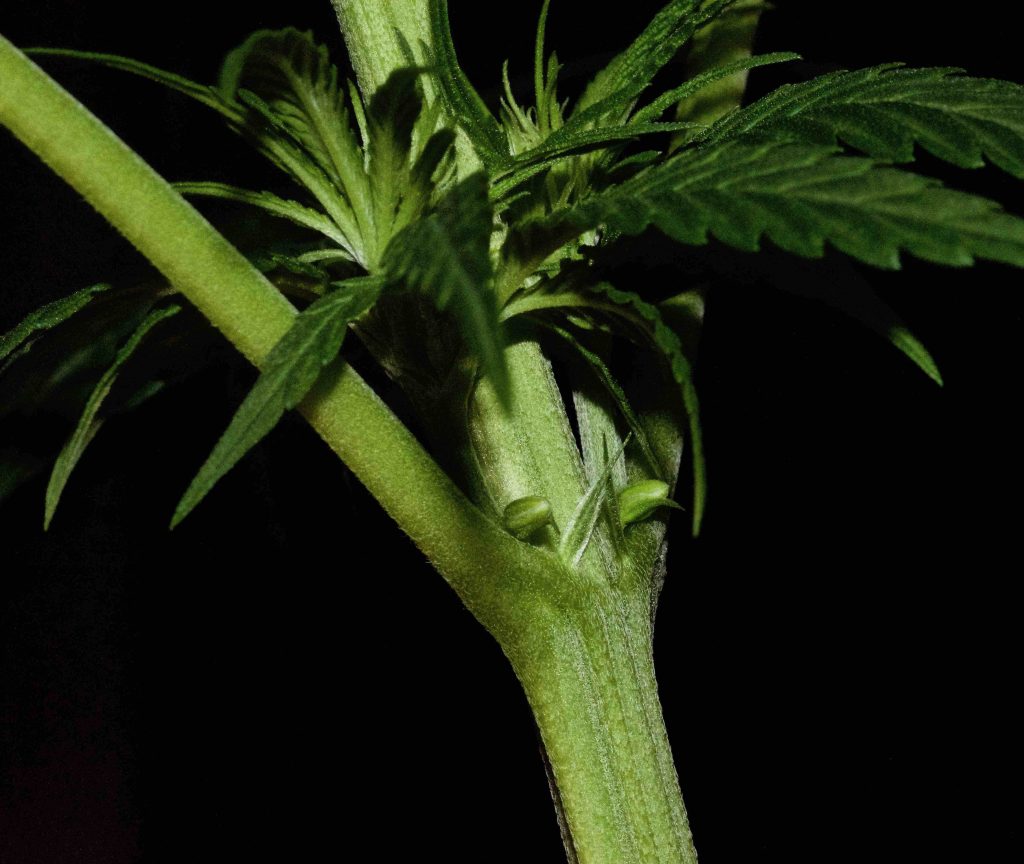 How To Tell If Your Cannabis Plant Is Female

Primordial female floral structures are much easier to recognize. They don’t look like structures that could produce new leaves, like male early flowers sometimes do.

Female primordials appear at the leaf junctions. Their conical structure is about an eighth of an inch high, and they’ll have a tiny white hair or two emerging from the top of the structure. It’s a happy moment when you see a white hair appear on a young plant, because it means it’s a female plant you can keep to harvesting buds from.

Choices To Make Based On Your Plant’s Gender

Healthy cannabis shows primordial flowers in the last couple of weeks of grow phase, or within 1–2 weeks of the start of bloom phase.

After I’ve made positive gender identification, there are a number of things I then need to do. If the plant is a male and I’m not using it for breeding, I remove it from the garden and terminate it.

If it’s a female and I’m growing in Solo cup containers, I transplant it into a larger container. I usually top and/or train the plant to shape its profile and create more budding sites, and to promote a structure that holds heavier buds.

If you start bloom phase and your plants haven’t shown primordial flowers by the end of two weeks, the most likely explanation for this unwelcome delay is that light is present in your grow room during the dark cycle.

That stray light is likely coming from poorly blocked windows, cracks around a vent, cracks around or under the grow-room door frame, or even from a fan, timer, power strip, or a device that has a ready light that remains operating during dark cycle.

Other explanations for delayed production of primordial flower structures include genetic defects, plant health problems coming from nutrient issues and/or grow-room environment, or the lights-on cycle is too long for the specific phenotypes being grown.

In some cases, such as when I’m growing phenotypes heavily influenced by equatorial sativa genetics, I have to reduce my lights-on cycle to less than 12 hours to get plants to flower. I may increase the lights-on cycle to 12 hours a few weeks into bloom after I’ve coaxed recalcitrant sativa cannabis plants to embrace flowering. However, going to as few as 10.5 hours of light per 24-hour period in the first couple weeks of bloom phase has sometimes been necessary to get sativa-dominant phenotypes to flower.

No matter what genetics I’m growing, I induce earlier flowering by using the Bud Ignitor supplement, which is known to accelerate the onset of flowering and to increase the number of budding sites.

It takes several seasons of monitoring marijuana plants using magnifying devices before you fully master the art of detecting the earliest sign of male and female floral structures. Unless you’re preserving male plants for breeding, you should pull and destroy them as soon as they’re detected — freeing up space, light penetration and resources.

As soon as you detect female plants, top them and transplant them into larger pots, giving them expanded space for root growth and for creating increased branching that expands bud production. The bottom line is this: When you sex cannabis as early as possible, you can get down to the business of growing your biggest, most potent yield yet.

Jack Herer: Not Just A Marijuana Strain, But A Marijuana Legend
Dutch Coffee Shop Owners “Impressed And Depressed” After Visit To Cannabis Producers In Canada