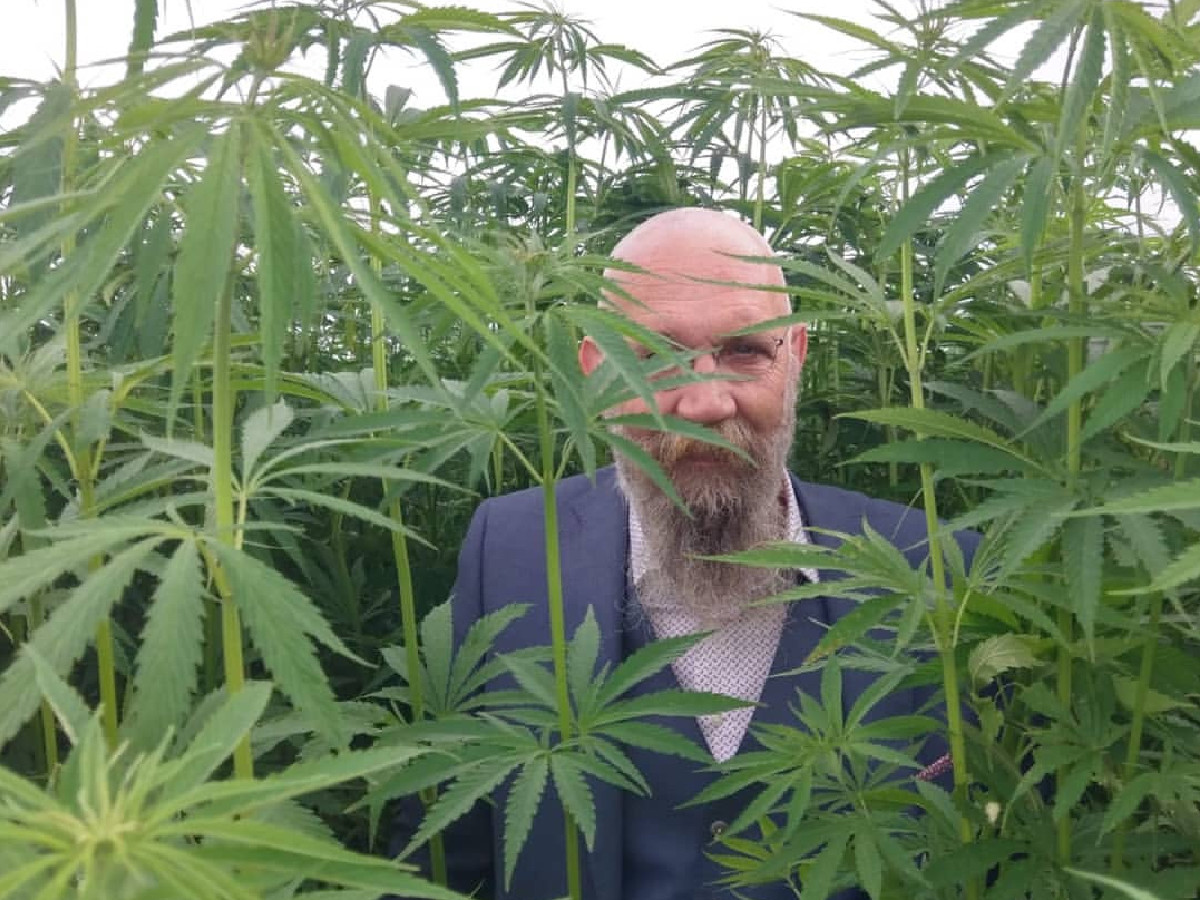 Former underground grower Rinus Beintema used to supply cannabis to Dutch coffee shops. But after being robbed at gunpoint and discovering the medicinal qualities of the plant, he decided to take a totally different approach. In 2015, he founded Suver Nuver, a cannabis social club that distributes full-plant cannabis oil at a very low price to its members, most of who are medical marijuana patients. Suver Nuver now has clubs in seven cities throughout the Netherlands, with more than 9,000 members who receive medicinal oil by mail. All of this is illegal under Dutch law — and that’s exactly what Beintema wants to change. Meet the man who has been dubbed “the Robin Hood of Cannabis,” who insists, “We must be careful not to be pushed aside by a few civil servants and scientists who will determine how the cannabis industry should operate.”

Beintema started working in an Amsterdam coffee shop in the 1980s and went on to become a cannabis grower, supplying several coffee shops with flower for their customers. Until just a few years ago, he thought the medicinal power of the plant was a fairy tale, dreamed up by Americans who wanted a justification for the weed they smoked. In a 2016 interview with Leafly, Beintema recalled, “About medical cannabis and dispensaries I used to actually think, They say they’ve hurt their finger so they can smoke a joint, you know? Like a disguised coffeeshop.”

But then, around five years ago, the father of one of his friends asked if Beintema could help him obtain cannabis oil. The man was suffering from severe arthritis and the cannabis oil Beintema prepared for him — in his attic, no less — helped relieve his painful symptoms. Within a week, the man could cut his doctor-prescribed pharmaceutical medication in half. “It really opened my eyes,” Beintema told Leafly. “I thought, Maybe those Americans are not con men, like I thought.” He started a Facebook page and was immediately flooded with requests for oil from all over the Netherlands. “Before I knew it, I was providing 200 people with cannabis oil. And this was all still from my attic at home.”

The founding of a noncommercial medical cannabis social club in Leeuwarden, capital of the Friesland province in the north of the country, was a logical next step. Supplying patients with full-plant cannabis oil is the primary short-term goal of Suver Nuver — which means “purely strange” in the local Frisian language — while changing the cannabis law remains the long-term goal.

After decades of secrecy, Beintema now tries to be as transparent and open as possible. He has appeared on national television and given numerous interviews, explaining how Suver Nuver operates. The cannabis is donated by commercial — i.e., underground — growers, usually in the form of trim or small popcorn buds. The club runs its own lab to produce the oil. Volunteers help out with packaging and administrative tasks. Suver Nuver uses different courier companies to deliver the oil, packed in sealed plastic bags, to its members. Around half of the members pay a monthly fee of €10, the others pay a symbolic amount of €1 annually.

Under Dutch law, full-plant cannabis oil is considered a hard drug and is on the same list as heroin and cocaine. While CBD oil is widely available, only a handful of pharmacies sell full-plant oil, which they create themselves from cannabis varieties provided by local legal medicinal cannabis producer Bedrocan. Ten milliliter bottles (.33 oz) cost between €50 (USD $57) and €178 (USD $204). Since Dutch health insurance providers have stopped reimbursing costs for medical marijuana, patients have been forced to come up with creative solutions to procure their medicine. Many now produce their own oil, obtain it through friends or order it online. A lot of them end up at Suver Nuver.

Beintema has always said he is ready to go to trial and face justice in his quest to provide product to patients. He’s confident that no judge will sentence him for helping sick people on a nonprofit basis. It took until August 2018 for police to interrogate Beintema for the first time about his “illegal” activities. Accompanied by his lawyer, he spoke for four hours to two detectives on August 23. Here, we discuss with him what that police interrogation entailed.

BigBudsMag: How did the police interrogation go?

Rinus Beintema: Let’s say there was a mutual respect. I’ve had different experiences in the past with the police and the way they talk to people. So, I think they recognize and appreciate the activist side of this project. I also think that they take the media attention into account. In fact, we expressed to each other that this was a very pleasant way to discuss matters.

BBM: What kind of questions did the police ask you?

RB: Specifically about myself and, inevitably, about my past. How do I make a living, stuff like that. For the rest, it was about Suver Nuver: The origins, the why, how and where, the way we work with suppliers, the payment system. The works, you might say.

BBM: And you could answer all their questions?

RB: I answered all the questions without naming names. I do not have to name the people who supply me with the product, just like a coffee shop owner doesn’t have to.

BBM: They didn’t press you on this specific aspect?

RB: Let’s say I’m a pretty seasoned veteran in this whole story. I know they write everything down and investigate anything you tell them. So, I expect the investigation will continue and they will now check to what extent I’ve told the truth. But that should be easy. The police made it very clear that they closely monitor me on social media. For example, they mentioned a Facebook post in which I had called on people not to go down to police stations with banners, but keep it business-like and civilized. They expressed their respect for the post, which was nice. But I also thought, now I have a confirmation that everything I do is under a magnifying glass.

BBM: So, you need to be extremely careful moving forward?

RB: You just have to think about how you say things and especially how things are written down. You know how often you have to correct things with the media? I’ve told a lot of journalists, “Friend, if you write this down, you will end up in court next to me, testifying against me.” Because, during my interrogation, the police left a lot of things out of the discussion. This is what surprised me the most. They only talked about myself, Suver Nuver and the way we work, the administrative side. And they brought up about five confiscations throughout the Netherlands, including a large number in Eindhoven. The mail company PostNL picked one package out there, probably because of a leak. After that leak, PostNL set up its own investigation team that went looking for our shipments. The funny thing is that there have been seizures until 2017, when we stopped using PostNL. There hasn’t been a single report to the police since. So PostNL did a good job assisting the police with their investigation.

BBM: And now you ship the oil via DHL only?

RB: We use about five or six different courier services now and we switch every month. There’s a good chance we will handle all transport ourselves in the near future. Look, in the event of a calamity, like a raid where they close down websites and bank accounts, I will have my own courier company in no time and we will send the oil, cash on delivery. I have about 10 alternatives like that, ready to go.

BBM: Can you tell us something about the future plans of Suver Nuver?

RB: I have a vision for the future: If [cannabis] becomes legal, I will simply continue to run the social clubs as a concept. We might change the concept somewhat. To increase the target group, I want to get a Suver Nuver bus on the road. We’re going to visit fairs and markets throughout the Netherlands. And we will manifest ourselves much more in recreational cannabis land, participating in festivals and organizing festivals. With Cannabis Liberation Day gone, there’s of course quite a gap. I think that’s too bad. So, we have four big cannabis events planned for 2019 that we’re putting together as we speak.

RB: That’s what I do. My whole approach is stirring things up in a positive way as much as possible. Please don’t complain about how bad things are, because we all know that by now. We must fight together, to turn this into something positive. In the next 18 months, I will try to get the Dutch cannabis scene together, to let everyone benefit from the wave of media attention I’m generating. Of course, all of us must fully benefit from this. And we should stop blaming each other and making accusations. Let’s stay positive and unite. That’s my main message. I feel too much resistance in my own ranks, from within the Dutch cannabis scene. It shouldn’t be like that. We shouldn’t work against each other; that only benefits the system and the prohibitionists.

BBM: Are you optimistic about the future of cannabis in the Netherlands, the experiments with regulated cannabis production for the coffee shops, for example?

RB: I’m certainly positive, I’m glad that there’s finally attention for the subject. But I think there’s still a long way to go and that we must therefore unite to make our input clear. We must be careful not to be pushed aside by a few civil servants and scientists who will determine how the cannabis industry should operate. To prevent this, we need a serious platform. Unity is power in this story, I think. So that’s where I’m putting a lot of energy into now. We get so many requests and new members that we’re able to do some real interesting things in the next year and a half. All the money goes right back into cannabis events and other initiatives to end cannabis prohibition.

BBM: What do you see as the biggest risk for the future of Suver Nuver?

RB: Fundamentally, Suver Nuver is designed to explode. My biggest priority is the safety net for our customers. I’ve been working on a plan B, C, D and E for over a year now, so that if there’s a calamity that prevents us from working openly, we can continue underground. The police asked me, “If the insurance companies would reimburse medical cannabis again, would you stop?” I said, “If there’s a good safety net for our customers, I will personally pull the plug.” Because then I would have achieved a lot of what I set out to achieve. My battle to liberate the plant would still continue, because I have several goals in this story. My personal goal is quite simple: I just want to grow my own plants. But that will be a very long story, as you know. On the medical side, as chairman of Suver Nuver, I have to take responsibility for our customers. As long as there’s no real alternative — meaning a good product that doesn’t cost a fortune — they can lock me up 10 times, but the Suver Nuver project will still continue.