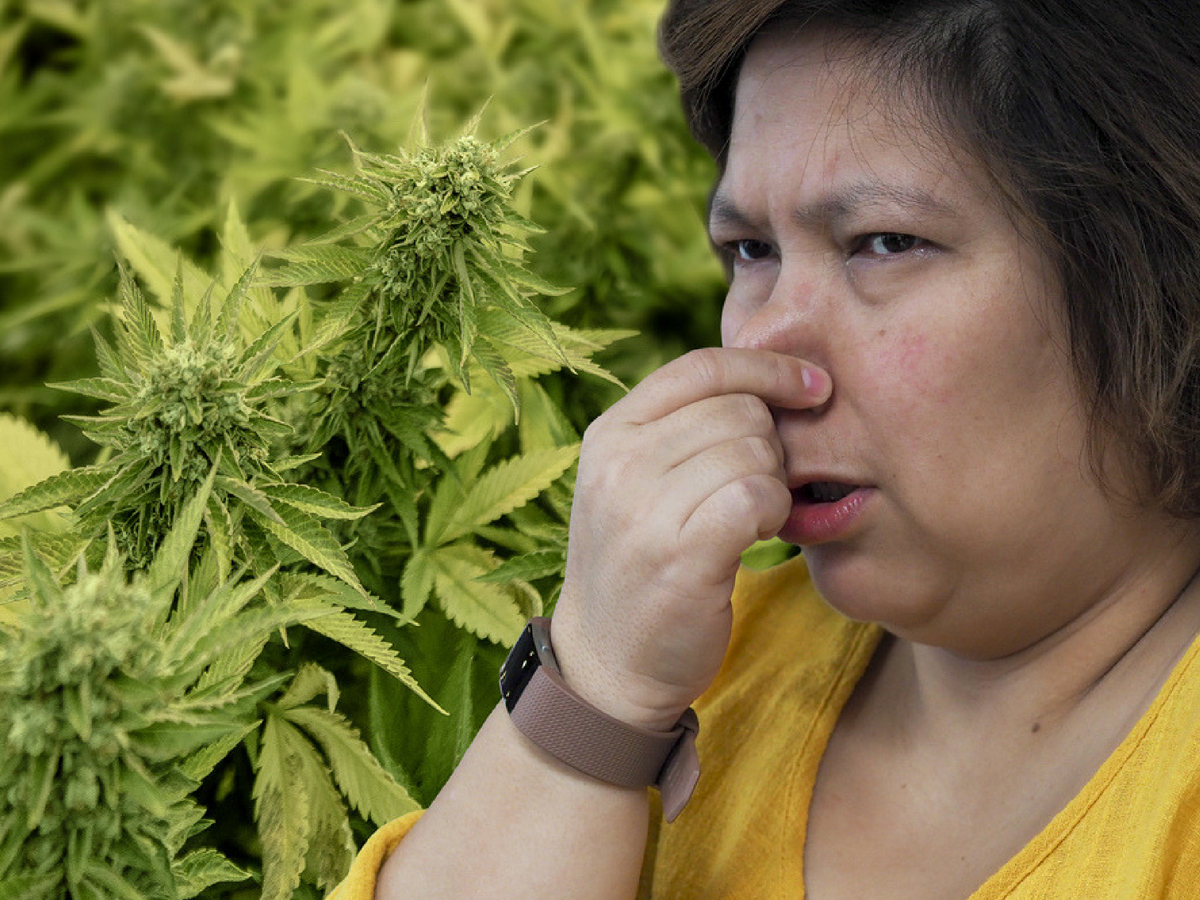 The winding road along Hwy 116 in Sonoma, California looks like a travel brochure come to life.

Quintessential wine country, the geography is an endless mesh of pretty vineyards threading the hillside like the pattern of a homemade quilt.

Local Joan Harrington says she’s driven this stunning roadway for over two decades and knows every twist and turn of the region.

“I’m very lucky, this is my drive to and from work every day,” says Harrington. “It’s really a very special place.”

Lately, she says, over the past couple years, there’s been an added feature to her wine country commute: “The unmistakable fragrance of cannabis in the air.”

It happens strongest during certain times of the grow season, most notably just after crossing a farm culvert, and lasts for a few hundred feet before the sharp turn points her car north again.

“It’s just this creeping faint smell at first like pine and lavender near that area, then a big burst of skunk smell,” she explains. “Some people really hate that odor around here. It’s a kind of upscale community and people don’t want that new pot culture mixing with wine culture. I happen to love it.”

Harrington feels it’s just another side of the “evolving farm community” in the area — like the stands selling cherries by the roadside mixing with the vineyards that have existed there for over a century.

But not everyone in the Golden State shares Harrington’s proclivity for the nascent marijuana industry or for the heavily aromatic presence it often produces.

As California weaves its way through the first year of legal recreational weed, the industry certainly has its work cut out for itself building a legitimate, state-run framework. From hurdles like licensing new state-sanctioned cultivators, to the prevention of driving under the influence, the myriad obstacles the weed business faces are many and complicated — not the least of which is the suppression of the often-substantial dank smell that accompanies pot production.

It’s become an issue so pervasive across the state — and indeed across the US — that specific building codes have been developed around the engineering of cannabis smell concealment.

All across the legal West Coast, the situation has churned up conflicts between cannabis producers and neighboring populations who are crying foul over the smells. A story featured in Rolling Stone recently showed how in Lane County, Oregon, locals are peeved by the potent scents emanating from marijuana grows. They say the smells have begun to greatly infringe on the nearby community, with one complainant comparing the intense odor in the air to “skunk dipped in turpentine and gym socks.”

The Rolling Stone article explains how local city ordinances eventually were put in place to bring indoor marijuana growers up to code, specifying everything from the position of exhaust vents to the strength of the fans used to circulate air in cultivation facilities.

Daniel Gustafik, owner of cannabis design and engineering company Hybrid Tech, works at bringing cannabis grow sites to code. Rolling Stone reports that the company has helped set up industrial-scale legal cannabis operations in Lane County, as well as pot growers in 37 states, and assembled design solutions that include the mitigation of the strong odor produced during cannabis cultivation.

“If you put the whole building under vacuum,” explains Gustafik, “you could be standing in front of the house and smell nothing. You can successfully get zero smell.”

It’s systems like these that are becoming the norm for indoor grow locations across the country — which tends to mean happier residents living close to those cannabis production zones.

But the question remains: What to do about outdoor or greenhouse cannabis farms, where smells are more difficult to contain?

In Carpinteria, a farming community a little over an hour’s drive north of Los Angeles, some locals say they are fed up with the large amount of marijuana greenhouses cropping up around the area. The Mercury News reports that while all of the cultivators involved are legal marijuana grows, such a spike in growth has the town worried that the new cannabis culture could change the hometown feel of the city, which for many years was a thriving producer of cut flowers.

And then there’s the smell.

“We don’t want a marijuana smell,” Xave Saragosa, a native of Carpinteria who lives near a cannabis greenhouse, told The Mercury News. “We want fresh air.”

Saragosa said that the smell of cannabis permeates his hillside home at night and keeps his wife up coughing.

In response to the problem, Carpinteria instituted rules in February that require cultivators to submit odor abatement plans and designated an agent to handle complaints.

The situation magnified after Santa Barbara County, of which Carpinteria is included, granted the largest number of marijuana cultivation licenses in California since recreational legalization began at the beginning of this year. Once a thriving locale for cut-flower cultivation before the US government granted trade preferences to South American countries in the 1990s, the town is now a booming center for cannabis production.

Toni Stuart, a retired Episcopal priest, told The Mercury News that she wouldn’t like to see Carpinteria become the “‘cannabis capital’ of Southern California. I like it the way it is. It’s a very quiet, unpretentious beach town.”

But the move toward cannabis cultivation, particularly for towns with flagging industries like Carpinteria, is irresistible due to the potentially massive tax revenues they can create. As municipalities welcome those large revenue dollars, more and more cities will be grappling with just how to correctly roll out regulations — including issues like odor control — that are equitable for producers and residents alike.

In Sonoma, Harrington says she believes cannabis growers are being put under a microscope because they are seen as a threat to the wine industry in the region.

“Already in California you hear talk of appellations with regard to marijuana, like with wine,” she says. “Mendocino and here in Sonoma. Pretty soon there will be cannabis tasting rooms where pot is offered. Other industries and residents here need to realize that reality.”

She notes that no industry is perfect, saying, “Even with the vineyards nearby us, sometimes the smell of fertilizer in the air is absolutely atrocious. But you live with it, because it’s part of life here in wine country. Well, it may soon be part of life in pot country, too.”

The push and pull between consumers and commerce, says Harrington, is probably going to come down to town hall negotiations, where people are hopefully interested in mutually advantageous solutions.

Stuart feels like it comes down to something even more basic: Good manners.

“If people want to grow cannabis instead of flowers or avocados or macadamia nuts — I suppose that’s their right,” she says. “But they’ve got to think about their neighbors.”