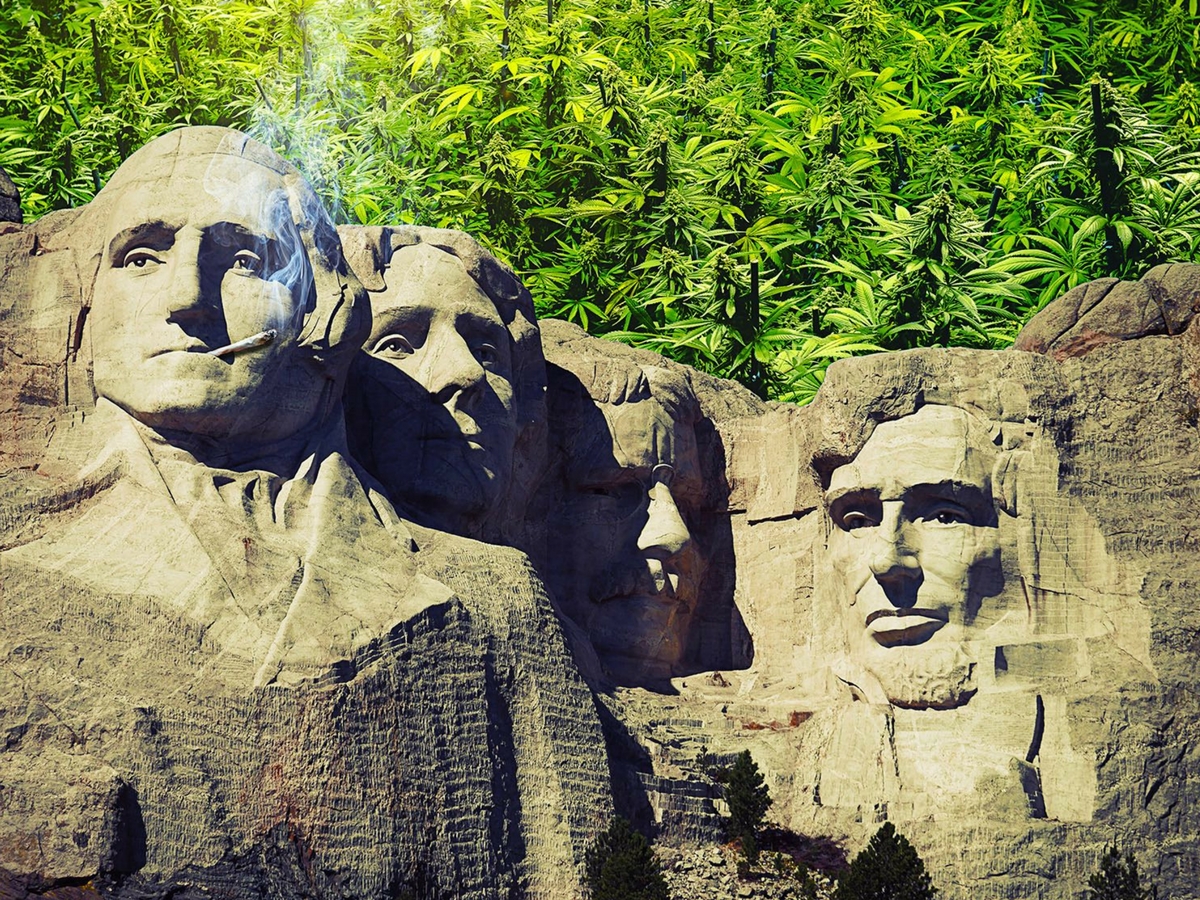 The year is 2018. Twenty-nine US states have approved the sale of cannabis and its derivatives for medical and/or recreational purposes. This may mark a return to the history of acceptable marijuana use that dates back to colonial America. So, on Presidents’ Day, there is renewed interest in what US presidents, past and present, have thought about cannabis, whether their message is anti or pro. Let’s take a look at a few of them.

Hemp was a cash crop in America long before anyone was thinking of independence. While hemp is a variety of the cannabis plant, it was largely marketed for fibers and rope. But even Pilgrim grandmothers had developed a tradition of hemp-derived potions, salves and teas for their legendary curative powers.

By the middle of the 18th century, even presidents were cultivating cannabis, some as experiments and others as cash products. Presidents George Washington, John Quincy Adams and Thomas Jefferson have all left records of cultivation and development of cannabis on their plantations.

Washington and Jefferson were excited about the potential in cannabis as a marketable commercial product. Washington is known to have said of the crop, “Make the most of the Indian hemp seed and sow it everywhere.”

He also kept detailed records of his own hemp cultivation in his grow log:

Began to separate the male from female plants rather too late. … Pulling up the [male] hemp. Was too late for the blossom hemp by three weeks or a month.

Jefferson was equally emphatic in his appreciation of the plant. “Hemp is of first necessity to the wealth & protection of the country,” he wrote. A dedicated proponent of the versatile plant, it could be said that Jefferson was also a drug trafficker, having once smuggled hemp seeds from China into France while serving as a foreign ambassador, and even invented a tool for crushing the plants’ stems during fiber processing.

Beginning in the 1770s, the American War of Independence turned presidential foresight into a payday for farmers. Cannabis hemp became vital for the production of tents, uniforms, sails and ship rigging. More durable and cost-effective than wool, cannabis fast became a major crop and export. It’s reported that Founding Father Benjamin Franklin owned a mill that converted cannabis fibers into paper.

Presidents James Monroe, James Madison, Andrew Jackson, Zachary Taylor and Franklin Pierce smoked cannabis and referred to its benefits in writing. Monroe began smoking the plant prior to his presidency, while serving as the ambassador to France. Madison once remarked that hemp gave him insight to create a new and democratic nation.

Some presidents used cannabis for its medical benefits, while others used it purely for pleasure. Jackson, Taylor and Pierce shared cannabis with their troops. In a letter to his family as a general in the Mexican-American War, Pierce wrote that cannabis was “about the only good thing” in the war.

John Adams advocated hemp as a multipurpose crop. Writing as Humphrey Ploughjogger, he authored a mysterious quote in a 1763 issue of the Boston Evening-Post. Replete with poor grammar, Adams wrote of the advantages of growing hemp:

Seems to me if grate Men dont leeve off writing Pollyticks, breaking Heads, boxing Ears, ringing Noses and kicking Breeches, we shall by and by want a world of Hemp more for our own consumshon.

Prohibitionists started to demonize cannabis as troops returned from military events in Mexico at a time when anti-Mexican sentiments were running hot. As the military moved across the US before and during World War I, they carried marijuana with them in the greatest social relocation of Americans in history.

In 1937, all forms of cannabis, including hemp, were made federally illegal under the Marihuana Tax Act. Drafted by Harry J. Anslinger, the first commissioner of the US Treasury Department’s Federal Bureau of Narcotics, the Marihuana Tax Act essentially ended the maturation of a promising industry and complicated the relationships presidents had with the plant — either you were distinctly for or against it, depending on your political leanings.

Growing hemp remained illegal and was widely unseen until World War II. The federal government then cultivated hemp for military uniforms, canvas, rope and other products, as soon as hemp imports from the Philippines and Indonesia were cut off by the Japanese military.

The government then called on all “patriotic” farmers to grow hemp, promoting the effort through a Hemp for Victory campaign. Under the newly formed War Hemp Industries Department, the government subsidized the cultivation of the much-needed plant.

According to Chris Conrad’s Hemp for Health: The Medicinal and Nutritional Uses of Cannabis Sativa, the United States lobbied hard for President Dwight Eisenhower to force the United Nations to adopt the Single Convention Treaty on Narcotic Drugs, but to no avail.

Perhaps the most widely referenced account of John F. Kennedy’s alleged marijuana use was an anecdotal account of his supposedly being introduced to recreational pot by Mary Meyer, one of his mistresses. This account was originally published in the National Enquirer in 1976 and referenced in the 1984 book The Kennedys: An American Drama by Peter Collier and David Horowitz.

The reports of JFK’s consumption of marijuana were repeats of an allegation made by a man who had previously been adjudged mentally ill and who a court had appointed a conservator to handle his affairs. While JFK’s medical records indicate the president used prescription drugs to cope with chronic back pain and the symptoms of Addison’s disease, cannabis was not listed as one of those medicines.

It was President Richard Nixon who launched the war on drugs. Part of this aggressive stance, the Controlled Substances Act, placed cannabis into Schedule I, along with heroin and LSD, more due to Nixon’s animus toward the counterculture with which he associated marijuana than to scientific, medical or legal opinion. Indeed, in 1972 the Shafer Commission, an investigative body appointed by Nixon, recommended that marijuana be decriminalized and thus removed from Schedule I. Nixon vehemently rejected the commission’s report. During a 1971 White House conversation in the Oval Office, Nixon is reported to have said, “I want a goddamn strong statement on marijuana.”

President Jimmy Carter didn’t consume weed. But his son Chip did, with reports widely circulated that he smoked weed with Willie Nelson on the White House rooftop. Still, in 1977, possibly foreshadowing the ineffectiveness of criminalizing cannabis users, President Carter addressed a formal message to Congress, writing:

Penalties against possession of a drug should not be more damaging to an individual than the use of the drug itself; and where they are, they should be changed. Nowhere is this more clear than in the laws against possession of marijuana in private for personal use. We can, and should, continue to discourage the use of marijuana, but this can be done without defining the smoker as a criminal.

Carter remains one of the most prominent presidents in and around the earliest conversations about cannabis decriminalization, and the first president to openly support legislation amending federal law to eliminate all criminal penalties for the possession of up to one ounce of marijuana.

Speaking at a forum in 2014, Carter reiterated his 1977 position that drug criminalization disproportionately affects minorities and is ineffective in discouraging use:

The ’80s through 2013 saw little federal movement on cannabis legalization or decriminalization. President Ronald Reagan said, “I now have absolute proof that smoking even one marijuana cigarette is equal in brain damage to being on Bikini Island during an H-bomb blast.”

However, he never offered up that “absolute proof.” His wife Nancy coined the infamous Just Say No drug campaign that’s been overwhelmingly considered a national failure.

President Bill Clinton said that while studying at Oxford University in England, he “experimented with marijuana a time or two.” He added that he “didn’t like it, and didn’t inhale, and never tried it again.”

President George W. Bush evaded questions on marijuana use, but according to the BBC, he did say, “I wouldn’t answer the marijuana question,” adding that it was because he wouldn’t “want some little kid doing what I tried.”

As reported in The New York Times, President Barack Obama admitted to using cocaine and marijuana while growing up in Hawaii. “When I was a kid, I inhaled. That was the point,” he said, in what appeared to be a subtle dig at Clinton’s non-confession.

In 2013, Obama’s administration took the first impactful and decisive shift in the liberation of state’s rights in and around cannabis laws, with the release of the Cole Memorandum. The document urged states “not focus federal resources in your states on individuals whose actions are in clear and unambiguous compliance with existing state laws providing for the medical use of marijuana.”

It was President Obama who also signed the 2014 Farm Bill, launching a hemp pilot program enabling select American farmers to grow hemp. The act distinctly defined industrial hemp from other forms of cannabis and, in states where hemp is legal, authorized colleges, universities and other institutions of higher education, and state departments of agriculture, to grow the crop for research.

In 2016, Fox News asked then-presidential candidate Donald Trump whether he’d ever smoked cannabis. He responded, “I have not,” adding, “I would tell you 100 percent because everyone else seems to admit it.” Along with Trump came notoriously cannabis-averse Attorney General Jeff Sessions and the political and presidential environment in which America lives today.

So, on this Presidents’ Day, feel free to light up with your troops like the early presidents did, knowing you’re paying reverence to the history of these United States.

The Rewards Of Routine: These Are The Habits That’ll Make Marijuana Growing A Bed Of Roses
Black Market Philanthropy: How New Regulations Are Shuttering Cannabis Charities In California