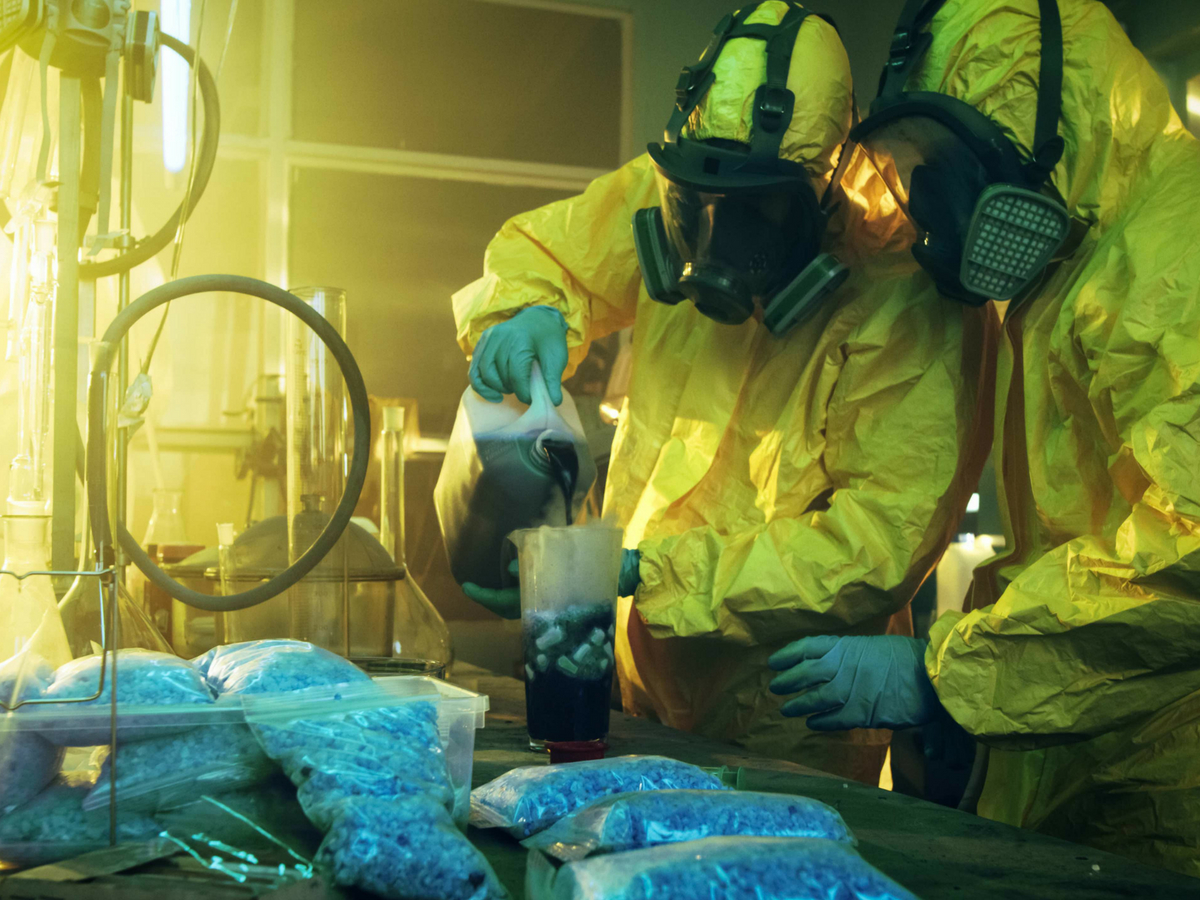 Anti-cannabis crusaders have long spewed bizarre rants against weed and its efficacy as a medicine, but the Drug Enforcement Administration (DEA) took slagging to a whole new level when it released an intelligence report, likening marijuana grow houses to “the new meth houses.”

The DEA’s dire warnings two years ago about the alleged dangers of indoor grow ops were nothing new even back then, but anti-cannabis politicians and bureaucrats are now following the DEA’s lead by further demonizing indoor marijuana growing, especially in states where cannabis is the most legal.

The DEA and law enforcement agencies throughout the world have long used the tactic of utilizing the small percentage of unsafe grow ops as evidence that all indoor grow ops create risks for people who live in the vicinity. They’ve also claimed that police and first responders, especially firefighters, risk serious injury when they enter a grow op.

In legal states like Colorado, medical marijuana patients are now allowed to grow up to 12 plants in a single dwelling (down from the previous allowance of up to 99 plants). The DEA has alleged that the “permissiveness of Colorado’s medical and recreational marijuana laws [mean that] the system is extensively exploited by traffickers who operate large marijuana grows that supply out-of-state markets.”

Further, the DEA says local police departments receive numerous calls from citizens who suspect cannabis grow ops are in their neighborhood. This suspicion is aroused by such indicators as:

The DEA also alleges that dwellings turned into grow ops are subject to substantial and often dangerous modifications, including structural damage, mold, and damage to the electrical wiring and plumbing.

No doubt we growers all share concerns about the health and safety of our grow houses. Out of hundreds of growers I’ve met, fewer than a dozen have been deliberately uncaring about the problems that can come from a poorly maintained indoor grow op. And in all my years of growing, I’ve only seen three media reports of grow-house fires.

Which makes me wonder, is law enforcement and the DEA going out of their way to demonize marijuana by likening grow houses to meth labs?

You can understand why police officers oppose growers who use vicious guard dogs and booby traps to protect their grow ops, cash and firearms. Canine training companies advertise their wares in print and online, offering attack dogs to patrol grow-house perimeters and inside the house, as well as for licensed cannabis dispensaries.

I once visited a grow op operated by a motorcycle gang and guarded by pit bulls. One of the dogs attacked me and I had to knock it away with my camera tripod to stop its rampage. Rather than showing concern for my safety, the biker gang were annoyed I’d hurt their expensive pooch.

Booby traps are less common than guard dogs. Growers who have military experience or who have working in demolition and mining might have learned a thing or two about explosive or chemical booby-trapping techniques.

Among the more innocuous booby traps are hidden spikes, or self-locking doors to trap unsuspecting visitors in areas of your home otherwise unoccupied by your crop.

Police are smart to be worried about dangerous dogs and booby traps, and should be careful when kicking down doors and rushing through people’s homes during pot raids.

Better yet, why not just stop conducting cannabis raids altogether, and spare everyone the trouble they cause?

Mold, Mildew, Fungi And The ‘Dangerous’ Smell Of Cannabis

The worst violence I was ever subjected to was when I was attacked by a gang of armed robbers. But I couldn’t call the police because this gang was part of a marijuana task force who used a battering ram to break down my front door. These officers terrorized me and my home for several hours, all for growing 27 indoor cannabis plants.

Indeed, the cops were trussed up like Navy SEALs — some were even wearing gas masks and hazmat suits. Even though I was afraid for my life, I had to laugh out loud whenever they stood near the open screen door of my patio, gasping for air and complaining that the smell of live marijuana plants made them nauseous, dizzy and gave them headaches.

And as I lay on the floor in handcuffs, watching as they destroyed by furniture, clothing, grow rooms, plants and hydroponics gear, I listened to them boast of their heroic work attacking other plants and growers.

From what I could ascertain from their banter, it sounded like kicking gardeners’ doors down and invading their homes is far more dangerous than raiding violent criminals or serving in the military.

Why do some law enforcement believe that?

Because some grow houses are filled with caustic chemicals, mold, mildew and fungi that these officers are deathly afraid of.

Several cops spoke of being hospitalized after invading a grow house with air that was filled with carbon dioxide. Some said they’d been injured by tripping on wires or lifting plants in 20-gallon containers, bitten by guard dogs, burned by grow bulbs, or had been treated for serious respiratory illness from mold and mildew.

I’ve been in hundreds of grow rooms and have seen mold and mildew in only a small percentage of the rooms, and only on plants.

I was dismantling a friend’s grow op in which he had problems with interior relative humidity and had decided to give up that particular house so he could grow weed elsewhere.

When we ripped down the Panda Film from his walls, there was a thick mat of ugly mold behind it; one wall was almost completely covered in the toxic growth. Police believe those mold spores could take root in lungs, causing chronic health problems.

We weren’t wearing any respiratory protection device, nor were we wearing gloves. We tore all the white plastic off the walls, went out and bought chlorine bleach and pump sprayers, nuking the walls with bleach.

I’ve combusted or vaped plenty of cannabis that had mold spores and powdery mildew, yet have never succumbed to any respiratory illness. But police remain terrified of breathing inside a grow house.

In an attempt to not draw unwanted attention to their grow ops, most growers do not steal electricity from the grid or from unsuspecting neighbors — rather, only a small percentage of growers engage in such theft. Because the stealing of electricity is likely performed by amateurs who have little or no electrical training, this can create further hazards for a raiding police crew, unaware of the creative wiring put in place.

This is especially true when police raiders start ripping crops out, and if the plants are in deep water culture or similar hydroponics systems, water can flood out of disturbed hoses and reservoirs, coming into contact with electrical outlets, creating a risk of electrocution.

Structurally, some growers have been known to knock out load-bearing walls or make modifications to their interior spaces. When police raid these dwellings, they could potentially be crushed or injured by collapsing ceilings and walls. Similarly, heavy and cumbersome grow gear such as light stands, light movers, and ebb and flow tables have also been known to crash down on unsuspecting grow-op “guests.”

According to a report published earlier this year by Colorado news outlet Westword, local police are concerned about grow houses, with Colorado Springs Police Detective M. Adam Hughes calling marijuana grow ops the “new meth houses.” Hughes claimed grow houses are one of Colorado’s two worst drug problems — the other being opiates — and that Colorado legalization is being used as a cover for black-market growing to produce cannabis that’s exported to prohibition states.

Hughes based much of his allegations on data provided by the federally funded Rocky Mountain High Intensity Drug Trafficking Area program. But the program’s data has since been called into question, because its research was spearheaded by Tom Gorman, a longtime and vocal opponent of Colorado cannabis legalization. Local real estate agents were even quoted as questioning Hughes’ assertion that Colorado Springs is filled with illegal cannabis grow ops.

“I think I’ve only seen one [house] that might have been a grow house,” said Denver realtor Greg Eckler. “I don’t think it’s this widespread problem.”

Hughes asserted that large-scale illegal grow ops damage homes and neighborhoods, and will lead to a collapse in real estate prices. He went on to recount a raid on a Colorado Springs home that allegedly had 464 plants growing in the basement. The officer noted that the interior of the home had extensive structural damage, water leakage, humidity issues and mold, with “so much heat and humidity rising through it that the ceilings were literally breaking down.”

The detective further claimed that in some Colorado counties, grow ops are using so much water that it’s draining local wells. Ultimately, Hughes wants a change to the state’s constitution, making it illegal for anyone to grow cannabis in their home.

Note that Colorado Springs is dominated by the United States Air Force Academy base and is one of the most conservative, anti-cannabis cities in the state. Detective Hughes isn’t alone in his consternation about marijuana gardens inside homes.

Professor John Martyny of the University of Colorado, Denver recently published a lengthy study, titled Health Effects Associated with Indoor Marijuana Grow Operations, which includes data on the hazards for residents of grow houses, as well as for those who invade them during law enforcement raids. In fact, Martyny likens to a child abuser any adult who runs a grow house in which children reside.

His report’s findings are based on a review of 30 indoor grow ops in Denver — some legal, others not so legal. The report claims the following:

The Solution: Run Your Cleanest Grow Ops Ever

Obviously, it’s in the best interests of the cannabis cultivation community to not have grow houses that are plagued by mold, mildew, electrical faults, flood risks, booby traps, chemical risks, dangerous air or structural defects.

And we can all agree that if children are present in a home where there’s an indoor garden, there has to be strict, unyielding protocols to ensure that the grow op is 100 percent safe, and that children aren’t endangered in any way, ever.

Professional growers at every level — from closet growers to warehoused licensed producers — must equip themselves with the knowledge of how to set up and run indoor cannabis gardens without creating safety hazards.

We must know how to maintain our homes so that no outsider would ever know cannabis plants are inside. If you have a clean, safe grow op, that’s just a foundational requirement to keeping yourself and your customers safe.

But if you’re careless with grow op security and you get raided, whether or not the police officers end up with respiratory problems or poisoned by chemicals, you’re still busted.

People who oppose the cannabis community want to demonize indoor grow ops and try to pass laws that would ban them for good. At a time when so-called legalization in many ways appears to be nothing more than an attack on independent craft growers, we don’t want to give the drug warriors any ammunition that would further limit our rights.

Let’s do everything in our power to provide no justification for anyone to claim that cannabis grow houses are like meth labs. Our plants, our industry, and our community is better than that.