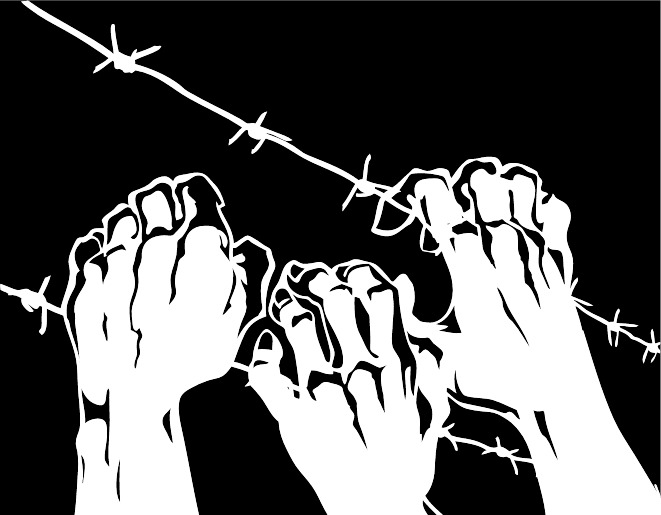 We celebrate that the majority of Americans favor marijuana legalization.

But don’t be fooled by the good news: marijuana growers and users continue to suffer persecution, prejudice, and violence at the hands of police.

For example, in Texas you can be jailed for decades, just for minor marijuana crimes.

But that’s not all: your wife, daughter, sister, or mom can also be pulled over on Texas highways and forced to undergo a roadside search of their vaginas and anus.

That’s exactly what video evidence reveals in the case of three women pulled over by Texas law enforcement in two different traffic stops that had nothing to do with marijuana until officers falsely suggested without probable cause that the women were concealing marijuana inside their body.

Female police officers then proceeded to stick their fingers into the women’s genitals and anuses.

No marijuana was found.

In one case, the women were pulled over for “littering.”

Texas officials have portrayed these horrific incidents as caused by a few “rogue police officers,” but reports indicate this was a general stop-and-search policy for Texas police, not just a couple of crazy, sick female cops who liked to anally and vaginally penetrate innocent female citizens.

One of the Texas officers involved was fired. The other was fired and charged with assault.

But the profiling and harassment of citizens on Texas highways and in their homes as part of the war on marijuana has been going on for decades.

After police discovered her parents were pot-smokers, they called in the state’s Child Protective Services agency and had the child stolen from her parents and placed in foster care.

Alexandria’s father Joshua Hill said his marijuana use in no way interfered with his family’s ability to care for Alexandria.

He said he and his wife were worried…because when they’d see Alexandria after she was placed in foster care she looked like she was being abused.

But that didn’t matter to Texas officials, and now Alexandria’s foster care mother has been charged with murder after the child died due to injuries that officials suspect came because the foster mother beat her.

But it isn’t just Texas.

In the state of Michigan voters passed a medical marijuana law in 2008, but have watched with sadness as Michigan politicians, police and others have gradually weakened the law’s protections.

Parents who personally begged the Michigan Medical Marijuana Review Panel to add autism to the list of eligible medical marijuana conditions say panel members totally dissed them, their children, and medical evidence in rejecting the request to make autism an eligible condition.

“The Michigan medical marijuana system, and the decision to deny autism as an eligible condition, are a complete farce,” said one distraught parent of an autistic child. “They had panel members like Dr. Jeanne Lewandowski, a quack who’s part of the pharmaceutical pain relief industry that hands out drugs that can kill you, saying you can’t give medical marijuana to children because it might hurt them. The lack of medical knowledge, ethics, and compassion from people like Lewandowski is terrible for our family and for autistic children.”

In Jackson, Michigan, the City Council passed an “illegal law” that tells state-licensed medical marijuana growers they can only use 20% of their home to grow marijuana.

Dozens of medical marijuana patients and growers who attended the public meeting on the law walked out, saying that Michigan’s medical marijuana law is being unfairly gutted by politicians, courts, and police.

As a female marijuana grower and user, I feel a lot of fear whenever I see a police officer.

In the one encounter I ever had with a police officer, when I’d just finished getting high in a park, the officer made implicit verbal sexual overtures, and groped my crotch and breasts during his illegal, non-consent search of my body.

I was lucky to have no cannabis in my possession (the joint was gone before he targeted me).

When I complained to police higher-ups that this officer had done an illegal search and had made sexually suggestive comments and had fondled me, I was treated very rudely, and no assistance was offered.

What we have to remember is the drug war is a real war.

It’s asymmetrical warfare, and the police have all the weapons.

Those of us who grow marijuana don’t wage the war.

We try to peacefully live our lives, enjoying the miraculous cannabis plant.

Police, legislators, prosecutors, and courts try to destroy us.

Every year for the past 30 years, at least 700,000 Americans have been arrested for marijuana “crimes.”

Our opponents seem to think we’re stupid, lazy stoners who won’t fight back.

But due to our efforts, marijuana legalization is more popular than ever before.

Along with saying Black Lives Matter, we say “Marijuana Growers and Users’ Lives Matter” too.

And we will not rest until we end the persecution and brutality used against the marijuana community, so that everyone can grow and enjoy this plant that offers so many benefits to humanity.