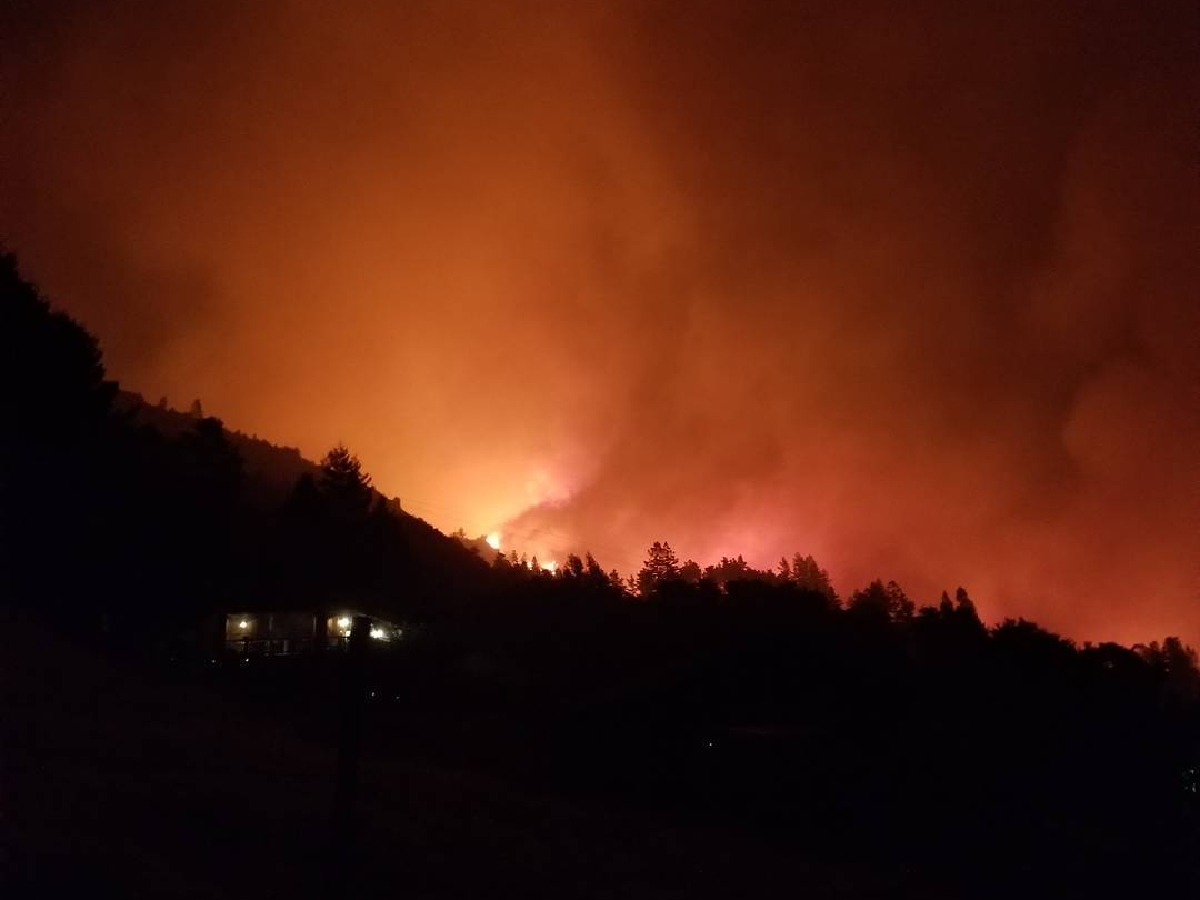 His outdoor marijuana crop near Redwood Valley, planted in a terraced pattern on a hillside, along with a hut, his water tank, irrigation tubing, vehicle, guns, fertilizers, some clothing, and perhaps most heartbreakingly, even his dog are all gone.

Given that R.T. was likely to harvest two pounds of bud per plant, at a wholesale price of $1,500 per pound, the destructive force of the fire to his 37 plants means a potential uninsured income loss of around $111,000.

“Harvest time was here. The fire raced in from the east. It was at night. I couldn’t tell how far away or [in] what direction. By the time I realized it was headed up my hill, it was too late to do anything other than run for my life,” he recalls.

He had time to save nothing and no one. He ran for his life until he came to a creek that he jumped into, and that’s where he stayed until he saw the flames turn with the wind and go the other way.

R.T. says it’s the loss of his dog that hurts the most. Worse than losing 37 large cannabis plants that were partially harvested or soon to be ready for harvest.

“Down the road, some people died. I can’t think of anything other than my dog being on fire, and needing me there for her, but I wasn’t there. She was scared of the smoke. She ran away the wrong way. A wall of fire caught her.”

At the time of publication, California fire officials say the death toll had risen to 23 people, with as many as 500 people reported missing, at least 3,500 homes and structures destroyed, 180,000 acres consumed by flames, and with most of the wildfires not even close to being contained.

The mainstream media has been focusing mostly on fires in Northern California involving the ravaged city of Santa Rosa, and the famed wine country tourist destination of Napa Valley.

But the media has largely ignored fires in other counties such as Butte, Mendocino, Yuba and San Luis Obispo.

A marijuana activist and grower who lives in hard-hit Sonoma County where Santa Rosa is located said he’s personally aware of at least five grow houses completely incinerated by fires that burned entire neighborhoods to the ground.

“This was a firestorm. The wind itself was fire,” said the grower, who spoke on the condition of anonymity. “Sonoma is known as a major producer of indoor and outdoor cannabis. Based on the number of growers I know personally, and the reach of these fires, I estimate we’ve lost at least $35 million worth of marijuana and marijuana growing structures and supplies already.”

The grower said he’s heard at least one report of law enforcement called in when fire officials found evidence of a grow op in a burned-out structure.

Below is a video of the Santa Rosa fire as seen from a helicopter.

Cannabis seed breeder and Weed Nerd YouTube star Subcool — whose company TGA Genetics is known worldwide for unique, potent cannabis strains — is one of the unlucky Northern California residents who saw everything he’d built, dreamt of, and worked hard for suddenly go up in smoke.

“I had to run through flames with my dog Toke to escape with my life,” Subcool says. “I lost everything else. Rare cuts, such as the Pinot Noir, are gone. Male plants are gone. My beautiful outdoor garden is gone.”

Subcool, who suffers from a genetic form of emphysema known as chronic obstructive pulmonary disease, has seen his periodic doses of lifesaving medicine interrupted. He lost his custom-built home and everything in it, but has since been provided refuge by his breeder friends at Norstar Genetics.

“The first day after the fire and the escape from it, I was in a state of shock, like that adrenalin rush you get after an accident. I had this goofy smile, even as I said to people, ‘I lost everything.’

“The magnitude of it didn’t really hit me until I went back to my burnt-down property and reached up where there used to be a shelf that had pictures of me and my wife, and a jar of the new strain of seeds called Mendo Dope. Everything just crumbled away. Everything was ashes. It was then that the shock wore off and the grief came on.”

Like many growers, Subcool is now struggling to pick up the pieces. He feels grateful and lucky that other cannabis breeders who work under his TGA umbrella have cuts or seeds of some of the core genetics, such as Romulan and Space Dude, that form much of the TGA seeds repertoire.

“We can reconstitute some strains, even though it will take a while. The resellers have most of our strains in their inventory, but I don’t know how long that will last. We lost the beloved Pinot Noir forever,” he admits.

One note of hope amid the disaster’s sadness is that some of Subcool’s associates, who have cannabis processing and extracting gear, are offering help in attempting to salvage concentrates from buds that haven’t been totally destroyed, but rather, have only been contaminated by smoke.

Subcool explains that cannabinoids and terpenoids evaporate or chemically degrade when buds are subjected to extreme heat, but buds that weren’t subject to open flame or heat extremes can be processed by extractors to salvage at least some THC and CBD.

“You can’t use the terpenoids because they’ll have a smoky taste,” Subcool says. “People are making jokes about buds contaminated by smoke, calling that weed ‘Campfire OG.’”

Before these fires flared, Subcool had already planned to temporarily relocated and start a new venture further afield in Arizona after he harvested, dried and cured his now-incinerated 2017 outdoor garden.

He’s opening a greenhouse with 7700 square feet of floor space in Phoenix, where his crew will plant 500 Jesus OG Kush seeds. These seeds will be grown under the watchful eye of social media so that the Weed Nerd nation can weigh in on their favorite phenotypes. The winning phenotypes will be tested genetically, and for cannabinoid and terpenoid profiles. The most impressive phenotypes will then be certified as an official Subcool varietal before being sold as clones and whole bud.

This process of phenotype genetics and lab profile testing, selection, and certification is the first of its kind as far as Subcool knows.

However, now that he’s lost his NorCal home, Subcool anticipates moving to Arizona sooner than expected.

“I guess I could put a trailer on my ash-covered Northern California land and live in a trailer or a tent,” he says. “But I don’t think I could stand the ghosts. I couldn’t stand to wake up every day and see the dead zone where my home, garden, and beautiful trees used to be.”

The Whole SCROG: Getting To The Root Of Cannabis-Growing Maximum Yields With Screen Of Green
Schedule I: Here’s How To Plan Your Indoor Marijuana Growing Season