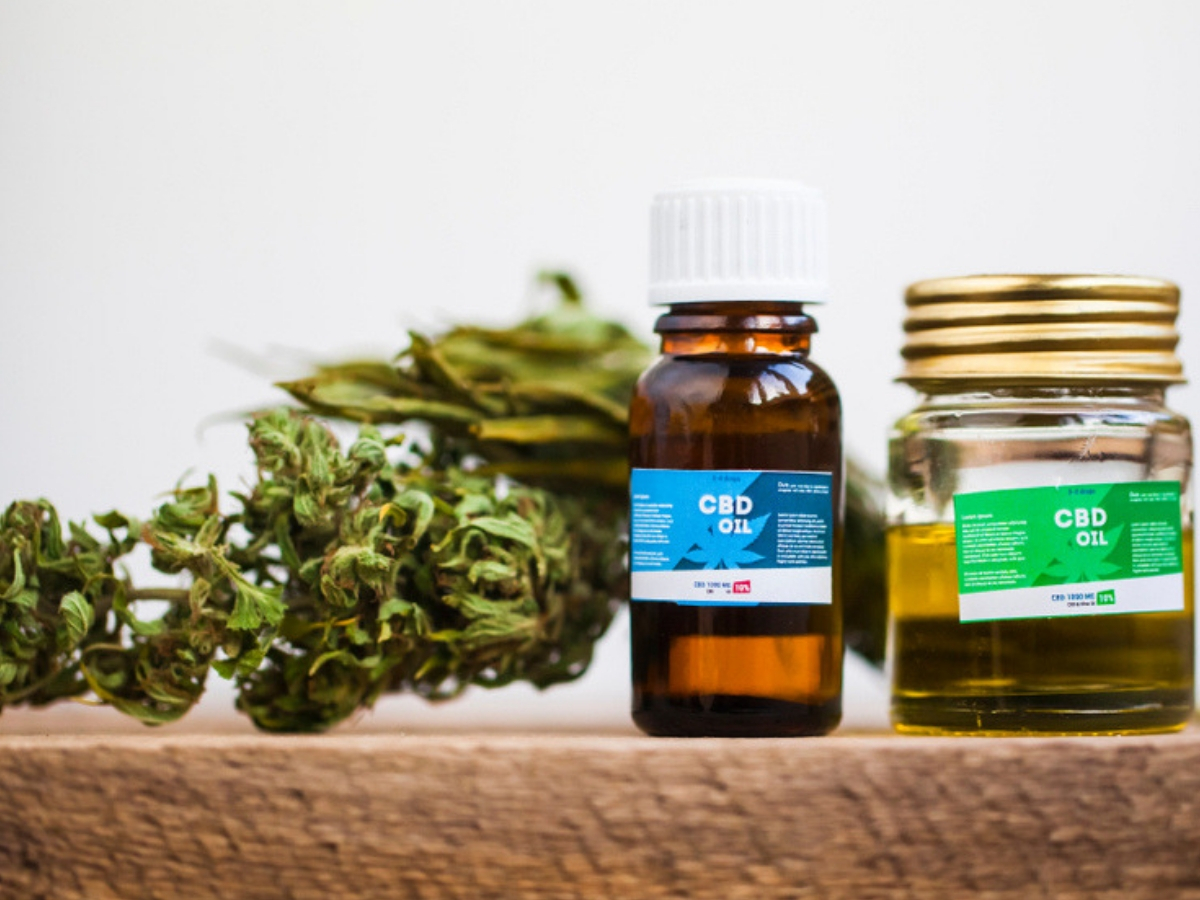 Hemp has become incredibly popular in the past decade. As more and more states legalize recreational cannabis, more and more people are also learning about cannabinoids such as cannabidiol, better known as CBD. But many people still have misconceptions about what CBD actually is and its legality, particularly the difference between hemp-derived and cannabis-derived products.

In Part 2 of this two-part series, we investigate why CBD businesses have been raided by authorities throughout the United States, plus we explore the risks for CBD business owners in urban areas following the damning visit of a state health inspector to a Manhattan baker.

If you thought cannabis raids were limited to the Pacific Northwest or the Rocky Mountains, you’d be wrong. Any business selling CBD products is vulnerable to some type of government intrusion or repression — particularly, it seems, if you are located in New York City.

On February 1, 2019, an inspector from the Department of Health visited Fat Cat Kitchen, a locally owned restaurant that offers CBD-infused baked goods on its menu. The New York Times reports a health inspector then sealed up all of the store’s CBD goods — which were comprised of chocolate chip cookies and Rice Krispies Treats — in a plastic bag and ordered the management to immediately stop selling these CBD-infused products.

While this wasn’t a raid per se, the incident does mimic other recent storefront crackdowns, in that some type of government institution — in this case, the Health Department — is attempting to ultimately halt sales of CBD.

“The Farm Bill has finally passed and made hemp-derived CBD legal, yet [New York City’s Department of Health and Mental Hygiene] is just now putting a ban on what has the potential to improve economic gains, benefit small businesses and, most importantly, help people,” Ron Silver, owner of Manhattan-based restaurant company Bubby’s and founder of cannabis company Azuca, tells Big Buds.

These crackdowns are significant because it ties the rural raids to urban ones. While they’re slightly different, they do appear to have one common end goal: prohibition. Although President Trump signed the Farm Bill into law in December 2018, New York City has referred to Food and Drug Administration Commissioner Scott Gottlieb’s statement regarding adding CBD to food products, according to CNBC. The statement claims that the agency would continue enforcing a ban on adding CBD — since it is legally still classified as a drug, per FDA approval of Epidiolex — to food and drinks for the time being.

“While products containing cannabis and cannabis-derived compounds remain subject to the FDA’s authorities and requirements, there are pathways available for those who seek to lawfully introduce these products into interstate commerce,” Gottlieb said in the statement. “We recognize the potential opportunities that cannabis or cannabis-derived compounds could offer and acknowledge the significant interest in these possibilities. [The FDA is] committed to pursuing an efficient regulatory framework for allowing product developers that meet the requirements under our authorities to lawfully market these types of products.”

“And again, [CBD is federally] legal,” Silver stresses. “This type of ban is simply not in line with the city’s best interests and it deviates from legislation in other states that we should really be looking to mirror, such as Colorado and Oregon.”

But of course, New York’s Department of Health isn’t only targeting this single business, nor is Fat Cat Kitchen alone in selling CBD edibles. Throughout the city, plenty of restaurants, coffee shops, bakeries and other establishments have CBD on their menus, whether they’re infusing it in food or adding it to cups of coffee or cocktails.

CNBC also reports the New York City Department of Health plans to order businesses to discard CBD, starting this July. Then, in October, it plans to begin issuing violations, fining restaurants who refuse to comply with that rule. The fines would be at least $200 and are likely to negatively impact a restaurant’s letter grade.

Additionally, the Health Department, which presently conducts restaurant inspections in 21 of the state’s 62 counties, has some additional plans up its sleeve to enact similar prohibition in all 21 of those counties. 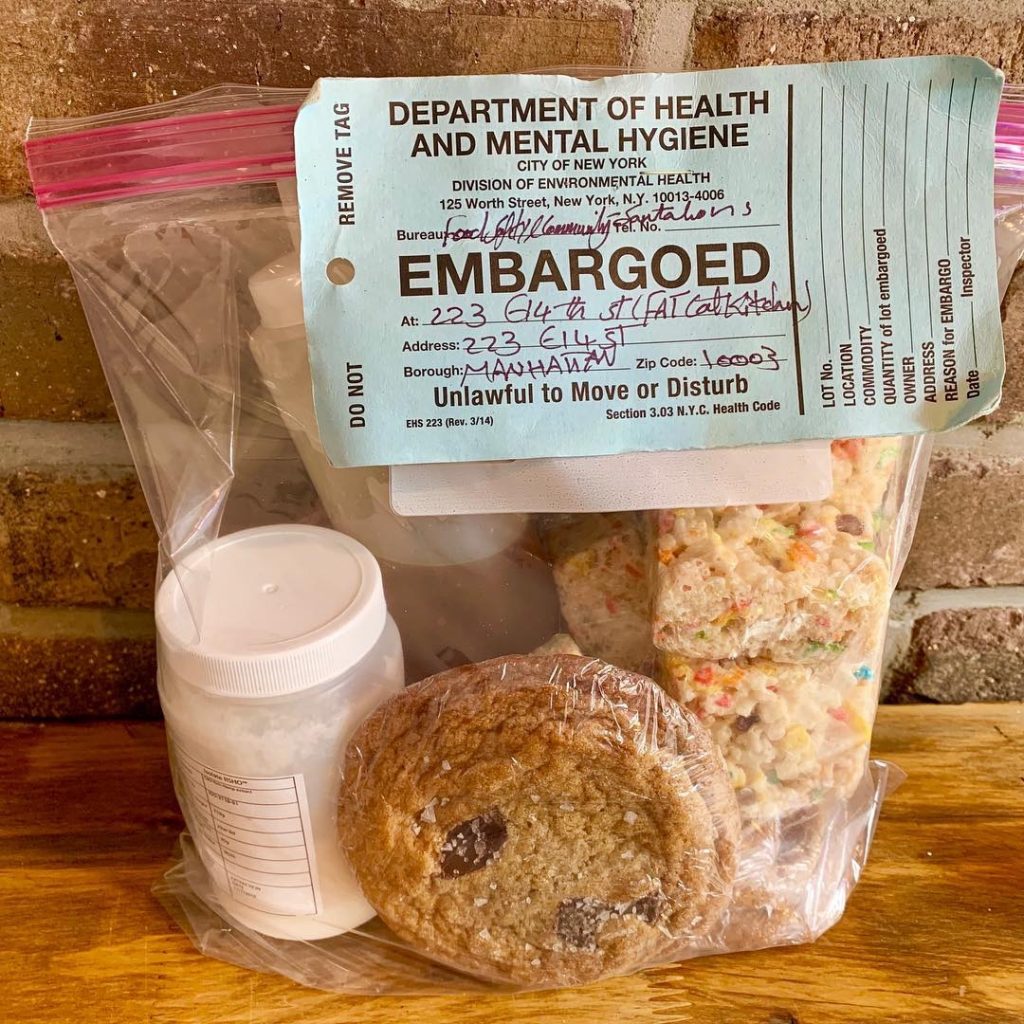 After the New York Health Department paid a visit to Manhattan’s Fat Cat Kitchen, it was forced to remove all CBD-infused products from its menu, including these cookies and Rice Krispies Treats.
(Image courtesy of @fatcatkitchen)

“The best way to avoid a visit from the health inspector is to take CBD off the menu,” she tells us. “Seriously, even though the 2018 Farm Bill legalized industrial hemp, CBD still operates in a gray area and the FDA has not approved CBD for consumer consumption on a national level.”

The gray area that she is referring to is due to the fact that everything changes once you add CBD to consumable products, meaning your menu items become edibles. The federal government has yet to provide guidance on how to navigate adding CBD to food and beverages, making it difficult for small businesses to understand what is presently legal and what is not. Until then, states and municipalities are left to lead with Gottlieb’s vague statement.

But we know that prohibition doesn’t fly with everyone, and in that case, Margolin stresses that if you are going to “keep your CBD on the shelves, keep it out of the food or drinks you serve.” In other words, if you want to continue selling CBD, do so separately and do not infuse it with any foods or drinks. That way, consumers are free to do what they please with the CBD they purchase.

“The New York Department of Health has confirmed that CBD-infused edibles are not allowed to be sold in restaurants, bars or anywhere else,” she adds. “Strangely enough, the Department of Health said that restaurateurs can sell CBD on its own. Basically, until the FDA approves CBD [and deems it] safe for consumption, keep it out of all of your brownies, lattes and pastries.”

Although the Farm Bill can be considered progress, even among many cannabis advocates, it’s not comprehensive, as the FDA has yet to class CBD as safe for consumption. Soon enough, New York City business owners could be vulnerable to fines and harsher penalties for keeping CBD on their menus. This issue is much bigger than the actual edibles, because it echoes prohibition — something we’ve been fighting all along.

Oh, Natural: Why Going Organic Is The Key To Success In A Growing Cannabis Market
First Major Clinical Trial On Cannabis As A Treatment For PTSD Has Been Completed