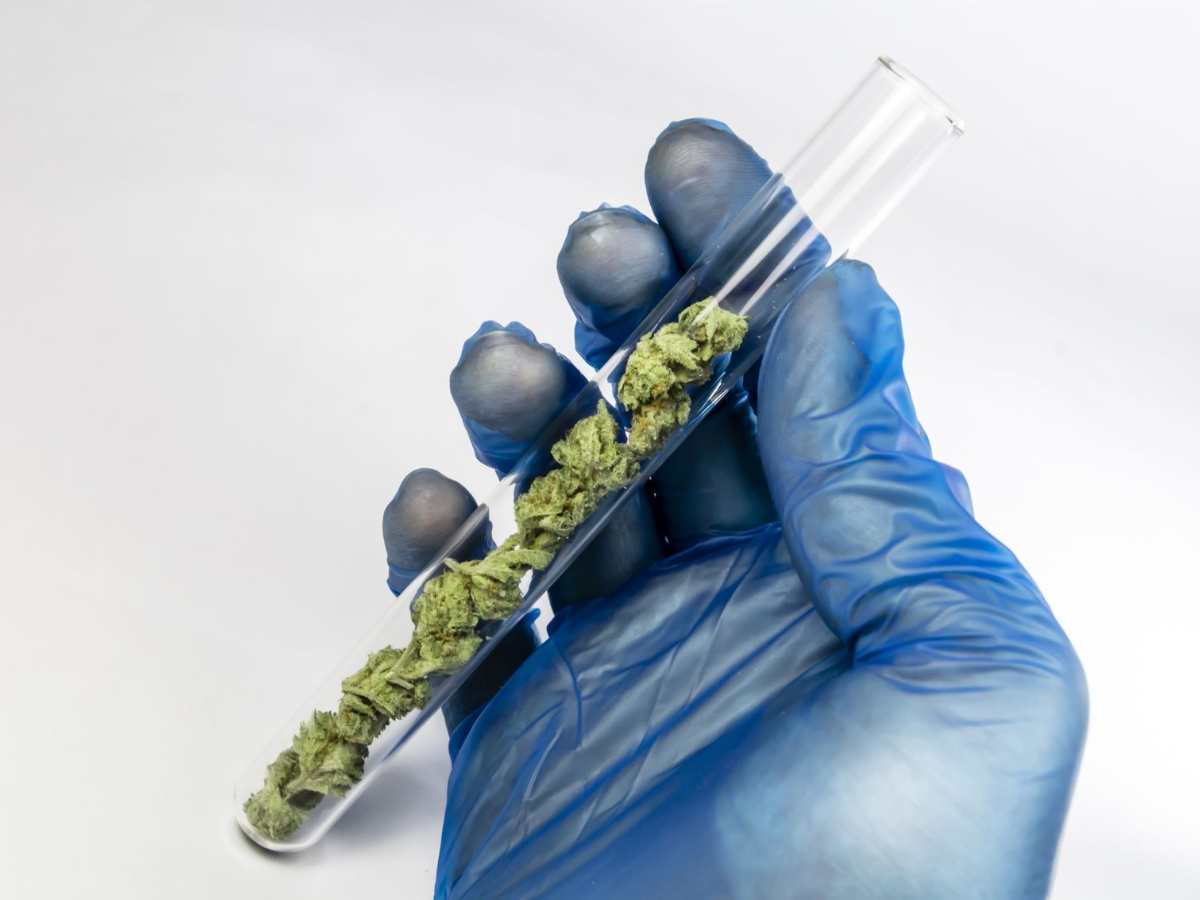 It’s happened too many times — the ultimate cultivator nightmare. You’ve spent months caring for your cannabis crop and it’s grown into a beautiful harvest. You’ve taken down the buds, trimmed and packaged them, but now the lab results are back from testing and it’s bad news: Your crop has high levels of contaminants and has to be pulled from the market and destroyed. You’ve invested time and money into this crop and now there will be no return on that investment. Unfortunately, it’s too late to do anything about it.

This is an all-too-real scenario that can drastically affect business, and until recently there hasn’t been much hope for growers looking to avoid it. But a new testing technology is paving the way for cultivators to take control of their destinies and catch contaminants before it’s too late. Developed by the scientists at PathogenDX, PDx-Quant is still in its early stages, but its innovative approach could mean big savings for cultivators everywhere.

Despite the painful scenario described above, most would agree that testing for contaminants is important. As consumers, we want to know what’s in our cannabis and that it’s safe to consume. For those who use cannabis medicinally, this is even more crucial. Many cannabis patients suffer from compromised immune systems and could be vulnerable to dangerous strains of bacteria, mold or yeast. Even for those who don’t suffer with health issues, it’s nice to know that your cannabis isn’t full of potentially deadly contaminants.

Fortunately, testing is mandatory in most states with cannabis regulations enacted, and there are limits to how much contamination is allowed.

But how is this cannabis contamination measured?

Yamashiro explains that in the cannabis industry, much like the food industry, petri dish tests are the norm. Scientists put a sample in a petri dish and literally wait to see what grows. Colonies of mold, yeast and bacteria develop in the culture over a period of days, and then the scientist will count the colonies. This count determines the colony-forming unit (CFU), which is the measurement for whether a test passes or fails. If the limit in a state is, say, 40,000 CFU, and more than 40,000 colonies grow in the petri dish, then your test has failed and your cannabis cannot be sold.

The petri dish method is standard for testing agricultural products sold as food, so one might think that Big Agriculture and the Food and Drug Administration have figured out the best methods for finding contaminants. Unfortunately, this method of testing has problems that create health risks for consumers, and business liabilities for cultivators.

“The food safety market is continuing to put fires out,” explains Milan Patel, co-founder and CEO of PathogenDX. “Seven hundred seventy recalls per year. A $54 billion impact to society. Thousands of people getting sick and dying.”

What is problematic about this testing procedure? According to the scientists at PathogenDX, there are three major areas in which our current tests fail to provide what the market desperately needs.

One of the big issues facing petri dish testing is time. Because laboratory testers are literally waiting for organisms to grow, it’s a process that can’t be rushed. It takes 48 to 72 hours to do a petri dish test. Perishable foods like lettuce can’t sit around for two or three days during testing, so food may be sent out to market before the results come back. Even if a recall is issued, the contaminated food may have already been purchased and eaten by consumers by this stage.

“The methods they’re using are antiquated and can’t give you the answer quick enough to impact public health, safety and quality,” Patel explains. While we’d like to think our food is totally safe, the testing systems leave a lot to be desired.

The length of the test also causes problems for cannabis testing. “It takes a lot of time to grow — at least three days, maybe even longer, and that’s three days where you have a product waiting to be released to market,” Yamashiro says.

The length of the test also means more time investment for the testing lab, which increases prices and makes the tests more expensive.

2.Cannabis Testing Can Be Too Expensive

The best bet to avoid contamination in an operation is to test early and often throughout the cultivation process. One might test different areas of the grow facility regularly so that if there are contamination issues, they can be fixed early, or at the very least, the infected crop can be destroyed before months of time, labor and resources have been invested. But the current tests are too expensive for it to be cost effective to test frequently and in many locations.

If you want to know the specifics of what is in your cannabis, and not just how much contamination is present, additional tests will be needed, which will bump up the cost even more.

3.Not Enough Information On Cannabis Contaminants

Perhaps the biggest issue in petri dish testing is the lack of information on the contaminants that are present. In this type of testing, scientists simply count the contaminants, but they can’t tell what they are. “How do you know what species this is versus that one?” Yamashiro asks. “Even highly trained microbiologists and mycologists will have a challenge trying to identify them.”

But why should we care what species your contaminant is?

“The big deal is, you could be failing,” Patel explains. “The industry, the sector could be failing good samples, your samples. We’ve seen 20-percent failure rates in California, up to 30 percent in other states. Everybody looks at this data and says, ‘It’s a fail,’ but nobody’s asking the question, ‘What’s in it?’”

Not all of these failed samples contain dangerous contaminants, however. Some might contain benign or even healthy organisms, rather than ones that pose a risk to consumers. In some cases, there might be a completely safe crop that fails the test and has to be destroyed. This can be a particular issue for organic growers who often use healthy probiotics in their cultivation techniques.

The particulars matter a great deal, since some of the organisms tested for can be deadly, while others might promote good health. “Only about one percent of the organisms out there are actually pathogenic to humans,” Yamashiro explains. “You could have 100,000 in there, and maybe none of them are pathogenic.”

On the other hand, if there is a low amount of an extremely dangerous pathogen, it might pass testing but still pose a threat to consumers. A test that can distinguish between these different scenarios could protect consumers from false passes, just as much as it protects growers from false failures. 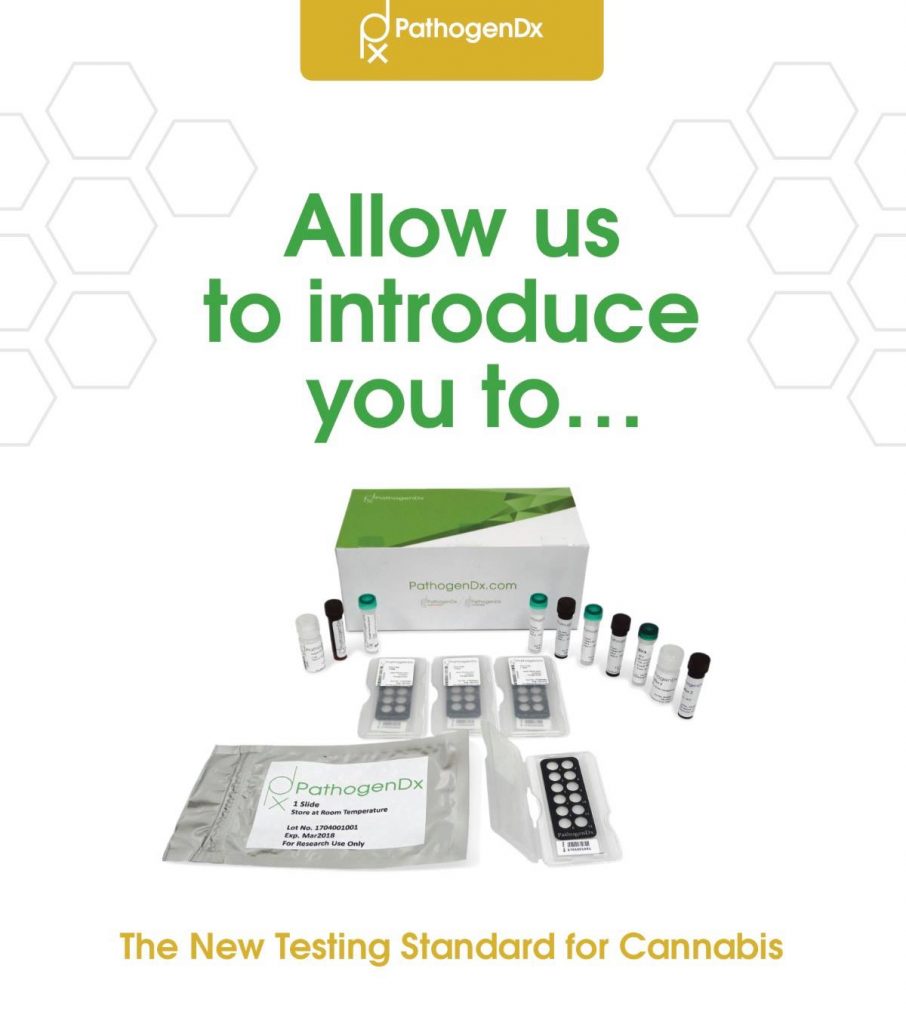 The current testing situation is far from perfect, and PathogenDX’s founders have been looking for a solution. “You need a tool kit that’s going to give you the answer to clean up the supply chain, to tell you what’s in it, and what’s driving that contamination,” Patel says.

Luckily, PathogenDX’s new test PDx-Quant looks like it might be the solution we need. It utilizes DNA technology to quickly and inexpensively test for microbiological contaminants — while still being able to tell you what’s in your crop.

Yamashiro says the technology utilizes something called a microarray, which is a small glass slide that can be read quickly with a scanner — no dayslong colony growth required. “This slide has 12 wells on it. Each well contains 144 little spots of DNA on here, and each DNA represents a different type of organism.”

For its test, PathogenDX looks at 48 different potential organisms and tests for each three times to add greater confidence to its results. The slides are put through a scanner that can detect not just how many microbiological organisms are present, but exactly what those organisms are.

“You can do a lot of samples and you can look for a number of different organisms, not just one or two, but dozens of organisms all at the same time,” Yamashiro explains. This opens up a world of possibilities, since the standard technology would require you to do 144 separate tests to get the same data — an expense that simply doesn’t make sense.

Its test, which takes only six hours, can be used for testing your harvested cannabis crop, but PathogenDX is also promoting this test for use on grow facilities. With one swipe of a cotton swab, you can test different areas of your grow facility to ensure that everything is clean and uncontaminated from the start. This test can alert growers to specific contaminants before it’s too late, let them know exactly where the problem is, and what contaminant they need to address. A cost-effective test like this could catch problems early and avoid the tragic scenario of losing an entire crop to a failed test.

Of course, one of the desired benefits of this test is to avoid failing crops that have been contaminated by benign bacteria, mold or yeast. But this benefit may be slow to become a reality. The way the current law is written, CFU counts above a certain limit will still fail, even if they don’t have dangerous contaminants in them.

“It’s going to be a process. Right now, they’re going to take the literal interpretation of the standard,” Patel explains. But PathogenDX is geared up to lobby for reform. “We’ll have to work with the regulators to get to that point where they’ll use that resolution of information and set meaningful standards. Then maybe that would cause the regulatory agencies to rethink regulations down the road.”

Hopefully these regulatory changes will happen sooner rather than later and stop the destruction of good crops. But in the meantime, cultivators can utilize this new technology to catch problems early and identify contaminants before it’s too late.