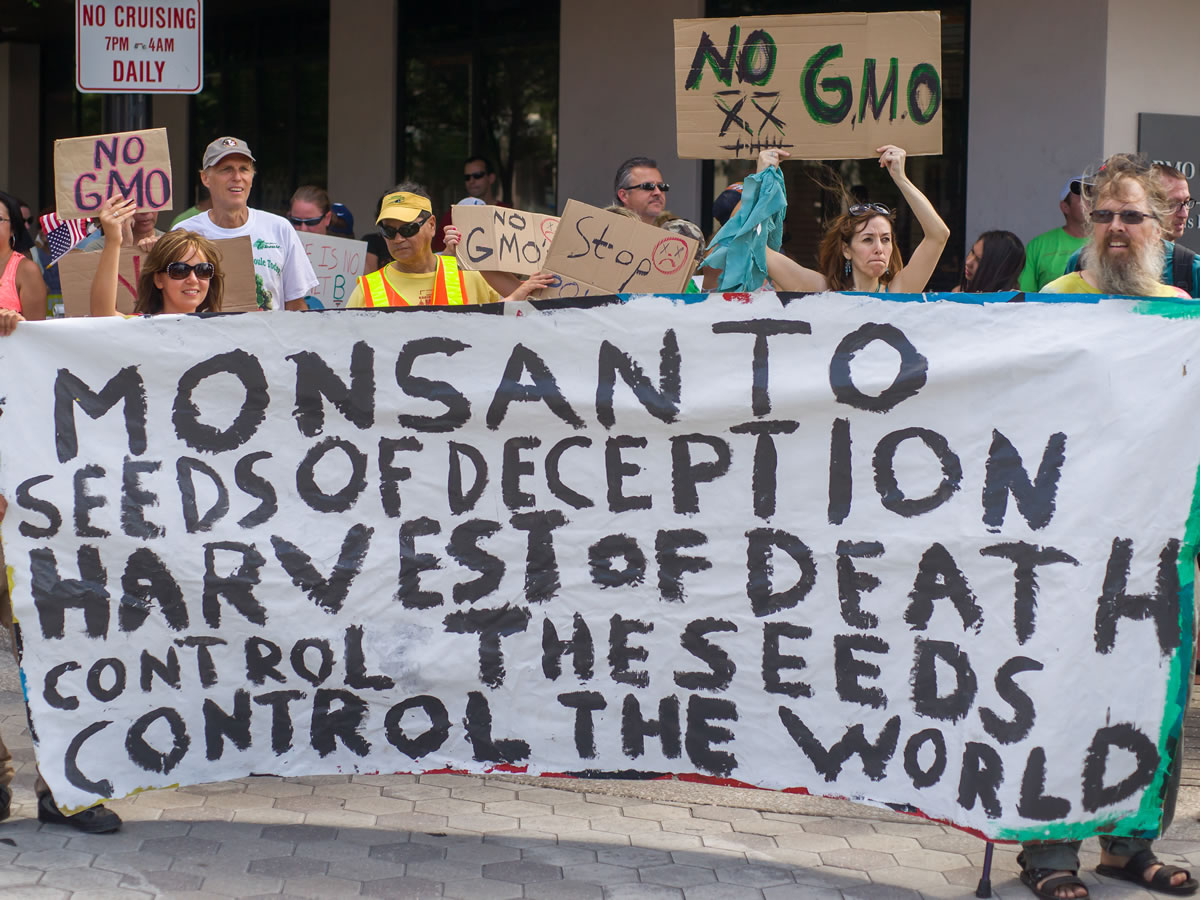 At the Maximum Yield Indoor Gardening Expo in Boston several years ago, I was shocked to discover that Monsanto (a convicted GMO corporate criminal known for making chemicals that kill marijuana plants and ecosystems) was at the expo!

At the Boston expo, you wouldn’t have seen the name “Monsanto.”

Instead, you saw a front company called “Novozymes.”

Novozymes is an international GMO (genetically modified organism) company teamed with Monsanto in a partnership called “The BioAg Alliance.”

When Monsanto and Novozymes set themselves up as “The BioAg Alliance,” they seemed to be using the trademarked name of a natural-products agricultural company called BioAg™.

Insiders at the Maximum Yield Boston Indoor Gardening Expo told me Monsanto and Novozymes were trying to co-opt the name of the existing company.

But after the real Bio-Ag company challenged the Monsanto front company, Maximum Yield was forced to ask the Monsanto/Novozymes people to leave the expo!

Monsanto and Novozymes reportedly are still trying to use the trademarked Bio-Ag name and even made a logo that looked like the BioAg™ logo.

A representative for the real Bio-Ag told me his company is aware of Monsanto’s attempt to steal its name and image, and is having its lawyers look into extended trademark protection.

And it’s especially ironic that the real BioAg™ is a company dedicated to finding alternatives to industrial, chemical, poison, GMO agriculture.

Monsanto and its allies in the GMO and Big Ag industries are working hard to create a planetary monopoly so they control all the seeds for food crops.

Just read the compelling book Seeds of Destruction:The Hidden Agenda of Genetic Manipulation, and you’ll see exactly what I mean.

If you’re not aware of how evil Monsanto is, take a moment to consider the company’s long history of criminal behavior…

Monsanto encourages farmers to nark on each other regarding “unauthorized” use or sale of GMO seeds.

These same tactics would likely be used if cannabis is turned into a patented GMO crop, something GMO companies are pushing for.

In the famous case of Canadian farmer Percy Schmeiser, pollen from Monsanto GMO canola blew onto Schmeiser’s canola plants from another farmer’s field.

And then Monsanto successfully sued Schmeiser for “pirating” its GMO canola genetics!

The corporation started more than a hundred years ago as a chemical producer, and has been involved in many activities that harm people and the earth.

The company manufactured deadly chemicals such as DDT and PCB that were later banned because they create birth defects, other health problems, and serious environmental harms.

Monsanto knew about the dangers of its products, but continued to manufacture and promote them.

Read here to see internal Monsanto documents that prove it.

Monsanto is seen as primarily an agricultural and GMO company, but it’s also heavily involved in the pharmaceutical industry and in war profiteer industries.

Monsanto partnered with IG Farben, the German chemical firm that was the financial core of Hitler’s regime.

Farben was the primary supplier of the Zyklon-B poison gas the German government used during the extermination phase of the Holocaust.

During its peak involvement in pharmaceuticals, Monsanto marketed harmful pharmaceutical “medicines” such as the “arthritis drug” Celebrex.

Celebrex competes with medical marijuana, but cannabis is a far safer medicine that more effectively treats the same conditions as Celebrex, which has a huge list of negative side-effects that cannabis doesn’t have.

To this day, Monsanto refuses to admit that Agent Orange caused any harms.

It denies its own corporate heritage.

“Monsanto today, and for the last decade, has been focused solely on agriculture,” Charla Lord, a spokesperson for the company, said when asked to comment on the company’s past history in the country. “But we share a name with a company that dates back to 1901. The former Monsanto was involved in a wide variety of businesses including the manufacture of Agent Orange for the U.S. government. The U.S. courts have determined that the contractors who manufactured Agent Orange for the government are not responsible for damage claims associated with the military use of Agent Orange because the manufacturers were government contractors carrying out the instructions of government.”

In a convenient refusal to accept responsibility, Monsanto says it isn’t to blame for what Agent Orange did to Vietnam because it was “only following orders” from the U.S. government.

Monsanto pushes GMO crops in part because GMO crops require the increased use of pesticides and herbicides made by Monsanto and other poison manufacturers.

Monsanto pays off governments and media to say that glyphosate is safe, but a whistleblower who reviewed Monsanto’s own internal documents has exposed how glyphosate is a dangerous chemical that shouldn’t be allowed anywhere, especially in agricultural uses.

And they partnered with Drug Enforcement Administration (DEA) contractors to supply an extremely-concentrated  version of Roundup sprayed on cannabis and coca plants, and people, in South America.

Although Monsanto’s massive public relations department claims it’s no longer a chemical company, the company’s GMO crops are designed to sell chemicals—farmers have to use tons of Roundup and other chemicals to control weeds on Monsanto’s GMO “Roundup Ready” crops

In partnership with Novozymes in the BioAg project, Monsanto markets GMO microbes and other unnatural organisms and materials.

Monsanto and a handful of other GMO companies control nearly 100% of the seed stock for most of the world’s fundamental food crops.

Monsanto and the rest of the GMO industry claim that GMOs are safe and wonderful, but their claims are based on studies conducted by scientists and university researchers paid off by Monsanto to say GMOs are harmless.

Monsanto buys or partners with more and more corporations, and provides millions of dollars in political donations, gifts, and “legal” bribes to political parties, politicians, and regulators.

Monsanto is also in business with Scotts Miracle-Gro, another corporate criminal, which recently infiltrated the hydroponics nutrients industry by buying General Hydroponics, Botanicare, and Gavita.

Read more about that here.

That’s why American government officials dismiss the real and potential harms of GMOs.

That’s why the U.S. government has long fronted for Monsanto in trade disputes and in commerce lobbying to ensure Monsanto gets maximum market penetration and profits for its products worldwide.

In 2012, a French court found Monsanto guilty of chemical poisoning of a farmer who was injured by one of the company’s herbicides.

In India, Monsanto’s marketing and patent enforcement of GMO cotton led to huge crop failures for small-scale Indian farmers, many of whom committed suicide due to loss of their farms and income.

In 1986, a federal jury in Texas found Monsanto guilty of negligence when a Monsanto employee died after being exposed to benzene at a Monsanto chemical plant.

Monsanto initially refused to pay compensation to the worker’s family.

Monsanto is linked to payment of starvation wages to agricultural laborers, especially women, and the use of child labor.

Monsanto paid more than a million dollars to workers damaged by chemicals at a Monsanto plant in West Virginia.

In 2005, Monsanto paid fines for violating the Foreign Corrupt Practices Act by making illegal payments to government officials in Indonesia.

Monsanto spends millions of dollars to block citizen-sponsored legislation that would require accurate labeling of food products so we know which foods contain GMOs.

In Maui County, Hawaii, where Monsanto tests its GMO seeds by spraying massive amounts of harmful chemicals that harm people and the environment, local citizens sponsored a successful 2014 ballot measure that bans GMOs unless scientific tests prove absolutely that GMOs are safe.

When voters approved the anti-GMO measure, the company sued to have the law overturned–it has never been implemented.

To this day, Monsanto and its allies in the GMO and poison industries are still terrorizing Maui County.

No surprise Monsanto spends a lot of money trying to sanitize its history.

It censors and manipulates the Internet, search engine results, YouTube, and other media to prevent people from finding out about its corporate crimes, affiliations, and agenda.

Monsanto has a fleet of paid sock puppet trolls and shills who post pro-GMO, pro-Monsanto comments on Internet sites.

Monsanto even hired “re-branding” experts in an attempt to make Monsanto more popular with young people.

Do I have a personal grudge against Monsanto? Hell yes I do!

It’s not just that Monsanto is a dangerous corporate criminal in bed with the DEA.

It’s that my neighbor sprayed RoundUp near my legal outdoor marijuana plants on a windy day.

Those plants were nearing harvest time and would have given me at least a pound of sticky buds per plant.

But the god damned RoundUp drifted over to my  marijuana plants and killed them.

It also killed lawn grass nearby.

And to this day, a year later, NOTHING will grow on those patches of dead lawn where the RoundUp hit.

I’ll have to dig those areas out, remove the poisoned soil, put in new soil, and replant.

Before Monsanto and Novozymes were kicked out of the Maximum Yield event, I spoke to a Monsanto scientist deeply involved with Monsanto’s “Bio-Ag Alliance” project.

The scientist reported that Monsanto and its genomic research partners have hundreds of millions of dollars, some of the world’s top scientists, and a marketing and research sector focused on total domination of all agricultural crops, including marijuana.

If things go the way Monsanto wants, the future of marijuana growing would be similar to the current reality of GMO field crop farming:

One person willing to comment about the Maximum Yield-Monsanto controversy is Michael Straumietis, founder and owner of hydroponics manufacturer Advanced Nutrients.

Straumietis says Advanced Nutrients has a 100% No-GMO policy that ensures the safety and effectiveness of all its products.

He strongly objects to Monsanto and Scotts Miracle-Grow buying into the marijuana hydroponics industry.

“Monsanto is way more concerned with profits than with long-term negative effects of their products and business practices on the environment, farmers, and citizens,” Straumietis explains.

Monsanto GMO crops and chemical products have been fast-tracked by regulators without adequate research into the long-term health and environmental effects of those products, he notes.

“Monsanto and its corporate partners such as Scotts Miracle-Gro want total capture of our hydroponics industry,” he warns. “Based on their past history, Monsanto would do buyouts of hydroponics manufacturers and distribution channels. They’ll develop marijuana growing products and market them via Home Depot.”

The end result, Straumietis worries, could be Big Ag corporate domination of hydroponics supplies, loss of grow shops, and less freedom for marijuana growers to breed their own strains.

Marijuana Flowering Phase Success Secrets
LED Grow Lights for Marijuana… The Ones You’ve Been Waiting For!