The Futurola booth at MJBizCon. This brand, originally from Amsterdam, is endorsed by Tommy Chong.
By Jack Bohannan | Published: November 20, 2017

As the doors of the Las Vegas Convention Center opened for MJBizCon 2017, the monthslong drum roll for the cannabis industry’s largest-ever trade show came to a deafening head.

Growers, investors and a variety of service providers swarmed the exhibit hall, creating traffic jams through the maze of more than 650 exhibits. We had conveyed to see, touch and discuss the latest cannabis technology and to cash in on the green rush of legalization.

The show was a veritable who’s who of industry players and an essential event for equipment manufacturers wanting to maintain mindshare in the market. All of the latest and greatest cultivation and extraction equipment was there, yet some equipment seemed to excite cultivators the most. Here’s a rundown.

The Internet of Things Comes To The Marijuana Greenhouse

At urban-gro’s display, I watched investors and growers ogle what the company touted as artificial intelligence for cannabis greenhouses. Urban-gro, the longtime provider of cultivation equipment and facility design packages, has integrated an impressive — and responsive — sensor system into its greenhouse designs.

The advancement of cultivation equipment is usually more incremental than quantum and takes place with small gains in efficiency and performance. However, sometimes those little changes lead to another paradigm altogether. Assuming the urban-gro system creates fewer problems than it solves, its intelligent web of sensors may be just such a paradigm shift.

Urban-gro’s system, the Soleil 360, incorporates hundreds of wireless detectors within the canopy to monitor — and reflexively control — environmental conditions as they occur within the microclimates of the growing space. The sensors can be located as densely as one per plant to report electrical conductivity levels, temperature, humidity, vapor pressure deficit and substrate moisture — all while monitoring the flow rate at key points of the irrigation system.

The Soleil 360 purportedly provides a better grow, lots of insight, and less foot traffic through the grow facility, with the new system of wireless sensors creating labor savings by reducing the need for crop monitoring.

“We can start firing ’em all,” a dreadlocked dude joked to a companion in a yarmulke, “Maybe me, even.”

But the urban-gro sales representative working the MJBizCon booth seemed most excited about the database, explaining that the sensors can log measurements as frequently as every 30 seconds and, by creating an avalanche of information, the Soleil 360 offers the opportunity for detailed comparison to previous crop cycles. Real-time data from the system allows cultivators to make better decisions in the moment and even helps estimate the risk of pathogen growth and plant stress.

With a full interface into existing environmental control systems, the Soleil 360 technology lays the groundwork for AI and machine learning. After analyzing hundreds of crops of particular strains, the software will likely do a better job than a master agronomist. That’s right — machine learning and big data, rather than human analysis, may drive the evolution of cannabis cultivation. 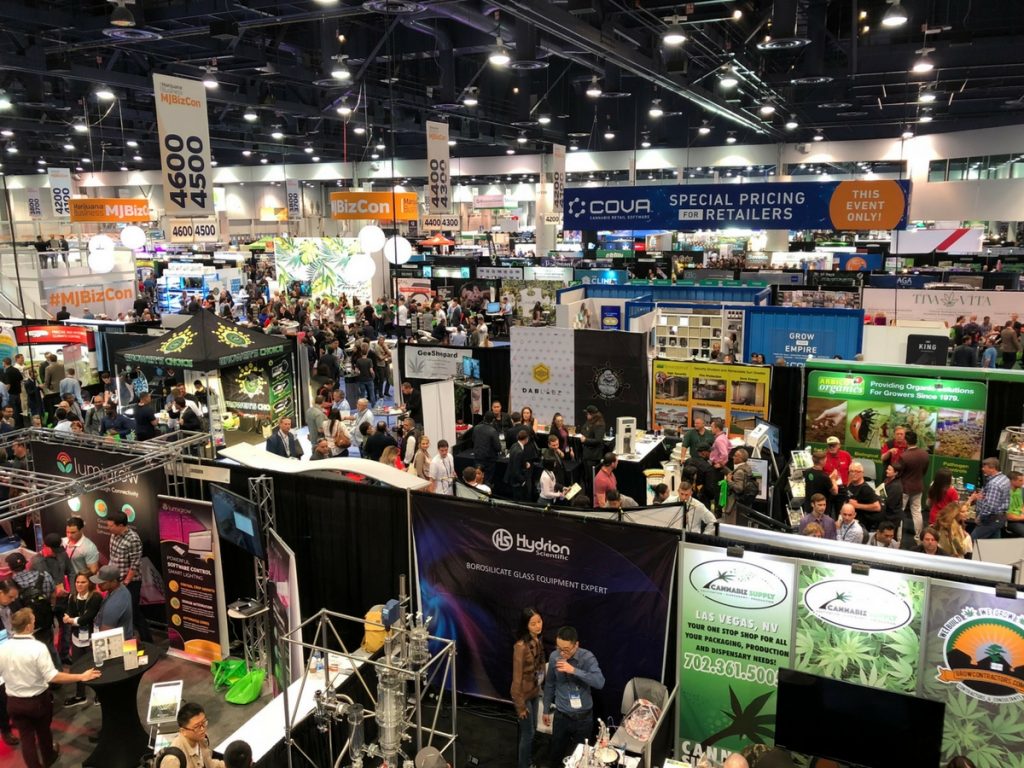 All the cannabiz action from the exhibition floor at the Las Vegas Convention Center.

Enter The Elpress Personal Hygiene System (Or Not)

The walk-through personal hygiene unit shuttles personnel into its workspace, much like cows to the slaughter. It wipes entrants’ feet with revolving, car-wash-inspired brushes and enforces some serious cleanliness before a turnstile permits entry. Employees must place and hold their hands in the hand sterilization cylinders, submitting to an automated washing regimen custom programmed to a set time and chemical process. Until employees have completed the full ordeal, the turnstile ensures they’re not going anywhere.

Sanitation machines like these find applications in plenty of other industries: food, pharmaceutical and electronics, among others. They’re not new, just new to cannabis. And though clean medicine and bona fide pharmaceutical techniques are important, they’re not the slightest bit sexy. The Elpress machine, despite its novelty value, seemed to go unappreciated by passersby.

The Futurola display was massive, sporting a 20-foot-high video monitor of young women blowing smoke rings and, in a strange juxtaposition, shots of a withered Tommy Chong doing the same.

As I stood and gawked, an older woman (dressed for a night at the yacht club) manically rushing off somewhere managed to accosted me with a solid plug for Futurola’s pre-roll packing gizmo, the Knockbox: “It’s a great machine. Saved us thousands. You should get one. Never regret it.”

Much like with the urban-gro automation system, the reduction in employee numbers is a big perk that comes with the Futurola Knockbox; labor savings no doubt compelled the woman’s hit-and-run testimonial. The kicker, though, is the machine’s consistency. I overheard another grower who described the product as easy to use, which means it’s not constantly jamming or breaking down.

The Knockbox holds 100 pre-rolled cones upright and earns its name by bouncing ground herb into them with a knocking motion. It no doubt takes some time to position the cones and remove them, but the actual deed of filling cones with herb takes just two minutes.

Futurola also displayed a shredding machine capable of prepping three pounds of bud for the Knockbox in just two seconds. I wondered how much simultaneous kefing the machine does when operating so quickly and what exactly shredding means as compared to grinding. Shredding sounds like a violent, trichrome-detaching process. And at some point, the speed bottleneck becomes the preparation necessary to fill and empty the machine. If the shredder took four times as long, the process would still be practically instantaneous. 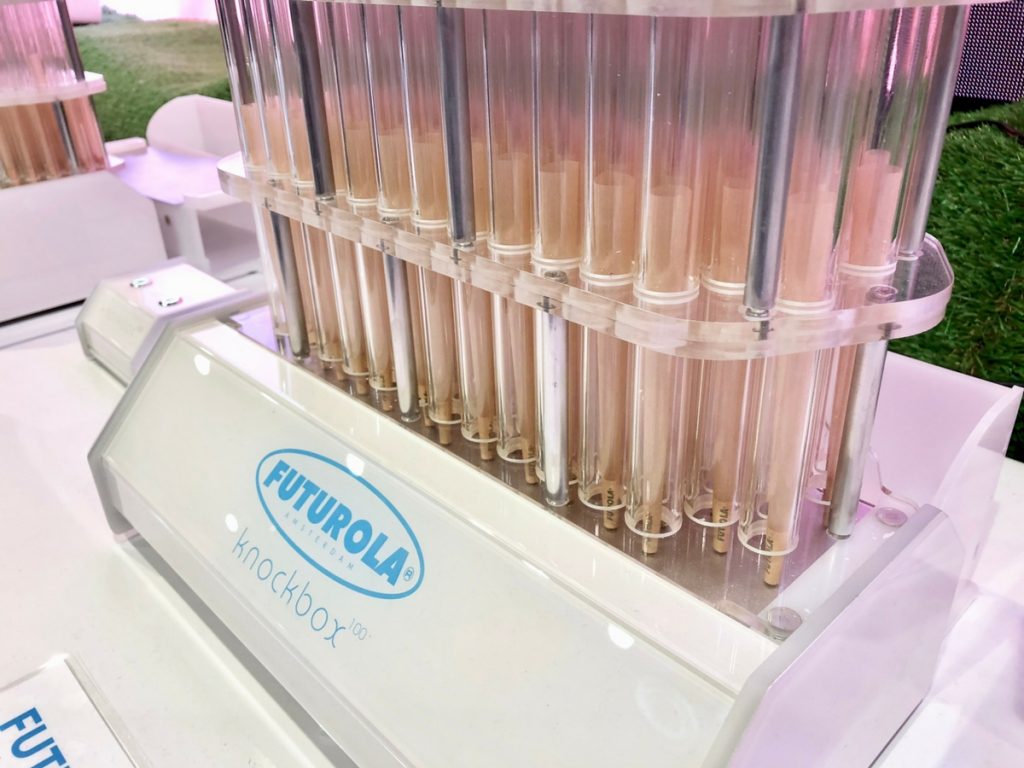 It’s difficult to imagine how putting things in bags could be cool, but the packaging equipment made by GreenBroz was actually one of the more entertaining spectacles of this year’s MJBizCon.

GreenBroz’s bud-sorting machine was downright nifty. It used a conveyor belt of diverging elastic bands to distinguish the sizes of buds based on when they dropped through the widening gaps of the moving bands. A vendor demonstrated the machine using foam Brussels sprouts. As the smaller ones dropped into the first container, and the larger ones into the second and third, I thought to myself, “Where the hell do you go to buy Styrofoam Brussels sprouts?”

Another GreenBroz machine weighed and packaged fake hops at top speed — and with a reported accuracy of just a 100th of a gram variance. The machine’s hopper filled multiple small scales with individual buds, and the system did the math, finding which buds added up to a perfect eighth ounce. It dropped them through the chute using a gentle handling method absurdly titled Airkush Technology, then conveyer-belted them into bags.

This packaging system blows the doors off any crew of chopstick-wielding employees, packaging up to 20 units per minute. In addition to speed, the unit is more accurate than the hand measurement of weary stoners, who may hurriedly load a 1.1-gram package rather than the machine’s 1.01-gram portion. GreenBroz’s machine, like so many others at the show, dramatically cuts labor, and the company reports a payoff time of as few as six months for cultivators packaging 250 pounds per month. 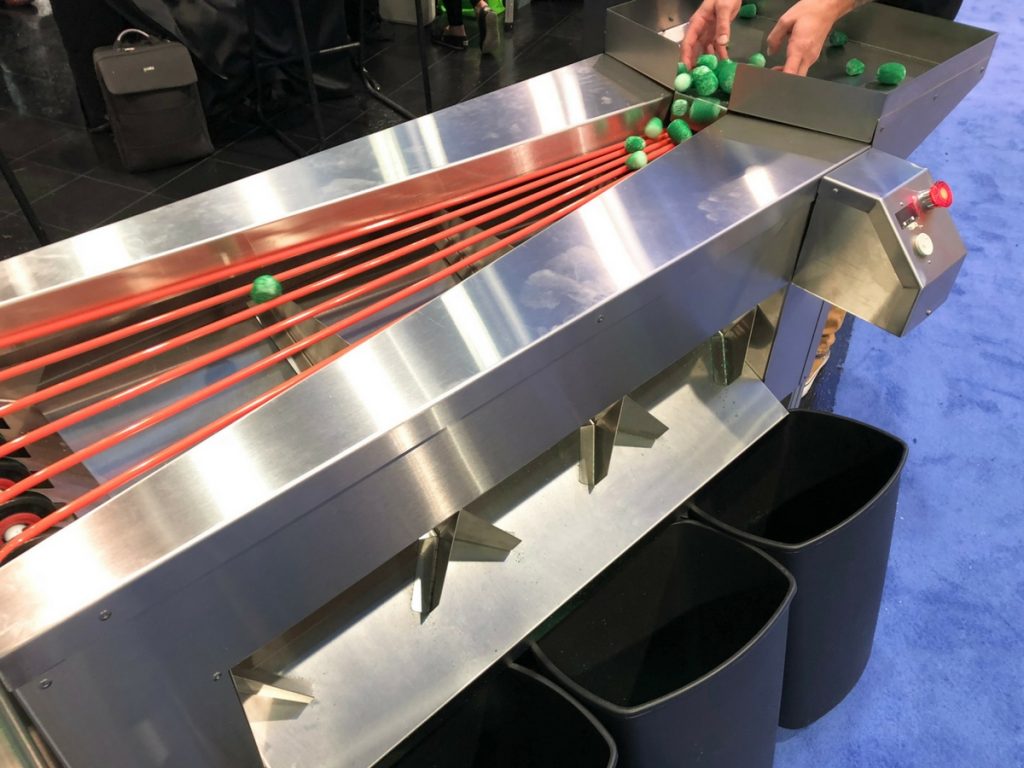 A smaller and less noticeable booth, easily overlooked in the sea of lights, sported what may become a significant technology for the cannabis industry: Mold and bacteria remediation.

The aptly named refrigerator-looking device uses reactive oxygen technology coming from the medical industry to kill mold spores and other pathogens. Though it’s little-known, doctors sometimes employ the technique to sterilize transplant organs and human tissue before surgery. A reactive oxygen — either a peroxide, superoxide or hydroxyl radical — flushes the bud and kills the mold. Then the reactive oxygen evaporates, leaving nothing but supposedly purified bud with intact trichromes and unaffected cannabinoids.

While the manufacturer confidently claims that the tech eliminates mold, the market may hesitate to adopt the tech. I purposely sought out the booth, and when I tried to explain the mold-killing device that I was trying to find, a fellow attendee responded, “Ugh, who’d want to smoke that?” I understood his sentiment.

But with increasingly stringent pathogen testing in states such as California, whole-bud remediation equipment — like that of The Box — may play a worthwhile role in maintaining the bottom line of growers.

The Box offers an additional and seemingly unrelated function: Terpene infusion. This sounded like another molestation of cannabis flower, and it made me question whether the oxygen-cleansed flower needed a flavor adjustment after treatment. But as the sales representative pointed out, oil for vaporizer pens is often infused with terpenes from citrus and lavender. Supposedly, a peppermint cloaking of marijuana flower affords patients the discretion to smoke anywhere they want. That’s always a good thing.

One Oregon-based grower summed up why cultivators attend the show:
“You gotta shake hands and see stuff in person. Anybody can put up a website. Then you get here and realize it’s a three-guy company. This is the best way to size up who you’re doing business with.”

As cannabis cultivation companies grow, strong business partnerships matter more than ever. And as the industry itself matures, we can expect trade shows like MJBizCon to do the same.

Tax Code Reform For Canna Biz Gets Backing From Colorado Sen. Cory Gardner
Train Your Brain With A Strain: How Growing Weed Kicked My ADHD To The Curb