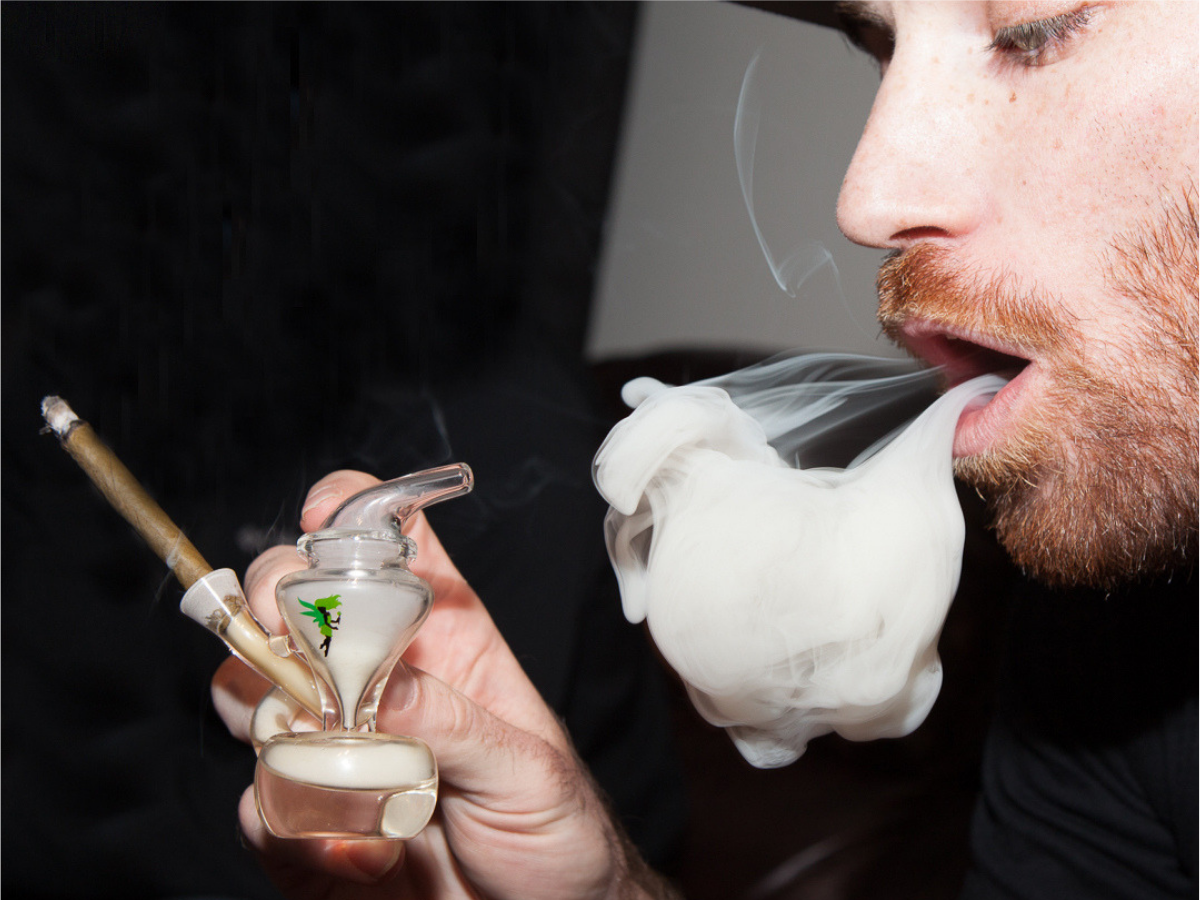 If anyone knows how to ride the wave of the cannabis revolution, it’s Josh Camitta.
The CEO of premier glassware producers MJ Arsenal invented the world’s first joint and blunt bubbler.

Branded The Martian™, when Camitta turned his idea into a reality, it swiftly became an overnight sensation, in high demand by cannabis connoisseurs the world over. So, when he says he believes we could soon be seeing smoking accessories created by the likes of some of the top fashion houses on the planet, including Chanel and Louis Vuitton, it now seems highly likely.

“I wouldn’t be surprised,” Camitta insists. “Cannabis is becoming more and more mainstream. You have a lot of countries legalizing it now and its timing [will go down in] history. We are seeing companies like Corona, they are investing fully into cannabis now. So, I think those Fortune 500-type companies, they want to buy in. And we are showing them there are real opportunities to create brands.”

Camitta prides himself on MJ Arsenal’s creative nous and ability to stay ahead of the curve. Branding his Denver-based company the “Zara or H&M of glassware,” Camitta says MJ Arsenal’s concepts can go from pad to product within 30 days. Currently selling in more than 50 countries, including China, MJ Arsenal aims to produce cannabis products that are affordable, functional and innovative.

The brand’s first accessory, the Wand bowl poker, was what first got it noticed back in 2016. But it was The Martian that propelled MJ Arsenal products to the top of most-wanted lists everywhere.

Discussing what initially sparked his interest in the cannabis market, Camitta recalls, “I had a history of anxiety disorders previously in my life, so [cannabis] has always been something that has been a non-pharma logical option for me. It has been better than any pill I was able to take or ever prescribed. I am able to function as a normal, contributing member of society now.”

However, Camitta offers that his cannabis consumption was not only for medical purposes, but also for recreation. “It has its principles and its functions on both sides, for me personally.”

Although admitting there was no one particular reason why he decided to name his bubbler The Martian, Camitta admits extraterrestrial life forms were clearly an inspiration: “I think the old [Marvin the] Martian character and another cartoon character, some alien shapes, a kind of egg shape, that was the general aesthetic [of The Martian]. In the end, my buddy said, ‘Just call it the Martian!’”

Camitta now admits this name choice was possibly a stroke of genius when it came to marketing. “In the end, the name was a very important piece as far as telling the product’s story and telling the reason why.”

The stratospheric success of this glassware caught Camitta and his team at MJ Arsenal completely unawares, as it was largely thanks to a video review on NowThis News, which ended up going viral. Called “This Tiny Bubbler Is A Game Changer,” the review was posted in March of 2017, after The Martian was launched four months prior to little fanfare.

But the NowThis News post garnered more than 10 million views in just two weeks, and soon Camitta was being hailed as a pioneer of a whole new category in cannabis glassware.

“Saying we were completely unprepared [for the attention], that is a nice way of putting it,” Camitta admits. “Our heads were spinning instantaneously. It was just a matter of, how do we play catch-up? The night the review first appeared, I remember calling our manufacturer, and we started with a modest order of I think 500 pieces, just to test the market and not go crazy.”

Now, he can laugh at his naiveté. “It was three days of consecutive calls, having to double and triple the orders. It certainly was an experience that I had not had the chance to go through previously in life. [The Martian] was a product that was again, I don’t want to say unexpected, but quickly became a popular item.”

He knew something was up when the traffic to the MJ Arsenal website went through the roof. “The video hit 15 million views and we saw our traffic spike. We were like, ‘What the hell is happening?!’”

While the popularity of The Martian device was more than welcome, it also encouraged a slew of imitators to follow suit.

Within four weeks of the NowThis News video going viral, MJ Arsenal was fending off fakes, and by August of 2017, the company was fighting more than 2,000 individual listings on wholesale brokerage sites including DHGate, Alibaba and Amazon. To add insult to injury, these cheater brands showcased pictures of Camitta, along with photos pilfered directly from MJ Arsenal’s website.

The brand was facing battles on a number of fronts in an attempt to try to secure The Martian as the first and only bubbler of its kind on the market, and Camitta soon found himself firing off a succession of cease and desist letters in a bid to stop people trying to copy his proprietary product.

When asked how he felt about people attempting to knock off The Martian, Camitta admits that the whole experience is something that still smarts.

“It feels like a kick in the stomach,” he says. “However, I have to say it is also, to a certain extent, a sincere form of flattery. But we did find ourselves in a kind of arms race to try and figure out how to protect [The Martian].”

In an effort to keep his intellectual property sacred in the cannabis space, Camitta decided to carry out a two-pronged attack. First, he applied for a utility patent, which protects the overall function and operation of a product, providing broad protection of intellectual property.

However, the patent takes between six months to a year to be fully registered.

He also applied for an ornamental design patent to protect the product’s size, shape and surface ornamentation, which covered MJ Arsenal on domestic websites.

“I was covering off the manufacturing side and the domestic side,” Camitta explains. “It was for people who were contributing and selling the product on the retail sites. So, by doing that, we were able to get these patents going rather quickly.”

The plan worked and while Camitta admits there are still people attempting to produce counterfeits, MJ Arsenal has managed to keep the integrity of The Martian intact.

“We are like the people who speak softly but carry a big stick,” Camitta says. “We are getting ready to wind up with the stick now. We are looking to make sure when people get a blunt bubbler in their hands, it’s not anything less than the concept and quality that was originally conceived.

“There are still a few people knocking us off,” he continues. “We have sent out over a hundred cease and desist letters and these people are basically saying, ‘Screw you,’ right in our face. It is a matter of, ‘We are not playing anymore.’ We tell them, ‘We are patent pending, we have got stuff coming our way, you better watch out.’ We are living in a opportunistic world, whether we like it or not, and I think that with all the benefits of world innovation and the internet, the world is getting smaller and smaller. It makes our lives much more efficient, but it also allows people who are opportunistic to take advantage much more easily.” 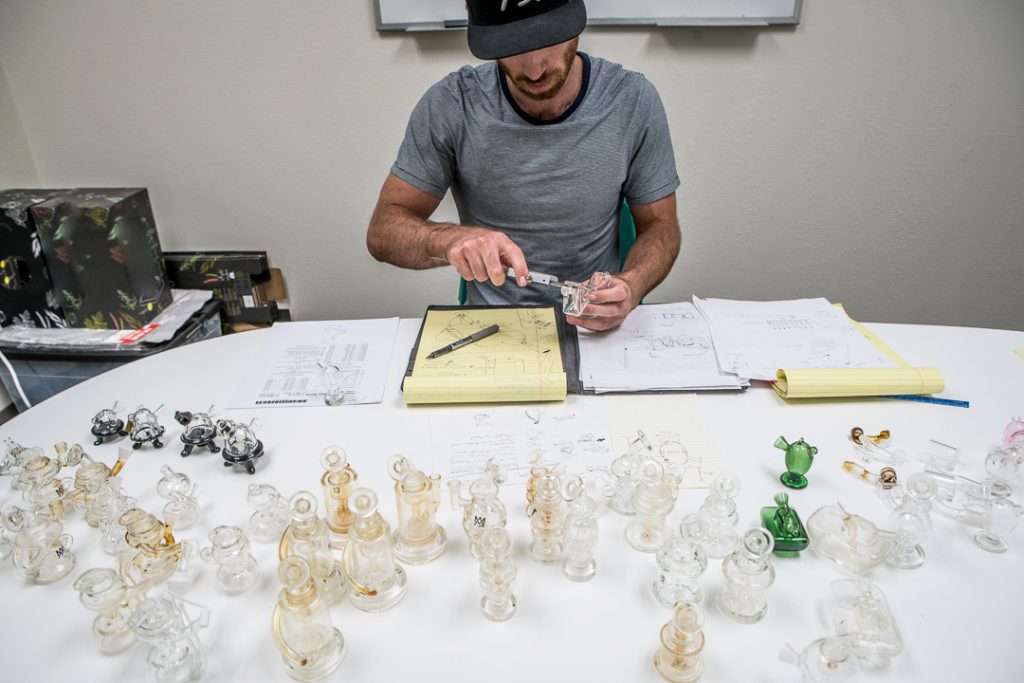 Camitta prides himself on MJ Arsenal’s creative nous. Indeed, the brand can go from pad to product within 30 days.

Camitta likens working in the ancillary cannabis accessories field as selling “the picks and axes to the gold rush.”

“It allows us to think from different perspectives, but we are consumers first and foremost. We think to ourselves, what are the things that are due for a refresh? In the ancillary space, the sky’s the limit.”

The ongoing changes in the cannabis space have certainly had an impact on MJ Arsenal and the types of customers it is now seeing. Now, it’s grandparents, parents, siblings and conservative types who are interested in purchasing its range of products to boost their consumption methods.

And as someone who broke the mold, Camitta sees the lascivious interest of big corporations to try to get a slice of the green pie as a necessary evil to making cannabis more acceptable to the wider community.

“One of the biggest barriers is the banking system,” he elaborates. “If we could get [financial institutions] involved — they are the biggest barrier stopping this industry become mainstream. I think we need to see this market grow. Until the market in the US gets to $30 to $50 billion as a whole, you won’t see people incentivized.”

All the same, Camitta acknowledges that there will be people and businesses that will suffer as a result of the cannabis industry going mainstream. “There will be people who will get burned with that happening, regardless. That could be the growers. Cannabis growing isn’t easy. You are working with a commodity. You are at the will of the market, when it becomes an economy of scale, when you have that major brand, which is a cheap and reliable choice.”

As a caveat, Camitta adds, “But if you relate [cannabis] to the wine markets, I see it being like better vineyards in the world having certain vintages. [For that reason] I think there is huge opportunity for the artisan side [of cannabis cultivation] to explode.”

Nonetheless, he says that while he doesn’t think it will ever be possible for cannabis to be truly mainstream, it could feasibly tread a line. “Booze treads a finer line at this point. Maybe cannabis is somewhere in the middle,” Camitta says. “There will be ways we can market ourselves, but I don’t think it will ever be the quote-unquote standard way. My opinion is, you shouldn’t advertise patient-doctor products without the medical dynamic. And when it comes to recreational use, if I had young children, I wouldn’t be anti, but I wouldn’t want them to be influenced [to try cannabis] one way or the other.”

MJ Arsenal continues to innovate, using flash sales and targeting releases of new products to coincide with calendar events. For example, it has a limited-edition bubbler coming out in time for Halloween called the Blunt-O-Lantern, which is shaped like a jack-’o-lantern.

And in the spirit of giving back to the cannabis community, Camitta is more than happy to offer tips to anyone wanting to dip their toe in the cannabis water for the first time. His primary piece of advice? “You should know the product in terms of cannabis. In order to develop a product in this space, you need to know what it’s for and how it’s used. There is no perfect product or company. After everything I have learned, the main thing is, you don’t give up.

“I don’t want to sound corny, but it’s true,” he finishes. “Whether you touch the plant or not, you will face roadblocks. But that is going to stick in your skin and it will make you the best entrepreneur. If you can make it in the cannabis space, every other field will be a piece of cake.”

Simply Silica: How Adding Silica To Your Grow Op Will Help You Cultivate Bigger, Better Buds
Financial Planting: Are Insurers Finally Coming Around To The Cannabis Community?