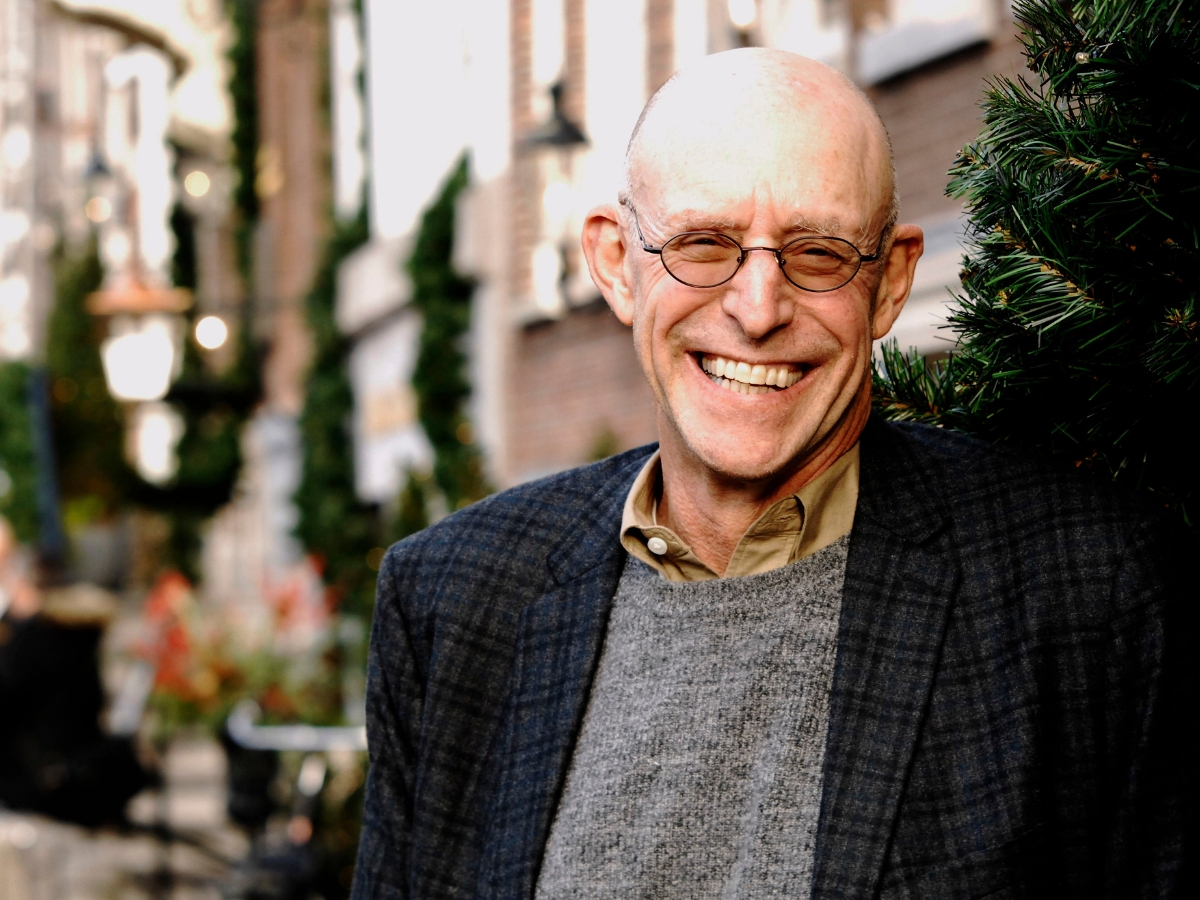 Bestselling author Michael Pollan recently visited Amsterdam to promote How to Change Your Mind, his latest book about the psychedelic renaissance in the United States. Big Buds sat down with Pollan to talk about the book, cannabis and the politics behind the drug war.

Michael Pollan, one of Time magazine’s 100 most influential people in the world in 2010, is the author of eight books, including The Botany of Desire, The Omnivore’s Dilemma and Food Rules. In The Botany of Desire, which was made into a fascinating documentary, Pollan tells the story of four plants by connecting them to human desires: the apple for sweetness, the tulip for beauty, the potato for control, and the cannabis plant for intoxication. Even for those who are knowledgeable about cannabis, his portrayal of the plant is a great read. Throughout the book, Pollan makes the point that although we might see ourselves as the ones using these plants, they are really using us:

In the same way the human desire for beauty and sweetness introduced into the world a new survival strategy for the plants that could gratify it, the human hunger for transcendence created new opportunities for another group of plants. No entheogenic plant or fungus ever set out to make molecules for the express purpose of inspiring visions in humans — combating pests is the far more likely motive. But the moment humans discovered what these molecules could do for them, this wholly inadvertent magic, the plants that made them suddenly had a brilliant new way to prosper. And from that moment on this is exactly what the plants with the strongest magic did.

Last December, Pollan gave two lectures in the Netherlands about his latest book How to Change Your Mind: What the New Science of Psychedelics Teaches Us About Consciousness, Dying, Addiction, Depression, and Transcendence. He spoke candidly about his own experiences with LSD, psilocybin — the active ingredient in magic mushrooms — and DMT. When he began writing the book, Pollan had no intention of using any of these substances. Rather, he just wanted to document the history of psychedelics, with an emphasis on the wave of new research in the US. He writes in the prologue:

Although it didn’t start out that way, it is a very personal as well as public history. Perhaps this was inevitable. Everything I was learning about the third-person history of psychedelic research made me want to explore this novel landscape of the mind in the first person, too — to see how the changes in consciousness these molecules wrought actually feel and what, if anything, they had to teach me about my mind and might contribute to my life.

When he walks into the Ambassade Hotel on one of Amsterdam’s most beautiful canals, Pollan, 63, apologizes for being 10 minutes late. A VICE camera crew took him to a so-called smart shop, a store that sells psychedelic truffles and other legal, mind-altering substances. We sit down in a quiet corner of the hotel lobby, surrounded by paintings and drawings by artists of the CoBrA avant-garde art movement, like we were in a tiny private museum.

“I was really struck by the fact that both in Utrecht and Amsterdam, a very high percentage of the people in the audience had had psychedelic experiences,” Pollan says about his lectures. “Judging from the hands that went up, I’d say about 80 percent. Pretty much everybody except my editor, it seemed. So, there’s a very experienced audience here, more than in the US.”

American audiences have a greater interest than the Dutch in the medical applications of psychedelics, Pollan claims. He explains that most of the current research is done on psilocybin.

“Researchers in the US are not using LSD, because it has such a bad reputation,” Pollan says. “It also takes longer, up to 10 hours. The researchers want to get home on time for dinner, you know? Psilocybin works for two to six hours, so it’s more practical. And most people haven’t heard about it, so there’s no stigma.” 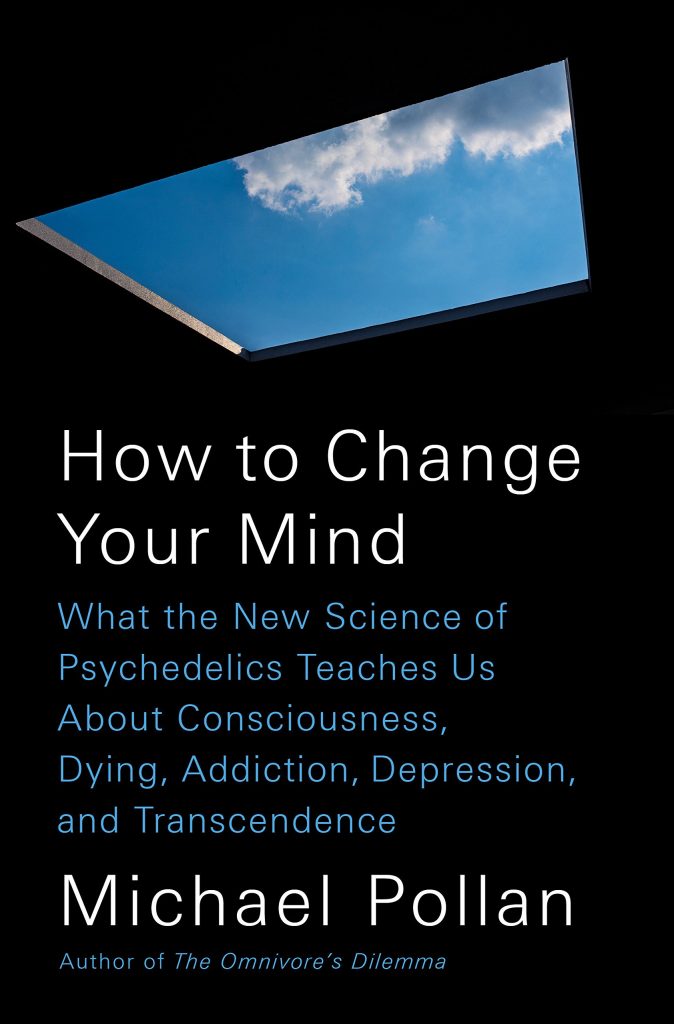 A front-page story in The New York Times in the spring of 2010, titled Hallucinogens Have Doctors Tuning In Again, was the seed from which Pollan’s latest book grew. The article reported on experiments at two American universities, whereby large doses of psilocybin were given to terminal cancer patients as a way to help them deal with the existential distress on the approach of death. His initial reaction was that the last thing he would do when faced with a terminal diagnosis is take a psychedelic drug. But the results were spectacular. He writes in How to Change Your Mind:

Many of the volunteers reported that over the course of a single guided psychedelic ‘journey’ they reconceived how they viewed their cancer and the prospect of dying. Several of them said they had lost their fear of death completely.

When I ask him about nonmedical use of psychedelics, Pollan says that “nonmedical use should have a place in society. These experiences are valuable for a lot of people. We’re not all terminal cancer patients, but we’re all terminal. We may not be clinically depressed, but we do feel depressed every now and then. We’re all stuck in destructive thought patterns or patterns of behavior. So, I think this is a very important cultural project.

“We have a medical context, we have a religious context, and both are just as valuable,” he continues. “But we need a third context, a betterment for healthy people, as someone I quoted in my book said. Mental health clubs, maybe? Having someone to guide you is very useful. But who am I to say that you can’t do it on your own? I’ve had good experiences without a guide as well.”

One thing he is sure of: “I don’t think it should be criminalized.”

On the subject of psychedelics, does he think cannabis should be included in that classification? “I understand phenomenologically why you would classify cannabis as a mild psychedelic, but you can draw a line around LSD, DMT and psilocybin to be considered a class by themselves.

“If I have it at a party, I dissolve into a lump on the couch,” he continues. “I’m not very communicative on cannabis. I prefer the good old days of bad pot. I’m very susceptible to drugs in general.”

Pollan is surprised when I show him my Dutch copy of The Botany of Desire, not even knowing there was a Dutch translation, but said he likes the cover. Whereas the US version only features an apple, the Dutch one has all four plants, including a large cannabis leaf. “The leaf is beautiful,” he says. “I could grow it for the leaf.” Pollan did in fact grow cannabis once in 1982, using seeds his sister’s boyfriend picked out of “some really amazing Maui.”

Pollan humorously chronicles a portion of his small cannabis enterprise in The Botany of Desire, but a particularly poignant paragraph about marijuana and the American drug war is more appropriate for this conversation:

Historians of the future will decide for themselves exactly why marijuana, of all drugs, should have become the focus of the American drug war — why the bright line of prohibition was drawn around this particular plant, rather than coca or poppies. Did marijuana pose a grave threat to public health, or was marijuana the only illicit drug in wide enough use to justify waging so ambitious a war in the first place? … Whatever the reason, by the end of the 20th century this plant and its taboo had appreciably changed American life not once, but twice: the first time rather mildly, with marijuana’s widespread popularity in the ’60s, and then again, perhaps more profoundly, in its role as casus belli in the war against drugs.

Pollan is first and foremost a lover of plants — a love that runs through all of his books. “I do feel you should be able to grow what you want in your garden,” he says. “It’s your garden, you know? I grew castor beans in my garden. They contain ricin, which is used in chemical warfare. I grew opium poppies in my garden. Oddly enough, the most popular article on my website by far is Opium Made Easy, a piece I did for Harper’s [Magazine] back in 1997.”

Around the time of that article, Pollan traveled to the Netherlands to research the cannabis chapter in The Botany of Desire. “It was my first visit to Amsterdam,” he recalls. “I came here to see the state-of-the-art growing of cannabis and also because I could interview the growers here. This is one of the great horticultural nations of the world, of course. I went to the grow shops and coffee shops and visited the High Times Cannabis Cup. For the documentary, we also shot at the huge flower and vegetable auction in Aalsmeer and the botanical gardens in Amsterdam.”

Pollan paints a vivid and insightful picture of the cannabis scene in Amsterdam in that era: “To a marijuana grower, Amsterdam in the 1990s was something like what Paris in the 1920s was for a writer: A place where alienated expatriates could go to practice their craft in peace and hook up with a community of kindred souls. … Beginning in the late 1980s, as the United States escalated its campaign against marijuana, American refugees from the drug war began moving to Amsterdam. Growers took with them their seeds and expertise, and this migration, matched with a Dutch genius for horticulture going back to the tulip craze, made Amsterdam, once again, the place to go if you cared deeply about one particular plant.”

How times have changed. The US and Canada are now leading the charge in legalizing cannabis, with the Netherlands lagging behind. Inevitably, our conversation turns to the question of why governments ban certain drugs, a subject Pollan has written about extensively.

“I think the US government, at least in the ’60s and ’70s, was very concerned about people changing their mind,” he says. “Boys weren’t going to [the] Vietnam [War], that never happened before. Nixon was convinced cannabis and psychedelics made people question their assumptions and their leaders. The government felt threatened.

“I think the more important issue is power,” he continues. “If you look at the height of the drug war, it was between the collapse of the Soviet Union in 1989 and 9/11. There was no enemy in that period. So, how do you justify curbing civil liberties and throwing black men in jail? The drug war gives you that power. One of the reasons the drug war lost steam is that there was the war on terror.

“John Ehrlichman [one of Nixon’s top advisors] gave an interview to Harper’s Magazine a few years ago in which he explained it. He knew there was a lot of pot in the inner cities and it justified police presence there. It splintered the counterculture by arresting people for drugs. I think the drug war is about politics. What also plays a role is the opiates crisis — a crisis because of legal drugs, where pharmaceutical companies convinced and even bribed doctors. No wonder people got addicted to OxyContin, which they marketed as non-addictive. That kind of screws up the narrative of the war on drugs being about illicit drugs.”

Legal cannabis is a winning issue now, Pollan says, “even for presidential candidates. Things are definitely changing around cannabis. And the changes, both with cannabis and psychedelics, are driven by the medical use. It changed the image. I’d say there is now more research about psychedelics than about cannabis. The government made it more difficult to study cannabis.”