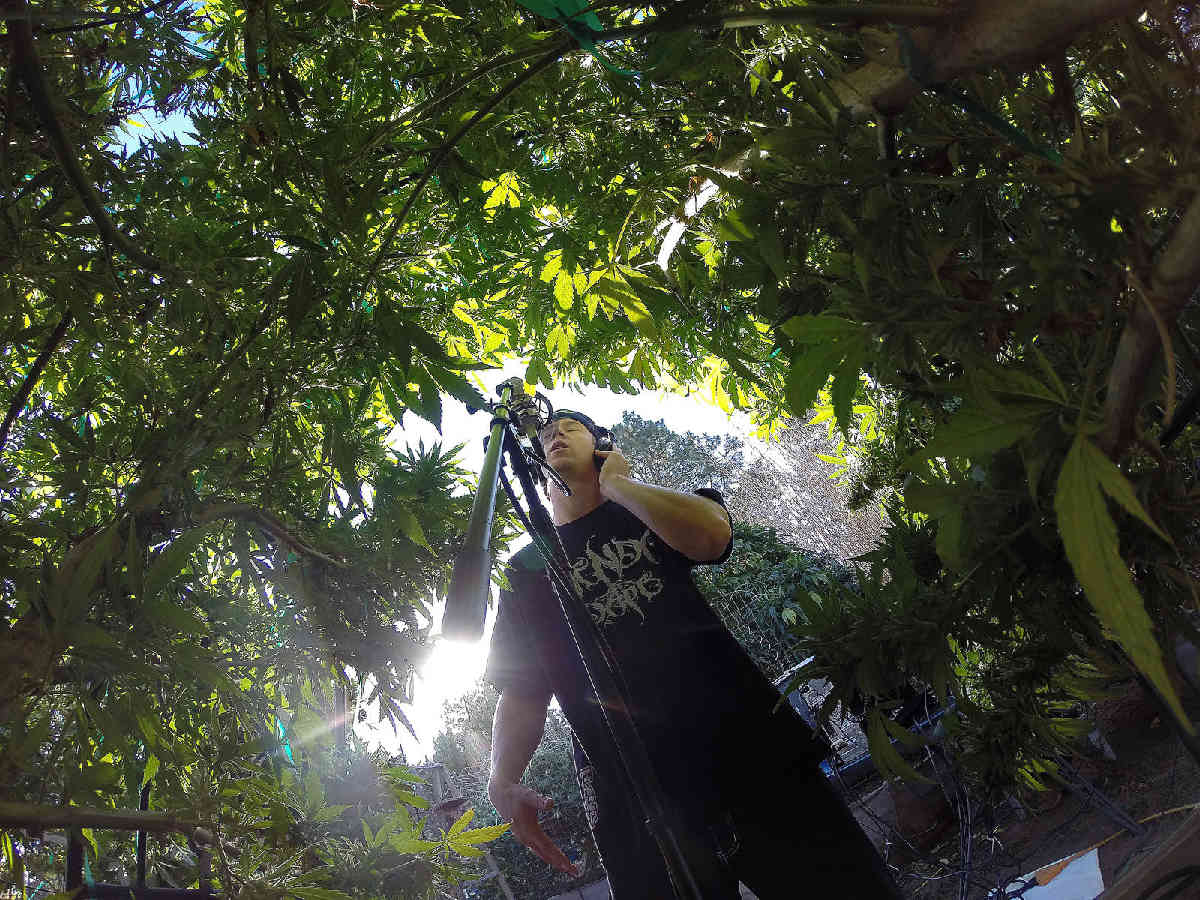 Mendo Dope is the only musical act that records its albums inside a gigantic marijuana plant they grew themselves!
© Copyright, Mendo Dope, 2017
By Steve Davis | Published: October 9, 2017

But the truly amazing thing? The Mendo Dope boys have managed to get their name out there and continue to produce cannabis and beats, despite a heartbreaking raid by the Mendocino County Sheriff’s Office and Campaign Against Marijuana Planting (C.A.M.P) officers in October, 2013.

Just as they were getting ready for that year’s harvest, the brothers were swarmed by cops who were apparently told by a snitch that the two had guns and as many as 300 cannabis plants on their property.

According to a post on their Facebook page at the time, the brothers had “25 [plants] and the new limit is 6.”

While 25 plants was generally believed to be a legal number in Mendocino County back then, a little-known measure passed in 2008 had reduced that number to six.

When the police raided Mendo Dope’s home, they saw how big the plants were, calculated the massive yield that would potentially come from them, assumed the young men were drug dealers, handcuffed them to a wheelbarrow, destroyed the entire garden by putting it through a woodchipper, and removed all the money they had in the house.

“They left us with nothing,” Old E later told CelebStoner.com. “We did not get charged, but had a meeting a few months later with our lawyer and the District Attorney of Mendocino County, who told us that we were ‘too good of farmers,’ and dropped the case with no charges.”

The defiant brothers took the high road, releasing a video and song about the raid — and kept on growing. Check out the YouTube clip below for their song “The Raid.”

As self-taught musicians and lyricists who started making recordings at home in 2007, Mendo Dope is the only prominent musical act that accurately chronicles the sweat, grit, determination, sore muscles, expertise, skills, risks and successes of marijuana growers.

Most cannabis-focused musicians, such as Snoop Dogg and Wiz Khalifa, wax lyrical only about the pleasures of getting high. In contrast, Mendo Dope’s songs are more focused on the marijuana grower’s daily grind.

Their rise to prominence began when they started working with established hip-hop artists and producers including DJ Ignite, K-Lou and Winstrong.

Marijuana and music have long been intertwined, but Mendo Dope has added cannabis cultivation into the creative mix.

The boys proudly admit to always getting high before they write and record songs. They inhale their own fine, connoisseur outdoor bud, then they write lyrics by hand, filling notepad after notepad with their prose.

And Mendo Dope’s originality is certainly distinct. Their song “Fiskarz” is told from the perspective of a pair of marijuana trimming scissors:

“I’m heading out to the next crop, still got resin on me from the last one.”

That’s not an angle you hear every day.

The songs are often as detailed as a short story, and they’re autobiographical, too. For example, pheno hunting led Mendo Dope to an exquisite, pink-haired version of Subcool’s legendary Locomotion strain.

“We crossed a luscious phenotype we call Pink Hair Loco with Subcool’s Querkle to create our very first cannabis strain, which we’re calling Mendo Dope,” Old E says. “It’s in testing right now, and Subcool is planning to officially release the cross as a TGA strain later this year. This is an absolutely killer strain, with seductive smell, heavy high, and sweet, pink coloring.” 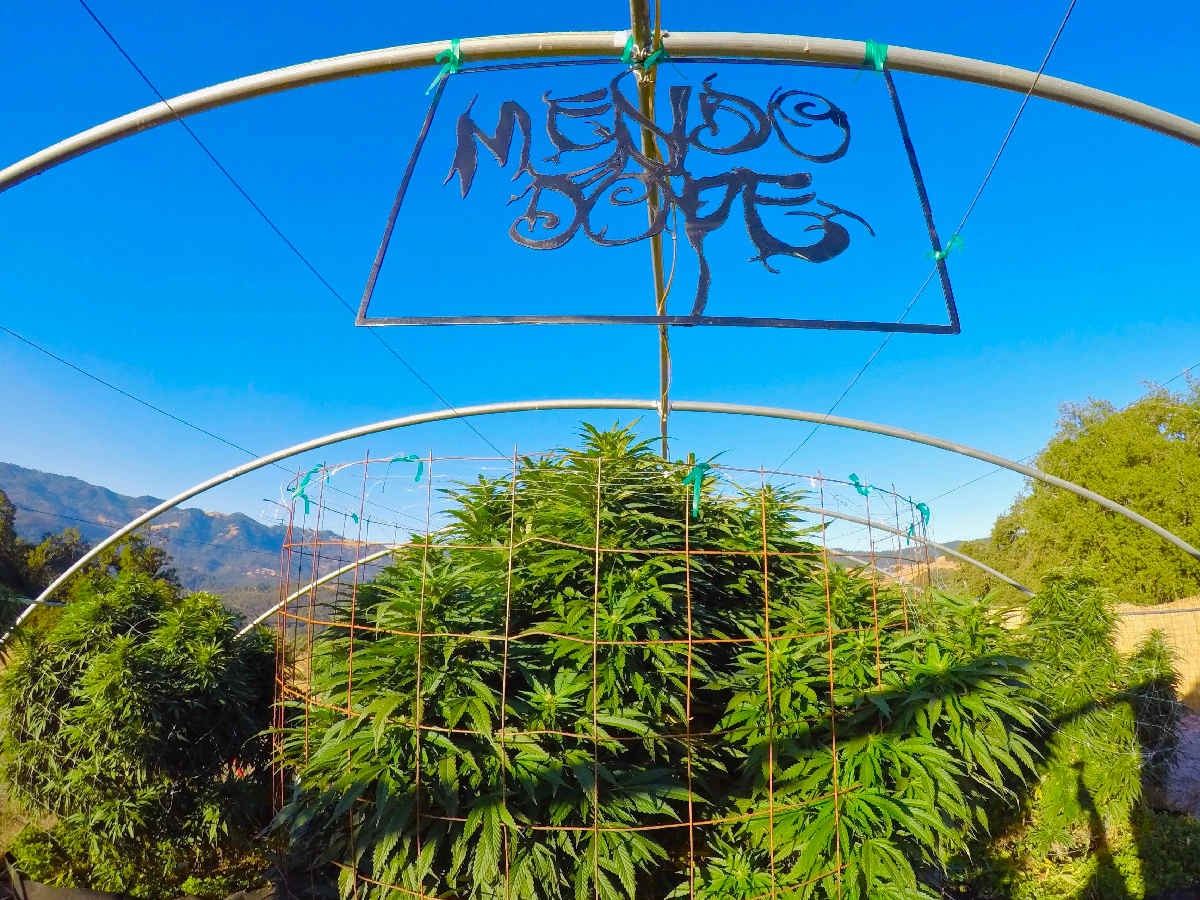 “We engineered an enormous ganja plant that we trained and shaped specifically so it would function as a recording booth,” Old E says. “We released our Live in the Garden album in 2016, with every sound and vocal recorded outdoors. It was so fun that we made another album that we released this year, called Live in the Garden Season Two, with the highly respected legends of reggae Mykal Rose and Pato Banton.

“At the same time, we formed a live band so we could go out on the road and make songs in our garden live. We’re blessed to have Trevor Lyon, Mr. Blap and Johnny Fingaz working with us live.”

The live band was put through its paces in September, 2017 when they performed at the annual Boston Freedom Rally, the East Coast’s largest pro-legalization cannabis activist gathering. This year, an estimated 60,000 people showed up.

Mendo Dope’s set was greeted with ecstatic dancing and applause, with the crowd moving in unison, holding joints, vaporizers, and bongs aloft, singing along with the chorus of “Weed Nerd.”

While being known primarily for their musical output, Mendo Dope has gained popularity as pioneers of high-yield outdoor marijuana growing techniques.

The brothers’ how-to cannabis cultivation video series features the biggest marijuana gardens most of us will ever lay eyes on. Their videos utilize time-shifting, fisheye lenses, fast motion and stop motion to show the entire life cycle of plants, and the arduous process of harvesting plants that are wider than a car and taller than an NBA player.

There’s also a six-hour YouTube cultivation special that’s a total tutorial for anyone who wants to get six pounds or more per plant outdoors, plus a more digestible video clip called “How to Grow” that explains every step needed to go from seed to harvest and end up with a mountain of buds.

The song is a teaser culled from their three-disc DVD How to Grow that provides step-by-step instructions on growing outdoors for maximum yield.

The hallmarks of the Mendo Dope growing paradigm include:

Old E says Mendo Dope music is now available to stream on Pandora, and he and his brother are stoked about their successful 2017 outdoor marijuana season and skyrocketing popularity as both musicians and growers.

And The Best Supporting Method Goes To… Screen of Green, For Its Starring Role In Marijuana Gardens Everywhere!
A Mighty Fight: Stop Spider Mites, Russet Mites And Broad Mites On Marijuana Plants Before They Become A Problem