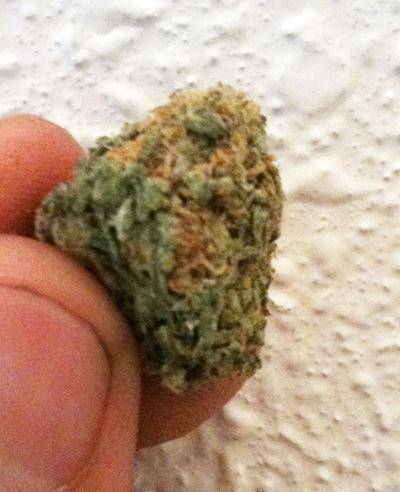 The GDP strain of Medical Marijuana is typically a cross of Purple Urkle x Big Bud. This particular batch was very weak in appearance and smell upon first look, but given the price and going on a personal recommendation, I decided to give it a test go.

Upon taking it home and breaking it up, I did get the faint whiff of that signature GDP smell. I do not call it “grape” because in reality, it smells nothing like a grape. The aroma can really only be described as purple. A true GDP will stink like purple. As weird as that sounds I’m serious. Come down to Los Angeles and go to a higher-end collectives with GDP and just smell the jar. Purple literally exploded inside.

Getting back to the particular batch, it nudges were mostly small and condensed, with a slight hint of purple that showed some signs of promise. Further examination under a microscope revealed almost fully formed trichs coating the dense landscape.

Normally GDP is a 60% couch lock medication according to the level or grade of batch your getting. This batch however wasn’t wasn’t so severe, but was more of a relaxing Indica—very good for stress and relaxation. Also recommended as a nighttime smoke for those with mild insomnia issues.