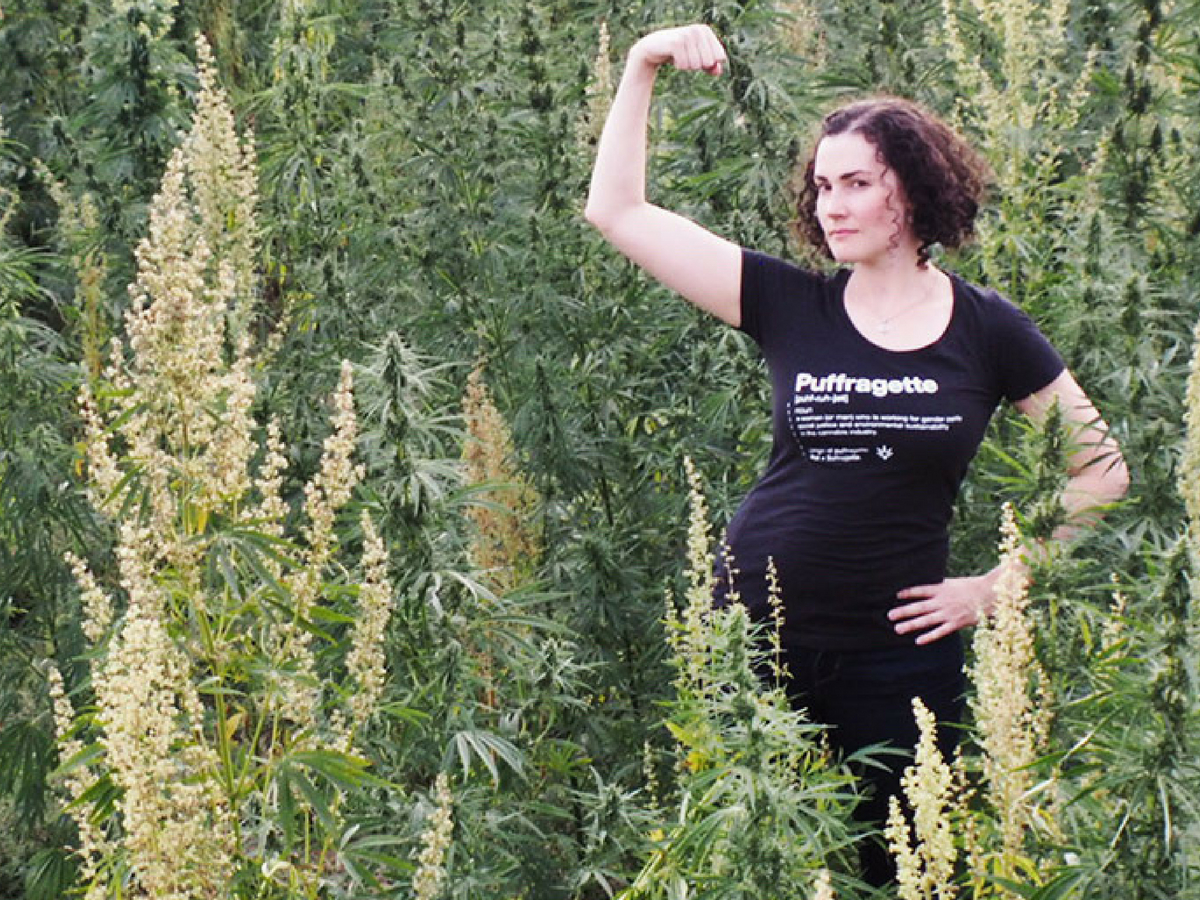 Puffragette [puff-ruh-jet]:
A woman (or man) who is working for gender parity, social justice and environmental sustainability in the cannabis industry.

Nowadays, we have access to a plethora of classic stoner movies, right at the flick of a button: Pineapple Express, Dazed and Confused, The Big Lebowski, Harold & Kumar Go to White Castle, Harold & Kumar Escape From Guantanamo Bay — the list goes on.

In this era of video streaming, there are now also tons of cannabis-oriented documentaries popping up, including 2015’s Rolling Papers and Super High Me back in 2008, to name a few. While these titles continue our cultural canon, they don’t always reach audiences who don’t consume cannabis. However, one filmmaker is flipping the stoner movie narrative with a new feature film, titled Mary Janes: The Women of Weed.

When Windy Borman first moved to Colorado a few years ago, right as recreational legalization went into effect, she learned that, according to Marijuana Business Daily, 36 percent of the industry’s leaders were women. It was in this moment that she felt challenged to reconsider her perceptions of the plant.

You see, prior to making the documentary, Borman — a multi-award-winning filmmaker who produced and directed The Eyes of Thailand and produced The Picture: Rethinking Dyslexia — had never even tried cannabis.

But this naiveté proved no deterrent when it came to the canna virgin making her movie.

Mary Janes jumps head-first into the “Puffragette” movement of women paving the way in the cannabis industry, from musician Melissa Etheridge and Massachusetts Commissioner Shaleen Title, to Women Grow co-founder Jazmin Hupp, evolutionary biologist Dr. Daniela Vergara, and many more. In the documentary, Borman explores how the so-called green revolution impacts the environment, the war on drugs, the prison-industrial complex, and Big Pharma.

Big Buds Magazine chatted with Borman about her cannabis-centric documentary and what she has next on the filmmaking horizon.

Big Buds Magazine: What was the motivation and inspiration for the film?

Windy Borman: I moved to Colorado in 2014, right when the adult use of cannabis became legal and regulated, but I was not a cannabis user. When I finally heard that statistic in 2015 — that [over] 30 percent of leadership in the cannabis industry are women — that was intriguing to me because the national average at that point was 22 percent. I was interested to figure out why cannabis was attracting more female leadership, so I started talking to as many people as I could. I realized that even if I was not a cannabis user, I had an access point to help try to tell the story of the women who work building corporate responsibility into this new industry. I eventually interviewed 40 women on camera from 10 different states and we put that all together into the film.

BBM: How long did it take you from start to finish — from this idea first popping into your head to the final stages of the film coming together?

WB: I started doing preliminary research and phone interviews and things like that in 2015. We did the majority of our filmmaking in 2016. We started at the Women Grow Summit that February and we wrapped on election night.

We actually had a very different story in mind when we started filming. We thought we were going to have the first female-led industry, the first female president, this is a girl power movie, the sky’s the limit. And when that didn’t happen on election night, we had to go back to the drawing board. That’s why we ended up structuring it around those three core values: gender parity, social justice and environmental sustainability, relating each of the segments to the [cannabis] industry.

BBM: What was your favorite memory of making the film?

WB: I have two favorite moments. The first was when I realized that dogma I had forged from “Just Say No”/D.A.R.E. generation’s propaganda was shaking off — that moment where I’m like, “[This information] sounds like this is a conspiracy.” In a lot of ways, I think that was life changing, right? Because you hear all these stories, these studies, these articles. You talk to people. I really started to see the racist roots of the drug war. That’s when I was like, “I get it.” So that was one of my favorite moments.

And then my other [favorite memory] was, of course, when we put that cannabis group of fairy godmothers [in the film] to guide me on my first ever cannabis consumption experience.

BBM: Just from watching it, that experience seemed like it was a lot of fun.

WB: It’s also great to stand in the back of the theater when audiences are watching that [scene] because they just love it, you know? People are like, “She’s getting it, yes!” And then by the end of the film, everybody is just having a great time watching me consume for the first time.

A lot of people, especially women, come up to me afterwards and they’re sharing, “I’m finally going to take my mom into a dispensary [to buy] cannabis for her arthritis,” or “I’m finally going to go in and see how I can use it to treat this,” or, “I now feel like I have enough information so I can have a conversation with my family member or a partner about how we can use cannabis to get off of a big pharmaceutical.” So, it’s been really enlightening and empowering for people who maybe haven’t been cannabis users ever, or maybe not for a very long time, but it’s helping to set their comfort level with the plant, so they can have this conversation. That’s wonderful when your film is … more than just a film experience, with [it] actually carrying over into people’s daily lives.

BBM: Do you have any other projects you’re working on right now?

WB: We’re working on … [turning] the documentary into a docuseries. There are enough women in the US and abroad who are leading cannabis. I would really like to keep filming them and keep having this conversation. There are so many more people and so many more topics that we want to cover that we just couldn’t get in a 90-minute film. Having 12 episodes each season will really enable us to do a deeper dive into this, and that way we can keep highlighting the women who are building corporate responsibility into the industry.

It’s been really wonderful recently that the film has started to garner film festival awards. Not only is this a crowd-pleasing film, but we’re also starting to be recognized in the film circuit as it is a great film. Whether somebody is from cannabis or [is] pro women, even just looking at it as a film, is it a good documentary? Yes — and that’s a wonderful honor as a filmmaker to say the audience likes it, the critics like it. It means we’re onto something that’s helping open doors for some of these distribution conversations we’re having now. Initially, people said, “It sounds like it’s just another stoner film.” Well, it’s not, actually. We’re trying to have this big conversation and that’s resonating with people now. We can now have the conversation [of turning this project] into a series.

To stay informed about the release of ‘Mary Jane: The Women of Weed,’ or for screenings in your area, sign up for the film’s newsletter. Plus, check out the official trailer below.