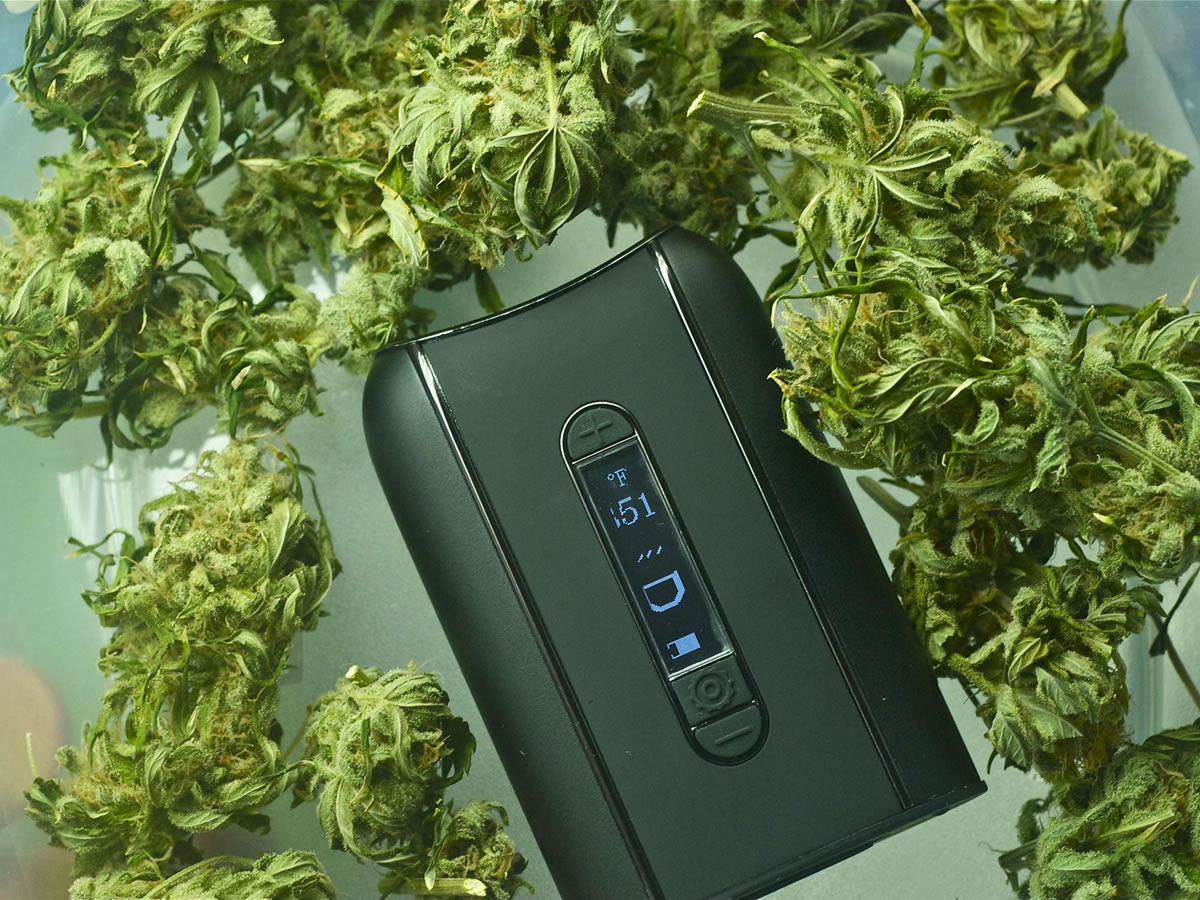 Vaporizers are a marijuana inhalation tool that protect your lungs, but here’s a little-known secret: you can use vaporizers to control the types and ratios of marijuana compounds you inhale.

This means you can achieve different medical and/or recreational effects from the same marijuana. Here’s how it works…

The cannabinoids most of us have heard of are THC, CBD, and CBN.

But there are dozens of other compounds in marijuana that interact with each other and cannabinoids to affect your high and marijuana’s medical effects.

Using the chart included with this article, along with a precision marijuana vaporizer, you can choose target cannabinoids and other compounds to inhale via vaporization.

These include flavonoids and terpenoids that give different scents and tastes to different marijuana strains. 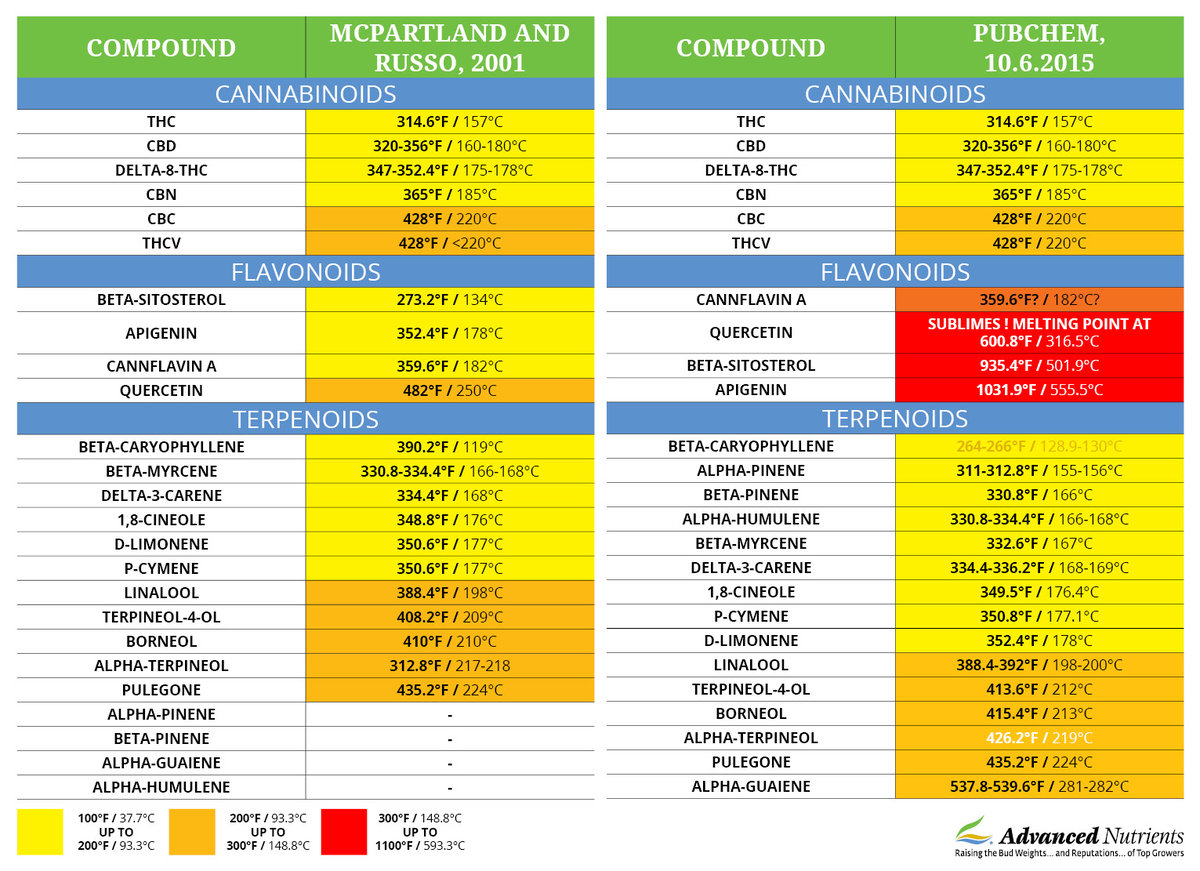 Flavonoids are more than just tasty or sweet-smelling.

Many of them (such as cannaflavin, apigenin, best-sitosterol, and quercitin) have specific medical effects and also may subtly affect your high.

Terpenoids contribute to the aromatic qualities we love in our marijuana, and as with cannabinoids and flavonoids, they also have their own medicinal and psychoactive properties.

Our chart shows you temperatures at which marijuana compounds begin to boil or vaporize.

Please note there are scientific disagreements about the precision of these temperatures, so you should take them as a guide, not as an absolute lock.

Note also there’s a continuum interaction of temperature, type of vaporizer, and marijuana compounds that affect the precise amounts of vaporized compounds you inhale.

CBN and CBD have medical marijuana benefits, but for most marijuana users they produce unpleasant sedation, heaviness, mental fog, and other downer effects that rob us of THC’s euphoria and stimulation.

Using a precision marijuana vaporizer, however, you can avoid inhaling CBD and CBN so you get an almost-pure THC high from any strain of marijuana, no matter what the cannabinoid percentages and ratios are, if that’s the kind of high you want.

When you’re smoking whole marijuana, you have no control over your inhaled cannabinoid ratios and percentages. You get what the smoke gives you, including harmful tars and toxins.

But when you have a precision marijuana vaporizer, you can set the temperature so it only vaporizes THC.

So no matter what marijuana strain you have, if you only want to experience THC effects, you dial 315-320F. Then you only get vaporized THC, and you avoid CBD and CBN completely.

If you smoke marijuana with low THC percentages, and especially if the low THC is coupled with higher than average CBD/CBN, your high is not going to be so high, and you have to smoke more of it to get high at all.

Not only that, but the more of that cannabis you smoke, the more CBD, CBN, carbon monoxide, and toxic compounds you get…and these tend to negatively color your high.

With a vaporizer, you dial in the temperature for THC and all you inhale is THC. Whatever THC is in that marijuana is what you get.

An important fact is that the beginnings of combustion, along with degradation of THC, begins to take place when vaporizer temperatures get above 365F.

And if your marijuana is heated to 400F and above, you’re almost certainly inhaling vaporized harmful compounds as well as harmful combustion byproducts.

Using a quality vaporizer, experiment with incremental changes in digitally-controlled vaporizer temperatures and discover a new world of cannabis taste, smell, and psychoactivity!

When I first used a premium vaporizer to inhale Chocolope marijuana, there was virtually no taste, only a little vapor, and no marijuana smell.

I missed that feeling of smoke going down my throat, making my head feel like someone hit it with a sledgehammer, and coughing. I missed the taste and smell too.

About two minutes after I inhaled the vapor, I was soaring on a vape high much different than when I’d smoked Chocolope.

It was clearer, more uplifting, and lasted longer than the combustion high.

Plus, I’d used only a fraction of what I usually loaded into a bowl. I got a sweeter high, and used less Chocolope.

The next day, I again put Chocolope into the vaporizer and set the digital control to 405F.

This temperature is the uppermost, non-combustion vaporizer temperature range because it vaporizes THC, CBD, CBN, and most of marijuana’s aromatics and other compounds—but stops just short of combusting the marijuana, so you don’t get harmful combustion byproducts.

This marijuana experience was much different from the day before.

In fact, my final Chocolope marijuana vaporizer experiment tally showed I’d found five specific temperature settings or ranges that each produced unique vaporization ratios of THC and non-cannabinoid compounds, and I got a markedly different kind of high off of each setting.

Simply stated, the unique power and benefits of vaporizing are: you don’t get combustion toxins; you control what cannabinoids you inhale; your high is clearer and more diverse; you use less marijuana; you increased security because there’s less marijuana odor; you use marijuana vaporizer digital temperature control to create an almost-infinite variety of marijuana inhalation and psychoactive experiences.

Read this vaporizing marijuana versus smoking article that contains other interesting facts about smoking versus vaping cannabis.