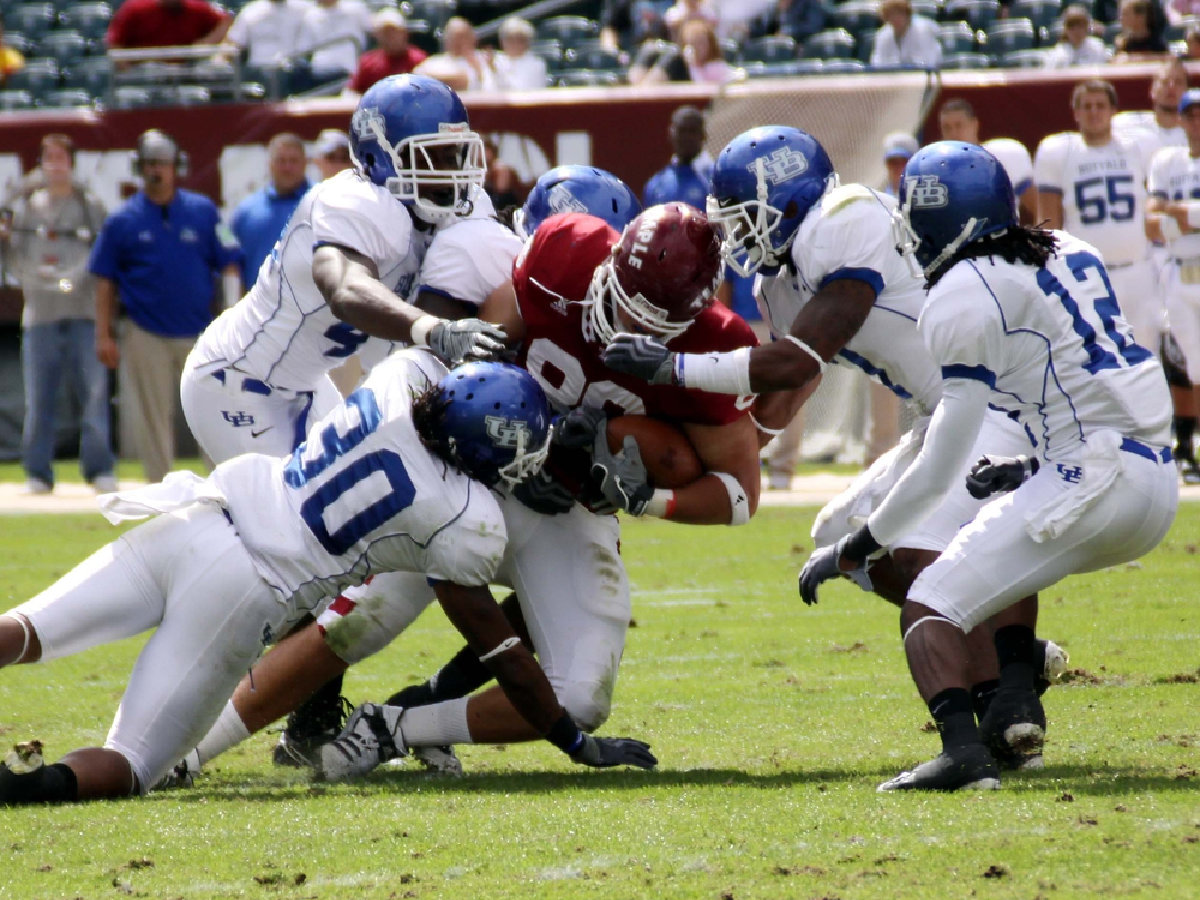 Marijuana use in the NFL helps players overcome injuries that are part of the game.
By Steve Davis | Published: January 26, 2016

The Denver Broncos and the Carolina Panthers will soon face off in Super Bowl 50.

And you can bet that many players on both teams use marijuana. As you’ll see later in this article, NFL players are a good business opportunity for marijuana growers.

Why do NFL football players use marijuana?

In fact, marijuana is the safest medicine football players can use to treat injuries caused by playing professional football.

Under the labor agreement NFL players operate under, the NFL only requires one drug test per year for players who haven’t gotten arrested or otherwise had noticeable problems with drug use.

Better yet, (from the perspective of NFL players who use marijuana) is that the one required drug test has to take place during the off-season, from April to August.

The strategy marijuana-using NFL players employ is to avoid using marijuana in the off-season until after they’ve been drug tested.

The lax drug testing protocols don’t obscure the fact that marijuana use in the NFL is prohibited by NFL rules for players.

Official NFL policy says players should not use marijuana at all at any time, even if they reside in states like Washington, Colorado, California, or Michigan where medical marijuana and in some cases recreational marijuana is legal under state law.

The NFL hides behind the fact that marijuana is still illegal under federal law.

It also makes unintentionally comical claims that marijuana is a “dangerous substance” and that “science” hasn’t established that marijuana would be  “good medicine” for NFL players.

This is especially off-target, given that playing in the NFL is obviously far more dangerous than marijuana ever could be.

In fact, the NFL is battling a massive class action lawsuit and individual lawsuits filed by thousands of NFL players who claim they suffer from repeated workplace concussions that cause chronic traumatic encephalopathy (CTE), a degenerative brain disease linked to repeated head traumas.

CTE leads to depression, along with early onset of Alzheimer’s and dementia.

Some former NFL players in their 40’s suffer from brain diseases usually found only in the very elderly. Many of these players commit suicide rather than trying to live with their brain injuries.

Several NFL players suffering from CTE, including now-deceased star San Diego Chargers linebacker Junior Seau, commit suicide by shooting themselves in the heart rather than in the head, so their brains can be studied to prove that CTE comes from playing in the National Football League.

Researchers who studied Seau’s brain said his brain had scarring and other trauma-related changes that choke brain function.

In Louisiana, for example, teenager Tyrell Cameron was playing football for Franklin Parish High School when he took a hard fourth quarter hit that caused a broken neck.

He later died at a hospital.

While marijuana use in the NFL is prohibited by the League, NFL team doctors are notorious for dosing players with dangerous opiate painkillers and other chemical drugs, including marginally legal and even illegal drugs, human growth hormone, and overly excessive amounts of harmful pharmaceuticals.

Former NFL players and their lawsuits allege that the NFL and its team managers, owners, and doctors commit “fraud” by denying that playing football is unavoidably dangerous and by condoning team doctors giving players dangerous drug cocktails that harm players.

The recently-released movie “Concussion” stars Will Smith as a whistle-blowing doctor who busts the NFL for covering up concussion syndrome was allegedly watered down by Sony Pictures to avoid angering the NFL.

“Will is not anti football (nor is the movie) and isn’t planning to be a spokesman for what football should be or shouldn’t be but rather is an actor taking on an exciting challenge,” Dwight Caines, the president of domestic marketing at Sony Pictures, wrote in an email on Aug. 6, 2014, to three top studio executives about how to position the movie. “We’ll develop messaging with the help of NFL consultant to ensure that we are telling a dramatic story and not kicking the hornet’s nest.”

Regardless of the NFL’s official stance against marijuana, former and current NFL players say that as much as 60% of the League’s 1700 players use cannabis medicinally and/or recreationally.

Fortunately for players, the NFL doesn’t do much to proactively seek out and eradicate player marijuana use.

But if a player gets in trouble with marijuana or other issues off the field due to an arrest or questionable incident, the NFL does institute a rigorous drug testing and counseling program, and there’s the possibility of being suspended from play if a player continues using marijuana.

NFL stars including Ricky Williams, Randy Moss, and Tyrann Mathieu have suffered professionally due to the League’s reaction to marijuana use in the NFL.

In a sport where dozens of players are tagged for DUI, assault, wife-beating, and other crimes, the NFL punishes marijuana users more harshly than it punishes players who commit violent crimes or alcohol-related crimes.

Cleveland Browns receiver Josh Gordon was suspended for an entire season for marijuana use, but former Baltimore Ravens running back Ray Rice only got a two game suspension for hitting his fiancé and knocking her unconscious.

New England Patriots quarterback Tom Brady only got a 4-game suspension for allegedly obstructing an investigation into whether his team deliberately tampered with game balls in the Deflategate scandal.

The suspension was later nullified, and Tom Brady is lucky he didn’t get caught using marijuana… the punishment for using a safe natural medicine would  have been much worse!

The League slightly adjusted its marijuana use in the NFL policies in 2014.

The new NFL marijuana policy makes it less likely an NFL player would be suspended or fired for marijuana violations, and it increased the amount of blood cannabinoid levels that trigger a failed drug test.

Marijuana is a prophylactic and an antidote for brain injuries. It’s also a muscle relaxer, anti-inflammatory, anti-depressant, pain reliever, and sleep aid.

These benefits explain why marijuana use in the NFL is so prevalent.

So why is the NFL so far behind the times when it comes to liberalizing its marijuana policies?

“When you watch a NFL game, you can almost get drunk just watching. It’s every other commercial—Bud Light, Coors Light, hot girls and cheerleaders, everyone having a good time glamorizing alcohol. The NFL is obviously in bed with alcohol. If they think it’s an acceptable drug for adults to use and its players to use, why in the world would they think marijuana is unacceptable, and why in the world would they want to punish their players for it when it’s objectively safer?”

We also have to wonder if the NFL is in bed with pharmaceutical companies.

An ESPN study showed that a huge percentage of NFL players have taken prescription opiods in ways that could be considered excessive.

Drug addiction is a big problem in the NFL because of these practices, players say.

According to published reports, retired NFL receiver J.D. Hill “received hundreds, if not thousands, of pills from trainers and doctors, including but not limited to NSAIDs, Codeine, Valium and Librium. No one from the NFL ever talked to him about the side effects of the medications he was being given or cocktailing. He left the League addicted to painkillers, which he was forced to purchase on the streets to deal with his football-related pain, a path that led him to other street medications. He eventually became homeless and was in and out of 15 drug treatment centers for a period of over 20 years until overcoming his NFL-sponsored drug addiction.”

These problems include early dementia, depression, crippling headaches, and loss of memory

McMahon said he was addicted to prescription painkillers, but kicked pharmaceuticals by using medical marijuana in his new home state of Arizona.

The former quarterback said he’s interested in investing in the marijuana industry.

If you’re a marijuana grower, marijuana use in the NFL presents a golden opportunity.

One of my grower associates worked hard to make a connection with an NFL player.

Then he worked with the player to breed, grow, and process marijuana strains best-suited for helping players overcome their injuries and perform better.

He developed a high-CBD strain for players who wanted cannabidiol medical effects, as well as other cannabis strains that gave players relief from pain, stress, insomnia, swelling, and brain trauma.

The grower’s contact with the initial NFL player turned into a lucrative arrangement.

“NFL players have unique reasons for wanting to use marijuana,” the grower said. “They don’t want to rely on inhaling combusted bud because it affects respiratory performance. I provide them cannabis products that give them the recreational and medical benefits they want, without negatively affecting their on-field performance.”

The players appreciate the safety and security of only having to procure marijuana from one person.

And the grower even created a boutique situation in which he found safe ways to deliver marijuana to players out of town for away games.

Many football players are millionaires, so the grower got tips and other compensation that went far beyond regular per ounce prices.

He was invited to NFL player parties and entourage events, and given comp tickets to games… which led to even more cannabis connections and more sales.

The grower told us that out of an approximately 50 player roster for the NFL team he has inside knowledge of, at least 17 regularly use marijuana.

“They don’t use cannabis on game day or for a couple of days before a game,” the grower reports. “After a game, they use it immediately, because they’re hurting. Several players told me it’s a ‘performance-enhancing drug’ because it helps them be more creative in their playbooks and routes.”

If you watch the two classic NFL football movies—North Dallas Forty and Any Given Sunday—you see how NFL culture includes team-sanctioned use of alcohol and other dangerous drugs.

It’s time for the NFL to get in step with marijuana science and changes in public attitudes and laws.

The simple fact is that marijuana use in the NFL is a blessing for players, and keeps them healthier and happier so we watch players who are properly medicated with Nature’s kindest herb.