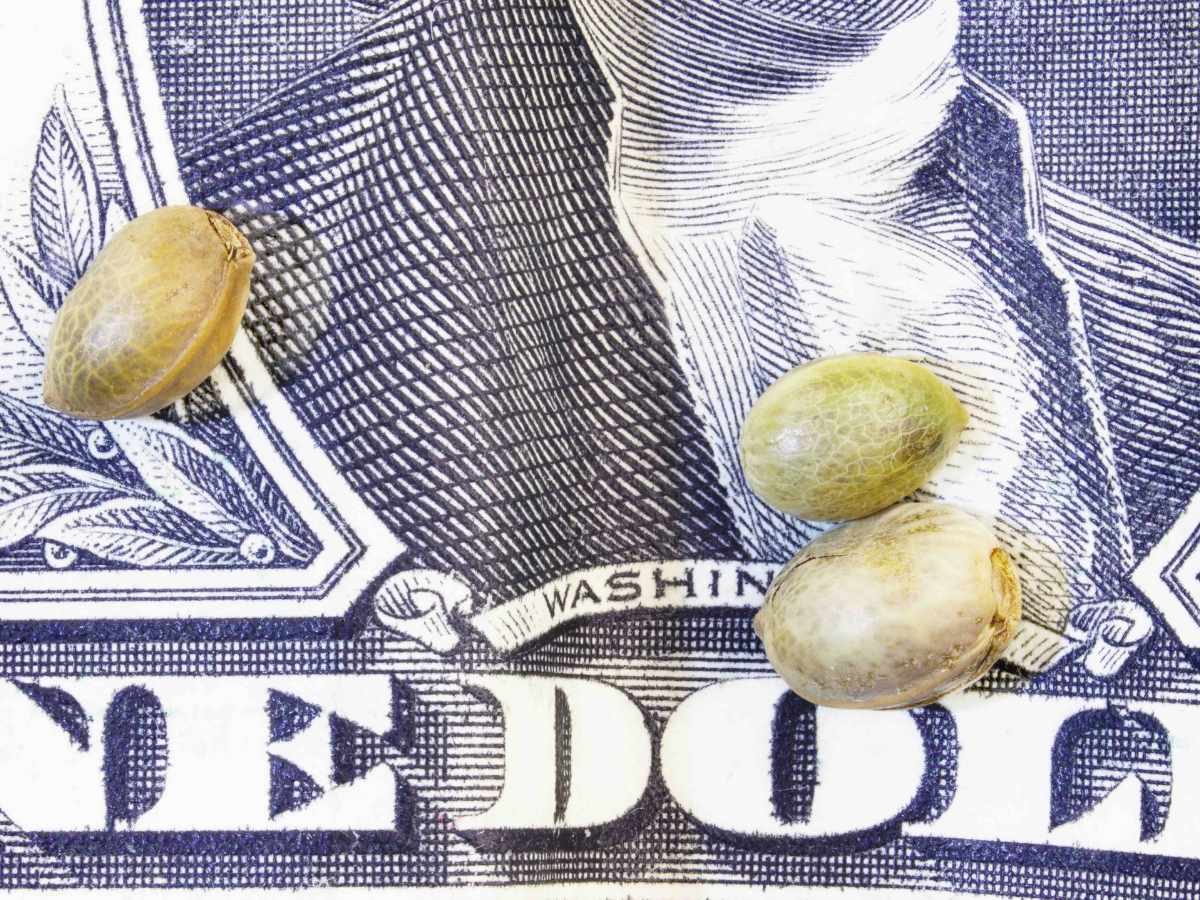 Even though I’m still working in my outdoor garden as my outdoor grow op enters its final weeks before harvest, I’m now getting ready for the launch of my autumn indoor grow season.

The first thing I do when planning my new indoor season reminds me of being a child opening presents on Christmas Day. I have stainless steel containers stuffed full of packets and vials of cannabis seeds, and I pour them out, sifting through the valuable stash of rare genetics I’ve bred myself or procured from other breeders over the past decade. Within these packages there are many fond memories and surprises, as I haven’t memorized the dozens of cannabis seed strains I possess, nor have I managed to find the lost yet incomplete list I wrote a couple of years ago.

When I’m sorting through the seeds, sometimes it feels like running into an old friend I haven’t seen in years. Or a new friend I only met once and wanted to get to know better, but who I haven’t had the opportunity to reconnect with.

So, imagine my delight when on this trip down marijuana memory lane, I unearthed a seed vial marked “Colombian Gold landrace.” I had a vivid memory of how a grower friend headed to the former danger zone that was the South American nation, risking his safety to visit an area loosely controlled by anti-government rebels. He paid a hefty guide fee to campesinos, who led him through muggy thickets of thorns and deadly snakes to reach a 2000-foot elevation hillside that had once been cultivated by cannabis smugglers in the 1980s and early ’90s.

His guides had casually mentioned that pit vipers and boa constrictors were “hanging around,” before handing to my friend a machete and advising him to “look for ground or leaves moving like a wave — it could be a snake.”

After a long hike, during which the fear of slithering creatures took second place to the painful annoyance of constantly scratching and slapping away biting insects, his guides threw their packs down and smiled, pointing to a hillside that appeared to have faint traces of having once been cleared for agriculture. “Oro Colombiano,” the guides informed him. Colombian Gold.

From a distance, he saw nothing that resembled a cannabis plant. But as he wandered up the hillside, he began to notice the towering, feral landrace cannabis plants. Some had long, thin floral clusters that smelled like oregano and spices. He jumped for joy when he found flowers with ripe seeds.

According to the campesinos, the entire hillside (approximately 11 acres) had once been a thriving cannabis plantation run by drug cartels, until it was discovered and burnt to the ground by government soldiers who believed cartels were in bed with anti-government rebels.

The campesinos suggested the government was still surveilling the hillside, perhaps via satellite or flyovers by aerial camera aircraft, which is why locals don’t actively cultivate the landrace cannabis growing there. They do, however, venture out at night to harvest buds and gather seeds, and the feral Colombian Gold flowers are used medicinally in teas, as topical medicines, or smoked.

Those Colombian Gold seeds were the tiniest either of us had ever seen, only slightly larger than poppy seeds. I bought 10 of them from my friend at a price so high I’d rather not reveal it, especially because I’ve yet to germinate them and get down to the the joys of growing this rare find.

My friend never grew them, either. He sold the remaining seeds for a profitable sum to a Dutch seed breeder, who later used the Colombian genetics in several important breeding projects to create strains identified as Skunk #1 and Jack Herer, as well as several Haze hybrids. The Dutch breeders also told him the Colombian landrace plants grew very tall; didn’t respond predictably to photoperiod manipulation in grow or bloom phase; needed a warm, humid environment; and exhibited problems with hermaphroditism.

However, the buds did produce the classic, psychedelic Colombian Gold high, and after several generations of breeding to improve the strain, the Gold was stable enough for use in connoisseur hybrids that retained the best of Colombian Gold landrace, while being more manageable in height and photoperiod triggering.

I am yet to grow my Colombian Gold because of their apparently tricky grow characteristics of being feral landrace habituated to outdoor growing in an equatorial region. I want to grow them indoors, which I’ll admit seems somewhat foolhardy, given their likely height, or in a greenhouse, which I don’t have. On the other hand, I’m well aware that I need to work with them before they lose viability.

One rare set of seeds I rediscovered in my collection are from the Mazar-i-Sharif and Kandahar regions of Afghanistan. They were sold to me by a US soldier who risked a dishonorable discharge and court-martial for consorting with civilian, non-combatant Afghans who are part of the traditional cannabis-growing, hashish-making culture that has existed in the country for centuries.

My military friend, who joined the service to get physically fit and learn weapons and ordnance skills, says he never was a “true believer” in the “righteousness” of the American military presence in the Middle East. He said if somebody invaded America and the population fought back, it would be the same as what the Afghans have done in the past five decades when invaded separately by two of the world’s superpowers, Russia and the United States. According to my friend, Afghan poppy and cannabis growers feel that the threat to their form of indigenous agriculture — as well as to their life and safety in Afghanistan — has predominantly been from Russian and US invaders, as well as the puppet Afghanistan governments these regimes have paid off.

Even before Afghanistan was invaded by the Soviet Union in 1979, then by the USA in 2001, the American government and the United Nations Office on Drugs and Crime tended to look the other way when it came to the local cultivation of poppy and cannabis, although it’s long been claimed that the international trade in hashish and opium from Afghanistan is the driving force behind the worldwide drug epidemic.

During the Russian occupation of Afghanistan, lasting from 1979 to 1989, Afghan resistance fighters and warlords grew and sold cannabis and opium to fund their guerrilla war against the Soviet intruders. At the same time, the CIA armed and trained these homegrown and foreign Islamist resistance fighters to oppose the occupying Russians. President Ronald Reagan even famously hosted some of these Afghan rebel leaders at the White House in 1983.

By the time my buddy arrived as a soldier in Afghanistan in 2012, the country was war-ravaged and one of the poorest nations on earth — despite the fact that the US war effort has resulted in multinational mining corporations plundering the country’s vast multi-trillion-dollar mineral wealth. Sadly, the US War in Afghanistan, which started in 2001, continues today — America’s longest war and second costliest after World War II, with no end in sight. He claims US forces in Afghanistan are hunkered down in defensive positions rather than actively trying to root out the Taliban and other militant Islamist groups, although special ops raids and drone strikes are ongoing.

And yet, tens of thousands of acres of hardy indica and Kush cultivars are grown and processed there annually, with most of the end product making its way to European hashish markets.

The seeds my soldier friend smuggled into the USA from his tour of duty were on the opposite end of the size scale from the Colombian seeds — some were larger than a BB.

He alleges that from what he’s seen, front-line American combat soldiers won’t consume Afghan hashish when they’re on duty in Afghanistan, because it impairs their combat and operational abilities. He’d tried the potent local hashish only a few times, but only when he was out of Afghanistan on extended recreational leave. But he would never use hashish in country. As a member of an operational unit that had already several times engaged the enemy and suffered casualties, he felt that being high, even days before a battle, might slow down his reaction time and distort his reflexes, judgment and eyesight, and perhaps get him or fellow soldiers injured — or worse.

When I cultivated some of the Afghan seeds and sampled the ridiculously gooey and crippling buds that grew from them, I agreed that inhaling hashish made from these buds would be a big mistake for anyone who might be facing a highly stressful situation — like a war.

The plants had very dark-green leaves and were single cola, with three to five side branches that make them ideal for sea of green growing. The buds were so resinous that it looked like someone frosted them with icing, and the main cola was between two and three inches in diameter. They ate nutrients like they had the munchies, sending off a big burst of terpenoid perfume when I watered them with Bud Candy and Nirvana.

The scent was way too strong for my carbon odor filters and was dominated by a spicy, skunky, fruity combination that changed as the season progressed, with scent coming early in grow phase and becoming frighteningly powerful in bloom phase.

There were two phenotypes, with one taller than the other and taking slightly longer in bloom phase. The shorter phenotype was ready to harvest after only 51 days in bloom, which is short for a photoperiod strain.

One of my future breeding goals is to grow the Colombian and Afghan strains at the same time and cross-pollinate them, creating a strain that combines the soaring, bubbly high of Colombian Gold with the dangerous, crippling high, short bloom phase and heavy yields of the Afghanica.

Another packet of seeds I’m pleased to have as part of my collection came to me from Canada. Cannabis Cup winner God Bud was bred by a British Columbia-based seed company, Jordan of the Islands. I’ve cultivated it twice indoors and it grew out as a delightful indica strain that finished in 59 days, producing nuggety, sticky, tight, purple-blue-scarlet buds that provided a powerful high more energetic than a typical indica.

Interestingly, non-feminized God Bud seeds produce female plants that show their gender within two weeks after bloom phase starts, while the male plants take much longer to reveal gender. This is reverse to the usual bloom-phase gender morphology, in which the males show sex earlier than the females.

For those among us who are yet to start their seed collection, here’s how to get the genetic storehouse ball rolling. Once you’ve begun to build your own cannabis seed bank genetic collection, you’ll have plenty of great grow seasons for years to come!