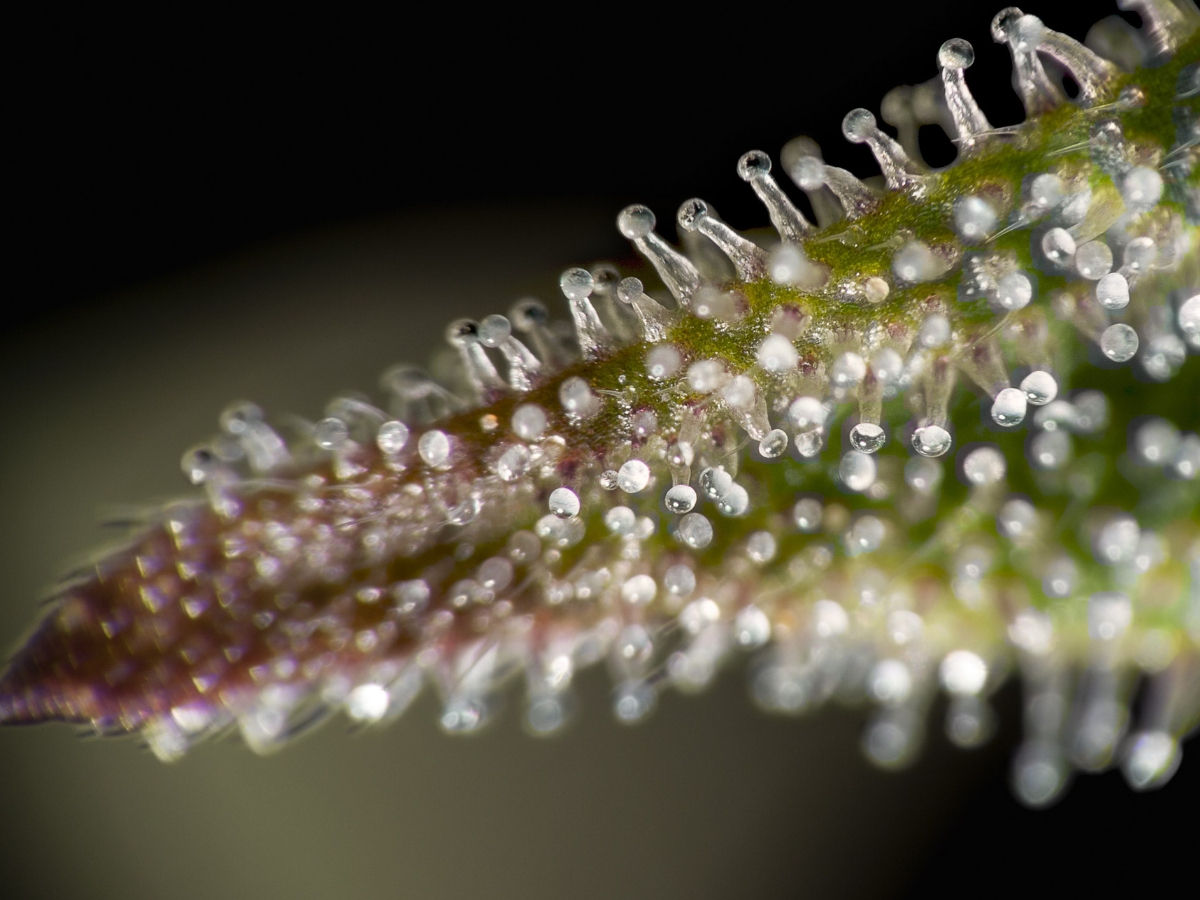 Much like being struck by lightning (or so I imagine), the sudden realization hit me a couple of years ago that I’m not just a cannabis grower, I’m also a trichome farmer.

Trichomes are tiny appendages that grow from the surface of many plant species. Cannabis growers refer to trichomes as resin glands, and they’re the primary plant structure that produces and stores cannabinoids, terpenoids and flavonoids.

There are three types of cannabis trichomes: bulbous, capitate-sessile and capitate-stalked. Of these, capitate-stalked are the trichomes particularly admired in cannabis macrophotography. They tend to resemble a clear golf tee with a round, smooth, translucent golf ball on top.

Most growers measure harvest success in terms of bud weight, but I’ve come to believe that an equally useful measure of success is the ratio of trichomes to bud surface area. The more cannabinoids, terpenoids and flavonoids your crop produces, the more valuable your harvests are, especially if your intention is to produce cannabis concentrates.

I first saw the reality of trichome weight versus bud weight when I was vaporizing buds from different strains that had been recently harvested, dried and cured.

Vaporizing at the same temperature and using a gram of bud for each test, I noticed that some strains delivered 10–20 inhalations of thick vapor, plus a killer high, whereas the same weight amount of bud from another strain provided far less vapor and a less intense high.

The buds had been dried and cured uniformly, with 64-percent relative humidity inside the stainless steel storage container of each strain, so it wasn’t variant moisture content that created the vapor volume differences.

I got out my magnifying device and examined buds from the different strains as I conducted my vape tests. It became obvious that buds from my customized Gorilla Glue crosses were lavishly loaded with resin glands compared to the other strains. More resin glands per gram of bud equals more vapor for longer — it was that simple.

Armed with this knowledge, I figured out some subtle yet powerful implications for my cannabis growing, consuming and processing. For instance, instead of wanting to grow the biggest, heaviest buds, I now wanted to grow the biggest buds that produced the most resin glands per bud.

I refocused my strain selection and breeding choices on cultivars that gave me the most resin glands on the buds I tended in my grow op.

I’d long been using various phenotypes of Gorilla Glue as pollen donors to breed with female plants of my favorite strains that aren’t necessarily known for intense resin production. Most sativa-dominant strains have fewer glands with smaller resin heads. By breeding sativa strains with Gorilla Glue, I got the best of both worlds: A sativa high and buds crowded with resin glands. 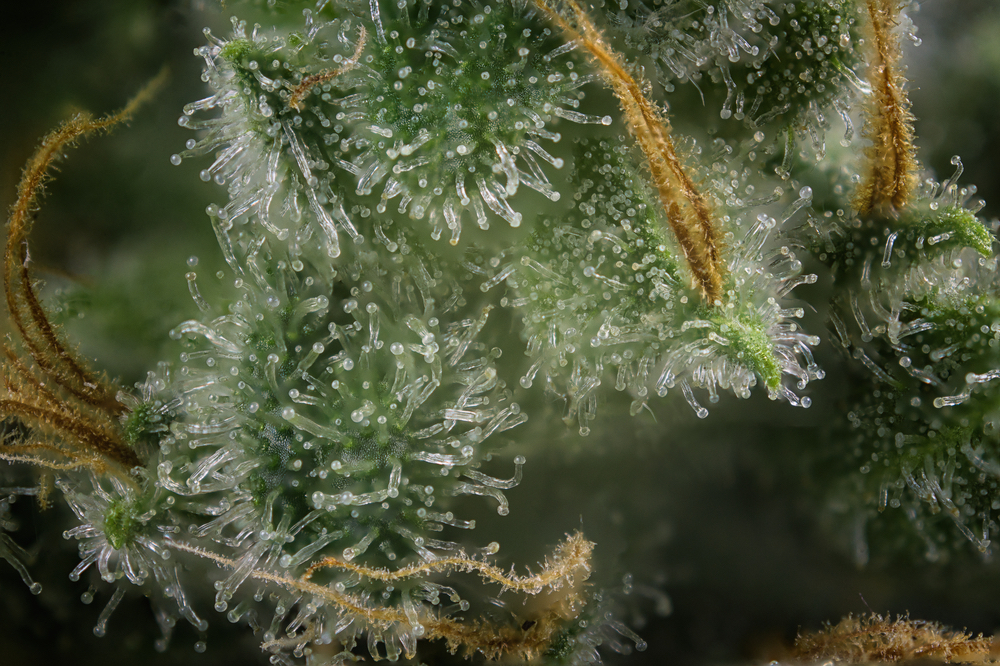 Battle Of The Icons: Super Glue Vs. THC Goo

Finding authentic Gorilla Glue cannabis cultivars as clones or as seeds is difficult. The origins of this strain have been the subject of intense debate, but many growers agree that cannabis breeder Joesy Whales and his partner Lone Watie originated the strain’s foundational lineage by accident, when hermaphroditic pollination created seeds from an unintended cross of Chem’s Sister (also known as Chem Sis) and Sour Dubb.

The gossip surrounding Gorilla Glue includes debates about which version of the strain (Original or #4, for example) is the archetype, whether a Chocolate Diesel strain was involved in the breeding process, and whether the cannabis industry should use the name “Gorilla Glue” at all.

Indeed, in March 2017, the manufacturer of the polyurethane adhesive Gorilla Glue filed a lawsuit against Whales and his seed company GG Strains in the US District Court for the Southern District of Ohio. The lawsuit accuses Whales and company of trademark infringement, dilution and unfair competition.

According to court records, Gorilla Glue, Inc. and GG Strains settled the trademark infringement, with GG Strains agreeing to phase out the name of its Gorilla Glue strain series, as well as the use of any gorilla imagery, verbiage or similarities in its branding by September 2018. GG Strains has indicated that the names GG1, GG4 and so on will be substituted for the previous naming convention.

While the settlement between GG Strains and Gorilla Glue, Inc. doesn’t necessarily dictate that the many other seed companies and dispensaries using the name Gorilla Glue must also stop using the name, what it does mean for growers is that now is the time to procure authentic Gorilla Glue seeds and clones before it’s too late — but this isn’t an easy task.

Cannabis seeds reseller Seedsman offers several different Gorilla Glue strains from a variety of breeders. These particular strains have grown out to be coated in sticky resin and appear to have the other primary characteristics of the legendary Gorilla Glue lineage. But beware of other breeders offering so-called Gorilla Glue strains — these are likely not the real deal.

I’ve spent a lot of time tending to Gorilla Glue plants because, after growing and scrutinizing hundreds of strains, authentic Gorilla Glue has the densest percentage of resin glands I’ve ever seen. Runners-up include Hash Plant and White Widow, but Gorilla Glue out-resins them all.

When I’ve processed buds from dozens of strains to make such concentrates as dry sift, bubble hash, kief and rosin, it quickly becomes apparent that Gorilla Glue gives me more resins per bud, and larger resin heads than those of any other strain I’ve grown. There are often so many resin glands present on this strain that you can hardly see any bud leaf surface at all, and the buds look like they have a white cloud on them. Big resin heads are generally the most valuable resin glands, whereas smaller resin heads are often immature, with lesser quality cannabinoid, flavonoid and terpenoid content. 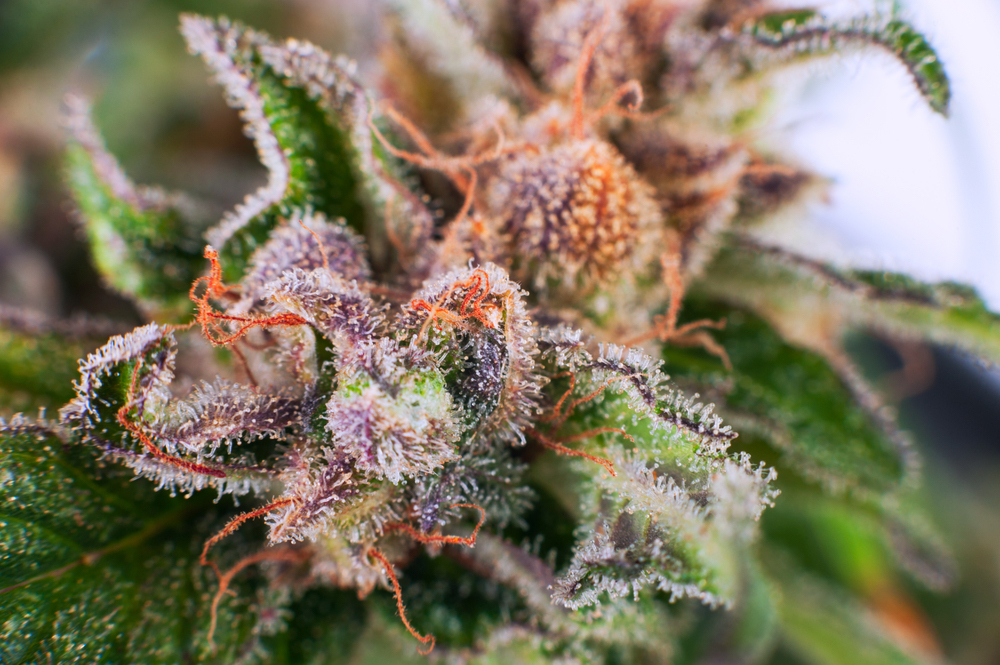 Measuring Your Success As A Trichome Farmer

Along with a visual examination to determine which strains are producing the most resin glands, processing buds into concentrates is another useful way to measure resin gland percentages per ounce of bud.

Processing identical bud weight from different strains in a Bubble Magic bubble hash extraction machine, Gorilla Glue gives me 15–35 percent more bubble hash per run than any other strain — even strains whose buds clearly looked gooey and sticky. Similar benefits amass when I do dry sift and kief runs with a Pollinator extraction machine.

When you make dry sift, bubble hash and kief using standardized conditions, you soon discover which strains give you the most resin, the most resinous glands, and the highest resin percentage per gram of bud. When making bubble hash, true Gorilla Glue delivers buds with a larger percentage of huge resin heads compared to other strains.

If you have money to burn, you could hire a professional laboratory that uses high-pressure liquid chromatography, gas chromatography, thin-layer chromatography or supercritical CO2 extraction to provide the precise measurements of individual cannabinoids, terpenoids and flavonoids in your buds.

This testing can be expensive and isn’t always practical, but nonetheless provides precise data to help you ascertain the relative percentage, amount, quality and type of active compounds produced by your cannabis strains.

Tricks And Tips For Trichome Farmers

Your cannabis breeding goals, along with your grow op goals and methods, will likely change when you start to view yourself as a trichome farmer rather than just a fat bud cultivator.

You’ll no longer consider bud size as the only crop success metric — that is, when you notice that five pounds of buds with lower amounts of resin ended up producing fewer cannabinoids and active compounds than were provided by 3.5 pounds of sticky Gorilla Glue or other high-resin strains.

Request lighting manufacturers provide you a radiation chart showing the full spectrum and intensity of wavelengths produced by their grow lights. And remember, when using high-UV lights in your grow op, always take care to shield your eyes and skin from the harmful ultraviolet energy.

To further boost cannabinoid and terpenoid production, be sure to use our proprietary flushing/feeding/lighting program.

You’ll also maximize your trichome yield by harvesting at the right time. A quick rule of thumb is that when at least 15–20 percent of your resin glands have become cloudy, amber, or start to fall apart at the slightest touch, your trichomes have ripened as much as they’re going to and it’s time to cut.

After you harvest, preserve your trichomes using appropriate drying and curing techniques, being careful not to ruin the delicate trichome structures through rough handling or lighting that’s too intense. Resin glands are more fragile than eggshells. If they break open, their precious cannabinoids immediately degrade.

As a dedicated trichome farmer who grows cannabis for processing into high-value concentrates, you’ll have your work cut out for you. However, because you aren’t retailing buds, you don’t have to manicure, trim or otherwise worry how attractive your buds will look on dispensary shelves.

Making bubble hash washes contaminants and debris from your buds, leaving behind the trichomes you can gently wash again using reverse osmosis water to remove all but the most microscopic traces of contamination. The trichomes in the dry sift and kief you produce will be cleaner than the buds they came from.

And when you take a pound of bud and extract an ounce or two of concentrate from it, you’ve greatly reduced the amount of space required to store your cannabis products, and made your cannabis less odiferous, more concentrated, more portable.

Perhaps the main takeaway here is that cannabis breeders should aim to create strains that give the heaviest harvest weight and the largest amount of resin glands per gram of bud, rather than just relying on yield alone as a measure of success.

Weed World Web: Unusual Places To Purchase Cannabis-Related Gifts
How Nixon Established The War On Drugs As We Know It