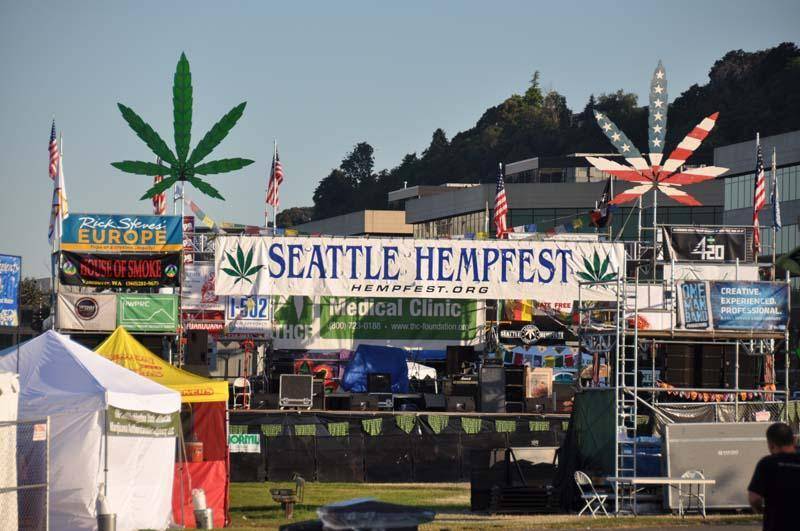 By Subcool | Published: August 26, 2011
Hempfest never gets old. The positive energy always fires up my activist side, while all of the hippies rub off on me and leave me with a full heart and a smile on my face.

Long before we got close to the event, we could smell the sweet aroma of the herb that everyone had gathered to celebrate. It was a really nice afternoon and the sun was shining, but a cooling breeze was blowing off the bay and swirling the music around as we walked into the park.

The path in was a wall of people coming and going from the event. I am always amazed at how huge Hempfest crowds are. We walked around a bit, ran into Ngaio Bealum, and stopped by the TGA booth to enjoy the sunset with few bowls of Dank.

The next day, I got an early start because I am always really excited and a pretty hyper person. I love to meet and greet and wake and bake with just about anyone I see. Everyone is so cool and in such a great mood. I can’t count the number of people I smelted that day with my full melt bubble, but lets just say a large number of folks now have a good story to tell.

I made up the purest Apollo-13 water hash I could and was rewarded by friends stopping in mid-sentence after having just one bowl. I captured some video during the day (watch at the bottom) and took a good many pictures, but I spent most of the time talking with fans and signing books and rolling treys and tee shirts and even bongs.

The jams were really good and you can hear a sampling in my video. Over the weekend, a few dozen bands perform on the many stages and I have to say I really liked just about all the bands that we heard on the main stage. Later that day, we went to hear some of the speakers and got to see Seattle’s mayor give a speech. He actually did a good job and it was quite the trip to see the mayor of a major American city on stage in front of thousands of people actively smoking cannabis as he openly welcomed us to the city.

The thing I saw that was different this year was the huge amount of commerce that went on at this event. There was a much larger group of people serving food, and a much wider variety—hell you could order up a caesar salad and grilled cajun salmon at one booth.

I am much more of a burger guy and as I walked up to one booth to get some munchies. The guy asked MzJill if she was with High Times because she was dressed in one of her green outfits with all her adornments. We told him that I was Subcool and she was MzJill and the people behind the booth all started praising us for our genetics. The owners were medical patients who had grown out our Flav and the Vortex.  They wouldn’t even let me pay for my meal, which blew me away most of the day just thinking about it. I know cops are known to get free food for their service, but a Cannabis breeder? Far out man!!

Everyone seemed to be doing a brisk business and even the ATMs had lines of people standing in front of each one. The economy may be down, but our culture seems to be thriving. Apparently a large number of Americans dig weed. While the politicians are too busy ruining our economy, the counter-culture has dug in and we are doing quite well because of the plant.
While its kinda taboo to talk about, there was no shortage baked goods or flowers at the event. People were doing what it takes to survive and I am a huge supporter in that.

I got a cool shot of one daring entrepreneur holding up a sign as people walked buy advertising his goodies. The stupid part is, because the government refuses to acknowledge our culture and cannabis economy, they missed out on untold revenue. I think regulation was on everyone’s minds and one of the speakers I captured on video spoke about it. Free weed is a great dream, but the reality is that taxing the sale of cannabis goods can and will generate funds to help rebuild our countries infrastructure one day.

Sunday was another great day and just as busy. We passed out about four jars full of TGA flowers to card holding patients on the house. And even though the TGA booth was hoping like mad, everyone was polite and gave up their spots in the crowded booth so others could meet and speak with MzJill and myself. Ed Rosenthal came over and hung out, and as usual, I did my best to medicate him into the stratosphere.

TGA’s Washington State reps Rob and Rose and their crew who did such a great job for us were impressed that Ed hung out so long and signed books for everyone. I had so much fun working with them that next year we plan to double the booth size and sponsor the festival with a nice donation.

I would like to thank all of the volunteers, without whom this event could not be held. As the sun set on a glorious day, they were looking at several days of cleaning up and taking down everything.

I hope to see everyone next year!