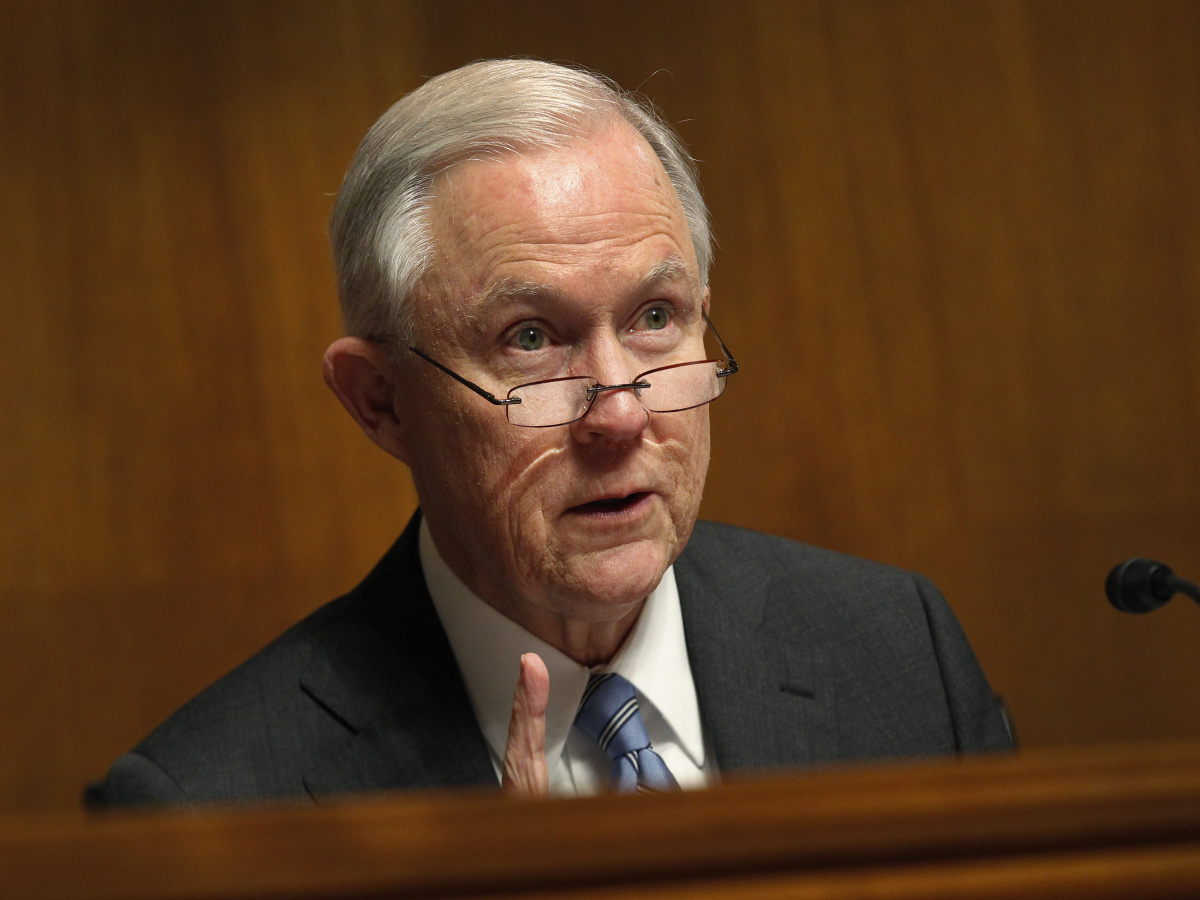 Marijuana hater Jeff Sessions, a fierce drug warrior and former Senator from Alabama who is now President Donald Trump’s attorney general, made news this week by threatening to attack the legalized marijuana industry.

Now news of a different kind is threatening to get Sessions fired.

Top Democrats such as Senator Elizabeth Warren are demanding that Sessions resign because Sessions is reported to have had secret contacts with Russia’s top spy in the United States, and to have lied under oath about the contacts.

This amid ongoing suspicion that Trump, his family members, and people (including Jeff Sessions) who worked for Trump’s 2016 presidential campaign had potentially traitorous contacts with Russian spies and Russian President Vladimir Putin.

Most Americans are unaware of the full scope of Trump’s dealings with Russia, or the dangerous brilliance and brutality of Russian president Vladimir Putin.

For a full and fascinating dossier about Trump’s deep involvement with Russia (involvement that Trump denies), read this report.

It is in this context that the contact Sessions had with Putin’s top man in the United States is so revealing, and so damning.

Start with the fact that during the 2016 campaign, Trump publicly asked Putin to hack Hillary Clinton’s emails.

A few weeks later, thousands of hacked emails from Clinton, the Democratic National Committee, and Clinton’s top advisors were leaked to WikiLeaks and other media sources.

The emails embarrassed and hurt the Clinton campaign, which had been working hard to suppress criticism of Clinton for using a private email server and failing to properly handle classified information sent by email.

In the week before election day, F.B.I. director James Comey made a surprise announcement claiming that new Clinton emails had been discovered which could reveal criminal wrongdoing.

Comey’s announcement was widely seen as an unprecedented move designed to influence the election in favor of Trump.

A few days after his first announcement, Comey admitted that the new emails contained no evidence of wrongdoing.

But by then, the damage had been done.

The Clinton campaign and investigative journalists have repeatedly stated that Trump and/or his inner circle, business associates, and some campaign staff, had secret and likely illegal contacts with Russian spy agencies and Putin to influence the U.S. election.

This comes in the context of ongoing concern that Trump’s refusal to release his tax returns, as well as other Trump actions, indicate massive business dealings with Russia.

President Donald Trump has gone out of his way to praise and defend Russian president Vladimir Putin, an ex-KGB agent known as one of the wealthiest, most brutal world leaders.

As you can see in the documentaries in this article, Putin is a billionaire ex-covert agent affiliated with right-wing Russian motorcycle gangs, the Russian mafia, rogue military cadres, terrorism against his own people, ethnic cleansing, and war crimes.

Trump hosted the Miss Universe pageant in Moscow in 2013, making $20 million in a deal set up by Russian billionaire Aras Agalarov.

Trump made millions selling a massive Florida mansion to a Russian billionaire suspected of massive corruption.

Trump has borrowed hundreds of millions of dollars from Deutsche Bank, a German institution under investigation for laundering Russian mafia money.

The United States Department of Justice and other agencies are investigating Deutsche Bank, and have discovered that not only President Donald Trump, but also his daughter Ivanka, her husband Jared Kushner, and Kushner’s mother are clients of the bank.

Donald Trump Jr. stated during a 2008 business conference that “Russians make up a pretty disproportionate cross-section of a lot of our assets.”

An explosive dossier created by a British intelligence agent claims Trump has extensive business interests in Russia, and that Putin is blackmailing Trump with video of Trump engaging in sexual escapades with hookers in Moscow.

You can read the dossier here.

One of the people who helped provide information for that dossier was later found murdered!

Trump’s choice for U.S. Secretary of State, who at the time was head of Exxon Mobil, is a Putin fanboy.

Former Exxon boss Rex Tillerson and Putin have been trying for years to complete a half-TRILLION dollar Russian oil and gas exploration deal.

But the deal was roadblocked by the Obama administration, which placed sanctions against Russia because of its illegal, brutal invasion of sovereign countries.

After Trump was elected but before he was sworn in as president, his then-national security advisor Mike Flynn had contacts with Russian spies and government officials, including Russian Ambassador Kislyak.

Flynn, a former military general, has been in trouble because of his Russian contacts before.

He’s reported to have had illicit contact with the Russians while he was President Obama’s director of the Defense Intelligence Agency.

Flynn was either fired or forced to resign from his job with the Obama administration.

So, it was a surprise that Trump chose him to be his National Security Advisor.

But a few weeks ago, after Flynn was discovered to have lied to Congress and apparently even to administration officials and Vice President Mike Pence about contacts with Russian officials while Obama was still president, Flynn was forced to leave the Trump administration.

And the hits just keep on coming:

Ross and Vekselberg were leaders of the Bank of Cyprus, said to be a bank where $30 billion in Russian mafia money was laundered or hidden.

When the bank fell apart in 2013, Ross and Vekselberg set up a restructuring scheme that gave Russians majority ownership of the bank.

Sessions responded: “I’m not aware of any of those activities. I have been called a surrogate at a time or two in that campaign and I did not have communications with the Russians.”

But the New York Times broke the story that Attorney General Jeff Sessions had at least two undisclosed contacts with Kislyak in 2016, while he was actively campaigning for Trump and while he was a member of the Senate Armed Services Committee.

He’s reported to have had meetings Kislyak before last year’s election, when Russia was running a cyberwarfare campaign to hack the U.S. election.

Mike Flynn was also said to have been in contact with Kislyak before Trump was sworn in as president.

But Kislyak is a lot more than just an “ambassador.”

Intelligence operatives describe Kislyak as being at the top of Russia’s spy apparatus in the USA, acting as a recruiter in Washington, D.C. trying to subvert U.S. citizens to become spies for Russia.

“After lying under oath to Congress about his own communications with the Russians, Jeff Sessions is not fit to serve as the top law enforcement officer of our country and must resign,” she said. “There must be an independent, bipartisan, outside commission to investigate the Trump political, personal and financial connections to the Russians.”

Sessions has so far refused to resign.

Republicans in Congress who spent years investigating Hillary Clinton in failed attempts to find her guilty of criminal wrongdoing now refuse to investigate the Trump team’s ties to Russia.

Republican Rep. Devin Nunes, who was a member of Trump’s transition team, said Trump and his people did nothing wrong—even though investigations are ongoing and far from complete.

Sessions is a long-time marijuana hater who spent much of his time in the Senate spreading reefer madness lies.

In the few weeks since he became America’s attorney general, Sessions has put fear into the legalized marijuana industry by saying he’d enforce federal marijuana prohibition law regardless of state laws legalizing marijuana.

And Sessions has continued to spread his reefer madness lies.

Just this week he claimed that marijuana creates violence.

Sessions was the first senator to back Trump’s presidential bid.

He stood by Trump even in the worst of times… when a damning videotape emerged of Trump bragging that while married he sought adulterous affairs with married women, and that he grabbed women “by the pussy” without their permission, Sessions defended Trump.

The fall of Sessions is a blow to Trump, but if  Sessions is fired or forced to resign, it will be a huge win for the marijuana community, and for America as a whole.