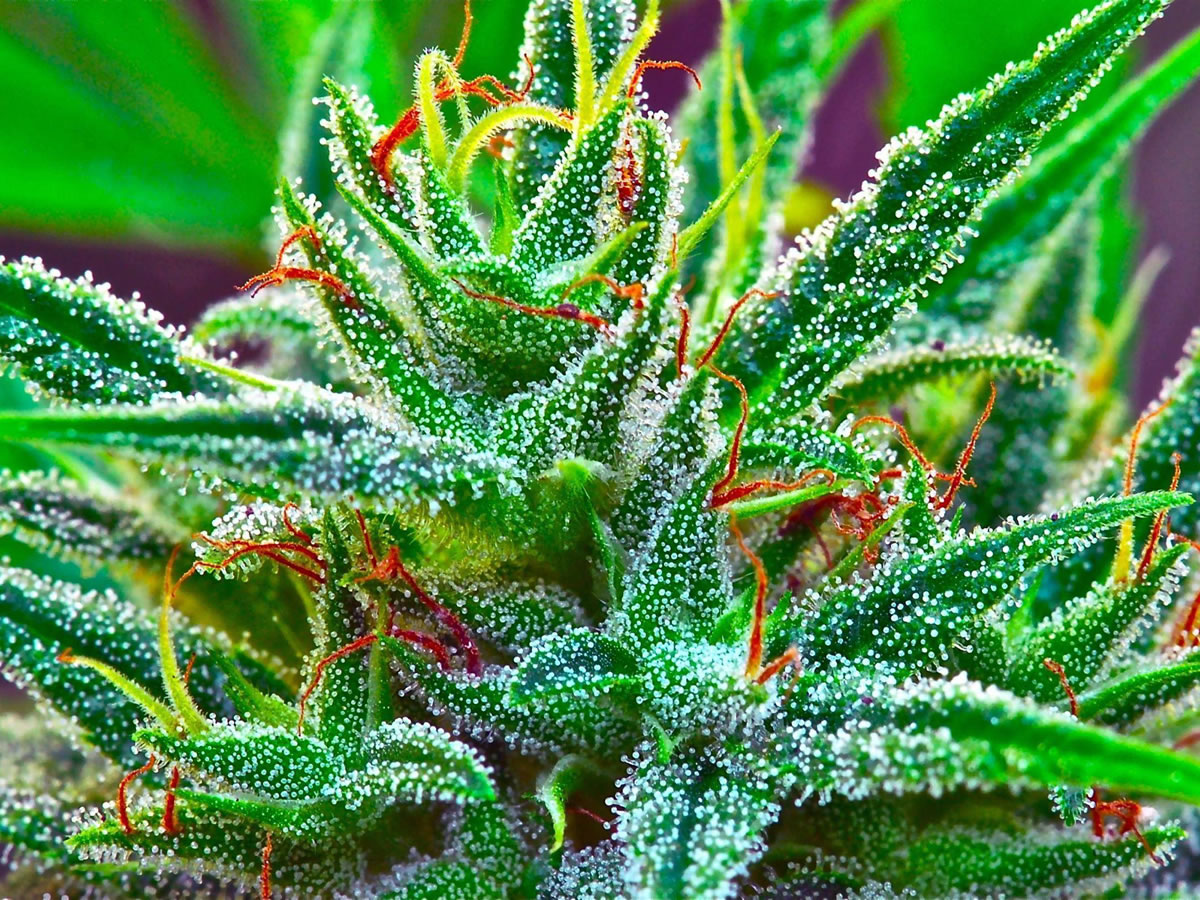 Full, big resin glands loaded with THC are what we want more of on our marijuana flowers.

The important news today is when you feed the earth element silicon to your marijuana crops as potassium silicate, you get verifiable, significant increases in THC, crop health, growth rates, and productivity.

Let’s take a look at the details…

By end of grow phase, marijuana plants grown in soil have exhausted their supply of silicon.

And in some cases, soil silicon is not easily absorbed by marijuana plants.

In your soilless hydroponics garden, silicon is totally unavailable because it’s not in your root zone at all, unless you specifically add it as “silicate.”

Your marijuana plants may grow adequately without silicon, which is the main reason silicon hasn’t been deemed an essential element that must be included in hydroponics base nutrients formulas.

But evidence shows that without feeding added silicon to your crops, you’re missing out on healthier, stonier, more productive plants.

When your medical marijuana plants intake silicon as potassium silicate, they build it into their cell walls.

Silicon-enriched cell walls provide structural support for your plants so they have sturdier stalks and stems that support larger buds.

You know how much damage that sucking/biting insects such as mites, thrips, aphids, and other insect attackers can do to your marijuana plants.

Silicon-enriched cell walls make it harder for predatory insects to feed off your marijuana plants.

Silicon (as potassium silicate) is absorbed via roots and transferred from cell to cell inside the plant, where it becomes a powerful potentiator of your marijuana’s metabolic processes, acting as a balancer and facilitator that increases uptake of other nutrients, fuels photosynthesis, and filters pollutants such as salts and heavy metals.

When your marijuana plants are silicon-enriched, they’re better able to resist gray mold, powdery mildew, and other pathogens that cost growers millions in losses every year.

For you as a marijuana grower, the important news is that potassium silicate increases the formation, sturdiness, size and resin content of THC glands.

Your resin glands are the primary reservoirs of THC in your plants, but they’re extremely vulnerable to rupture and other deterioration caused by heat, drought, predators, intense light, humidity, molds, mildews, nutrients problems, and rough handling.

Added silicon boosts the size, hardiness and resilience of your buds and resin glands, giving you heavier, more potent buds that are better able to resist forces that reduce crop quality and weight after harvest.

When you enrich your medical marijuana plants with potassium silicate, you extend the shelf life of their resin glands and THC.

This means your crops retain more of their potency, taste and aroma for longer periods of time. Your crops are more valuable to you and others who depend on your buds.

Silicon as Silicate: Get The Right Solution for Your Marijuana Crops

Now that you’ve seen how adding silicon to your marijuana feed program is a proven way to get healthier plants and more-valuable buds, you’re surely wondering what’s the best way to get silicon into your plants.

Marijuana plant scientists determined that potassium silicate is the preferred form of silicon for marijuana plants.

Using potassium silicate has the added benefit of providing potassium to your crops– as you’re aware, potassium is a marijuana bud booster.

Without getting into too much chemistry, let’s understand that other forms of agricultural silicon, such as sodium silicate and lithium silicate, cause problems for your plants.

In fact, excess sodium is already a big problem for marijuana plants growing in soil or soilless hydroponics systems.

Marijuana scientists describe this as “plant salt stress,” and they point out that it slows marijuana growth, reduces yield, and can even kill your plants.

Salt stress is a problem indoors and outdoors.

Indeed, one of the main harms of industrial agriculture fertilizers, and the use of desalinated water, is that it spreads excess salts that create soil toxicity.

Remember that silicon must be provided in amounts appropriate for your plants, and in the right form. As with other nutrient elements you feed your plants, an excess or deficiency of silicon can cause crop problems.

So it’s not enough to just throw silicates into your feed program… you must send in the right amount of potassium silicate, and it’s best if the potassium silicate is provided to you in a properly-manufactured liquid solution.

As a hydroponics marijuana grower, you only have a handful of product choices when trying to add silicon to your medical marijuana plants.

Note also that Botanicare is now owned by Scotts Miracle-Gro, so it’s best to avoid all Botanicare products.

You already know why any product with sodium silicate is not good for your medical marijuana plants– too much salt.

I called Botanicare, Dyna Gro, Dutch Master and Grotek to ask how their products work for marijuana, but they refused to talk about marijuana growing.

When I reached a technical advisor at Advanced Nutrients, I learned more about their potassium silicate product called Rhino Skin.

I had already learned potassium silicate is best delivered as part of a liquid solution rather than a dry powder or granule.

Apparently, Rhino Skin is an upgraded version of a previous hydroponics product, Barricade, that works with the bloom phase nutrients system based on base nutrients that guarantee optimized pH and maximum nutrients absorption for your plants.

He had over the years tried all the potassium silicate formulas on the market, and decided that his best bet was to use Rhino Skin as a root feed and as a foliar spray.

GrowDaddy uses potassium silicate for soil and soilless grows beginning in mid-veg phase and continuing through bloom phase, especially for plants like Kush that grow best with a heavy dose of hydroponics nutrients, and any plants known to produce higher than average THC gland percentages.

As a root feed, I use potassium silicate per the manufacturer’s directions. As a foliar spray I use zero ppm reverse osmosis water, half-strength Wet Betty organic surfactant, and one eighth to one quarter strength Rhino Skin.

When I’m finished mixing, the foliar spray averages between 110-170 ppm.

I use this spray, sometimes in combination with other supplements during the latter two thirds of my grow phase and the first two weeks of my bloom phase.

Foliar spraying potassium silicate is a preventive against powdery mildew, mites, thrips, aphids, heat, gray mold and other stress that attacks your plants from the outside.

It also transfers potassium silicate into your marijuana plants at a crucial time…when they’re forming buds and resin glands.

This strengthens your glands, increases the density and development potential of your bud structure, and gives you more THC.