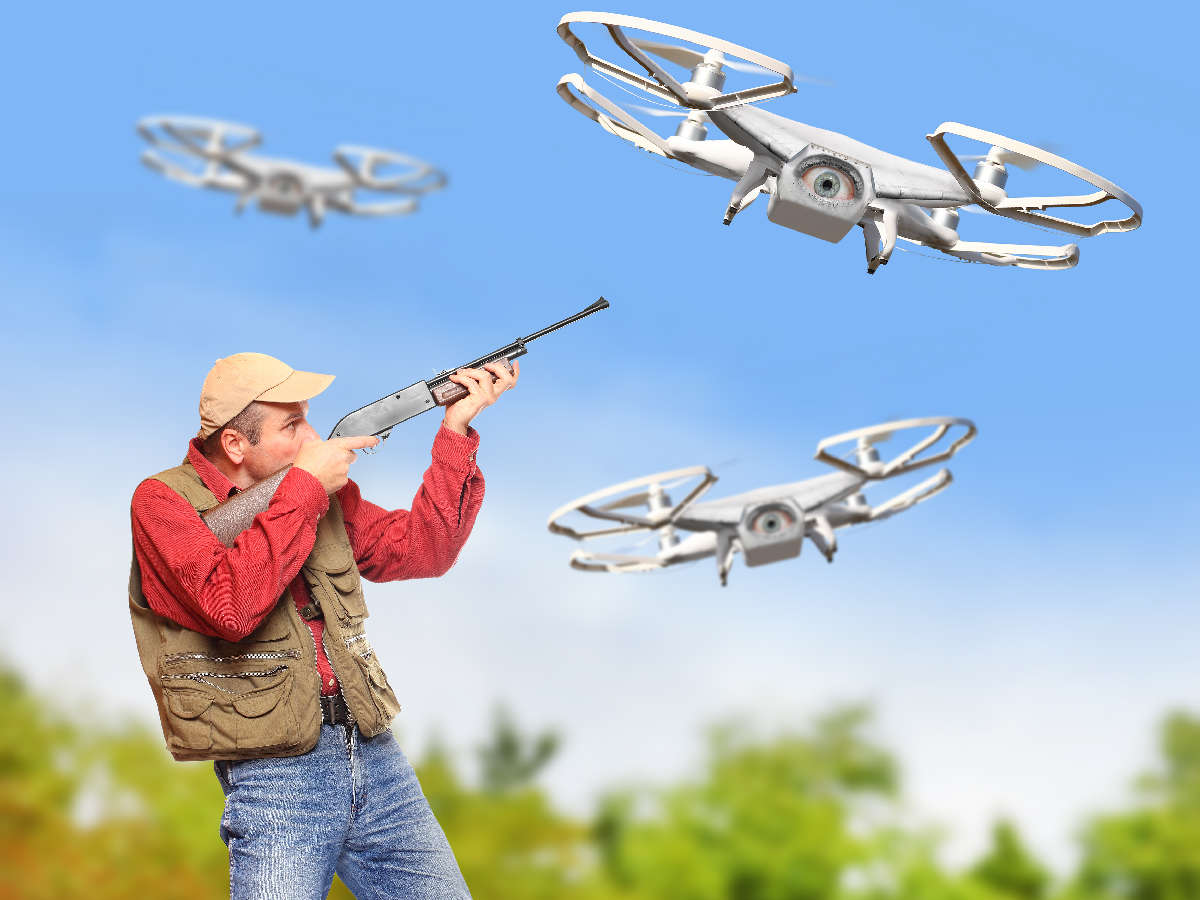 Marijuana growers want to shoot drones, but should they?
By Nigel Salazar | Published: June 7, 2017

More and more marijuana growers want to shoot drones because drones are used by police and civilians to spy on indoor and outdoor marijuana gardens.

Drones were created using taxpayer money given to military researchers and private corporations.

It was meant to establish and outsource new mobile surveillance and attack technology used by military, police, other government agencies, and private industry to invade our privacy and wage wars, including the drug war.

Civilians who buy drones play into this, especially when they share drone video and other imagery– becoming unpaid accomplices in the government-corporate surveillance apparatus.

Marijuana growers want to shoot drones because rippers and drug war police easily use drones to look for marijuana gardens indoors and outdoors.

Inexpensive surveillance drones can monitor vast amounts of area and it’s easy for them to see outdoor marijuana plants.

Aerial drones can be as small as a bird.

Some are small enough to fly through an open window.

Drones are equipped with night vision and infrared radar so they can see in the dark and see through walls to detect indoor grow ops.

They’re operated by people far away, so there’s no accountability.

They often have electric motors, so you can’t hear them.

Drones can be hacked, armored, and weaponized with mace, Kevlar, grenades, shotguns, and missiles.

The multibillion-dollar drone industry bribed both political parties to force the FAA to draft weak regulations allowing amateur drone operators to do whatever they want with their supposedly unarmed drones, as long as their drone activities comply with unspecified “community standards” that have yet to be defined, and probably never will be.

Government agencies such as local police, DEA, National Security Agency, FBI and Homeland Security don’t deny they’re using small drones, and some even brag about it.

We’ve had several reports from marijuana growers, especially outdoor growers, about drones being used to bust them or rob them.

But you can’t legally shoot drones.

It’s a federal crime to shoot down any aircraft, and the FAA includes drones in that designation.

A Kentucky homeowner shot down a drone that was hovering ten feet above him.

He was threatened by the civilian drone operators, and then arrested by police.

The same has happened to other people who shoot drones.

And of course, if you shoot a drone operated by police, expect trouble from law enforcement.

Even if the drone isn’t being operated by police or thieves, drones scare wildlife and people, invade privacy, and can create hazardous situations.

In almost all cases, they’re annoying, invasive, potentially dangerous technology operated by people who have no concern for manners or privacy boundaries.

One interesting fact is if you want to shoot drones to protect your privacy and marijuana garden, you don’t have to use a gun.

Most drones used by police, rippers, and others who are invading your privacy or looking to bust you or rob you are fragile machines.

It doesn’t take much to knock ’em down.

They can be brought down by a shotgun blast of very fine pellets (such as Number 12 birdshot), by BB guns, pellet guns, and even a water gun.

You don’t need a sniper rifle or machine gun to shoot drones.

In fact, testing has shown that even skilled shooters have a hard time hitting small drones using big firepower weapons.

At least one company makes high-tech “drone-busters” that shoot drones with signal-jamming frequencies that disrupt the drone operator’s ability to control the unit.

Drone-busters are expensive, not available everywhere, large, obvious, and somewhat difficult to use.

The good news is they can shoot drones down from at least half a mile away, if not further.

Another company makes a device to shoot drones that captures them with a net and lands them with a parachute.

Marijuana growers have to carefully weigh potential problems that come from drone surveillance… or if they shoot drones.

He camped out near the grow site to see if the drone operators would come to rip him off.

He was armed, and the drone operators were nerdy, unarmed, would-be thieves.

He held a gun on them, followed them back to their vehicle, photographed their license plate and identification, and warned them that if they narked him, came back to rip him off, or continued to operate their drones, he’d make them suffer.

Two weeks later he saw the drone above his crop again.

He had no choice but to harvest early and get the hell out of his grow site.

The hidden downside of drone technology is it allows any little, nosy twit with enough money to buy a drone to be a nark or thief, or to spy on you even if you’re in your own home.

Be sure to watch the videos embedded in our articles so you get even more information:)

Fire Up the Dabs at California’s Chalice Festival in July
Can We Get Rid of Reefer Madness Attorney General Jeff Sessions?