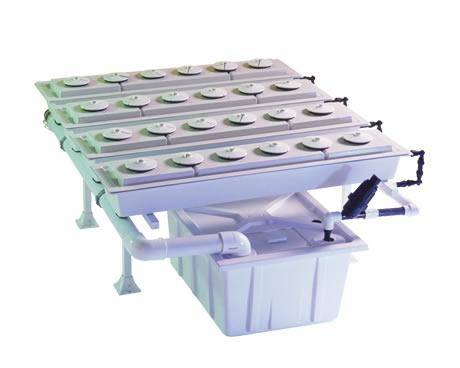 Articles discuss how most hydroponics nutrients aren’t designed or tested for hydroponics marijuana. Which means of course those nutrients give you slower growth and smaller buds than you could be getting.

Other articles talk about hydroponics manufacturers, magazines and distributors who openly discriminate against our marijuana community. Like when you go to a Maximum Yield Indoor Gardening Expo and they throw you out because you’re a marijuana grower.

Some readers misinterpreted the articles as one-sided or unfair. But hey, there’s nothing unfair about reporting facts and standing up for the hydroponics marijuana community.

But for those of you who want me to report nice things about hydroponics companies that discriminate against marijuana growers, this one’s for you…

News flash: some of the companies guilty of not designing or testing nutrients for marijuana are also part of the hydroponics industry group that discriminates against marijuana growers- but they do make some useful hydroponics products.

Unless you want to build one of your own ebb and flow tables, you rely on manufacturers. Most ebb/flow table manufacturers build inferior units.

Two of the best ebb and flow device manufacturers are Botanicare and General Hydroponics.

Both companies make several sizes of ebb/flow tables that are easy to set up, and are great for producing marijuana. They’re priced from $300 to more than $1000. And they work well.

Similarly, Botanicare and General Hydroponics make quality aeroponics units for full crop cycles and for cloning. Again, you get various configurations that suit hobbyist growers all the way up to professional growers.

If you’ve ever tried to build your own aeroponics system, you know it’s very hard to get it right. Botanicare and GH units are reliable and long-lasting. They use high-quality delivery devices, pumps, plastics and fittings. Unless you are a DIY genius, I recommend you buy them from General Hydroponics or Botanicare, rather than make them.

I’ve seen a lot of amusing YouTube DIY videos where self-made flood and drain, aeroponics and other types of hydroponics systems are leaking, causing electrocution risks, not delivering proper nutrient flows, etc. Companies such as Botanicare and General Hydroponics have the engineering, fabricating and manufacturing power to make better units that are safer, more efficient, guaranteed, and last longer.

Ebb and flow/flood and drain and aeroponics systems are great ways for you to start cannabis seeds or clones, and grow your marijuana plants all the way to harvest. They send extra oxygen and nutrients into your roots more efficiently.

When ebb and flow or aeroponics systems are properly tuned, they give you increased clone success rate, about 10-15% faster veg phase growth, and incredible marijuana yield, especially in Sea of Green, hydroponics tent chambers, and similarly smaller-sized grow ops.

Ready to look into aeroponics and ebb/flow/flood/drain devices? You’d do best to contact Botanicare and General Hydroponics direct. They make the devices and their people know best which devices are going to suit your marijuana growing needs.

But don’t tell them you’re growing marijuana or they’ll hang up the phone in a hurry.

You might get lucky and get “acceptable” yields with GH and Botanicare nutrients. But maximum marijuana growth rates, harvest weight and THC percentages only come when you use Advanced Nutrients.